I have worked with SAP Payroll for many years across a dozen different clients, and you can always count on issues at the beginning of the year due to year-end. It could be a number of things such as printing W2s, preparing to send 941’s, or other error’s with particular employee data, and there are a variety of reasons for these issues including the following:

This year, I ran into a issue with one of my clients in regards to their W2 Summary report from Tax Reporter not matching the Payroll Reconciliation report for two particular states and their Withholding Taxable Bases (/701) and wanted to share my experiences with this. I always receive requests to talk about SAP Payroll from colleagues and thought that this might be a good one to share since it is that time of year where everyone is going through this. In this scenario, the client wanted an explanation on why it does not match, and like just about everything else dealing with Payroll it was an urgent issue that needed to be dealt with yesterday.

At first glance, dealing with these type of issues is overwhelming because it seems like you are looking for a needle in a haystack and sometimes that is exactly what you are looking for. My first step to resolving these issues is to always recreate the error, so in this case I was looking at the Payroll Reconciliation Report (PC00_M10_REC) as well as Tax Reporter for the W2 (PU19) Summary and directly compainge them to understand the amount of the imbalances. I typically ask the client to send me a screenshot of the selection screen for how they are running each of these and then run it myself. This will help me rule out silly mistakes like bad data entered on the selection screen, and also to make sure I am comparing apples to apples.

So I ran the Recon Report as instructed with one of the key’s being setting the ALV Layout to 1_TOTALVIEW in order to get a high level overview. Here was the results.

Next, I ran tax reporter like this in order to see the W2 Summary

This gave me the following result on the PDF output for the incorrect state.

So the discrepancy was 7,213,542.72 – 7,193,708.14 = 19,834.58 which is a significant discrepancy. In order to dig further into this, I needed to look at the employee level. So I adjusted multiple fields on the Payroll Reconciliation selection screen including the following: 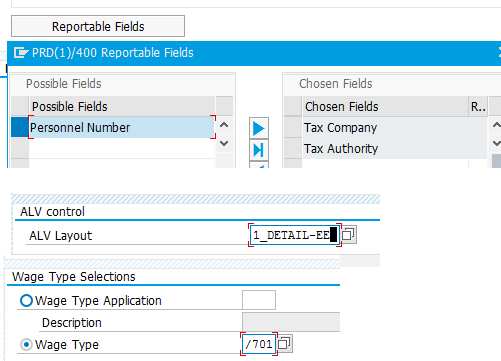 Once I ran the report and it finally outputted, I looked into and tried to see anything that stuck out with individual employee’s. What I found in this particular scenario was that there were many employees that had a “Retro Period Adjustment” that included retro’s from 2013 that occurred in 2014. I also saw that they already had a retro in 2015 that went back to 2014 that was also causing a discrepancy. As a result, the system adjusted the /701 and this was not reflected in Tax reporter for the W2 as they were expecting, although it was included in the Payroll Recon report.

In order to “prove” this to my client on how the system was behaving, I did a proof of concept by testing and showing this one one particular associate by comparing tax results in transaction PC_PAYRESULT.

As you can see, the taxable base was decreased by $0.32 with the retro. Now, I ran the W2 for this associate via PU19 in test mode and saw that the amount in the W2 still reflected the original amount instead of the new amount because I was using consider payroll results up to 12/31/2014.

Many times with Payroll issues it is more about proving that something is correct or proving how the system is behaving and that is what I found to be the case here. We can easily include the new year amounts that contain a retro by adjusting the date on the selection screen in Tax Reporter. In order to “prove” that there was nothing off with the payroll data and that the Payroll Reconciliation Report did match I advised the client to the do the following:

After these rows are removed, the total amounts matched the W-2 Summary exactly as they were expecting. I also let the client know that they always have the option of adjusting individuals via the Year-End workbench and using IT221 YANA entries on 12/31/2014 if that is what they wanted to do and I could help them as necessary.

One other consideration if you are dealing with an issue with Tax Reporter and an imbalance, be sure to check out the Tax Reporter log for rejected employees – I saw a separate issue with a different Tax Company for this same client where one employee had a negative balance in a field that they should not (Due to GTL and being on leave for most of 2014) and as a result Tax Reporter excluded this employee in the totals which cause the numbers to be off. In this case, you can either do an IT221 entry or a manual entry directly in tax reporter to clear the balance and allow them to get picked up in the production run of Tax Reporter. I opted for the manual entry directly in tax reporter because the wage types to be adjusted were not currently in the permissibility table for Infotype 221, so as small configuration change would be required which would cause a further delay in processing.

Overall, the big lesson learned for this client was that you have to be careful with retro-calculations across years and understanding the impact of these retro-calculations and how the system treats them. I have seen issues with this same concept in the past, with one of my clients coming to me with an issue due to someone who had a retro back 10 years causing a big issue. Unless you have a very strong payroll team who understand the impact and implications of retro calculations, a good rule of thumb is to not allow prior year retro’s and you should change the “Earliest retro acctg period” in the control record at the beginning of each year unless it is absolutely necessary and if you know what you are doing.

Nice article.  For tax reporter user, don't forget to set your W-2 filing date!  This is the date that you used to create the W-2 electronic filing to the Feds.  Retroactive changes across the filing date get pushed into a W-2c or next year's W-2.  It may seem obvious but, W-2s you send out to employees or file with authorities should be done in productive mode.  Pay attention to the "Consider payroll results up to" date you use on the selection screen.  To reinforce what Imran said, look in the log.

Thanks for your reply and additional insight on the W2 filing date as well as making sure to run in productive mode! That is great feedback.

Good Blog. We dont not use Tax Reporter yet because we use ADP program for w2. But we are in process of implementing it.

Thanks for the comment. Best of luck in your Tax Reporter implementation. Some friendly advice is that when you have a tax reporter issue, more times than not it is either user error, bad payroll data, or an SAP issue.

Great post.  Highlights how to logically and analytically breakdown an issue to resolve it.

Please not also that Spinifex IT tool provides Essy Balance Report to identify differences between results and what is reported on the W-2.