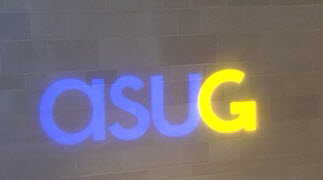 Day 1 started with ASUG Manager of Communities Danny Pancratz saying that in 2014, ASUG maintained an active year-round community with 400+ webcasts and 14K face-to-face meeting registrations, a 50% increase from 2012.  He introduced ASUG CEO Geoff Scott, who is celebrating his one year anniversary as ASUG CEO.

Geoff explained that ASUG has added SAP back on the ASUG Board and the SAP ASUG Board member is Steve Shander.  Steve is Chief Customer Office for SAP.

Geoff talked about “getting the most out of your ASUG investments” through ASUG Volunteers’ donating their time to ASUG.  He also said ASUG is a “community of ideas”, “a source of inspiration and innovation”.  Even though SAP is running the “run simple” campaign, our jobs are not simpler with a changing landscape with the cloud becoming more relevant.  SAP’s run simple is an aspiration, but our journey to get there won’t be easy, according to Geoff.

Geoff said that we are “okay” but we can be better and that ASUG is an independent user group.  The ASUG foundation is education, networking and influence and ASUG is good at education and networking.  He said we need to become more “agents of change” rather than “messengers of change”.  Making the Babe Ruth baseball analogy that if you want to swing for the fences, you can’t hit singles, the ASUG strategy for 2015 will be to bring in subject matter expertise and community advocation, targeting certain communities.

First ASUG has hired two community advocates – Sherry Meyer has joined ASUG to lead the HR community and Paul Kurchina has joined ASUG to lead various other communities.  In three years, Geoff expects to have 10 subject matter experts inside ASUG with more focused execution related communities.  He also explained that in February ASUG will hire someone to lead Events.  ASUG is also hiring someone to help the New York metro areas for chapter support.

“This is not the old ASUG” Geoff Scott stated; we want to become a benchmark SAP user group.  Also the ASUG BusinessObjects User Conference will happen this year but the dates/time/location are to be determined.

Next volunteers broke up into different groups such as chapter volunteers, “YRC” volunteers, and program committee volunteers.  I attended the program committee session.  Greg Capps facilitated the session where we discussed what went well, what went wrong, what could be better.  The abstract tool this year is new for ASUG Annual Conference and I thought it went well.  Kim Haschalk also explained this year she hopes to have better collaboration with SAP. 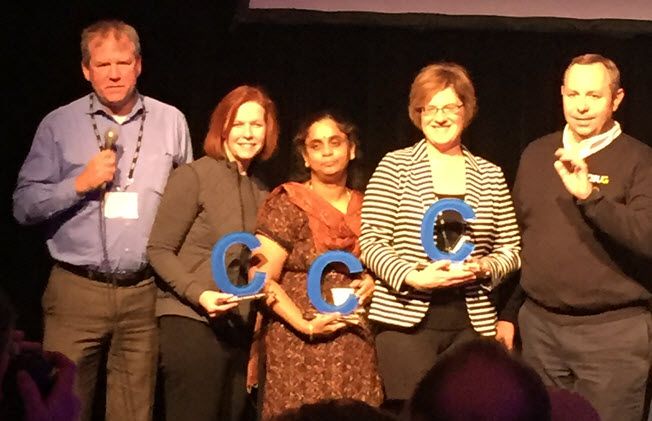 Pictured above is Joyce Butler, second to the left, and to the far right is ASUG CEO Geoff Scott.

I attended a few Influence sessions.  SAP’s Marco Dorn said that SAP Customer Connection is for improvement for mainstream investments and customer engagement initiative is for innovation.