As you might know SAP BW does not allow every possible character in character strings. An upload or activation can terminate in such cases. It occurs frequently with character strings where users (or interfaces) can freely enter text.

In this blog I would like to introduce such an ABAP Add-on which I developed. Please refer to my document Implementing an Add-on for Cleansing Character Strings for detailed implementation instructions.

Let’s have a look to a typical example: a source field contains “forbidden hexadecimal characters” (between HEX00 and HEX1F) which are usually not permitted in BW. 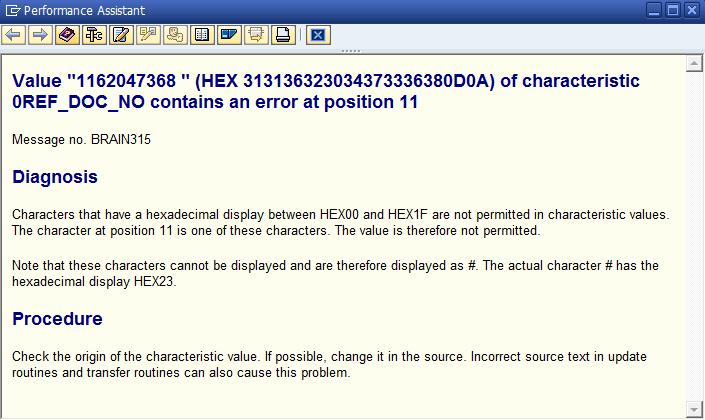 Please note by the way that ‘HEX23’ is a documentation error in message BRAIN 315.

In SAP BW the default allowed characters are:

You can choose between the following three options:

Option ALL_CAPITAL is mostly used and can be considered as the “best practice”. SAP does not recommend using ALL_CAPITAL_PLUS_HEX.

Validation of uppercase and lowercase are handled differently. The validation rules which were presented above are applicable for uppercase Characteristic values. The lowercase validation is less strict; only hexadecimal HEX00 to HEX1F are never allowed.

There are two additional exceptions:

The Cleansing Add-on is an ABAP Objects Class and is intended to be used in a Transformation Rule. The logic is based on two standard SAP Function Modules in Function Group RSKC:

Those Function Modules only contain “validation” functionality. The “cleansing” functionality is added in an RSKC compliant way. The Cleansing Add-on has an easy-to-use interface and can be implemented in any Transformation Rule for a character string using a Routine.

If you would like to read more about this topic, I can recommend reading the following documentation:

In this blog we discussed the possible issues with character strings. We had a look to the allowed and unallowed characters in the context of SAP BW. Furthermore, I introduced briefly the Cleansing Add-on. Please refer to my document Implementing an Add-on for Cleansing Character Strings for more information re. implementing this Cleansing Add-on and how to use it in Transformation Rules.

One of the not so fun to fix repetitive issue in BW. Yours will be a very useful add-on. Eagerly waiting for your updates.

Please check out my document Implementing an Add-on for Cleansing Character Strings for detailed implementation instructions. I look forward to receiving your feedback.

Thanks for this valuable contribution. Good working with you, must repeat that once again 😉

This looks great however when I implement and test in SE24 it does not work for me.  cl_rs_utilities=>is_ap_system is s private class in my system.  Working around that it dumps at with substring not allowed at   ASSIGN c_chavl(1) TO <chavl>. in both the uppper and lower case methods when an invalid string is encountered.  It doesn't seem to remove a ! in the first character of a string that causes problems but perhaps you have to add it to the list of invalid characters?

Please note that I replaced the attached file of document Implementing an Add-on for Cleansing Character Strings with an updated version 2. This new version is developed in SAP BW release 7.4 SP 11 and some minor issues (e.g. with class CL_RS_UTILITIES) are solved.

Please try the coding of the new version 2. If you still experience any problems, please inform me the release and SP level of your system. I would also like to know in which method(s) the problems occur. Thanks in advance.

What reason do SAP give for not recommending ALL_CAPITAL_PLUS_HEX? (and why, in that case, have they made it available?)

ALL_CAPITAL was at some point in time restricted and does not allow hexadecimal HEX00 to HEX1F for uppercase characteristic values anymore (for lowercase it was never allowed). ALL_CAPITAL_PLUS_HEX was introduced for backward compatibility reasons. However, SAP does not recommend this procedure because it can cause problems during further processing and reporting. Please refer to SAP Note 1075403 - Unallowed characters and ALL_CAPITAL for more details.

I suppose I'm asking specifically what problems might arise in further processing / reporting if I allow these characters. They would be in characteristics intended for display use rather than navigational...

Hi Sander, thanks for this clean and nice approach.

Using v2 and testing on routine input with value "E!" doesn't clean the exclamation and ends up with SID activation failure...

Any suggestion or testing on your side is welcome, I added extra code in the meantime...

By the way, what are AP Systems ? Analytical Platforms vs Business Suite ?