Hovercrafts, S4 HANA and a dog dressed as an AT-AT

I like Hovercrafts, I always have. As a 10 year old I remember watching amazed at these futuristic little fellas exerting effortlessly mastery over land and water – making mole hills out of the mountains that could not be overcome by car or boat. To a boy they were the pinnacle of what vehicles could be, what human endeavour could achieve, a real (if admittedly noisy) machine to rival the Bat Mobile or the AT-AT* 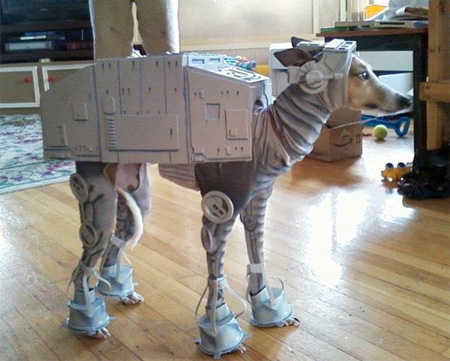 (*Technically this is a dog dressed up as an AT-AT but it should be sufficient to jog the memory).

Now some years later I believe that I may have seen another such leap in the achievements of man, this time not as an awe inspired youth in the Isle of White but rather as a slightly hung over man sitting (in a intriguingly small chair) at SAP FKOM in Barcelona. The name of this new hovercraft – S4 HANA – a long predicted new version of core ERP sitting atop SIMPLE architected table structures and HANA technology. For SAP this ‘return to its roots’ is the oft heralded destination for the HANA march that began a number of years ago and which is accompanied by the promise of SIMPLE data, SIMPLE FIORI interfaces, SIMPLE integration and a nice new logo.

But is it a hovercraft? Well possibly. For a Hovercraft for all its technological brilliance and its ability to conquer all terrain never really took off as a method of mass transportation. Don’t get me wrong, to say that hovercrafts are never used would be entirely erroneous but it’s fair to assume that few people reading this will be just about to nip to the jobs on a cushion of hot air and a flexible skirt. The problem with the hovercraft was that it solved a problem that was not high on anyone’s agenda. To illustrate the point, Christopher Cockerell the man commonly credited with the invention of the modern Hovercraft struggled to sell the concept, remarking that ‘”The Navy said it was a plane not a boat; the Air Force said it was a boat not a plane; and the Army was ‘plain not interested.

This is where I believe the parallel with S4 HANA can be drawn. For as I have said on previous blogs whilst HANA and now S4 HANA it is undauntedly clever and the ‘In Memory, Column Orientated’ technology a real technical leap, the specific business issues that it surmounts, remain (to me at least) ill-defined and nebulous. It still feels like a technology looking for a problem rather than the answer to a specific real world gap. For example let me probe two ‘advances’ heralded by the collective Key note speakers of FKOM, that of MRP, and simplified UI.

If we start with MRP the principal argument that is proposed time and again is that now using S4 HANA businesses can run MRP daily (they should have said instantly) and thus businesses get immediate, real time data that leads to better business decisions and a more profitable business. Well…. that makes sense, doesn’t it? On the surface, yes but dig a little deeper and it is my experience that many customers already run MRP daily and many that don’t have done this as a conscious decision due far more to either business capability restraints or a lack of need and not due to technological impediments. Exceptions do of course exist but suggesting that this is a de facto benefit of S4 HANA is a massive over simplification and a message that undermines the credibility of what is powerful and transformational technology.

To my mind the same over simplification of claim applies to the assertions made about the UI (User Interface). SAP have committed that all ERP transactions will be FIORI(tised?) meaning that the myriad of anecdotal complaints we have all heard (and possibly made) about the horrendous UX should be a thing of the past.  However although whilst undoubtedly being hit with the ugly stick  the traditional UI is eminently functional and does allow rapid data entry; something that is important to me if my job involves the creation of hundreds of Sales Orders, WBS elements or Purchase Orders. We may all want an Aston Martin but you can guarantee that after a couple of days of tying to cram 3 children and a dog in the back, you come to realise that the old people-carrier had its good points after all.To conclude – I hope that I do not come across as negative because I am not. I can see real benefits in S4 HANA the same way as I can see benefits of hovercrafts. I remain convinced however that to persuade most businesses that S4 HANA is worth transitioning to in the near future (and not just via the inevitable forced march that accompanied the demise of R2 and R3) SAP needs to concentrate on better understanding and defining the real issues faced by real businesses today and not just relying on the trite, oversimplified (SIMPLE!) and often questionable examples that are constantly wheeled out in every TechEd, Sapphire and now FKOM. I for one genuinely hope that SAP address this, as I for one would be more than happy to pilot a hovercraft in the years to come.