In a tutorial video the SAP HANA Academy’s Tahir Hussain Babar (aka Bob) demonstrates some of the new modeling features in SAP HANA SPS09. Bob shows how to build both graphical and scripted calculation views in the SAP Web IDE. Check out Bob’s video below. 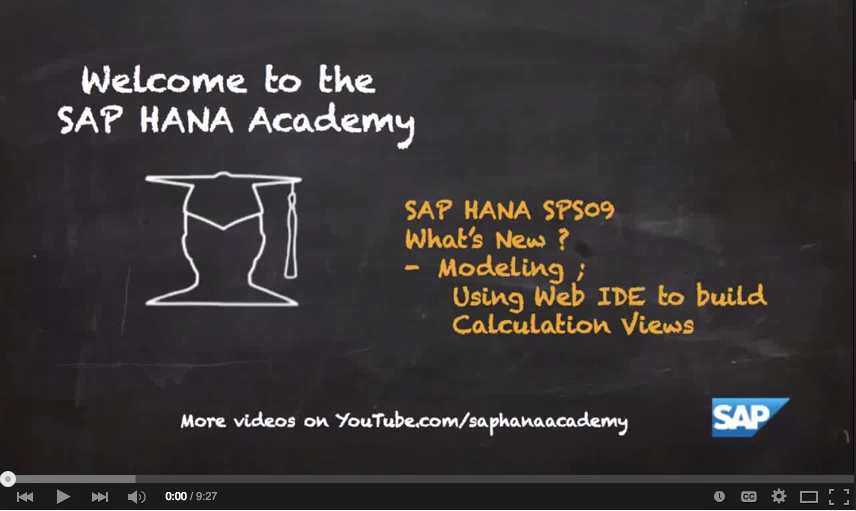 First Bob allocates rights within the SAP HANA Studio using the system user. Note a specific user can be created that has the necessary rights to build calculation views in the SAP Web IDE. The rights the system user needs come from running a package called GRANT_ACTVIVATED_ROLE that allocates the developer role to the user system. Once the below syntax is executed in a SQL console launch a web browser (in this example Google Chrome).

Go to the SAP Web IDE by entering a URL similar to the one shown below.

Log in with your user credentials. Notice that the SAP WEB IDE is based upon call libraries.

In the SAP Web IDE, just like in SAP HANA Studio, you can create a Join and convert from projections or convert to aggregations if your using either dimensions or cubes.

Bob shows how to select a data set by clicking on Aggregation in the canvas and then clicking on the add button in the Data Sources box. Bob enters EMPLOYEE to search his repository for his table and then selects and chooses his MYEMPLOYEES table. By clicking on the table Bob expands it to see it’s four columns. Bob chooses the columns ROLE and SALARY and then clicks the Add to Output button.

Next Bob clicks on Semantics in the canvas and sees that it has already delegated that ROLE is a dimension and SALARY is a measure. By clicking save Bob activates the calculation view.

To view the data Bob clicks on the green play button. Bob notes the SQL statement that the view executes and also the resultant data that is displayed on the bottom of the screen. You have the option to export the data, change the layout, refresh the data and rerun the SQL script. Also, there are tons of options to set the table prosperities.

First Bob clears the console to shut down the view. Following the same steps as before Bob chooses to create a new calculation view but names it EMPLOYEES_CV_S and selects Script instead of Graphical before clicking create.

By default you are given a simple SQL statement. Bob deletes part of the default SQL script and enters his own as shown below.

Just as in the SAP HANA Studio you must choose the columns you wish to output. So on the right hand side Bob deletes the current column and then enters ROLE followed by a ; so he can choose the data type. For the ROLE column he chooses BINTEXT. Bob then adds another column and enters AVERAGE;BIGINT.

Bob clicks on the column tab at the top to examine his newly create columns. Once again after Bob click the save button his scripted calculation view is created.  After clicking the play button Bob can examine the data and sees that it’s the same as his previous example.

Check out the SAP HANA Academy’s series of over 75 videos on What’s New with SAP HANA SPS09 as well as the playlist detailing the new Modeling features for SPS09.