Citizens as Sensor in the context of Internet of Things(IoT)

The anthropocene is connected online .

Human being as sensors or Citizen as sensors is a good thought for a type of Sensor Network, each equipped with some working subset of the five senses and with the intelligence to compile and interpret what they sense, and each free to rove the surface of  the planet.

The recent years brought the phenomenon of sensors in smartphones, like cameras, GPS modules, a digital compass, an accelerometer, humidity sensors, gyroscopes and light sensors to name a few. These numerous sensors in a single smartphone, which is already  ubiquitous in most countries, led to the development of sensing applications for collecting specific user experiences.

Citizen as sensor/Crowd as sensor used interchangeably here  in this blog is already put in use for traffic analysis, Emission measures and Started getting to be used during crisis management .

This blog will try to define the Citizen as sensor in the context of Internet of Things by correlating and mapping processes used for sensors .

I would like to refer to OGC (open geospatial)  consortium for getting the definitions of Sensors and Sensor web.

An observed property identifies or describes the phenomenon for which the observation result provides an estimate of its value. Based on this definition, we define a sensor to be an entity that provides information about an observed property at its output. A sensor uses a combination of physical, chemical or biological means in order to estimate the underlying observed property. Note that, basically, these means could be

The Sensor Web is a revolutionary concept towards achieving a collaborative, coherent, consistent, and consolidated sensor data collection, fusion and distribution system. It can be viewed as a new breed of Internet for monitoring  spatio-temporal phenomena appearing in the physical environment in real time. Any kind of sensor, from a thermometer located at a fixed position to a complex hyper-spectral sensor on board of an earth orbiting satellite, will be made available on a global level in the near future. Sensors remain at fixed locations (e.g. as part of weather stations) or move autonomously or remotely controlled in physical space (e.g. on board of vehicles, airplanes or satellites). Once deployed, each sensor associates the phenomenon it senses with the location it currently populates. This information is either stored on the sensor for later access or directly sent to aggregation systems. The retrieval and processing of sensor data, but also the management of sensor devices (i.e. tasking), will soon be carried out by means of distributed software entities that interoperate via the Internet. At its stage of completions, millions  of sensors will be connected to a large network and produce geo referenced observation data.

Every single sensor provides a small mosaic stone that helps us to generate a consolidated view of the world, to get a better understanding of the past, present, and future situation of our planet as well as active processes and correlations.

From a Technology view point lets drill down to what sensor does.

From a technical point of view, we consider a sensor to be a device that responds to a (physical) stimulus in a distinctive manner, e.g. by producing a signal. This means that a sensor device converts the stimulus into an analogue or digital representation, the latter being of more interest within the IT domain. In contrast, an “actuator” transforms a signal into an action that has some sort of effect on the physical domain, i.e. the actuator produces

a stimulus that can be observed by a sensor.

Meaning of Citizen as Sensor/Crowd Sensor!

Social media has revolutionized the way of user interaction with information. Social network users are not only creators and recipients of the information, but also critical relays to propagate information. The powerful ability of sharing has played an important role in events with varied

When we replace Sensor in the above sensor actuator model  picture  with Citizen. The physical stimulus can be of any events that are described above and the Signal output can be considered as already the information related to event coming in the social media with proper Spatio-temporal attributes which can be used to Increase the Situation awareness Or can be used for alerting .

A set of developments within the field of geo-sensors is to engage citizens to act as sensors, thus providing so-called Volunteered Geographic Information VGI).

VGI goes in the direction of Crowdsourcing , As per (UN Office for the Coordination of Humanitarian Affairs ),

Crowdsourcing can be used to solve problems and produce information by asking a distributed group of people, often volunteers, to perform certain tasks. In the case of humanitarian work, it has been used to refer to two distinct models: one in which information is sought directly from affected communities  and another in which technical or information management tasks, such as mapping or geo-tagging, are outsourced to a

“crowd” of volunteers that can live anywhere .

Data Channels for Citizen as Sensors:

which can later be used to leach out useful semantic information.

3. Citizens  specifically report disaster related data, such as landfall of a hurricane or local damage via Twitter and other social media platforms.

4.These are real-time bits of information that have already valuable content

Following steps are generally involved in the usage of the data coming from sensors. This can also be visualized from the sensor actuator model.

In the context of Citizen as sensors,  From here, we put a virtual Citizen sensor in place, that is, software observing the publicly available information on the web to perform measurements related to specific VGI activity.

Software application could be built which could encompass the following activities to build citizen sensor.

Web mining  can be implemented with the help of ontology definition  that defines the different dimensions which are going to guide the semantic analysis.

We will identify in each tweet the location where the user is located (a public building like the city hall or a hospital, parks, transportation facilities, places of leisure or work, etc.), the concept (city services, supplies, sign posts, etc.), or the specificevent it refers to (concerts or sporting events, or problematic situations as breakdowns, traffic jams, accidents, fires), as well as the subject area of the message (politics, economy, quality of life, tourism, sport, social interest…). This analysis is complemented by a sentiment analysis able to detect the polarity of the message (very positive, positive, negative, very negative and neutral).

2. The second step is to apply the calibrated rules/filters on the data obtained for Signal generation

As  we understand that there are vast amount of information available for signal generation and the information consists of noise, tactical and actionable information. So it is necessary to filter these information. Some of the techniques we can use here are possibly

i. Machine learning algorithms such as Information  classification and extraction

3.  The Third step is to measure the  outcome of the data  .

The most important step is to measure the outcome so that this serves as a knowledge base for pattern recognition . The out come of semantic text analyzer could be analyzed in detail for Strong positive, Negative and weak sentiments and can be shown in a intuitive ” citizen management console ” which serves for deriving actionable insights.

4. The Fourth step is to apply predictive analytic in close cognition with Third step .

Extracting information from data and using it to predict trends and behaviour patterns is the goal of this step. For this we should have apply on the existing dataset and apply algorithms to apply statistical inference. Some examples of categories  algorithms categories could be Clustering, Classification, Social Network analysis, Time series ..etc

Algorithms in Social Network analysis could be Link prediction to predict the missing links.

A specific use-case example could be to detect the next crime in a specific location OR forecasting the next fire incident  could be the potential outcome.

5. The outcome can be defined via Alerting and Reaction based on the context and patterns obtained.

i.  Early response to crises;

Citizen as Sensor with SAP HANA: 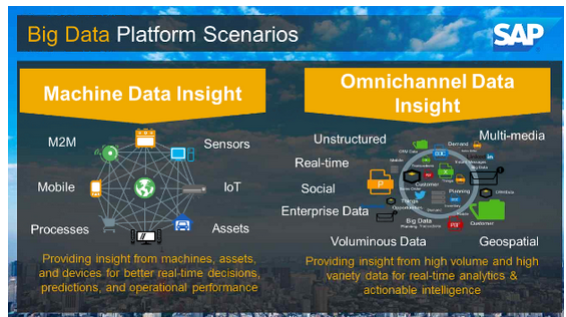 We can implement Citizen Sensor usecases with SAP Hana Platform.