In some cases it is required to integrate BOPF business objects into existing applications. The invocation of logic implemented in BOPF business objects can easily be achieved by the help of service manager. However, the transactional behavior of the BOPF and the existing application must be also taken into account. For that reason BOPF offers a special Master/Slave transaction manager concept, that is described in the following sections. In the second part, a concrete example shows the implementation of an integration scenario. 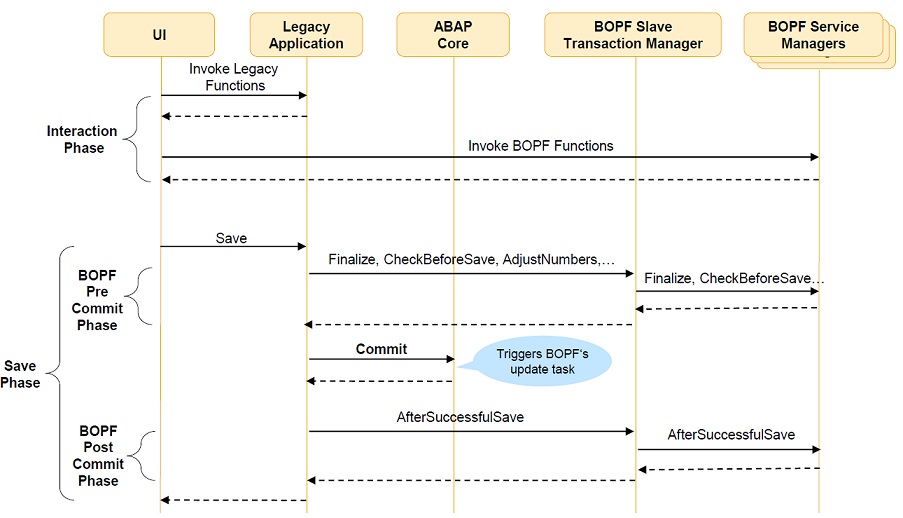 After the COMMIT WORK, the BOPF BOs shall be invoked via the slave transaction manager’s AfterSuccessfulSave core service. This is in principle only necessary if the the participating BOs have AfterCommit determinations configured and it is intended to continue with the next transaction in the same session.

In this document the concept of integration of BOPF business objects and existing applications is decribed. In the second part, an implementation example is provided.

I am so pleased to find this article. I was hoping to find some information on this very question - but didn't hold much hope. Once again - delighted by the contributions on SCN. Many thanks!

part 2 is in preparation and will contain some code example. Might be available end of next week.

Hello. I tried to call BOPF save in update task, but it dosn't work - BO records is not created.

Could you provide a code example?

And resolved myself code example:

"Obtain a reference to the BOPF transaction manager:

Sorry for the delay, here is the second part: Integration of BOPF Business Objects and Existing Applications (Part 2/2)