In this article you will find the discussion about,

Introduction to the new feature of Groups Management

As we know, the SAP Lumira Cloud Enterprise Edition offers team administration capability.  A user can share his/her items to the entire team or to selected individuals.

In SAP Lumira Cloud’s January 2015 release, we are introducing a new feature that allows team admin to create and manage groups within the team.  A user can share his/her items to groups that he/she is member of.  Technically, you can see a group in SAP Lumira Cloud as a role. Team admins can create as many groups and subgroups as needed, which makes item sharing much more flexible and powerful.

Highlights of the feature include,

The key workflows of managing groups and sharing with groups

Now let us deep dive into the key workflows,

Log on SAP Lumira Cloud as team admin (or owner), then go to the new Administration tab. In this demo, Angel is the team admin.

Note in the Administration tab there is a Groups entry from the left navigation pane. This is the page where team admin can create and manage groups within the team.  Click on Groups.  Note there are 2 existing top level groups (which have been previously created for the demo).

Now you have created Europe as a top level group.

Click the Add Members button from the current group page.

In the dialog, you can select existing team members to be added to the group.  In our demo, we will add demo users Simon and Toby to the Europe group.

Note that you can also enter emails of users to the Invite Users input box to add them to the group.  If in this case you are inviting a new user who hasn’t registered with SAP Lumira Cloud, the new user will need to follow the invitation to finish the registration process. When the new user finishes registration and logs in, he/she will join the team and be added to the group automatically.

After selecting the existing team members or entering user’s email(s), hit the Add to Group button to complete this step.

Now let’s create a subgroup (called “Marketing”) under Europe and add a member to the subgroup.

Add June as a member of the subgroup Marketing.  (Screenshot skipped)

Now we have created groups and subgroups in the team, and we have added members to each group.  Let’s see how we edit a member’s group assignment.

Go to the Members page, you can see the list of team members.  From the cog menu of the user Erik, click Edit Group.

In the dialog, you can see Erik is assigned to the group Asia.

From the dialog, you can change Erik’s group assignment. For example, check Sales will add Erik to the Sales group.  Because Sales is a subgroup of America, Erik also becomes member of America implicitly.

Click Done when you finished editing the groups assignment, or click Cancel if you do not want to make any change.

Move a subgroup to a different parent

Go back to group Europe. Select its subgroup Marketing, and then click Move.

The dialog shows the current location of the subgroup Marketing.  Its parent group Europe is checked, meaning Marketing is a subgroup of Europe.

Also note in the moving groups dialog, we show “Groups” as the root. 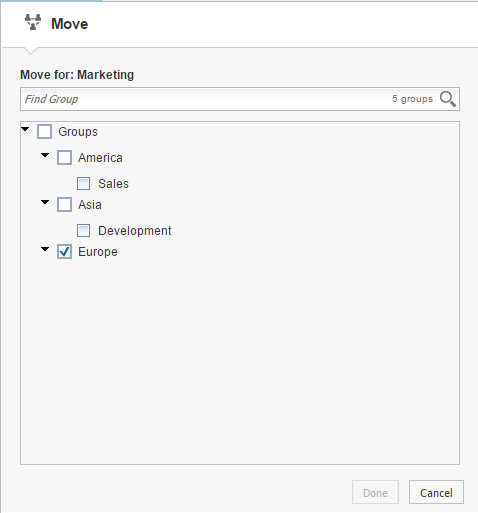 Now check group America in the dialog and click Done. 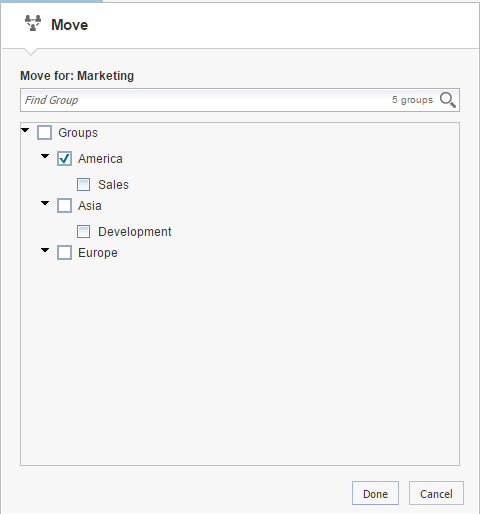 Go to group America, observe that Marketing has been moved under it.

Log on as Vicki. Because Vicki is a member of group America, she can see the dataset that Erik has just shared.

With the introduction of groups management, essentially a ‘role’ concept is introduced to SAP Lumira Cloud.  Thus, sharing and access management is enhanced in the way that,