“Strength lies in differences, not in similarities” 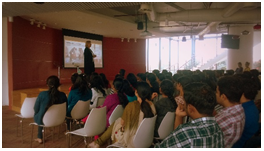 Since the start of time, the only thing that has made survival on earth desirable is diversity. Diversity in humans, diversity in nature; every form of diversity has made us what we are today.

Anka Wittenberg, Senior VP, Chief Diversity & Inclusion Officer, SAP SE spoke beautifully on the Diversity and Inclusion strategy of SAP. Diversity as a notion has many dimensions and has to be embraced, encouraged and included in every form. As Anka had rightly pointed out, one of the important aspects of diversity is incorporation of more women in the organization. Women are known for their charismatic approach towards work and their ingenious work ethic. SAP is aiming on increasing women leaders to 25% by the end of 2017. When the topic of women leadership comes into discussion, the immediate question that pops into our mind is why there aren’t enough women leaders even when they possess such phenomenal set of skills. Anka asked a group of women from a design thinking workshop whether they would take up leadership roles. Most of them where a little apprehensive about taking up such responsibilities. She thinks the anxiety is due to the level of dedication the job demands. SAP is aiming on making the job description more gender neutral.

Another subject of discussion was the inclusion of people with autism spectrum in the organization. This idea was first conceptualized in India. Autism awareness is very vital and helps in the holistic development of the organization as well as the individuals. According to Anka SAP strongly believes that the people with autism spectrum have a lot to contribute due to their exceptional memory power and keen observatory skills.

SAP encourages diversity for the benefit of the organization, attached to this commitment is also an intention to nurture and develop the potential of each individual. Diversity strengthens the differences in us and makes us proud of them, because  from within diversity originates colossal ideas, opportunities and innovations and indeed…..