Salary Negotiation Report: What Goes on Behind Closed Doors 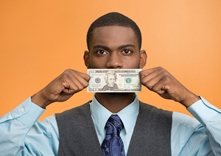 Buoyed by rising optimism about the United States economy, some workers in this country might be ready to stop hunkering down and start demanding the salary they deserve ‒ or not. PayScale’s latest Salary Survey of 31,000 United States employees from all ages and walks of life offers an interesting glimpse into the highly personal, and often secret experience of salary negotiation for everyone from CEOs to cashiers in over 20 industries.

Here are some of the more (and less) surprising findings:

Employees may have more options than they realize. I talked with Lydia Frank, Director of Editorial and Marketing at PayScale, who advised employees to focus on the facts. “Raises are data-driven. You’ll be in a better negotiating position if you have an understanding of what your position is worth based on what you know are appropriate salary ranges for your job. Stay focused on your contribution; nobody gives a raise because you need it. They give one because you’ve earned it.”

Frank also thinks timing is everything. If business is on the upswing, raises may be in the offing. However, she’s quick to point out that wages haven’t kept up with the pace of inflation. “Factoring in inflation, our current numbers from the last quarter show U.S. wages have decreased eight percent since 2006. Workers have to ask themselves if the raise offered is ahead of the inflation rate.”

As for the gender biases that the report uncovered, Frank said, “We hope this data helps highlight issues that both sides – employees and companies – need to be aware of.”

Although this latest report may raise more questions than provide answers, it also could open the doors to more transparent discussions between workers and employers. It may even improve employee engagement which is all-important to attracting and keeping the top talent companies need for growth and innovation.