Access Request Management (ARM) can connect to ABAP-based SAP systems such as SAP ERP (ECC), SAP SCM, SAP CRM, SAP  Business Intelligence (BI) to create users and assign roles with pre-delivered ABAP-based programs. Enabling the same functionality with a Java-based system such as the SAP Enterprise Portal requires a different procedure and separate configuration. To connect to Java-based systems, you use pre-delivered Web services installed on the SAP Enterprise Portal for integration.

Step 1:-Deploy the AC 10.0 web service and you will find the following in WS Navigaton.

Step 2:–Create a G type SM59 connector. This will connect to the above web service for AUTH extraction and password generation. 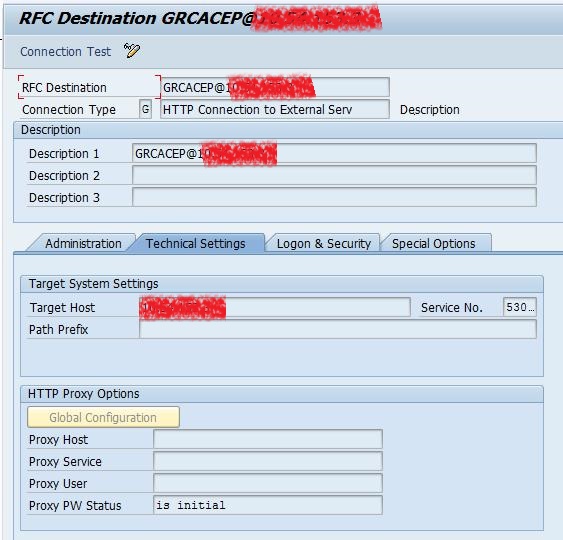 Step 3:-Create a G type SM59 connector. This will connect to EP’s SPML interface for PROV. 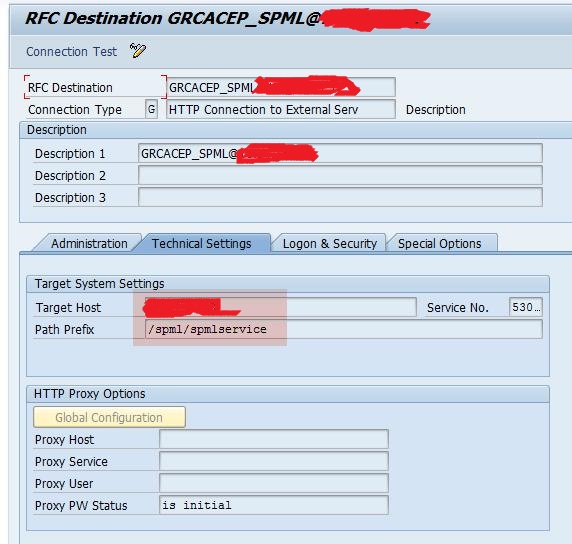 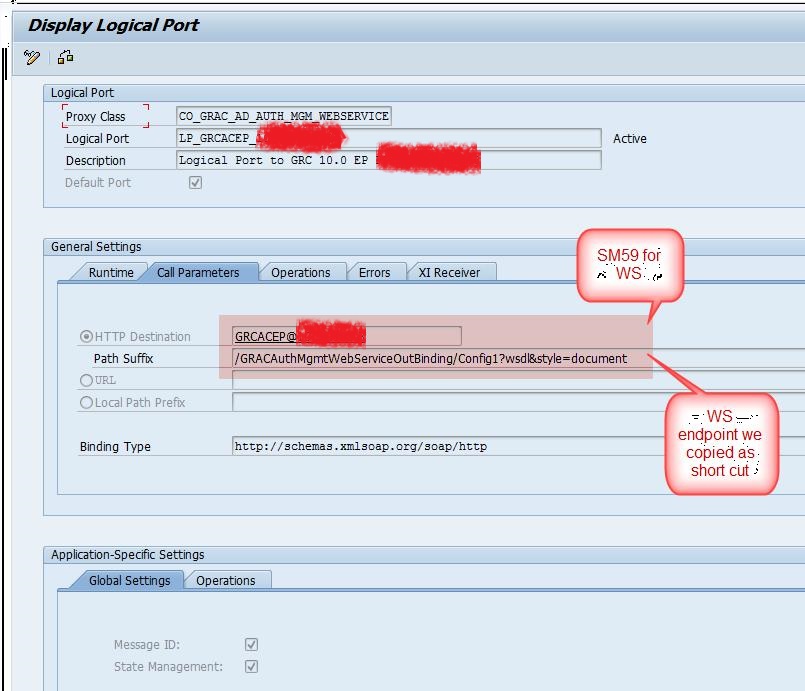 Step 7:-Attach both the connectors (WS and SPML) to AUTH scenario. 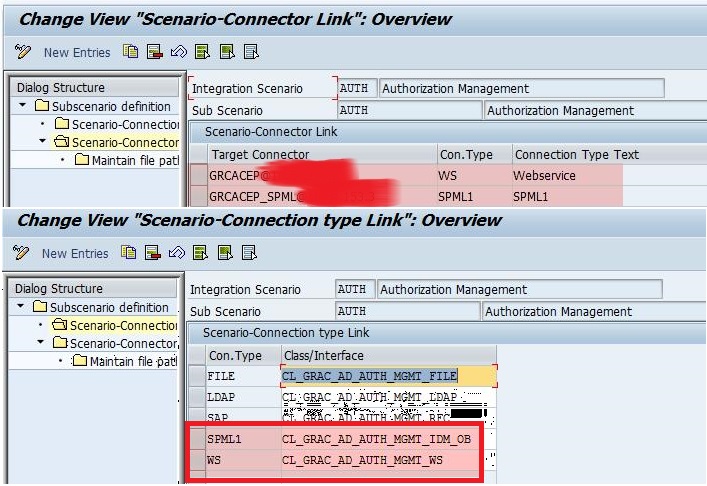 Make sure that the following classes are attached to the scenario.

Step 8:-Do same for PROV scenario.

Step 9:- And for ROLMG scenario. 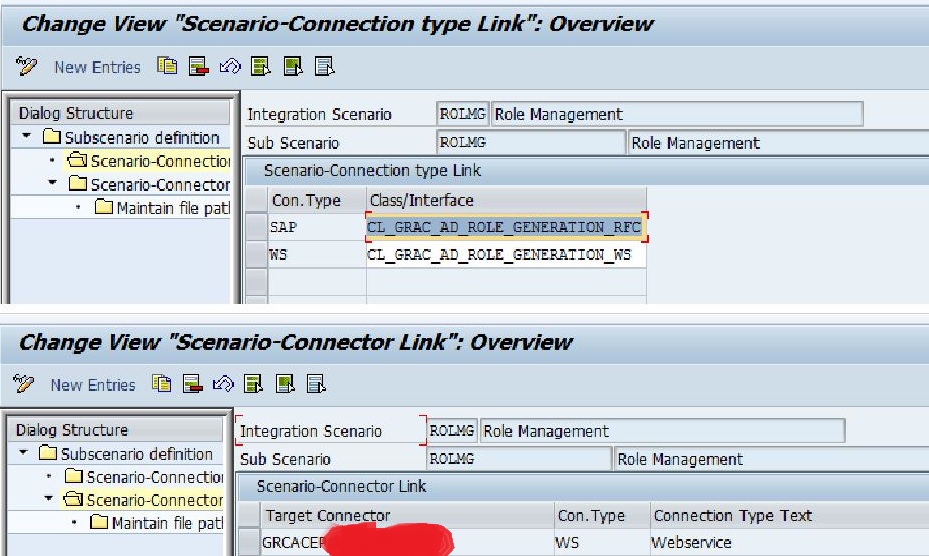 Default connector is the one which will make a runtime call to get the F4 for system field names in figure below. 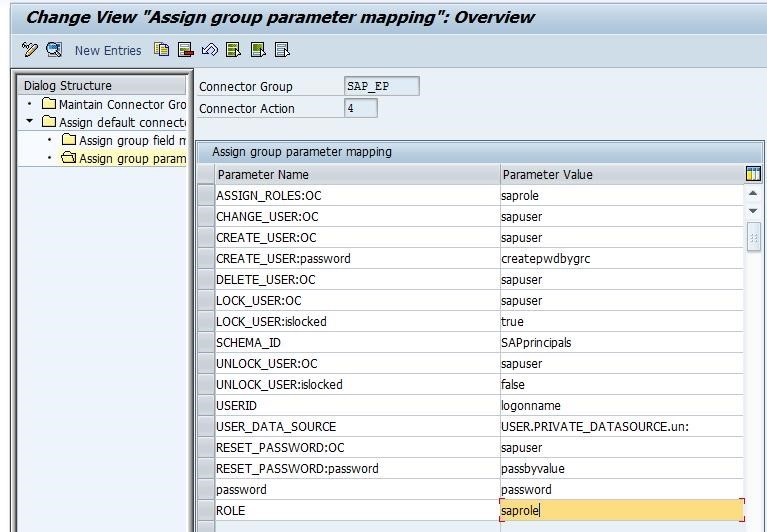 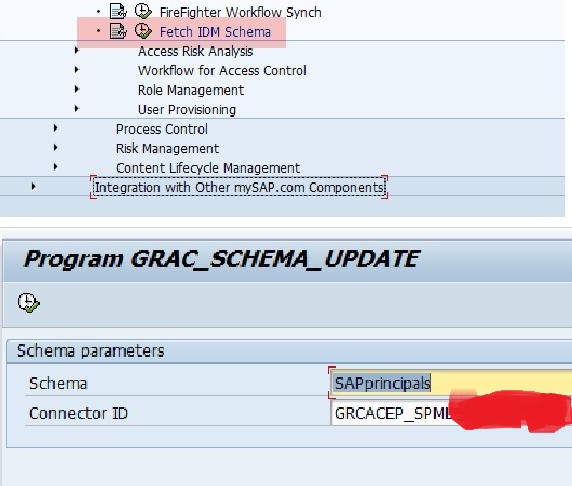 Connector is the one for SPML we earlier created

As once you start provisioning if you continue to sync using the inconsistencies. You should switch to use  ‘GRAC_ROLEREP_ROLE_SYNC’ program.

1.You don’t need to sync Profiles with NetWeaver Java as they don’t exist on Java Stacks.

2.If you continue to sync Users after your initial sync, i.e. after you start provisioning from GRC, then your GRC data will become inconsistent. These inconsistencies are caused because GRC maintains validity dates for User, Role, and the relationships between these, whereas the NetWeaver Java does not include this same detail and a future User sync will overwrite validity information in GRC with blank entries. 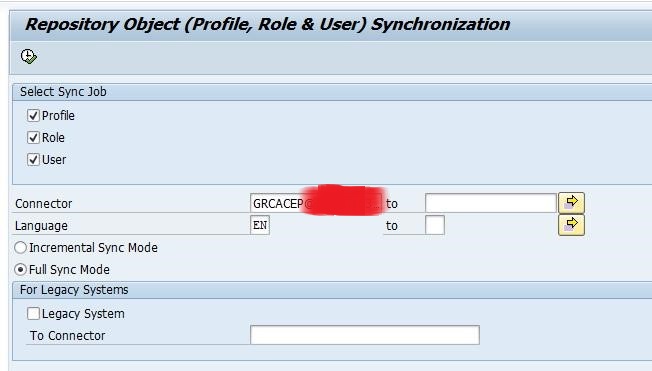 This is from WS connector.

Step 17:-Create a same user both in GRC and EP and assign  following Portal Roles to the user.

Assign Required GRC Roles to the user in the GRC System.

Procedure for creating user in the Portal for  Accessing GRC Roles.

2.If the user has been created by the User Management Engine (UME) that is connected to the GRC ABAP system, you do not need to create the user in the portal system.

If not, create a new portal user and assign the system to the user in the User Mapping for System Access tab, along with a mapped user ID and password.

3.After creating the user, go to the Assigned Roles tab and assign the role GRC Access Control  to the user who has the power user role SAP_GRAC_FN_ALL in the ABAP system, to enable viewing of all the Work Centers.[Only in case of GRC AC is activated].

Hope this  was useful. Please use the comments section to share your feedback and questions.

I have not yet configured EP with GRC. However, thought to appreciate your effort for sharing this document. Hopefully, I will follow this soon.

In addition to the note 1607232 describing parts of the above, you may want to double check your Portal whether note 1647157 is applicable. That solved the 'no data found' message with us whilst trying fetching the IDM schema from the Portal.

Thanks George to provide more information which can be helpful to  other users.

Yep bit of a hidden one:

Note if it is 10.1 GRCPOR you are looking for, it would lead you also to the same one as above.

As it is JAVA it is not incremental, you always deploy the full works (so via SDM no need for an installation one and then a support pack one etc etc).

You may want to consult the attachment in note 1352498 to determine correct SP level. Only thing that bothered me there is that for GRCPOR (when looking in 10;0 tab) they speak of latest SP11; Whilst via path above I could only find SP10 as latest. But OK perhaps not relevant to you.

I have a couple of questions:

Yes both the Alias as in my case I had to provide both.

could you share, which t-code or URL to launch Webservice Navigator.

that note does not say on WS. But another note 1607232, mentions point  3. Once deployed, you will see a web service called GRACAuthMgmtServiceOutBinding in Web Service Navigator

Yes. According reference Note 1607232, once deployed then you will see the webservice.

i wanted to know where to find the Webservice tree structure(as shown in point 1 of this doc.). So, now, i see that,  it will be available on EP.  Could you let me know, if i am correct

Yes. You are correct. you can create connector and maintain connector type, Logical port, Connector group, and Scenario-connector type link in GRC Server.

Yes you are correct you see the webservice navigator in EP itself.

Let me know if you want any other details.

You can always raise questions or feel free to suggest, which you think can be added to this document for better understanding of new learners like you.

Regarding 'assigning group parameter mapping' above: in case your Enterpise Portal has a user data source that does not allow  you to create users (typically corporate LDAP) then please consider note 1958231, which instructs you to leave out the entries CREATE_USER:OC and CREATE_USER:password.

This prevents errors showing in the prov log and requests from never finishing.

This as the parameters in essence are SPML instructions fed to your portal's provisioning engine. E.g if you wouldn't use request type 'Delete user' then also you could kick out the parameter 'DELETE_USER:OC' etc etc

May the force be with you.

Thanks for the suggestions.I have incorporated the same in the document.Please feel free to suggest any other  valuable points.

Can you kindly add the steps for uploading portal groups to GRC?

Please elaborate which Portal groups are you referring to ?

I meant portal roles only

I hope the GRC user-provisioning is not limited only to those Java AS with EP software component.

Per my understanding the underlying Java UME is same for all NW Java AS systems, and is independent of the software components (say EP, PI, NWDI to name few) applied on top of it.

Could you kindly clarify?

But the above document was very specific to EP integration with GRC and the user provisioning as I talked specifically of deploying web-services and Software package of EP.

For other Java AS integration I am not sure which all Java AS GRC supports.But I am sure PI and other Java AS can be integrated with GRC provided there plug-ins/software packages are made available by SAP.

Hope this answers your query.Please feel free to provide more suggestions to make this a better and comprehensive document for EP integration with GRC.

Hope all is well at your end!

We have followed all the steps .

We can access GRC Hope pagein our Portal  under GRC Access Control Role. But whenever we cllick on any link in GRC Home page in our portal we get Page not found error. Please refer screenshot.

Could you help me to resolve this issue please.

I think I am missing the issue over here.Could you please put it step by step what you trying to and what exactly the issues are with screenshots.That way I or anyone in this forum can help you in a better way.

Thank You for your response.

Though we have resolved this issue now. But Thank You for your help and detailed document

Does this procedure applies also to GRC Access Control 12.0 ?

Thanks for rapid response.

How to downlaod the role attribute file from Enterprise portal system to upload to GRC for role provisioning.