As described in the master document of this blog post series, after we created the initial version of the report and modified it, we’ll proceed further with combining several DataSets.

The report that we created covered the initial requirements that we defined. Let’s extend them with the new information that should be added to the report:

Add employee name to the table with user details.

Add statistic how many employees have a given business role.

The DataSet that was created earlier does not contain information about the employee name, therefore we need to create a new DataSet and merge it with the DataSet RolesSCNDS.

Having the RolesDocumentSCN opened in SAP Lumira Desktop, we need to navigate to Prepare tab and add a new DataSet.

The steps to create the second DataSet are the same as the ones for the first DataSet. Let’s name the second DataSet UsersSCNDS and use the following select clause to extract the user identifier, user state, user display name, information when the user was created, information when the user was last modified, city in which the user is located. To extract that details, we’ll use again DB views that IdM provides:

As result of this, we have two DataSets.

We have the DataSets created and now we should go forward and merge the content from them in one DataSet.

Make sure that RolesSCNDS is selected and start the wizard for merging DataSets.

On the left side the current DataSet should be RolesSCNDS and on the right side we should have UsersSCNDS. We should also mark the columns that will be used for merging, these are “Person Identifier” and “UserIdentifier”. Also we should specify the merge type – in our case “Inner Join”. After we press the Merge button the RolesSCNDS will be enriched with the content from the UsersSCNDS.

We extended the RolesSCNDS as in Lumira the Visualizations and Story Boards are associated with DataSet. As our first object was created on top of RolesSCNDS, after the extension we are able to continue further to make the report richer.

If we now navigate to Visualize tab, we’ll find that there are more dimensions in the list.

We’ll change the name of “UserDisplayName” to “User Display Name” and add it as a second column in the table.

We could also save the document (now it contains 2 DataSets and one Story Board) and publish the story board to SAP Lumira Cloud. This publication will trigger publication of the modified DataSet as well.

As we are ready with the extension of the DataSets, we could proceed further to the next step and combine multiple visualizations. 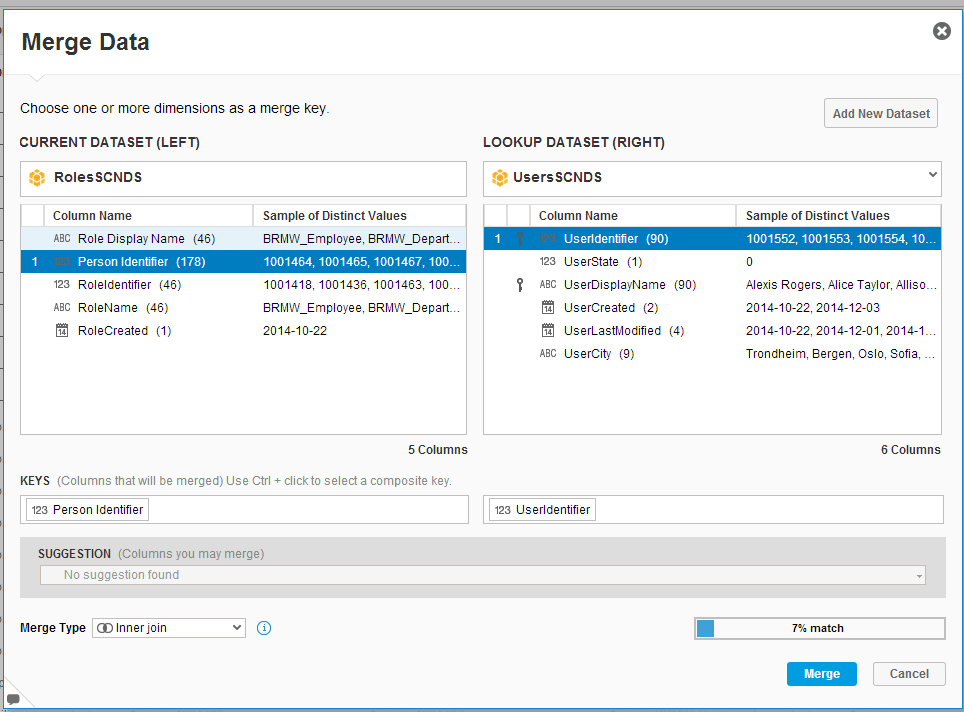