How can GPD improve Defense Manufacturing?

How can GPD improve Defense Manufacturing?

The Aerospace and Defense Industry is a contract driven market involving complex manufacturing processes that are highly regulated by the US government.  Reports and documents must be delivered to assure compliance to contracts and government standards.  Parts and services required to complete these contracts can get quite expensive and affects the contractor’s bottom line.

GPD (Grouping, Pegging and Distribution) is a software tool to optimize project manufacturing by grouping material requirements from multiple projects for purchasing and manufacturing parts.  Grouping common parts reduces the number of Purchase Orders and Production Orders.  Better pricing can be negotiated resulting in fewer minimum quantity purchases when collectively purchasing materials for multiple projects.  Also, fewer production orders with larger quantities yield greater efficiencies reducing the “per unit” cost.  A relationship table is maintained that defines which project WBS elements are allowed to participate in the Group.  Also, more than 1 Group can be used for the projects depending on the part number and the location on the BOM tree.  This will be discussed later.

The GPD Pegging table is the road map as to how cost is distributed.  Not only does this table define the “MRP” Project WBS Elements that owns the costs for the parts by knowing the order numbers and quantities; this table can instruct GPD Distribution to direct the costs to go somewhere else via the value in the Break Point field, such as a WBS Element or Network.  This comes in handy when major subassembly costs are tracked separately.  For the sake of this white paper, I will treat project costs and GPD costs as non-valuated (actual costs which ignores costs on Material Masters and the General Ledger is unaffected) and gets expensed to the Project WBS Elements.

GPD is a tool to enable Project Manufacturing to operate like commercial manufacturing using MRP with the Production Planning module by combining project requirements.  Typical Project Manufacturing seldom looks beyond its project for purchasing and assembling parts.  Also, Project Manufacturing is performed in Project Systems within a project structure. When transferring parts between Project WBS Elements, a separate process is needed to move the associated costs which can take time gathering data and processing costs.  When transferring parts between Groups in GPD, the costs associated with the parts will be move automatically by GPD Distribution to the appropriate Project WBS Elements.

The key to GPD providing a smarter Project Manufacturing solution is the Grouping Strategy.  One must understand the cost reporting requirements and know how to build the Project and Group structures to support it.  Allow the system to provide the data flow and don’t try swimming across the current.

First, need to understand the types of parts that are consumed in products across all contracts. The most common parts like nuts, bolts and screws can be treated as Valuated Plant Stock or Non-Valuated Common GPD Group stock (as a Common Group for several projects).  The costs of plant stock do not appear on the projects until the parts are issued to GPD relevant Production Orders and Distribution then moves the costs from the orders to the Project WBS Elements. Costs of Non-Valuated GPD Group Stock gets expensed to the projects at the time of the Goods Receipt or Invoice Receipt.  If costs cannot be billed to the customer until the parts are part of “WIP” (which means issued from stock), then recommend using Plant Stock (Weighted Average Cost or Standard Cost).  If costs can be billed but not claim as “Earned” for Earned Value, then the parts can be in a Common GPD Group and reporting can show that the costs are yet to be earned.

For other purchased parts that don’t figure into the Parameter Effectivity for Model Unit scenario, they can also be in a Common GPD Group Stock.  If costs cannot be billed to the customer until the parts are part of “WIP” (which means issued from stock), then recommend using Plant Stock (Weighted Average Cost or Standard Cost).  If costs can be billed but not claim as “Earned” for Earned Value, then the parts can be in a Common GPD Group.

When dealing with parts that are controlled by Model and Unit Parameter Effectivity and to assure that parts for specific Model and Unit has the appropriate difference/changes as defined by the Change Document; these parts should be in a “Project Level” GPD Group to assure that the costs postings to the project reflect the hardware being provided to the customer as the screen shot below shows by the RED square.. If a “Common” GPD Group was used, there are no assurances that the parts with the changes will be pegged to the appropriate project to receive the correct costs.  Parameter Effectivity does not support GPD which is why those BOM levels involved should be handled within the “Project” Group.

Another option to Parameter Effectivity is to use WBS/Material BOMS and WBS/Material Routings.  Since there is no getting around “Project” Groups, the Project Group WBS Element can have its own set of BOMS and Routings for the same Assembly Material Numbers and is a less complicated process.  There is an MRP configuration setting to include WBS related master data.

This graphic above shows different Grouping Strategies that can be used.  Each oval represents a GPD Group WBS Element.  One strategy not shown is the ability to have Assemblies at the top of the BOM tree to be executed and completed in Project Systems using Network Activities or Production Orders with a Project WBS Element on the Account Assignment in Production Planning module. 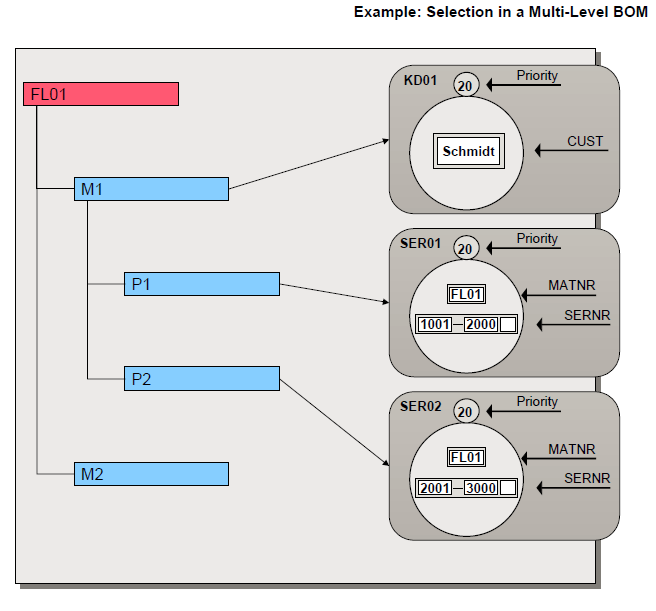 The Parameter Effectivity example above shows changes to multiple parts depending on the customer. Having a pool of parts in a Common GPD Group WBS Element makes it impossible to insure that the  costs for the changed parts gets pegged to the Project that received the hardware. 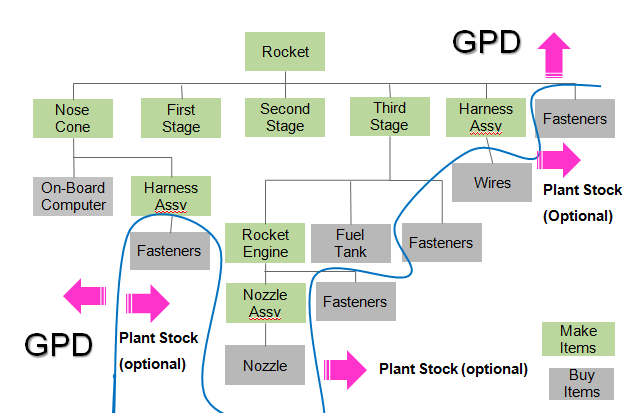 This image represents how Valuated Plant Stock supports GPD Grouping strategy.  GPD can have one or more Group WBS Elements supporting parts along the BOM tree. 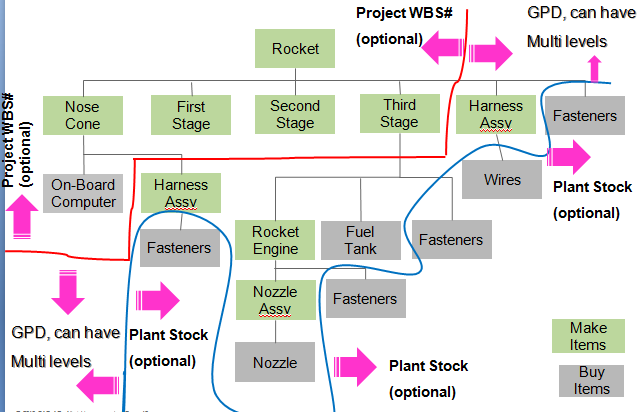 The above image shows non-GPD BOM nodes at the top of the BOM structure.  Recommend using Project specific GPD Group at the top of the BOM including Parameter Effectivity BOM levels in the event when parts need to be transferred between projects so that their costs can be automatically moved via GPD Distribution. 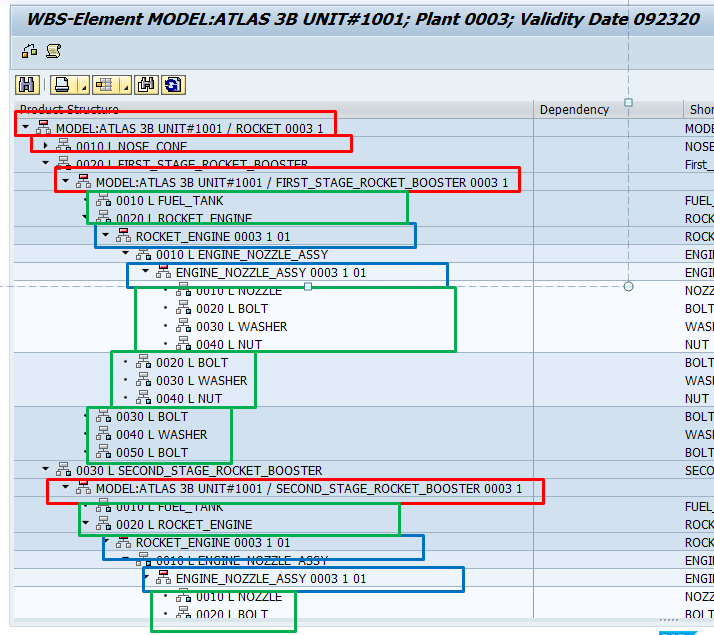 I have one Question for GPD..
SAP recommended non-valuated stock for using GPD (Especially Cost distribution)..
One of my customer want see current all stock quantity and value in the storage not only plant stock.
(For the legal purpose)

Hence, they consider valuated stock without GPD for this reason.
They should have reporting to DoD / DCAA with CAS for US project.

Do you have any idea for using GPD with non-valuated stock and can see the existing stock value?

Because GPD non_valuated is a "True Actual Cost" solution (what is actually paid to each order is what you get on the project WBS elements), there is no value of stock as can be seen using tcode MB52 which are already expensed to the projects (not inventory costs).

In the ECC application, there is a GPD valuated solution  which performs the GPD non-valuated postings plus the valued cost postings which results in the "Valuated Cost data" cancelling itself out to zero at the Project WBS level because GPD non-Valuated process moves the valuated component costs with its Statisical costl.   For this to work, the "Primary Cost Elements needs to be Category type 90 because statistcal cost postings (i think it is value type 11) occurs for Purchase Order Items from the GR or Invoice Receipt.  The stock values will appear on tcode MB52 with this solution.  This a very complex process which is almost never used and SAP does not support for S/4 HANA.

What GPD customers have done is create a Function Module that uses the PEG_TACTASS table which goes down the Goods Issue Tree and gathers detail costs from the COEP table to report the value.   Also, customers have custom programs that calculate aggregate Part Number costs and store this value on the Planned Price fields on the Material Masters.  When material number costs are found during the course of business, these fields gets updated.

I hope this answers you questions,

I hope you are still in charge for the GPD processes. We are using GPD in an Multi site PS Structures over different booking circles / company codes  in one Project Definition in combination with NLCC process (Stock Transport Order with Delivery and Billing Document/Invoice (Cross-Company-Code)).

We have Problems with the distribution process and are looking forward to find a Person with experience in the GPD configurations.

Probably You can help us or know someone who is familiar with the Customizing.