Why does Xmas have to end? Live 3 Introduction

As I sit amidst the wreckage left over from Xmas I am reluctant to get back to work.  The season of goodwill must go on!  Furthermore, the last two weeks seem to have disappeared into a blur of TV, which is unusual in our household, discarded wrapping paper and decorations that must be taken down today.  So Julie’s video is a brilliant way for me, if not to work, to ease myself back into the world of computers and people who attend to their needs. 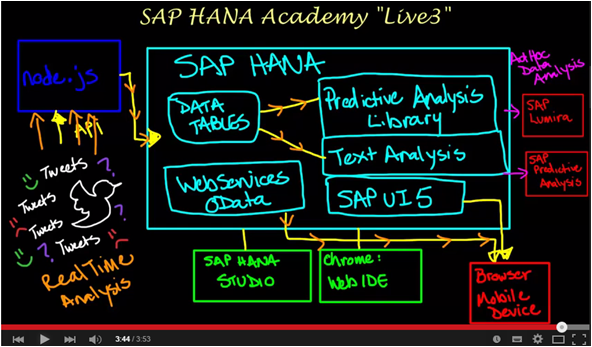 In this video by the SAP HANA Academy, Julie Blaufuss introduces the Live 3 series of videos.  Julie’s chalkboard, built over the video, explains how this series of videos will build real time social media analysis within SAP HANA.   It’s early on in the year so the idea of being led through a new project is very appealing.    It is also difficult to capture how Julie’s well timed drawing illustrates and encapsulates what I describe below.  Take it from me, it’s easy to follow, and really helped me to understand the whole course.

The first thing that will be used is some tweet data from a Twitter API.  The data will then be loaded into SAP HANA data tables. This scenario uses the open source runtime environment node.js which works with JavaScript and is especially suited for streaming data.  Another plus point is that SAP HANA also has native connectors for node.js.  Once the data is loaded into the tables you may want to take advantage of the other features within the SAP HANA platform such as the Predictive Analysis Library and the Text Analysis engine.

Another useful thing to look at is the sentiment of the data.  For each individual tweet that comes in you can determine whether it’s positive, negative or possibly requests for further information.  Sentiment can be also used to inform clustering analysis which enables you to understand both the sentiment behind the tweets and be able to segment the audience.  For example, a business may pay more attention to the comments of someone higher up in the Twitter-sphere with lots of followers .

Now that the data has been loaded and had some initial analysis performed on it you will want do some development work.  Julie describes how the video series will show you how to connect to the SAP HANA development platform using both the developer perspective within SAP HANA Studio and using the Web IDE through Chrome.  You will create the procedures that will allow you to call the clustering algorithms and sentiment analysis based on the data that’s being loaded into your data tables.   Next you’ll take a look at the steps to create a web service using the open data protocol OData then you’ll take a look at creating an HTML5 application using the native development tools SAP UI5 within the SAP HANA platform.  This allows your end user to be able to use a web browser or mobile device to be able to review the analyzed Twitter data.

Remember that using the Twitter API enables you to bring in the tweets in real time.  As they’re being broadcast you want to be able to load them into SAP HANA, let them through your Predictive Analysis algorithms and your sentiment analysis to be able to get answers to your users in real time. Finally you’ll learn how to do some modelling with the SAP HANA Studio to create views based on the data that you’ve analysed.  This will allow you to that expose that data to your business users through SAP Lumira or SAP Predictive Analysis allowing them to do further visualization, reporting and analysis on that data thus helping business make decisions based on the sentiment that they’re receiving from their customers.

To summarise, Julie shows how to use open source protocols connecting with the native development within SAP HANA to create a real time social media analysis application.

The skill of making the complex seem simple is a great talent which Julie amply displays throughout this video.  However, I have a simple problem, the solution to which though concerning, is puzzling.  I can’t remember any mistletoe this year.  This is despite being the part-time chauffeur, body guard and bank manager of three beautiful teenage girls.   I am my own little service industry for them.  Babar inc runs at a loss measured by the hair I pull out of own head each week as I struggle to meet their increasingly exasperating demands.  Sadly the certainties of the past are long gone.  It‘s parenthood by consent rather than filial duty these days.  My wife made me get rid of the boyfriend priest (baseball bat) I kept by the front door.  She felt it lowered the tone.  So where have all the hangers-on gone?