We normally come across this very common issue where special characters are received from ECC and passes through PI successfully and at receiving system it fails as the receiver does not accept special characters.

Especially when we are dealing with Bank scenarios, the protocols at Bank’s end are very strict and the payments are rejected very frequently.

The major problem is that these characters do not get detected as they are not visible with naked eyes or in payload.

If you try opening payload in notepad then you will be able to figure out.

Normally when we try to deal with special characters we focus on the characters which are not acceptable, but while using this technique we normally miss some or the other character and the problem persists.

So to deal with special character problems, I have used a method which is fool proof and can anytime be used very easily and in very simple way anytime and in any version of PI/XI.

In this method we will be concentrating on the allowed characters list rather than not allowed ones.

It is a simple reusable java code which can be used to write and UDF and can be used for any input fields which need special character handling. 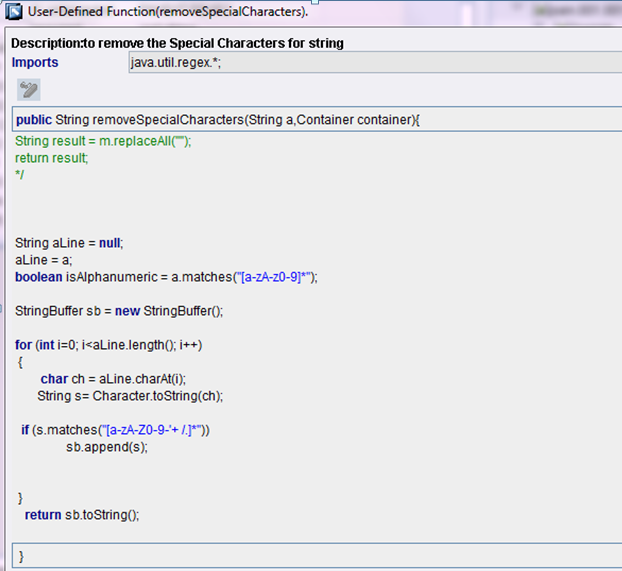 This is an excellent document which explains the most commonly faced issue resolved in the simplest manner. Helped a lot. Thank you!

Thanks for sharing this!

This is my opinion.

Using this UDF, there will be data loss in middle-ware (only alpha numeric characters are allowed). I will not recommend this solution.

simple yet powerful  and useful. innovatively used. Regex has always been like this 🙂

But, wouldn't this cause data loss?

No It won't cause any data loss, try it.

Yes it does, it is equivalent to this much shorter version:

And it replaces everything that is not in the regexp class [a-zA-Z0-9-'+/.] with an empty character.

Whether or not that is okay depends on the functional requirements. But it most certainly removes data from the input.

I agree with Frank, the code removes special characters which may or may not be necessary (depending on functional requirements). I haven't tried it yet though.

Good thought, however In my openion it will cause data loss.

We need to use this UDF depends on functional requirement.

Thanks for the document and your effort. Just wanted to mention that as per my understanding boolean variable that is declared is not at all required/used in the UDF.