CHARM – A Developer’s Point of View – in other words – is CHARM really Charming?

Here’s what I thought before using CHARM:

The above is living in Michelle’s world of what CHARM will do.  NOT WHAT SAP or CHARM Claims to do.

So here’s a scenario:

I would make changes to an object.  There would be changes to an outside system.  Developer 2 makes changes to a different object that is a part of my project.  All of the previous transports/objects will be bundled in one CHARM request.  Emergency and non-emergency transports will be taken into consideration. 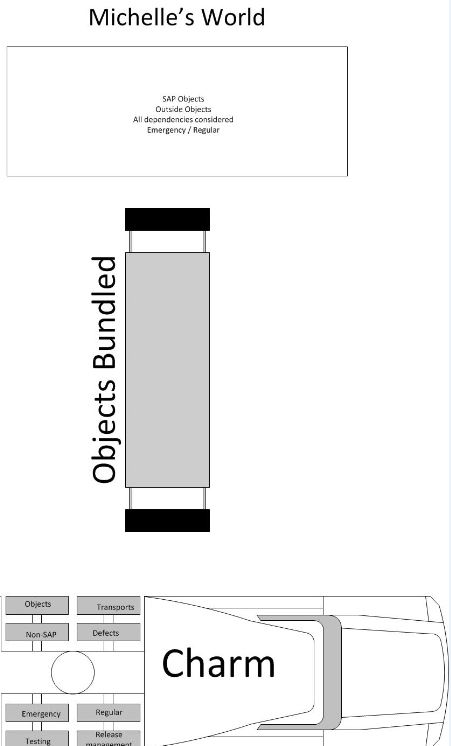 So was my vision correct?

If the above confuses you.  You are not alone.  It confuses me and my BASIS people.   So the only solution I found was to create a new CHARM ticket with just the table.   Transport it first.  Re-transport the 2 Charm tickets.  They will go into the system clean.

All transports are moved to production with the release.

Only one developer works on an object at a time.  Or if more than one developer is working on it, then it’s for the same project.

When a new table is created, all your developer’s will know it is new and won’t use it in their objects.

OK – I’m done with the things CHARM doesn’t do well.    There are some things that it does very well.

CHARM is amazing at:

So there you have it, my personal thoughts on CHARM.  Keep in mind, like all SAP products, different companies will have CHARM configured differently.  So some (or none) of what I’ve written may apply to you.

Does CHARM do what it claims to do?  Yes.  Does it do what you think it should?  You be the judge of that.  Personally, I think it does make my job easier.  It’s not a silver bullet.  It doesn’t fix all transport issues.

Please comment with some pros and cons.  And do let me know if I’m losing my mind with some of my comments.  🙂

I have some additional inputs that might help you improve your ChaRM experience:

I hope my answer was helpful.

It's good morning for me!   Yes, it does help.  CSOL - cross system object lock - it's something to ask my BASIS team about.

Dependent tickets - OK so perhaps we don't follow best practices.  But when you think about it, I as a developer am creating objects that can be used in several different ways - with several other objects or other projects.   I do that to avoid duplicate work, and to keep everything up to date.  So that means my object can be used in several different projects.   So there could be several RFCs that ultimately contain the same object.  As our functional/testing/business side people create RFC they would never know that.   I will check out the related transactions assignment.

Thank you for the great information!

I would like to add a new input too:

There's a functionality in ChaRM (starting on SPS06) called DGP or Downgrade Protection. This is an enhancement in the CSOL Cross System Object Locking feature.

Downgrade Protection functionalities help you to increase consistency throughout your system landscape by identifying parallel developments on same objects or customizing settings.

If conflicts are detected, the related transport management activity will be canceled by default. To proceed it is required to specifically tell the system to “ignore” those conflicts.

You have just outlined one of the things about Charm that I hate.  Ok - hate is too strong of a word.   That I dislike.

Yes, that's the way our CHARM is set up.   And guess what?  We as developer's are really good at pressing the ignore conflict then green check.

Conflicts are so much fun:

If for some reason a transport is not transported into production.   The Charm ticket is never going to be used.  We've backleveled the code, and are working on a different project.   The stupid conflict box comes up.   Then we need help to get it transported to our testing environment.

If there are times when that object needs to be worked on in two different projects (Charm tickets) - then we have to press ignore conflicts.  Then we work in two different tickets - Probably I've gotten done with one project and it is in test but not production yet. The next person needs the object for their project (Charm ticket).  They ignore the conflict.

If there is an emergency transport that has made it to production, and I need to change the object for a project that will go with a release.  Guess what?  You've got it, another conflict.

We - as developer's get really used to ignoring the conflicts.  It is causing more work for our BASIS team as the transports won't automatically move to our quality (test) environment.

Have I ranted enough?   I really hate this feature.  It may save us a couple of times when we really can work around it, but for the majority of the time - it's just annoying.

Again - remember I am a developer, and don't claim to know the ins and outs of CHARM.  I just have to have the pain or enjoyment of using it.

It really was a good thought though in theory.  In practice....  One of my least liked features.

Have a great day, and thank you for bringing that up!   I'm sure there are other companies that would find it useful.   (And we use it too.  🙂 )

nice blog - all valid points and real world scenarios.  thank you for sharing!

You are welcome.  I'm glad you liked it!

Nice Blog and a clear explanation of difference between theory and Practice.

Thanks for sharing your experience on Charm, It is one of the beautiful tool which has such a flexiblity to support different kind of unique scenarios.

There are plenty of posiblity in Charm, as you mentioned every customers use that in their own way.

One case, if same object touched by 2 different developers in the same project, Change manager approves for single TR, and normally it appends to the existing TR as new tasks, this way you can control the dependencies.

or if you do the import via automatic import_all job, all your dependencies and sequencing dependencies taken care.

or try out Preliminary Import for normal changes where you can keep the change in import buffer,follows import_All ( project import ) and prevents the changes moves out of order wih the urgent change.

and the whole purpose of CSOL, is the collabration between the team or developers, who is working on what, means I would like to know what are the other people working on my object, so dev A gets popup says that so and so objects been locked in TR by Dev B, he should consult Dev A or administrator to remove the Lock, it is depends on your project requirement out of 12 various locking features, which one you want to setup, if you setup only for warning messages for all the conflicts, ofcourse you end up conflict in production, you should nt, some usecase, you should setup error messages, where no one are allowed to work on until unless the lock been released.

it is good to know the views and way of working with the various features. 🙂

Thanks and Best regards,

Yes, 2 different projects - under one TR.   That makes things a little hard when trying to promote them to production..   If one is broke and then other isn't, well it just doesn't work out well.

Assign and decouple TRs.   Yes, I have used that as well.  🙂    I'm beginning to think I've used a lot of the options.    Again trying to keep all the tickets as a part of one project, and that project is a Charm "ticket".   It has come in very useful.

And transporting...   Transporting is a little over my head.   Again that would be something my BASIS team works out.

I will start to look at all the different features.   Slowly.    Maybe I'll like Charm even better.

Thank you for the great comments!

Really glad you're blogging again, good memories on how blogging changed our lives 🙂 .

I see this blog post as a big "challenge" sign for others to provide thoughts and come up with (if needed) creative ways to solve this problem you're experiencing.

I hope it's possible to overcome this problem through means of reporting to keep an eye on which changes reside where.

Did you check out transaction /TMWFLOW/TRMO?

Oh boy - you've made me dangerous now.   A little bit of knowledge on my part and I could bring down a system!

Really this report is great.  I'm still digging into it.   It looks like it's going to help me a lot.   I can check it out before they move my transports into production.

Nice hearing from you!

It triggered me this morning, I very much like the blog and the problem you mention.

Thinking about it some more, there are more features which could be interesting if those are not already in place:

Selective import and status dependent import could also be interesting  to activate to aid in the import strategy / release:

I'm working on a new CHARM study at the moment so I'm digging through all of this stuff again (we configured CHARM one year ago). We're (SolMan team on customer side) drinking our own champagne now, using incident & change management for incidents and changes on SolMan.

We still have to meet so I hope I see you at one of the events this year!

Just an FYI related to the transaction /TMWFLOW/TRMO, it has been obsoleted in release 7.2 and the functionality has been included in the Admin Cockpit for CHaRM.