Adjust it the way you need it for today!

I hate exercise. Here, I said it. Hate it, hate it, hate it. And it’s not that I’m opposed to the movement as such (the way our feet can take us from point A to point B is simply amazing), but the repetition and sheer pointlessness of “exercise” or “working out” (even the names are unattractive) always made me feel like my IQ was dropping by the minute.

Our school PE teacher Vladimir Petrovich always had hard time with my attitude. He was under the tons of pressure from other teachers to give a passing grade to the otherwise excelling student despite the fact that said student had little success with meeting the grenade throwing and rope climbing benchmarks that were expected of every potential Defender of Communism. Vladimir Petrovich used to sit on the bench next to me and sigh and ask me whether I understood what the “harmoniously developed individual” meant. Being a book worm, I had no trouble understanding the concept. But what I could never understand was the exact purpose of all that throwing and climbing. Like a Stanislavski method trained actor, I demanded to know what my motivation was. Really, wouldn’t the 100 meter race be so much more exciting (not to mention faster!) if there was a rabid tiger involved?

But as the years go by, we are all eventually faced with a need to perform some sort of regular physical activity (and no, the eye rolling doesn’t count, sadly) if we don’t want to lose the ability to move. Since watching TV has always been one of my top interests, it seemed like a natural choice to procure an exercise DVD. Combining the pleasurable experience of TV watching with dreaded exercise should at least zero it out, right?

‘The Complete Total Body Workout System’ lead by the former Miss Fitness Minna Lessig seemed perfect. Each segment was only 10 minutes (about 9 minutes more than I was willing to spend but still OK) and it’s “total body” – surely I wouldn’t want to end up with disproportionately fit body parts! For the whole 10 minutes I’ve diligently tried to follow Minna’s cue with great deal of confusion. (“Did she mean her right leg or mine?.. Oops, we’re not doing that anymore… Well, this is clearly more than “shoulder width apart”, has she ever seen her shoulders?.. Did she say “gluten”? No, it sounds like “glutes”, must be some industry term… Speaking of gluten – I’ll definitely need pizza afterwards!”). The repeated requests from smugly smiling Minna to “get into it” and “push harder” were wearing my patience thin. I’ve heard of people who get some kind of “exercise high” from the physical activity. But I must be missing a gene or something because the only things I could feel were frustration and annoyance.

So rather quickly the DVD returned to the shelf and I’ve happily reunited with the sofa. Then some mysterious forces came into play as our evil cable TV provider suddenly added some free exercise videos to their on-demand programming. The universe clearly was on the quest to get me moving because getting free stuff is right there in my top priorities together with TV watching.

And that’s how I came across another exercise video by Leslie Sansone. At first the concept of, essentially, a walking in place routine seemed totally ridiculous. But Leslie had me at ‘hello’. There is no right leg or left leg, start with any leg. If you don’t like a specific movement, just go back to walking. If you feel tired – slow down, if  not – keep up the pace. ‘Adjust it the way you need it for today’, – repeats Leslie. There is no mentioning of glutes and such. And even after saying “this is better than a coffee break” Leslie quickly points out that “it’s OK to have a little coffee”.

When Minna’s calls to “push harder” only made me want to smash the TV, I had no problem following Leslie’s routine full throttle without her ever insisting on it. The only time I had to make an adjustment was when being 8 months pregnant (I bet even smug Minna would have to fold it at that point). There is certain calm reassurance in Leslie’s lead that makes me come back again and again to her routine. It somehow makes me feel good about myself while doing what I truly hate.

In the SAP world today we get urged to “push harder” a lot. Learn this and that today or you will become obsolete tomorrow. Buy this or that solution or the world is going to end (or even worse – SAP won’t meet the quarterly revenue goals). There is a lot of confusion, fear and frustration among even experienced SAP professionals that are at the crossroads with not much more than the Susanin-style roadmaps.

People are different and they are motivated by different things. For some fear and confusion might be great motivators. If you enjoy being yelled at by pretty ladies (no judgement!), then this blog might be more up your alley. But if you are more like me, you might be finding yourself paralyzed with fear and feeling depressed rather than energized. In this case I’d like to borrow from Leslie and invite you to… 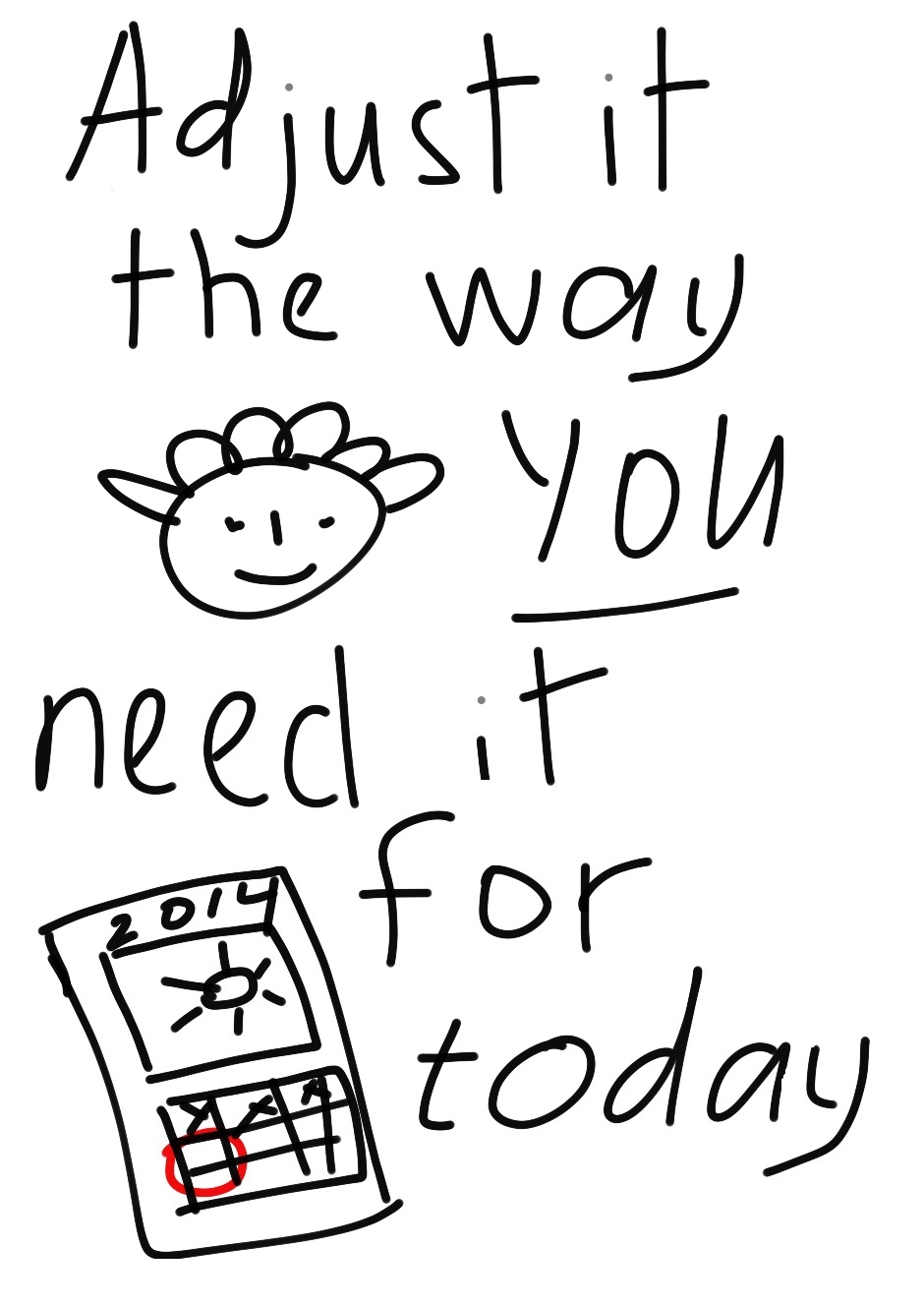 What if we take the confusion and fear out of the equation entirely? There are no roadmaps, no wrong leg to start with and no wrong pace to march at. No one is required to run a HANA server in a basement or surrender their credit cards for Amazon cloud services. Fiori is not your thing? I hear you! Desktops with SAP GUI work perfectly fine (really, everyone should still be thankful for the color monitors, c’mon people). Maybe instead of Eclipse you still want to learn about SAPScript or finally develop that mega-jumbo-super-dooper sales report. Or maybe you just want to learn to knit or shoot the crossbow instead. (Because come Zombie Apocalypse, what are you going to defend yourself with? UI5?)

If it is what you need today – go for it! The only mistake you can make is to do nothing and to learn nothing. Because, as Leslie correctly points out, if you stop moving – you lose your good health. And our minds need to “move” just as much as our bodies. “Sudoku a day keeps Alzheimers away” is no longer a solution – our minds are exercised only by learning new things. And that’s what I invite you to do. Not out of some FOMO or because someone tells you to, but just because you need it. Today.

What can be a better way to start new year than taking steps to take control and feel good about yourself? Personally, I’m planning to take another shot at Lumira desktop edition (because I like both numbers and pictures) and finally cook at least one recipe from every cookbook I own. And I’ll stop feeling bad about not reading every article in the Atlantic Journal magazine – having a subscription should already qualify me as a bona fide intellectual. As you see, it’s not a very impressive list. But that’s all I need for today. And tomorrow – well, I’ll just keep adjusting. 🙂

could be a Business Trend too 😉

I don't want to confess how many Leslie Sansone VHS/DVDs I have - I still use them several times a week.  She makes it go easy and fast.

As for the other tools and technologies, we'll get there one day but it may not be today or just as fast as some would like.  Always be learning 🙂

Thank you, Tammy and Jurgen! Wow, did not expect anyone to read SCN on January 1st. 🙂 Happy New Year!

Your advise is so true and I hope many regulars to this space take it on: never stop learning. Really, it doesn't matter what topics you set as your goal to learn as you will reap so many other benefits for your career: discipline; time management; research; trying new things; learning more about the SAP architecture which makes it easier to learn other topics.

Too often, I'm seeing the questions for career advise of what to learn and it's all HANA, Fiori. Analytics, etc. Their motivation to learn is all around job security and fear of becoming redundant. They will take on the buzz words and topics even though it is completely unrelated to their skill set, ability and interst - just so it can go on the resume. My worry, is if we all behave this way we become paper experts without depth of product knowledge a we jump from one new shiny toy to the next.

Taking the time to master your own area has it's benefits. One approach is to re-train in the topics you think you already know. This has bee my challenge for the past few months. I a constantly revisiting the basics of security (plain ol' PFCG) as I'm realising more and more that there are better ways to do the basics and things do change. It's not as impressive as HANA but it makes a huge difference on a client site.

Both ladies have strong skills in articulation! Thanks! TW