VIDEO: Planes, Cranes and Automobiles; How Anti-Collision Software Will Keep Them Safe

Anti-collision technology may be the biggest technology that enters its own during 2015 — in cars, at least. It’s got a ways to go in different spaces, but it’s already saving lives in others.

“Expect more vehicles to be fitted with anti-collision systems that automatically detect the cars around you and move the car into another lane if needs be,” according to one tech site’s list of predictions for 2015. “Manufacturers will also test systems to predict if a driver is about to experience a medical problem, such as a heart attack.”

Next year will begin a two-year rollout for Toyota vehicles with anti-collision packages, some of which will include a camera and laser radar. And next month, Volvo plans to unveil a new two-way communication system that works with cars, bicycle helmets and a smartphone app, which should help drivers and cyclists avoid collisions.

Look! Up In the Sky!

Above the roads, the cheapest of drones fly without any anti-collision measures. That’s one of the things holding up Federal Aviation Administration approval for these Unmanned Aerial Vehicles (UAVs).

“A fundamental principle of aviation safety is that pilots must be able to see and avoid other planes and objects in the sky — something that drones cannot do,” The Washington Post stated. “Most models are too small to carry radar, transponders and anti-collision systems that regular planes rely on to avoid crashes.”

But UAVs have tremendous business potential, so look out for pioneers to solve these problems — and for the FAA to establish minimum training standards for drone pilots.

One successful example of anti-collision technology at high-altitude is in tower cranes. French anti-collision software developer SK Group demonstrated how this works at SAP TechEd && d-code (#SAPtd) in Las Vegas this year, thanks to special software and hardware within all of the machines on a construction site.

“Honeywell sensors provide real-time information to the embedded computer, and the embedded computers are all connected together through a wireless mesh network,” Merlin Yamssi, SAP solution advisor expert in platform solution group, told me in a video at #SAPtd. “They can then apply an algorithm … to calculate the risk of collision.”

All of that information gets sent via Sybase Event Stream Processing (ESP) or Mobilink to SAP HANA system in the cloud. From the cloud, people anywhere in the world can monitor the work in real time via tablets and smartphones.

“When it comes to protecting the safety and wellbeing of workers who operate heavy machinery, there’s really no arguing the critical role of remote asset management,” Tim Clark noted in his blog post about the Hackers’ Lounge at #SAPtd. “If something happens to a crane operator, for instance, sensors can alert co-workers on the ground and also divert a potential accident by taking over the controls.”

This same technology kept SAP’s president of Platform Solutions safe from automated cranes that moved around the stage during #SAPtd’s keynote in Las Vegas. Steve Lucas wore the same type of high-visibility yellow construction vest and an RFID-enabled hardhat that workers on a real construction site would wear.

This technology will mature and spread to other industries in 2015 and beyond. As a result, construction workers — and everyone else — will enjoy the benefits of these lifesaving devices on the roads and in the air.

VIDEO: How New Tech and Trends Are Changing the Face of Vending Machines 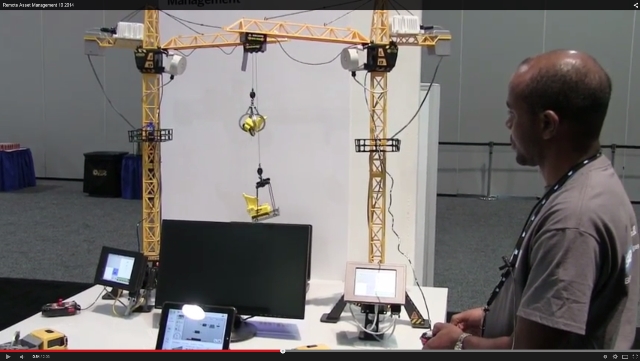