Things have been a little crazy around here, so this might be a little late for this year’s Christmas, but since this is IoT, you can take the teachings and hopefully it will inspire you to start your own project.  Also make sure that you tag your project as IoT so we can find it!

I gave a talk about IoT at an Open Source Meet up that was hosted on SAP’s Palo Alto campus.  The talk was a brief overview of IoT and how SAP sees IoT, then I talked about how we have prototyped different IoT projects using Open Source devices such as Arduino, Raspberry Pi, and BeagleBone Blacks.  As a demo of what you could do, my boys (5 & 7) and I built an IoT Christmas Tree that I showed off at the event. When the event was done, I received many requests of how I did it and what was needed to purchase to build it, both the hardware and software.  So here is the write up that should help you out to build an IoT Christmas Tree.

A Couple of Notes:

Put lights on a Christmas tree that can be controlled by a BeagleBone Black.  Then add some other sensors such as a temperature sensor and a buzzer just to make sure that the electronics don’t get too hot.  And send all of this data to a server (in my case, naturally the server the SAP HCP).

Step one: Hook up the LEDs to the breadboard to make sure that everything works.

Before moving on, I would do the same thing with another color.  In the drawing above, I did red and blue. 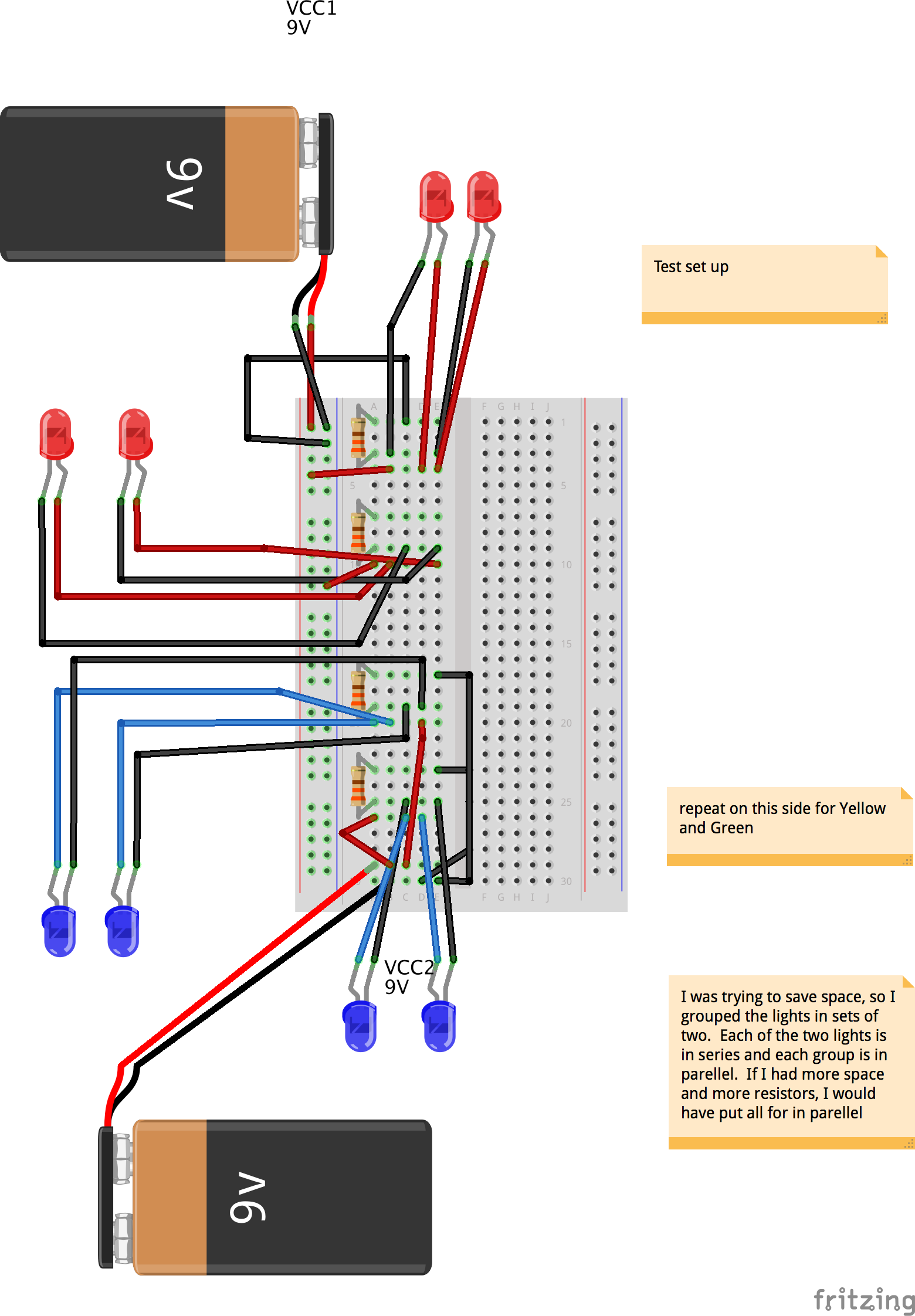 You now can replace the lights on the breadboard with the ones that you just created. The wires I used to solder the lights were stiffer than the jumper wires (standard 22 gauge wires), so I taped each pair of wires together and then taped the set together, just to make them more manageable.  Then I added a female to male jumper wire to the end so that the connection to the breadboard was easier.  Also, connected two lights together (in serial, so red to black) this way only one set of wires was going to each resistor.

Right now you have a Christmas tree with some lights, which is great, but you can’t turn each color on and off independently.  You can only turn all of the lights on or off.  To do this we need to add some transistors or a relay.  A relay is really over kill because they are designed to handle 110 to 220 V and a lot of amps, more than we will need to power our lights, but I have one laying around so I just figured that I would use it.

A relay is just a switch, and when you send a signal line to it, it toggles. 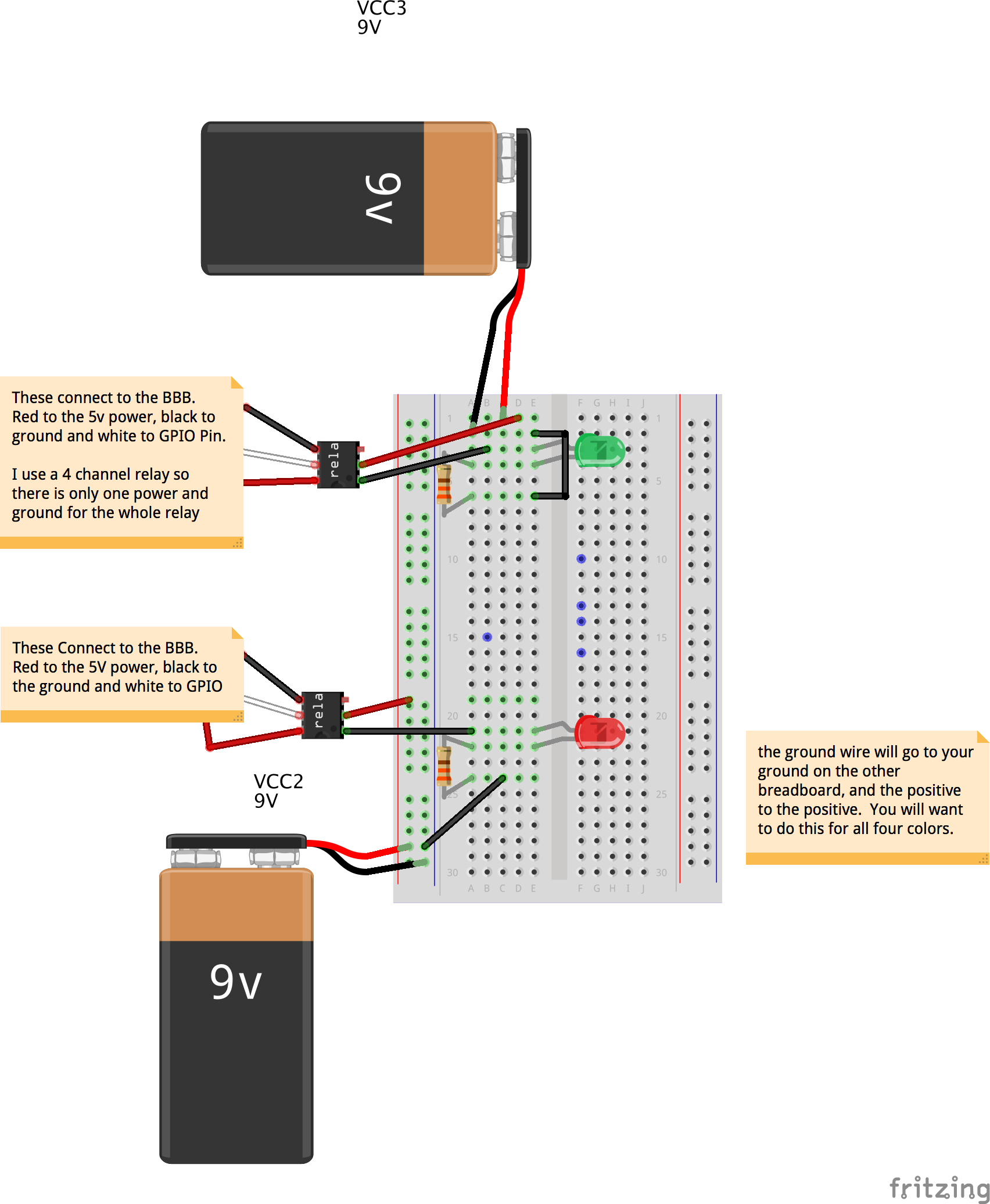 Part Three: Bringing Them Together

So we have our lights in our tree and our transistors all ready.  Now we need to hook up the four sets of negative/positive wires from the second breadboard to the one with all of our lights hooked up, and then connect the signal wires to the BBB. 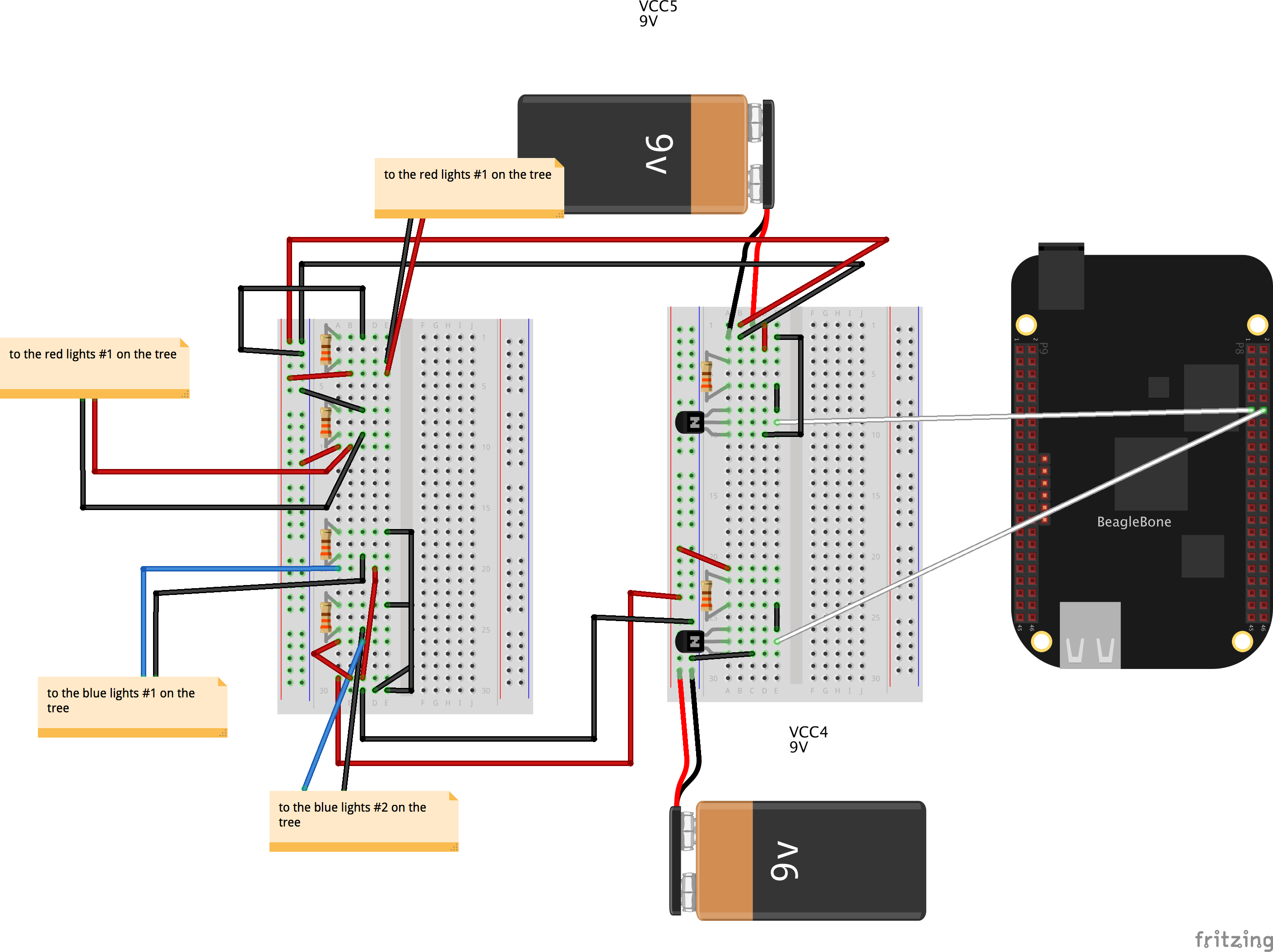 The code is in python, because BBBs have it installed already.  I think that the code is pretty straightforward.  The basic thing is that you just send a high or low to the pin and that will trip the transistor and flip it between on and off.

To make this truly an IoT device, I do send the data to a server, where we can monitor it.  Since BBB have Node.js, you can run your own server and control the tree from the web or any connected device.

So now everything is wired up and ready to go.  But it is just a large collection of wires sticking out of a tree, which doesn’t look good.  Well all you need to do is find a shoebox and wrap it up the bottom part as a present. Then flip the box over and then cut a hole in the top, in the center, for the wires, but not bigger than the base of the tree.  Then carefully unhook one wire and run the wire through the hole and hook it back up. Do this one at a time.

Finally put the box over the BBB and the wires and your are done.

Since you have all of this stuff working, why not just continue?  I added a temperature sensor and when the temperature goes over 40 C it makes a noise.  This is to tell me that the box is getting too hot.  The next step would be to have it turn itself off.

You could add a proximity sensor so that it blink more the closer you get.  Or have it tweet.  Hook up some USB speakers and play music.  Add anything that you want.

Another example about getting data into SAP HANA via a number of different platforms (RPi, BBB, Tessel,…)

HCP: An example on using a Raspberry Pi and HCP by Rui Nogueira

To get started I would buy a BeagleBone Black Rev C and an Ardunio starter kit.  This will run you about $150 but you will get a lot of sensors and wires that will get you going.