Now let’s look at the actually BI servers, like the Central Management Server, (CMS), File repository Server (FRS) and others.

By now you may have read about the -fips parameter on the SIA.  FIPS stands for Federal Information Processing Standard.  I cover this mode more in my data security blog.  The quick summary is that BI4 uses FIPS certified encryption libraries to perform its encryption.

Turning this switch on (add a “-fips” on the SIA command line), prevents usage of older clients and disables some older functionality.  If you do not have any xir3 clients or custom applications running against your BI4 system, there is no reason NOT to have this switch on.  Do expect this to become the default in upcoming maintenance releases, where you will instead need a special switch to turn ON old functionality, but by default, and xir3 or older client will NOT be able to connect.

It is not just about enforcing stronger BI4 security.  By disabling older functionality, you again reduce the attack surface, where a server not accepting calls based on older functionality will be harder to exploit.  If you’re familiar with the POODLE attack, you’ll know for example that the latest recommendation is to outright disable SSLv3 protocols and use strictly TLS.   A similar concept applies here .

Creating a special locked down user to run BOE can be worthwhile.  The built in windows system account is actually quite powerful

The rights required on the local computer where the SIA is running are as follows:

-Logon As a Service.

The important part here is the account should NOT be an Administrator on the local machine.

The how to steps for server to server communication encryption are detailed well in the BI4 admin guide, as well as in this online wiki for unix

The client configuration is detailed in sap note https://i7p.wdf.sap.corp/sap/support/notes/1642329

How much of a performance hit can you expect?    It really depends on many factors, there is often a tradeoff in performance for security, but a rough guidance can be a 10%-20% impact based on what I have seen so far.

This is an important server to protect, because it contains your report content on the file system.  If the reports are saved as PDF or saved with data, that makes them very valuable to attackers.  There are a few additional things you can do to protect the content.

-Virus Scanning.  For large deployments and heavy usage, this can be a big bottleneck on the I/O to the point that performance visibly suffers.    For performance reasons, you may consider running scheduled scans in “off hours” rather than real time virus scanning.  By far, real time virus scan is more secure, but you can further mitigate with locking down what users can upload. 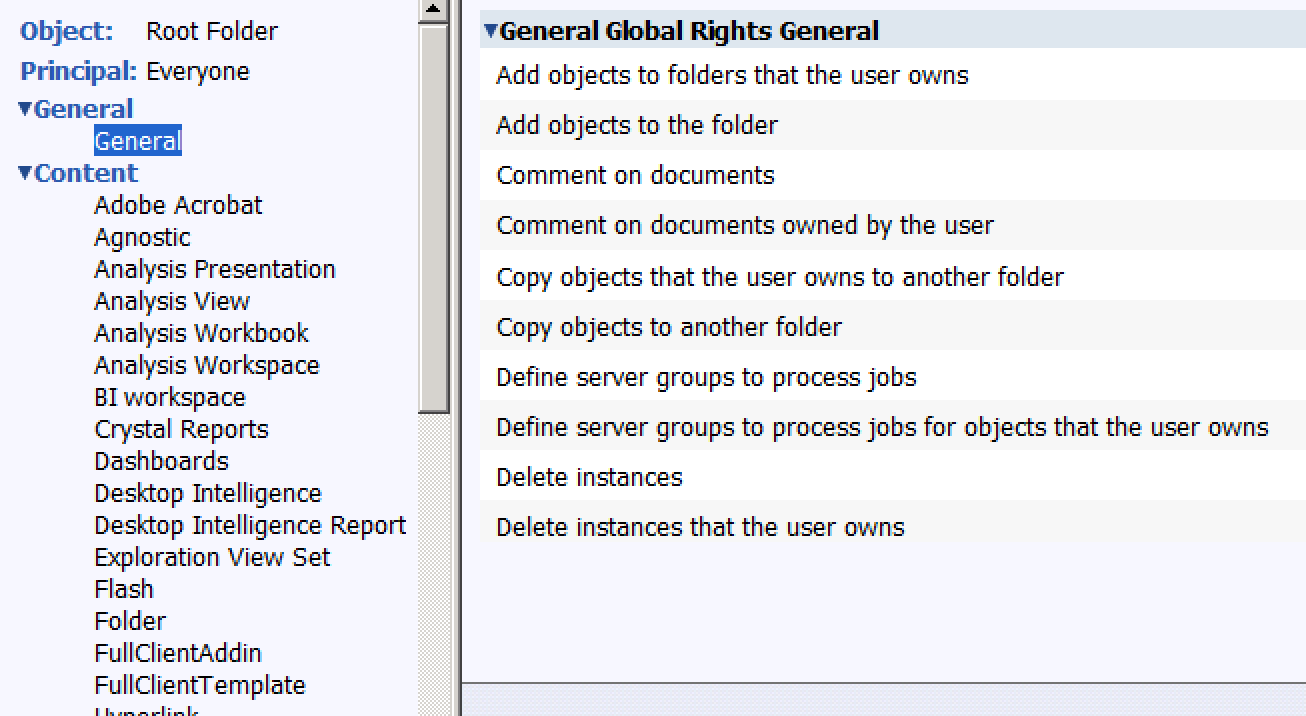 Rather than granting the generic “Add Objects” right, you can actually lock it down to content types, and only permit CR, Webi etc types of documents.  This will prevent a user from uploading a bad executable or batch file, that another user then downloads and executes on their own machine.  Of course one would hope that end users would know better, but prevention is your best defense.

All BI installations start with a default “Administrator” account.  For a potential attacker, that is one known piece of information for trying a brute force attack.  Enabling auto lockout for failed attempts will certainly help mitigate this, however another thing you can do is to rename the default account.  Instead of “Administrator” use your own naming such as <Company>_BI_Admin.  For example SAP_BI_Admin.

Have people left the company?  Maybe never even logged in?  The less accounts you have, the less chance of an old stale password falling into the wrong hands, or accounts being misused.  It is again about reducing attack surface.

The following query, which you can run using the AdminTools console, will return to you a list of users by the last logon time.

Below is a stripped down sample output.  While these users may have content in personal folders you don’t want to lose, consider disabling the accounts. 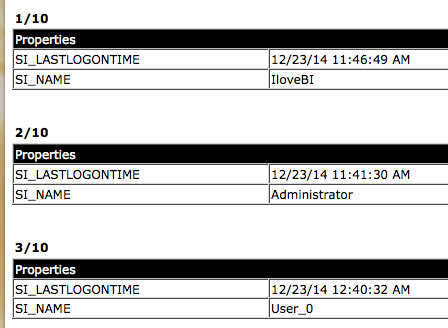 Firewalls help you reduce the attack surface.  In the simplest, happiest (from a security standpoint) workflow, all your users are web users, and will only be connecting to BI Launchpad.  In this case, the BI servers can be fire-walled away from the end users.  However chances are you also have thick clients connecting.  In this case, make sure the thick clients are limited to connecting from a trusted network zone, if networks are partitioned.

You can bind servers to a specific port in the CMC.

By setting a specific range of ports to use or binding to specific ports, you can then use a firewall to further lock down and reduce the attack surface of your servers.

Keep in mind that thick clients must be able to communicate with the CMS, as well as the Input and Output file repository server.  There is a fairly complete overview of the server port communication described in the administration guide, section 8.14.2

Your IT may have also put your database layer into a separate network zone, inaccessible to regular workstations.  Yes, IT is making your life difficult, but for a good reason in the classical 3 tier architecture.  Clients can and should (for security purposes) connect through the BI platform which in turn connects to the database layer.  This extra hop makes it more difficult for a connection to abuse or attack the database layer directly, where all your valuable data resides.

The communication between the BI processing servers and the actual database can, and from a security standpoint should be encrypted.  To help you decide, a threat model should be done.  How sensitive is the data, how isolated are the data sources are just two considerations.   Generally, one should assume that their network HAS been compromised, and build out a security in depth approach.  It is quite easy for someone in your company to fall for a phishing attack.    You can set database encryption at the driver level, below being an example of a sql server driver: 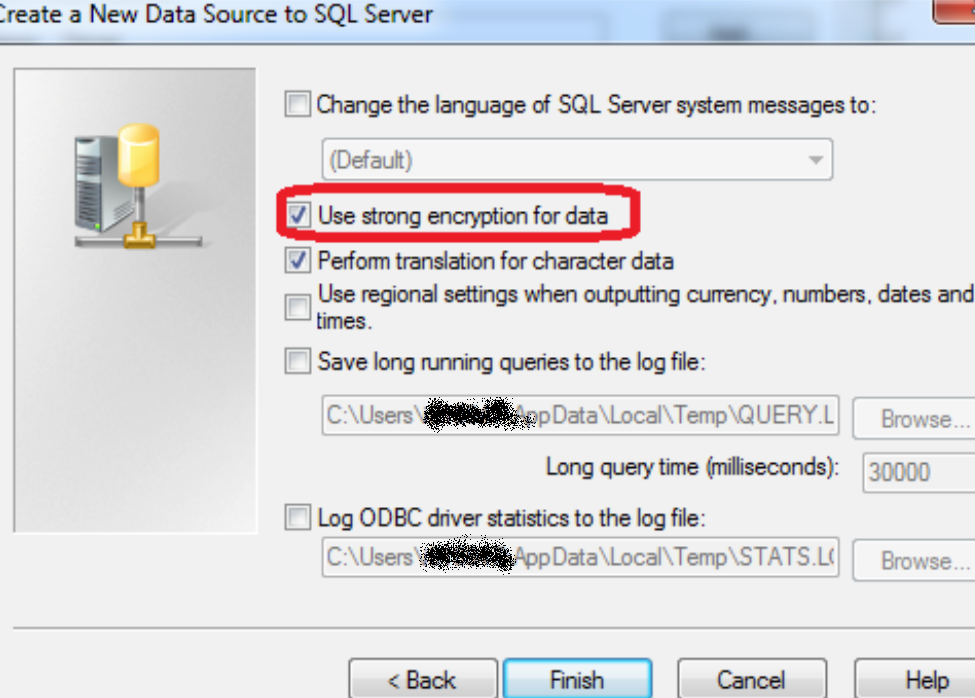 The CMS repository does not store any data in your reports, however it can store sensitive metadata such as connection information.  This is automatically encrypted using a two key mechanism as part of the BI4 build in encryption.  Again, this is described in my encryption & data security blog.

Using your database vendor’s built in database encryption to encrypt the whole data may actually be overkill here, and is actually not something that I would strongly recommend as being necessary, but certainly a valuable ‘security in depth’ principle option.   The advantage of selectively encrypting content, the way the BI4 process does is that you do not suffer performance hits on non essential data encryption, such as the metadata associated with a report’s layout.

During document creation and processing, temporary files will be created, and they may contain some data.  Have a look at your temporary folders, and lock these down to the process that the SIA service hosting these servers is running under.   See below for the Crystal Reports processing server as an example.

Placeholders like “%DefaultDataDir% and others are defined under the placeholders tab of your Server Properties.

Keep up on vulnerabilities with security notes

One additional change could be to add the -whitelist parameter to all job servers which have Unmanaged Disk as one of their destinations. In essence, it locks down the folders the user can export to (as the result of a schedule).

The parameter is described in detail in SAP note 1759784.

I'm not entirely sure if it's implemented in BI4, as the note only references XI 3.1

Creating a special locked down user to run BOE can be worthwhile. [...] The important part here is the account should NOT be an Administrator on the local machine.

Remember that additional authorizations might be required depending on the setup.

E.g. Windows AD authentication requires the following (according to the Admin guide for BI 4.1 SP5, section 9.4.4.2):

The account must specifically have the “Act as part of operating system” right.

The account must specifically have the “Logon as a service” right.

Also, when the SIA hosts the FRS servers, make sure the account has access to the FRS path as well (thus not only the installation folder).

Thanks for this nice blog series on BI4 security!

Unfortunately, the link to the Wiki for CORBA SSL doesn't work (anymore?) and the mentioned KBA is not released at the moment.

Can you please provide some usable information sources concerning this topic?

Thanks for catching the issues with the links, should be fixed now.

Thanks, the link to the Wiki is ok now,

but the link to the note is still not working.

I assume it's a SAP internal link.