I’m very happy to announce that yesterday morning the sitfra wiki page went online and the registration for the first SAP Inside Track Frankfurt ever is officially open!

Already over 20 people registered in the first 24 hours and seven talks have been entered on the wiki page – not bad, considering that Christmas holidays are around the corner 🙂

To get yourself registered, head over to: http://www.sitfra.de

While we made our intent to host an Inside Track in Frankfurt public – first in June in Hamburg at sithh and later in Munich at sitmuc – we only got confirmation for the office space we wanted to use during the week before sitnl (Inside Track Netherlands). Hence we were very happy to officially announce at sitnl that the SAP Inside Frankfurt will take place on the 21st of March 2015 with a live tweet during the conference wrap up:

Fred Verheul captured the moment of the announcement from Christian Braukmueller and me live tweeting on my phone perfectly. We are looking forward to take over the baton and carry it on: 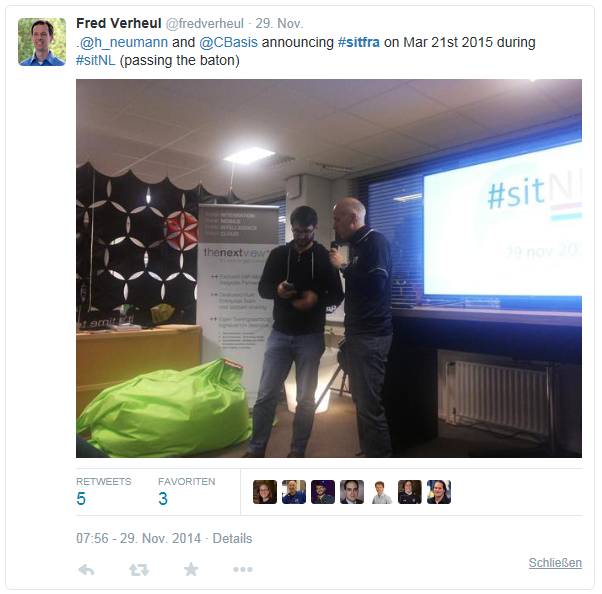 While we are more than happy to welcome international guests and community members from all over Germany, we also consider the Inside Track in Frankfurt a great opportunity to nurture and grow the local community in the Rhein-Main region around Frankfurt. Since last summer we have our own regular meet-up with the SAP Stammtisch Frankfurt and when we presented the idea to host an Inside Track at the Stammtisch’s Christmas meet-up, the response was hugely positive! Some of the attendants were already aware of our initiative, others didn’t know the Inside Track concept at all but close to everybody was eager to learn the details and promised to add the event to their respective calendars.

As the event’s preparation moves along we’ll be updating the wiki site with new information when available and keep you informed in the Inside Track’s blog space or follow us on twitter for updates: @_sitfra

See you in March in Frankfurt!

Thanks for the sitnl mention (and picture). Look forward to join sitfra. Hope we can get as many Dutchies to Germany as Germans to the Netherlands on Saturday November 29th 😛