SAP Mobile Documents makes its first stride towards a metro ui based client for Windows devices.

With SP3 patch 1 for Desktop Client, now we also have a metro ui based companion app for desktop client for Windows 8.1 tablets. In this blog, I will introduce you to the new app, explain how you can install the app and share my first experience with the app.

(I have re-sized images to small thumbnails in the blog for better readability. Please click on the image to view the image in the original size)

The new metro app is a companion app for standard desktop client for PC.

For the complete setup to work properly, both metro app and desktop client should be installed on the device.

The Metro UI app can only be installed via side-loading mechanism. It is not available on Windows Store.

Once the metro app is installed, you will see can launch it from your programs list. The app is called “SAP Mobile Documents Modern UI” 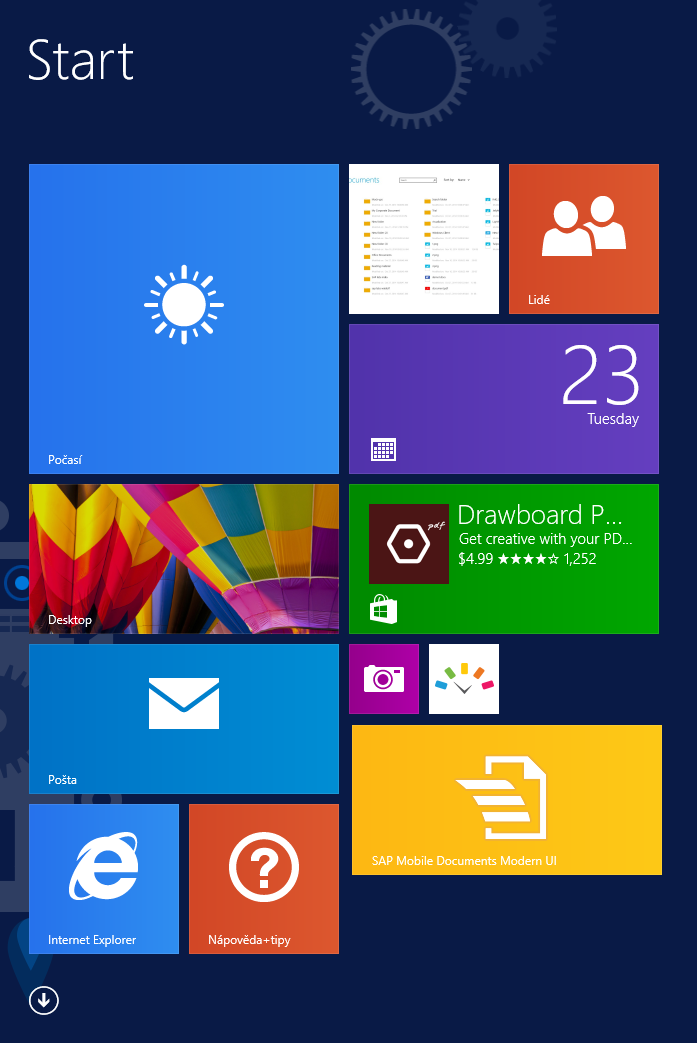 When you launch the metro UI for the first time, you will be asked to select the Mobile Doc root. Select the mobile doc root which is normally, “c:\users\<user-name>\Mobile Docs”. 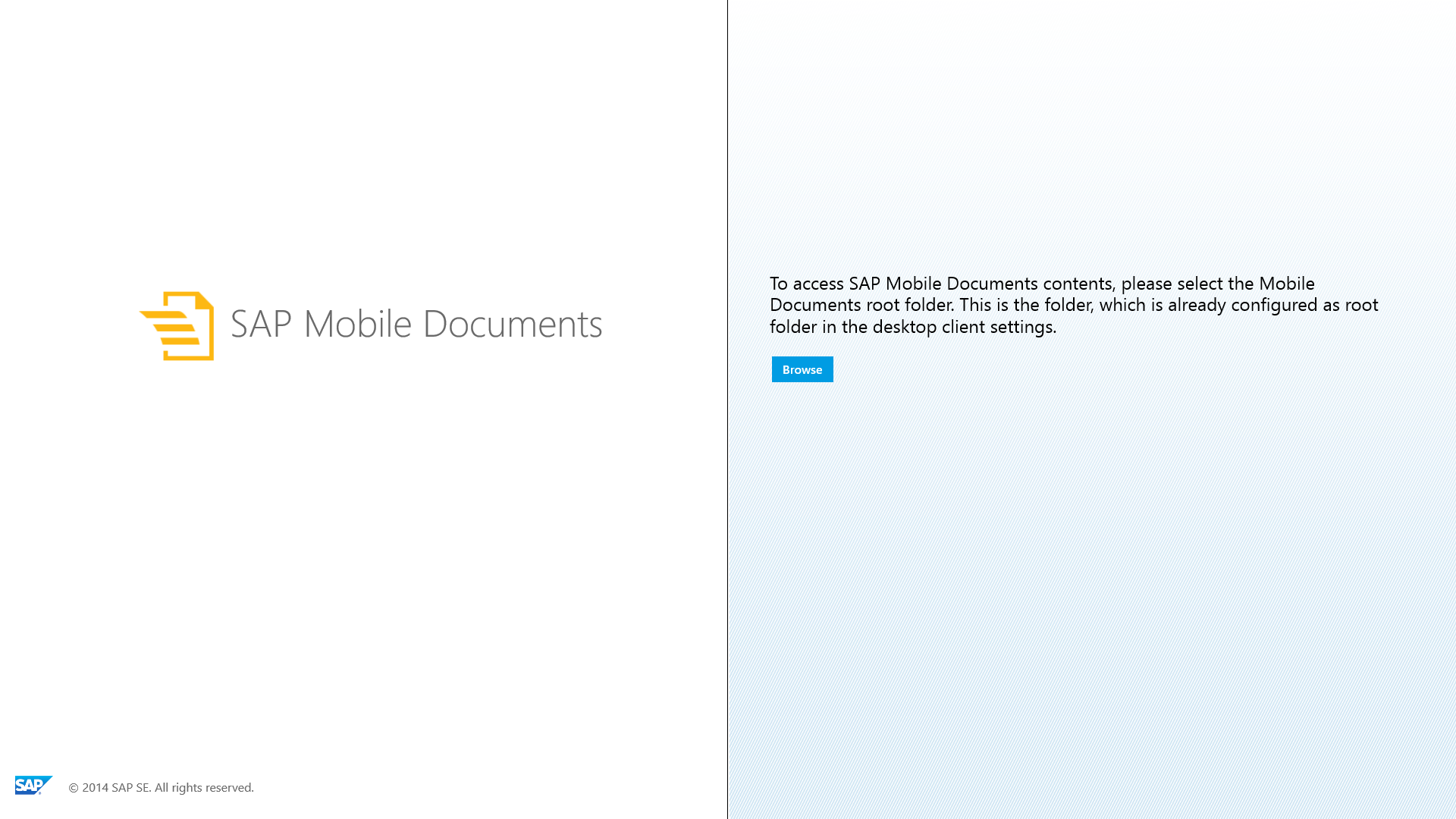 The metro app is ready to use 🙂 . The first screen will be, as in the following image. The metro app presents the content on your file system. Some nice features you will notice are:

To view documents, just tap on the documents in the metro app. The app will give options to open the file, based on what relevant programs exists on your device.

From the program list, if you select any metro app, the document will open in viewer in the same screen. 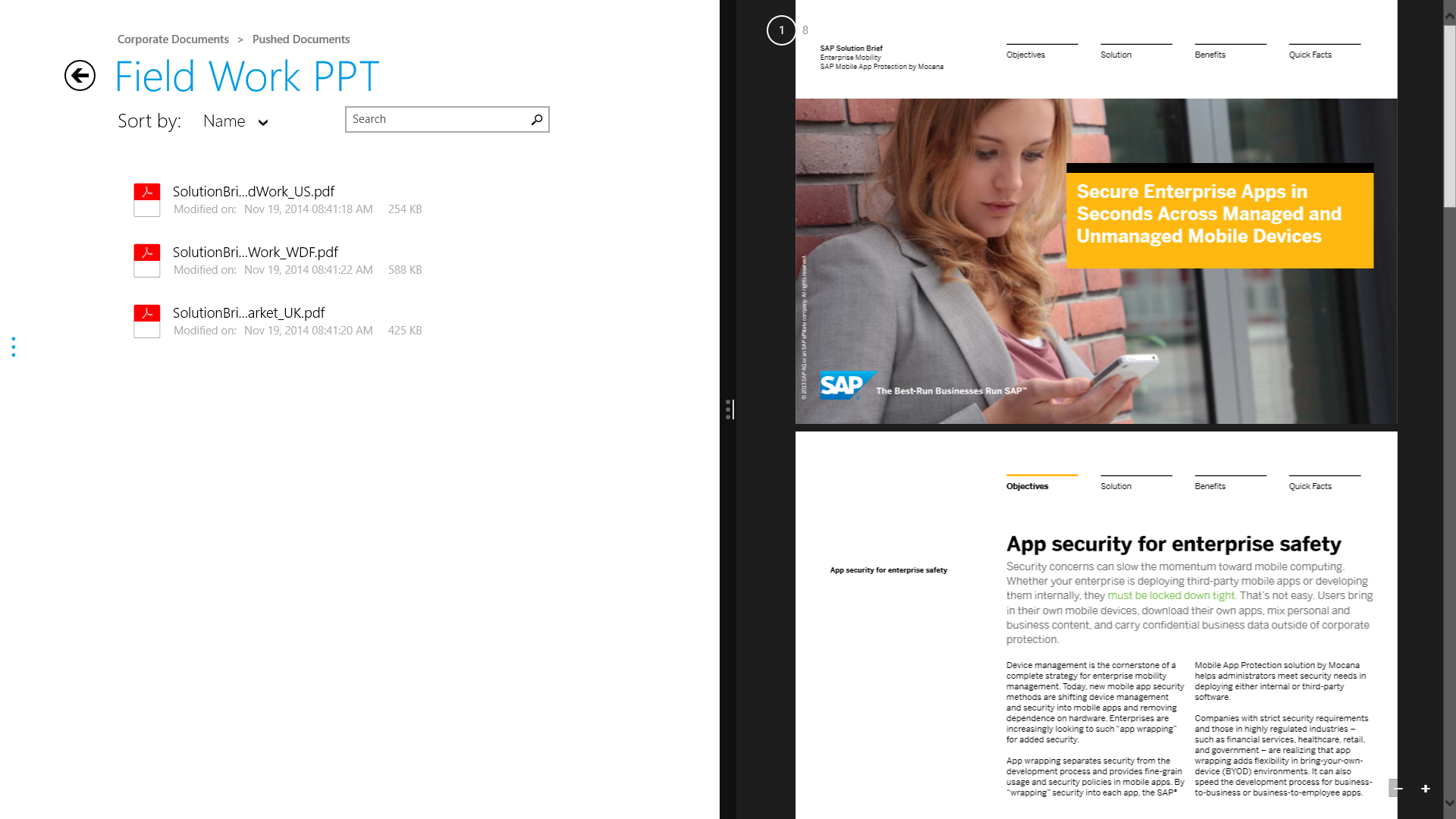 I've carried out the actions for enabling the the correct settings for side-loading (Configure PCs for Side loading requirements).

But when I try to install the appxbundle file (with "add-appxpackage <full path to the appbundlefile>") I get the following error message:

"add-appxpackage : Deployment failed with HRESULT: 0x800B0109, A certificate chain processed, but terminated in a root c

ertificate which is not trusted by the trust provider.

error 0x800B0109: The root certificate of the signature in the app package or bundle must be trusted.

Apparently, I need a certificate to install the bundle file?

Please advice how I can install the Metro app.

Can you try this command.

To reinstall the app:

Unfortunately, it did not work. Actually, I can't see the application at all anymore.

As I had the metro "icon" (tile) of the application, I uninstalled it via the directions above.

I got the following result:

But: there is no icon nor tile present after this action!

I searched my installed apps on the laptop, but there is no "SAP Mobile Documents Modern UI" is present!?

Not in my application list and also not when I try the Windows search. And it's not listed in my installed applications in the "add & remove programs" section.

I've also executed the "get-appxpackage" command, but the application is not listed in the list this command produces.

I've also tried to install it with a newly downloaded file from SWDC, but with the same result: I get no error message and the result:

but no application present 🙁 .

Can you please try the previous command ?

Do you have multiple user accounts on your machine?

I tried the above account, but with no success. I still get an error message:

add-appxpackage : Deployment failed with HRESULT: 0x800B0109, A certificate chain processed, but terminated in a root certificate which is not trusted by the trust provi

error 0x800B0109: The root certificate of the signature in the app package or bundle must be trusted.

I have successfully installed the program, but now the app shows the message "no repositories configured".

How can I configure the repositories for the SAP Mobile Documents Metro UI App?

For example, I can add in the iOS App the server path in the settings, but in the Metro UI App I can't find the setting.

Have you an idea?

Have you already installed the Desktop Client for Windows ? If yes can you check if the folders are present at <user_home>\Mobile Docs\ using file explorer.

I have the app installed again. I think the path was wrong. Thanks you!

Great to know that it works. Looking forward for your feedback.