Usage of Worklist Functionality in Asset Accounting-Part I

On numerous instances an entity might want to carry out mass retirements, mass transfers or mass changes to asset master data. For example, an organization might dispose a major portion of its Fixed Account and might have to account for the retirement of the same in its books.

The usage of worklist functionality for each of these instances is explained subsequently. Basically this functionality would involve two steps:

a) Grouping assets for which similar processing has to be done-this is achieved by creation of worklist. b) Releasing the worklist so created which would complete the processing on the assets(i.e. transfer, changes or retirement).

This document would describe the usage of worklist functionality to carry out mass retirement with revenue and without revenue and mass intercompany asset transfer The other instances i.e. mass changes to asset master involves some additional steps and are described in Part II of the document.

2.1  Retirement of Assets (without Revenue)

For creation of worklist, following is the path:

At this stage we enter the company code, asset number and asset sub number of the assets which have to be retired. There is possibility of giving additional selection options like asset class, cost center, plant also as given in the screenshot below: 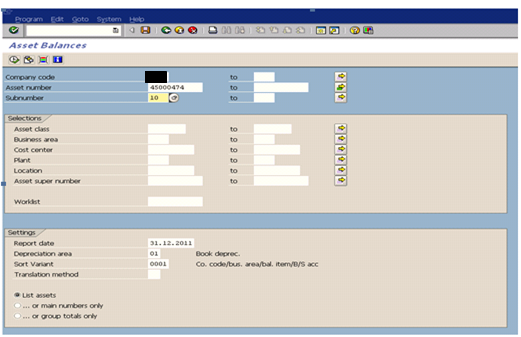 Thereafter we proceed to create the Worklist by clicking on the ‘Worklist’ tab in the following screen that appears on execution: 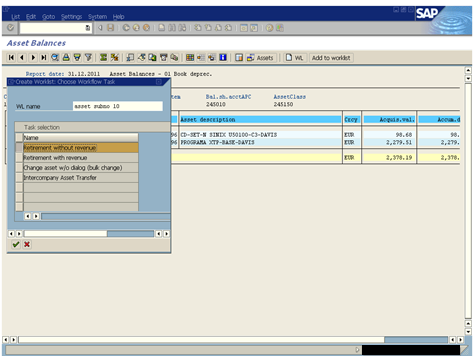 In addition, we enter various other parameters like the posting date, document date, asset value date and transaction type for posting the mass retirement. The text that has to be populated during the retirement also has to be entered.

On doing so a work queue gets added. All the selected assets which we need to be retired get added to this work queue. 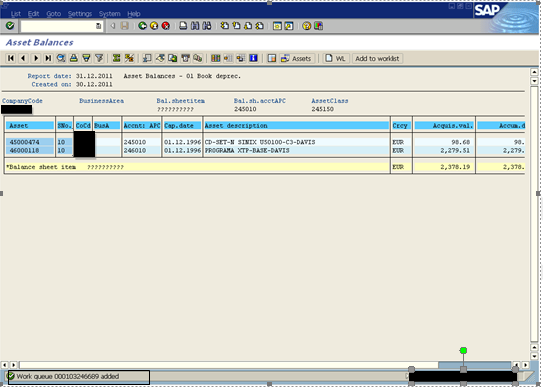 Once released, the following screen appears: 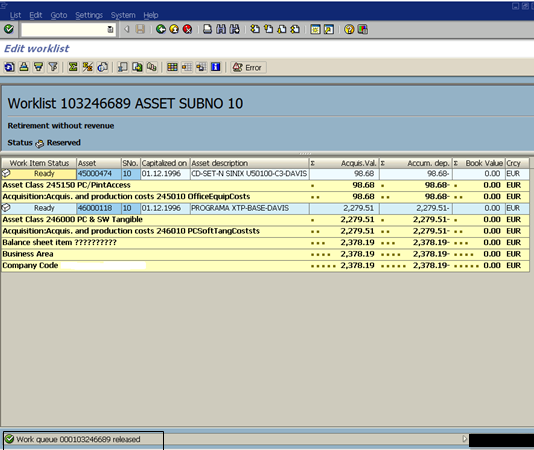 The entry that gets passed is given below. The accumulated depreciation account is debited and the corresponding asset account is
credited. The text given at the time of creation of worklist gets populated here as shown below:

2.2  Retirement of Assets (with Revenue)

The assets that have to be retired are added to a worklist by using transaction AR01:

An additional step that has to be followed in case of retirement with revenue is to determine the sale proceeds that will be realized from the assets and the proportion in which the same will be distributed amongst various assets.

The manner of distribution of sale proceeds can be either of the following:

Once the same is determined, a work Queue gets added:

The same is then released in transaction AR31 for release of worklist: 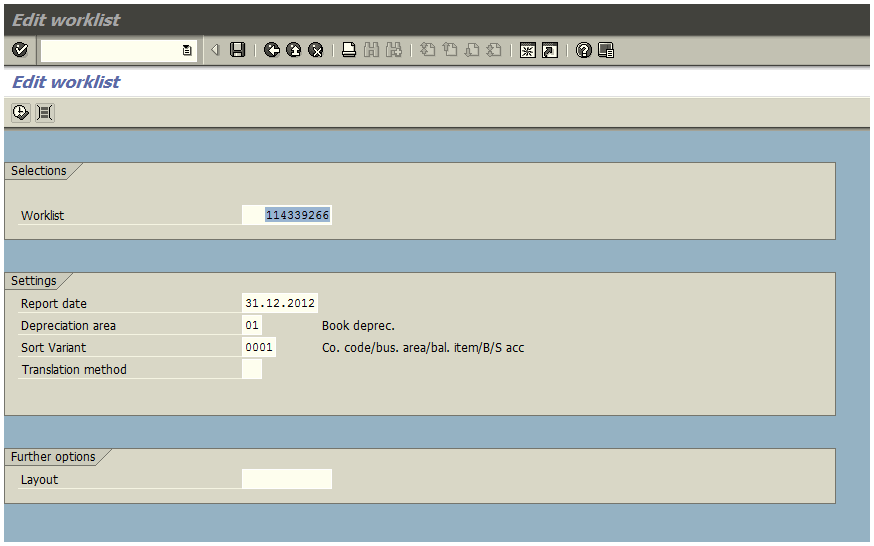 The status changes to completed when the processing is complete

The accounting entry that gets generated on retirement is described below:

Since the asset was fully depreciated,  accumulated depreciation and asset account is fully reversed. The entire proceeds from sales is  taken as revenue. Revenue of100 EUR is distributed in proportion to the acquisition cost amongst the three assets that have been retired.

Assets Transfer from one company code to another mainly happens in case of restructuring of an organization when a change in company code is necessitated. The standard transaction for executing this is ABT1N.  However when an enterprise desires to do a mass Inter company asset transfer in SAP,  the same can be made using the worklist functionality. Like retirement of assets, this involves creation of worklist and release of the same.

A worklist as described above is created using the transaction code AR01. All assets that have to be transferred are given in the selection criteria as shown below: 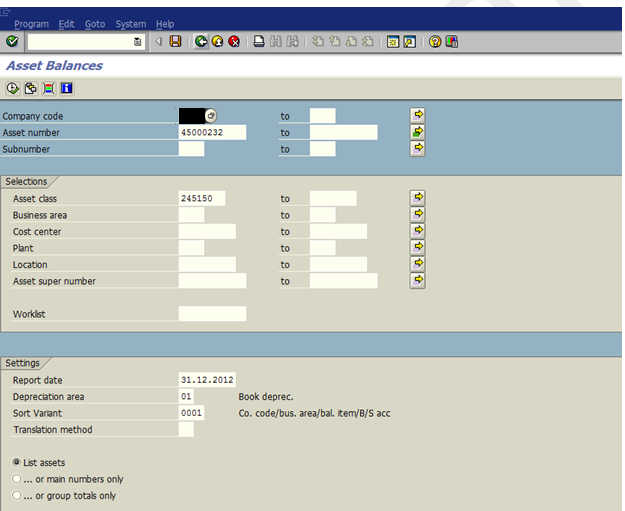 These assets are then added to the worklist as shown below:

In the selection screen that appears subsequently, the target assets to which the transfer has to be made is given. The transfer variants have to be selected based on the options available in the dropdown The transfer variant specifies the valuation method and the transaction type for posting an asset transfer:

As described above in retirement, a work queue gets added and the same has to be released in the transaction code AR31 as below: 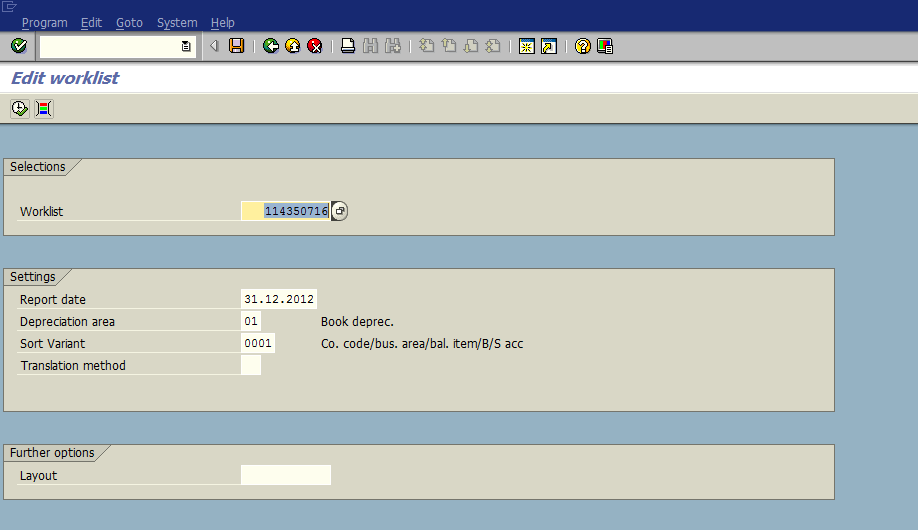 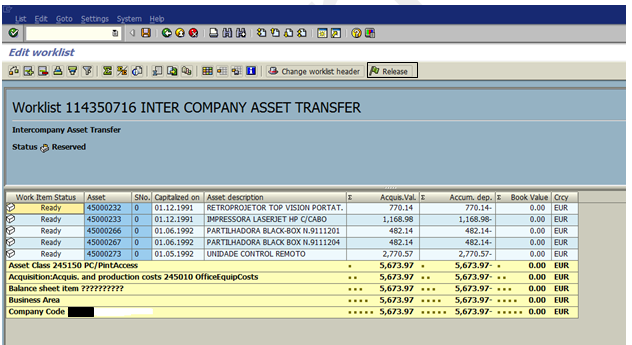 Once the transfer is successful, acquisition cost and accumulated depreciation value becomes 0 in the books of the transferor company: 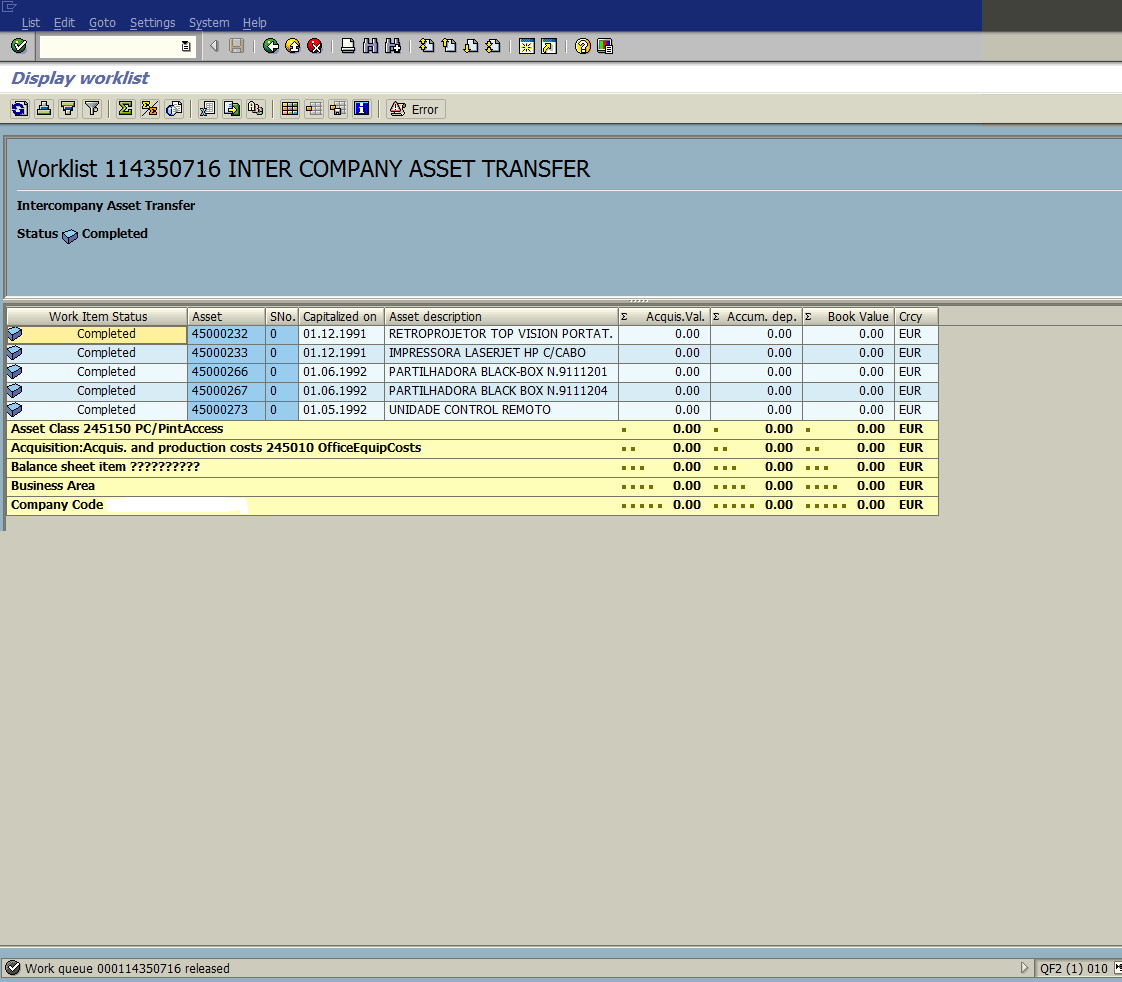 The entry that is passed at the time of retirement is as follows:

In the books of transferor company, Asset Account is credited and the accumulated depreciation account is debited.

In the books of the transferee company the reverse entry takes place.

The usage of worklist functionality for mass changes to asset master would involve an additional step, i.e. creation of Substitution Rule. These are described in Part II of this document-the link for which I shall update shortly

Nice document. Thanks for sharing the knowledge.

We intend to 'retire without revenue'. The delta between APC and Accumulated Depreciation, is posted to a non-preferred P&L account. Can you indicate where this account is defined?