ABAP Development for SAP HANA was offered from the end of September through to almost mid- November 2014.  This four week course was originally scheduled to conclude on October 30, however, as we received a lot of requests from those attending SAP TechEd && d-code, we decided to extend the course deadline to November 10.

The journey during this course was an experience by itself. With the preparation which began almost 4 months before going live, it involved dynamics as much as producing a film.There were many discussions back and forth regarding content development, video production, creating transcripts, making the systems available through various channels and so much more.

Dr. Jasmin Gruschke and Jens Weiler – the presenters and content owners played different roles to bring you this course.

The shoots during the video recording are definitely worth a mention. All the units had to be delivered in one take.  I must highlight that, with baking in those 2,000 watt lights, trying to retain their best smile and composure was really a force to be reckoned with. When, it seemed a perfect take for us behind the camera, presenters thought that the message was not very clear, and decided to re-shoot.

In spite of some odds, we could finally package the course well.

The goal of the course is that users would understand the important concepts in ABAP development for SAP HANA, how to detect and analyze the performance of ABAP coding, and which features AS ABAP provides for database-oriented programming.

As the course just concluded, I would like to present some statistics which may interest you –

As we focused on this technology topic, we saw a very encouraging enrollment that peaked to almost 23,000 enrollments at the time the course concluded.

As the course concluded, 200,000 self-tests had been submitted, which was quite overwhelming.  This has also translated to a good success rate in the weekly assignments and the final exam.

The hits on the video lectures also recorded 200,000.  We had around 20 video learnings – 5 for each week and judging by the numbers, it is indeed quite encouraging to see that each video had at least 10,000 hits on an average.

The graphical presentation of the enrollment dynamics  reflects a good strong demand for the course offering. Within the first week of announcing the course, we saw an encouraging rise in the enrollments. 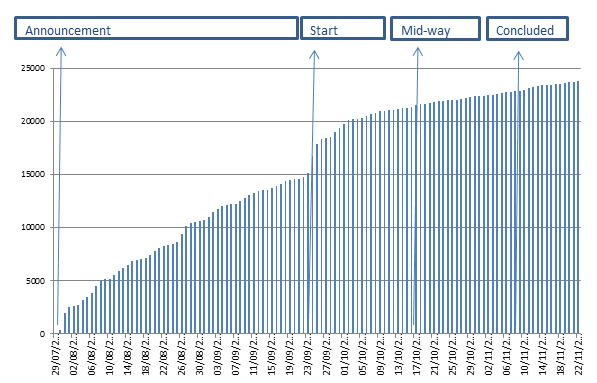 During the course, many of our participants and our presenters,  attended SAP TechEd && d-code in Las Vegas where they took part in SAP Code Jam and SAP Inside Track. The openSAP team was also kept busy meeting participants at the SAP Fiori Café, where conference attendees could enjoy a good cup of coffee while learning about SAP Fiori during the developer conference. Many conference attendees signed up for the course while at the event!

The participants came from 120 countries, with about 14 countries above the 1% threshold.  Learners from India accounted for 38,92%, followed by US 11,46% and Germany 9.82%.  This trend has been visible in all the courses at openSAP and also for the ABAP Development for SAP HANA course.

A significant increase in Brazil to 4.78% is very welcoming.  It’s overwhelming to see how learners in different time zones, worked on the course and adhered to the deadlines 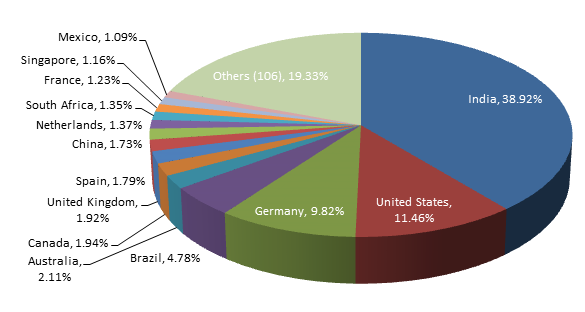 The average participating age for the ABAP Development for SAP HANA course was 33.66 years. This can be interpreted that a large number of professionals took part in the course. 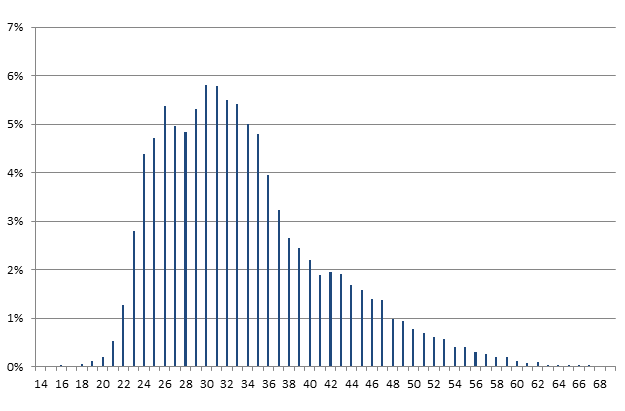 The discussion forum had a good flurry of activity.  For a four week course, the activity recorded reflected the deep investigative interest by the users.

Spanning over different topics on the course, ranging from technical, administrative, feedback, costings, etc, the discussion forum recorded around 475 threads that were put up for discussion, resulting in more than 2,225 posts.

The new platform had some new features which helped the openSAP team to highlight some hot topics to be pinned up.  This enabled an information flow that benefited the participants.

There was a lot of traffic on the ‘I like I wish’ with the participants giving feedback on the course, the future proposals etc

Here is a selection of feedback from ‘I like I wish’

thanks! it is a clear demonstration, can work on serious topic with humour&fun.

I did like the idea to place in a scenario common mistake, observe and and fix them. the video become more interactive, and it engrave the point in the memory.

the session was also clear to enable Non-dev people to follow. THANK for this excellent MooC.

Great job, and I hope to see you two again in future courses! One wish from me — I’d like to have an option to do exercises in the local HANA system (as I finally did with some extra peeks and pokes)

Releasing the course material for every new week on a Thursday is a great idea. Because the material can be studied on the weekends (which is pretty early compared to the weekly deadline). And if at all it cannot be done on weekends, we would still have 4 days left!! (4) During the demos, whenever a keyboard shortcut was used, the used shortcut was actually displayed on the video. That is a very useful feature. (5) Dr.Gruschke’s presentation was very organized and lucid. (6) Lecture Transcripts are a life saver !! (7) Having all the relevant source codes in the slides directly was very useful. One does not need to download the “codes” seperately. Moreover, on downloading the codes, I get an OOXML file which I am not able to open with MS Word/Notepad ++ etc. How do I open that?

Currently, in the quizzes and the weekly assignments, there is no explanation for “Why/why_not is a particular option correct?”. For straightforward questions, this is okay. But for questions that are tricky, with options very close to each other, having some explanation would be very useful. This feature is available in OpenHPI So, I definitely feel, it should be available in OpenSAP also. 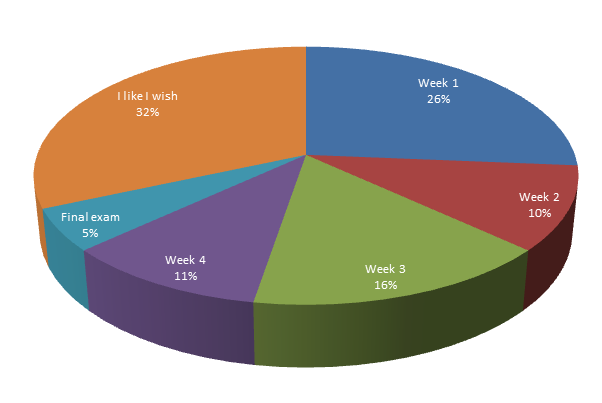 It was a mixed bag outcome.  We had participants who wanted to complete the course just to understand ABAP Development for SAP HANA, while the others were keen to learn as well as receive the record of achievement. 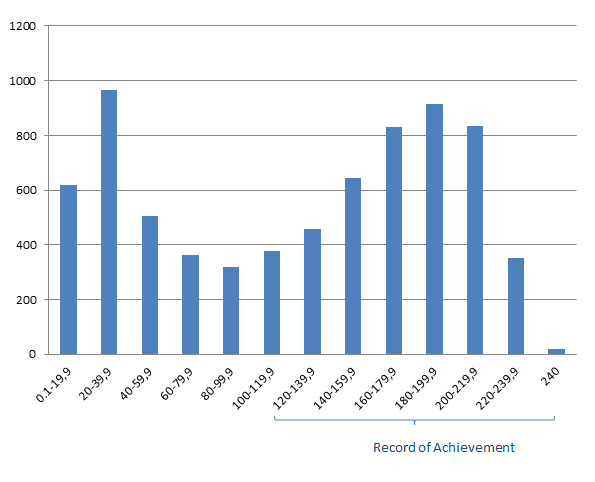 In the above, success rate was high compared to the other MOOC offerings.

With over 4056 RoA documents issued, almost 20% of the enrolled participants, which we counted mid-way through the course, earned a Record of Achievement.

Congratulations to everyone who learned through this course.  It is indeed a very encouraging having this response.

More on the RoA – The minimum score to achieve the RoA was 120 points. The maximum points were 240.

Since we also publish the top 5%, 10% and 20% in the RoA, the thumb rule is that top 5% are those who have scored 95 percentile and thereof respectively.

Finally, before signing off, the outtake video that was released added a different perspective to the course.  The participants appreciated the efforts of the Jasmin and Jens who were naturals in front of the camera and delivered the course with high quality content.

Concluding my blog, I would like to thank one and all for their contribution in this course.

This course generated a great interest among all communities and the activity in the discussion forum, the assignment submissions, a comparably high success rate, good penetration of the course participants, and makes the team and I think that it would be a good idea to offer this course once again.

Disclaimer – please be aware that all the metrics, interpretation are my personal opinions.  It remains to see how you perceive this information from your point of view and will welcome your feedback.

* We decided to use the number of enrollments we counted in the middle of the course. Why? Because we say that all people that enroll until the middle of a course have (still) a realistic chance to complete it with a Record of Achievement.

thanks for the metrics, but do we really need the Enrollment Dynamics and Active participation and completion rate ?

Looks like this is only usful for openSAP itself.

The course was great and presented well so I can recomment it to every potentials.

Many thanks for the feedback and your patronage.

It is indeed great that you would endorse the course.

See you on openSAP

I enrolled for the ABAP Development for SAP HANA course, after completion of week 1, am not allowed to take assessment.

Can you please help me with this, I will like to complete the entire course and get the credits.

To earn points, you will need to complete the course if it is repeated in the future.