This article is about the connectivity data of an SAP Netweaver ABAP instance which uses a SAP HANA instance as its primary database.

To get everybody on board, MDC stands for HANA Multitenant Database Containers which is available with SP9.

These are the parameters of the system:

The connection data to between the ABAP kernel and the HANA database instance is done via the so-called hdbuserstore which is part of the HANA client software.

The connection is always established via the userstore key with the name DEFAULT.

For non MDC HANA instances (single database instances), only the hostname and the instance number are necessary to build the connection string which is: <hostname> + 3 + <instance number> + 15 . In our case it is: ld2426.wdf.sap.corp:30015

In case of HANA Multitenant Database Containers it gets a little more complicated.

In case a HANA instance is installed as MDC it becomes the host for multiple instances which are called: Tenants.

To be able to provide seperate connectivity to each tenant, 15 can’t be the only indexserver port. Due to this the connection string gets another variable:

<hostname> + 3 + <instance number> + <tenant port> . There is only one fixed tenant port which is 13 . This is the port to the so-called system database.

The system database is some kind of master tenant used only for administrative purposes like:

In case you are about to migrate your single database to MDC you don’t have to worry about the connectivity.

The current port 15 will also be the port of the tenant which hosts all data of the former single database.

The HANA database from above is currently a single database instance:

After the upgrade to SP9 the migration to MDC is very simple.

As you see in the picture above the Statisticsserver process needs to get migrated to run inside the indexserver.
Check the note for more information: 1917938 – Migration of the statistics server for Revision 74 or higher

Once the Statisticsserver runs inside of the indexserver the process is gone.

Now the convertion to MDC can start after the HANA has been shutdown.

After that you have to add two new systems in HANA Studio.

To start the tenant you have to run the following sql command in an SQL session using the system database:

Once the tenant has started the processes look like this:

Now you can test the connection from the SAP instance:

As the connection is still working the indexserver must still listen on the same port ?

That means the connectivity of the SAP system doesn’t have to be changed.

In case additional tenants are created the SQL_PORT will be different:

and it also has its own indexserver process.

To get an overview about all tenants this query might be helpfull: 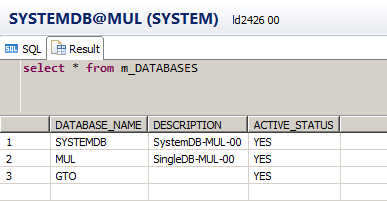 That’s it for now. 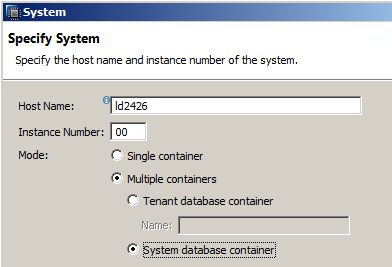 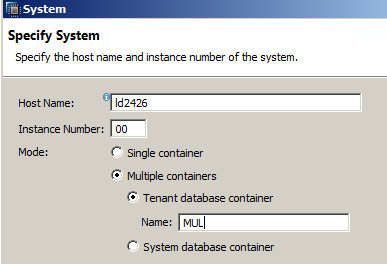