A series is defined as a sequence of data points made over a specific interval, most often a time interval. Examples of series are average levels of CO2 in the atmosphere, daily closing values of the stock market and daily precipitation levels.

Time series analysis is the practice of analyzing time series data in order to extract meaningful information. Just about every organization can benefit from harvesting this information in order to better understand reality: from financial applications striving to better support decision making, to heavy industry companies looking to better predict service needs, to retail organizations looking to improve by describing typical seasonality behavior.

Among the many new features with SPS09, SAP HANA introduced a number of powerful series analytic SQL functions. This article will introduce and explain these functions, as well as give general recommendations on their applicability.

As of SAP HANA SPS09, the CREATE TABLE statement has been enhanced to support a new SERIES clause. This clause indicates that the table will contain series data. A series table is like any other table but has additional properties. These allow for more efficient storage and takes particular advantage of the columnar nature of SAP HANA.

Getting the man in the middle – MEDIAN

The median value is very well known and does not need much further explanation. In SAP HANA, null values are eliminated when calculating the median value and the middle value (the average of the two middle values in the case the number of elements is even) is returned.

A negative correlation indicates that as one of the variables increases, the other one decreases. An example of this would be the correlation between vaccinations and illness: as more people are vaccinated for a given illness, the less this illness will occur.

Similarly, a positive correlation means that an increase in one variable will also increase the other variable. As an example, consider the relationship between smoking and lung disease.

No correlation means that an increase of one variable will not reliably affect the other variable, and that the elements are really just randomly distributed.

Sometimes, two variable are obviously correlated – just not as a line in a graph. 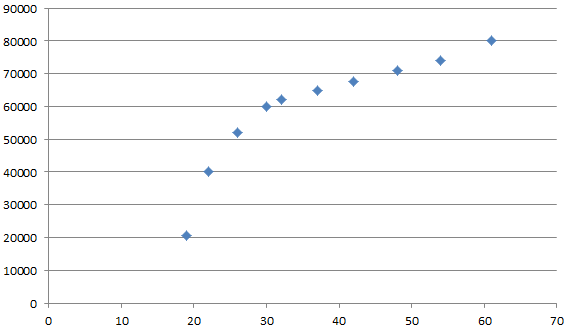 This is measured by the Spearman’s Rho correlation, which is supported in SAP HANA by the CORR_SPEARMAN function. Considering the graph above, the CORR value is 0.88, indicating a strong corrrelation, but not perfect (a line would not be a perfect fit). The CORR_SPEARMAN value, however, is a perfect 1 since each consecutive value ranks the same on both the x and the y axis.

This is a measure based on the sample size and must be calculated in order to draw a meaningful conclusion.

SPS09 is the first release of SAP HANA to support SQL-level analytical series functions. Over time, we can expect more support for additional functionality, such as direct support for significance calculations and other measures such as Kendall’s Tau correlation – a different correlation measure which is more sensitive to many, but smaller, rank differences. Kendall’s Tau is a better measure when we are looking to measure overall conformance but are not too concerned about one or two major discrepancies. By contrast, Spearman’s Rho is very sensitive to singular, large variations.

Full support for series analytics can be found in the R language, which is also supported by SAP HANA. To take advantage of the full, blazing speed of in-memory analytics, however, we need to use the native SQL functions described in this article.

As the SAP HANA platform continues to evolve, I will update this blog with information about new capabilities for lightning fast series analytics!