I was blogged forward by Conall O’Malley.We both work in CRM Product Support. I was already a grizzled veteran of SAP, my career in the company spanning several geological periods, when young O’Malley joined as an innocent, bright-eyed youth; so far he’s stoutly resisted my attempts to corrupt and embitter him..

My name is Brian Patterson and I hail from Newry, a town of 30,000 people nestled in a basin in Co Down, on the north-east of Ireland, which recently acquired the status of city (much to the amuse- and bemusement of its inhabitants).

Although not a common tourist destination, Co Down boasts some beautiful scenery and has been immortalised in the song The Mountains Of Mourne, from which the following photos are taken (the mountains that is – not the song. I have no photos of the song). 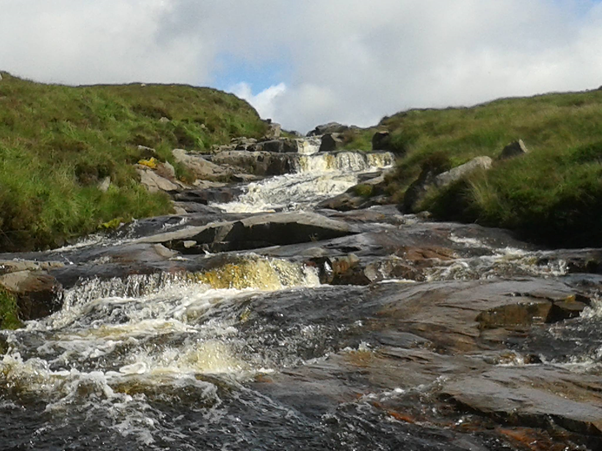 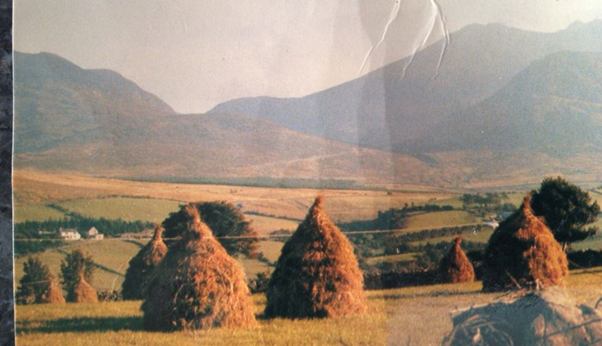 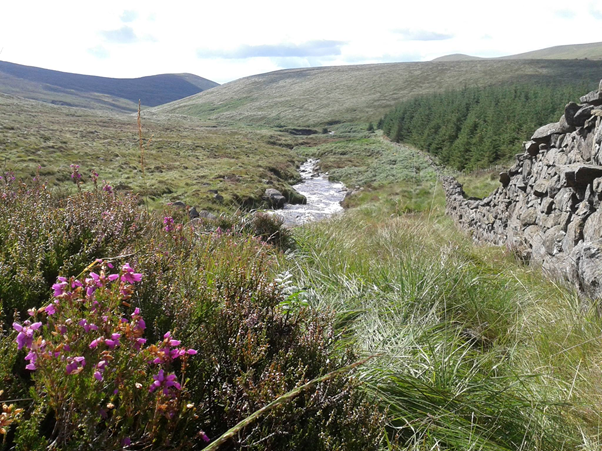 I used to say that everyone should spend some time living in Newry, if only to experience the great joy of escaping the place – but I’ve grown fonder of it in my old age. It’s quieter than Dublin but people are friendlier. To “Free State” (Republic Of Ireland) residents it will always be associated with cheap shopping, I guess.

Ireland is of course famous for its literature and music, two great passions of mine. For several decades anyone unfortunate enough to share accommodation with me had their ears incessantly assailed with my fiddle playing, and I often performed at Irish music sessions in pubs until finger problems put an end to my fiddling. (Note: A fiddle and a violin are the same instrument; don’t let anyone tell you otherwise.) There is little in the way of photographic evidence of my pub playing days, though the following snap somehow survived. I was something of a hippy in those days, as evinced by the next photo, taken when I was young and foolish (as opposed to the old-and-foolish contemporary me). 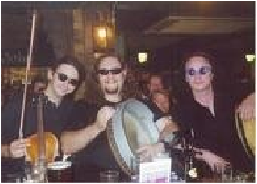 Ireland’s answer to the Blues brothers 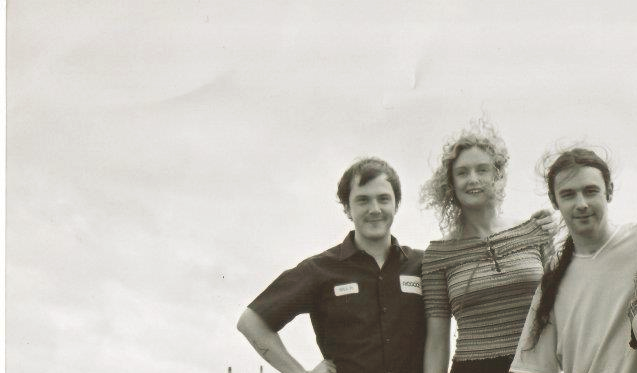 On the surface, Irish music sounds deceptively simple, the tunes conforming to a small number of very bouncy rhythms and simple scales, plus slow airs played in free time; delve a little deeper, however, and you’ll discover some of the most complex ornamentation to be found in any music. It’s also singularly suited to getting drunk, which will come as no surprise to observers of Irish society.

Very recently I decided to purchase a tabla, which is an Indian hand drum. This is what mine looks like: 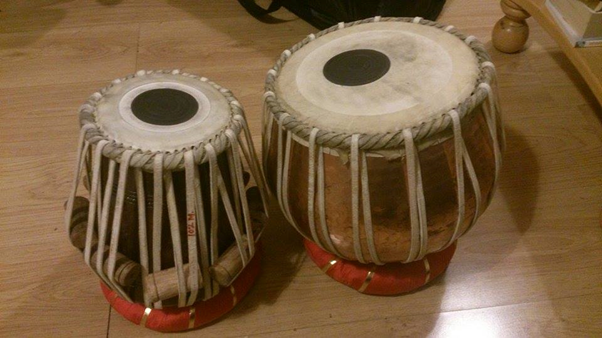 Indian classical music, in addition to being extraordinarily soulful, is largely improvisational; a competent practitioner must be comfortable in playing 108 functional rhythms and 72 parent scales, and that’s just the basics. It also involves “micro-tones”, tiny changes in pitch that are too subtle to be notated. I expect to spend the coming years a state of perpetual bewilderment as I attempt to unravel the secrets of this music.

Moving swiftly along to the second of my passions listed above, it’s worth noting that Ireland produced four Nobel Literature laureates in the twentieth century, which is quite an achievement for an island with a population of around 5 million; this feat is all the more remarkable given that perhaps the most revered all Irish writers, James Joyce, who practically redefined the novel, is not part of that group.

My personal favourite among Ireland’s writers is Flann O’Brien, who authored two of the most hilarious and imaginative novels ever written. The Third Policeman is a comic masterpiece, at once dark and hilarious, macabre and surreal. It features a highly cogent argument demonstrating how the atomic theory is turning people into bicycles, along with a fictional philosopher-physicist ‘de Selby’, whose completely absurd theories sound almost plausible in the framework of the novel’s demonic logic. De Selby, noting that light takes a portion of time, however small, to reach its target, came upon the idea that if a network of mirrors were aligned properly a viewer could actually see into the past through a series of repeated reflections.

His other masterpiece, At Swim-Two-Birds is even more creative and may well be the most quintessentially Irish novel ever written. The Latin American literary giant Jorge Luis Borges described it as follows:

“I have enumerated many verbal labyrinths, but none so complex as the recent book by Flann O’Brien, At Swim-Two-Birds. A student in Dublin writes a novel about the proprietor of a Dublin public house, who writes a novel about the habitues of his pub (among them, the student), who in their turn write novels in which proprietor and student figure along with other writers about other novelists. The book consists of the extremely diverse manuscripts of these real or imagined persons, copiously annotated by the student. At Swim-Two-Birds is not only a labyrinth; it is a discussion of the many ways to conceive of the Irish novel and a repertory of exercises in prose and verse which illustrate or parody all the styles of Ireland.”

However, I suspect the author may have been even more pleased by Dylan Thomas’s recommendation:  “This is just the book to give your sister – if she’s a loud, dirty, boozy girl”. So check it out!

1.If you were back in school again, what would you choose to study?h5>

I guess reaching enlightenment is out of the question, so I’ll settle for contentment and a good life with my wife (boring, I know).

3.If you could invite 3 people (dead/alive) to dinner, who would it be and why?

Flann O’Brien (for his acerbic wit), Noam Chomsky (to tap his brain, and to have someone less acerbic who can match O’Brien’s linguistic brilliance) and John Coltrane (for being John Coltrane).

The evil publish button strikes again! (or maybe there simply isn't anything else to tell ;-D)

EDIT: Woah. 20 Minutes ago, there was just a small bit of unformatted Text with an introduction. That was quick! 😀

Hmm, those pictures look mighty familiar though. And the first one is a strange looking drum. 😀

My idiocy knows no bounds 😛 . All corrected now, though,

Don't worry, nobody can best the publish button.

Cool thing with the Tabla by the way, I haven't played that kind of drum yet. Looks similar to a Jembe (from the construction) without that "long part" of the barrel.

Yours is an epic, falling in folds. Reading your story takes my imagination to wild places, maybe to India or just here in Newry 🙂

This was one of the best read.

Brian, your love of literature, and perhaps of the absurd, shines through in your BIF, with your own absurdly literary style. Great BIF! Makes me want to travel the Irish countryside to Newry and read darkly comic masterpieces while listening to tabla drummers and fiddlers over a pint or three in pubs along the way.

I love your Tabla. You are rightly said, Indian music is soulful.

I know some bit of Flute (little intermediate level 🙂 ), it gives a peaceful feelings when you are on it.

When the eastern part of the world is moving for western music, a person from western country to love Indian music is really adorable. Kudos !!!! 🙂

Thanks for sharing lovely pictures of Ireland. I cannot praise enough the mother nature beauty. 🙂

Nice one! Thanks for sharing  🙂   Ah, and by reading all these thinks about music and beer and watching the photos of those beatiful landscapes... i just wish i could be there....  🙂

Thanks, Sascha. It's nice to see you're still alive. I hope you're well.

This is lovely Brian. I was thinking of you when visiting Rosaleen, my mother, in England last week. Hard to believe Eddie is over a year gone now. He often remembered you fondly.