Now there’s a huge coincidence.  On the day I bought an Audi, I am writing about a SAP HANA technology where Audi features in the data set as an example.  Whilst writing about Tahir Hussain Babar’s instructional video on ECC Replication in SPS09 for the SAP HANA Academy I am not going to discuss company brands but will touch on how coincidences affect our decision making. Think back to even important decisions such as the purchase of a car or the selection of a life partner.  Most of these decisions are not objective, quantifiable or even based on specific need.  Many of them, though we don’t admit it, are emotional decisions that boil down to timing. To paraphrase the Godfather, “the price you pay for the life you choose”, can boil down to a pair of eyes and a nice smile or a colour and fancy badge.  When I write these blogs I do so as an experienced teacher with management experience and father of teenage girls.  A middle income, middle aged graduate professional from a humble background but with a noble heritage, I am heavily influenced by where and how I was brought up.  I am partly the result of the selfish decisions most of us make, an honourable exception being Bob, aka Tahir Hussain Babar.  The connections I make between what strikes me as I review these videos is not always direct and clear from an IT commercial perspective.  When I write about videos on Geospatial Analysis I remember a time before SAT NAV.  I know that the two are only tenuously connected.  Why do I mention this?  It’s simple. We learn in text books that businesses exist for a variety of reasons but whilst remembering the primary reason – making a profit, forget what we are dealing with – people.  People make many of the most important decisions of their lives based on the information they have at the time.  This information is processed thorough a mind influenced by a whole set of experiences and perhaps genetic tendencies.  This video is about real-time processing.  Again tenuous but relevant, like the fluttering of a butterfly’s wings on the other side of the Atlantic, real-time processing affects customer behaviour.  People in receipt of real time information will make decisions differently.  This is why businesses invest in it.

This video is about replication.  In this session you connect to a remote system which is an ECC system in DB2. This task will then be replicated in real time into SAP HANA.  This is real-time transacting and will democratize and open up many closed business systems including the auction I bought my car. 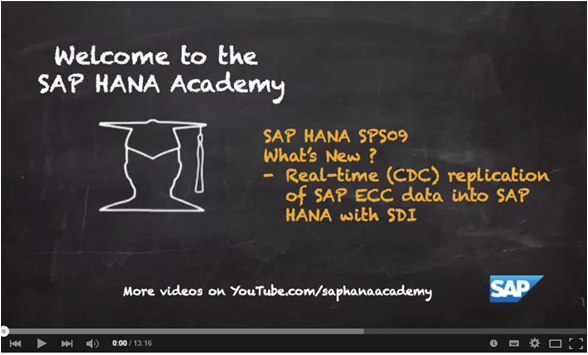 Bob starts off by demonstrating how to look at the source data.  He discusses how this is like a virtual view on top of ECC tables in DB2.  He outlines how he is going to do this by using SAP Logon to change attributes about a customer.  You should see the changes in the remote system in DB2.  After setting up replication you will see these changes in your own SAP HANA system.  Bob explains that you cannot actually view the data here.  This is a virtual table which is sitting on top of the DB2 system.  To get around this problem Bob demonstrates adding a virtual table into a schema. 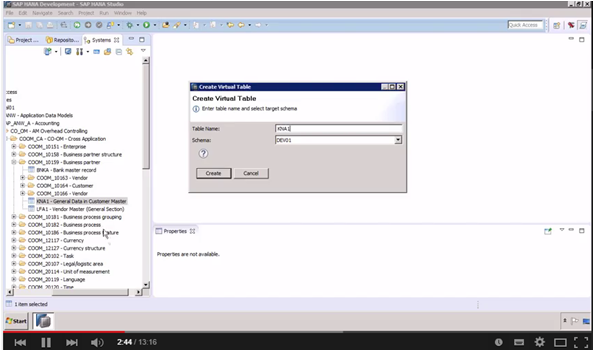 Bob shows how the table is replicated to his schema.  He explains how this isn’t really a table.  It’s a view that is pointing to that DB2 system.  He asks a rhetorical question.  How can this be proved? He opens the table content showing a list of customers going into his remote system. 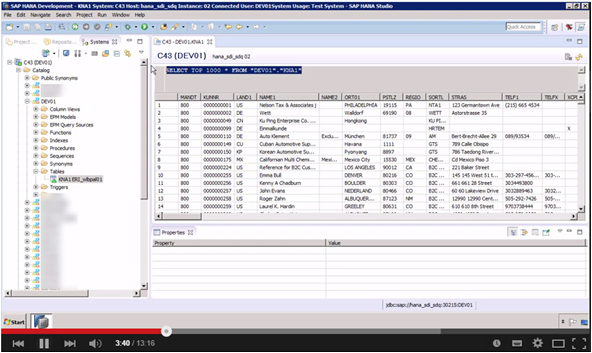 Bob then demonstrates updating a particular customer using the SQL where clause by customer number.  To allow for the connection he puts in six trailing zeroes.  He then demonstrates how to change one column in the record selection below. 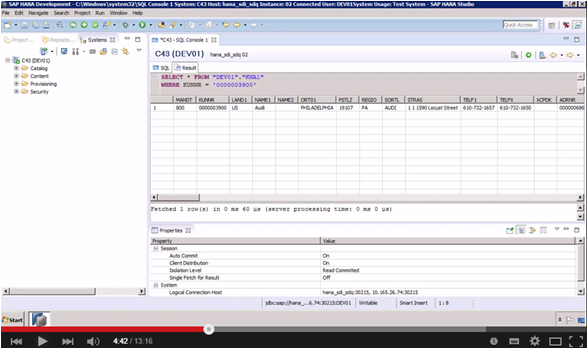 After logging on to the SAP GUI System Bob demonstrates how it is connected to the ECC system. He creates a transaction code which will modify the master customer data.  He verifies that he is logged into the right client and runs the command XD02 to modify the data he has selected for the purpose of the demonstration.  This updates the relevant value in the table above. 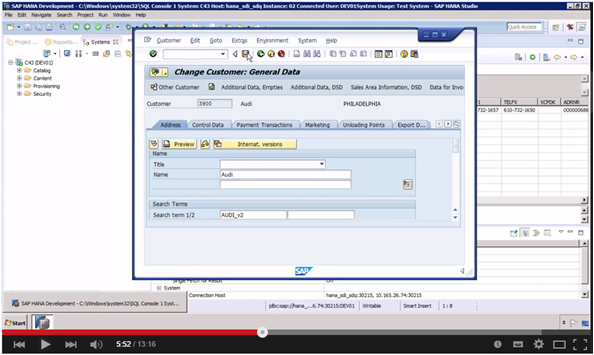 Bob emphasises that this isn’t replication.  This is a view using smart data access in SAP HANA which is connecting to that remote DB2 system running SAP ECC. 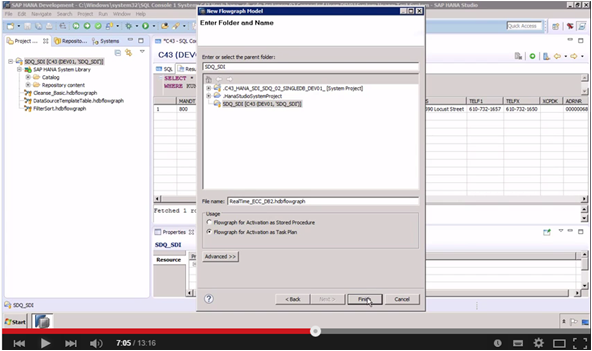 This is a real-time job so you need to set the base properties on the canvas especially the Real time Behaviour which needs setting to real time. 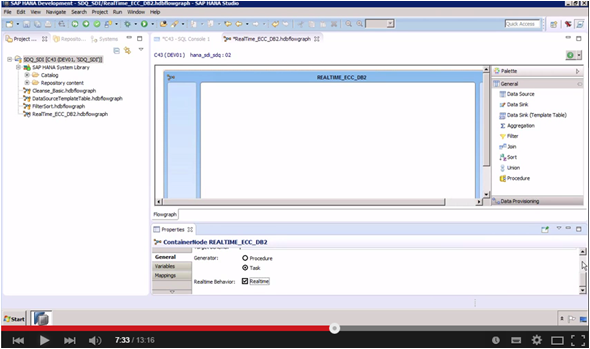 After creating a connection between his schema and a template table in HANA, Bob activates the connection to purposely demonstrate a common error.  This error occurs because you need to set both the base object and the data source with real-time behaviour. 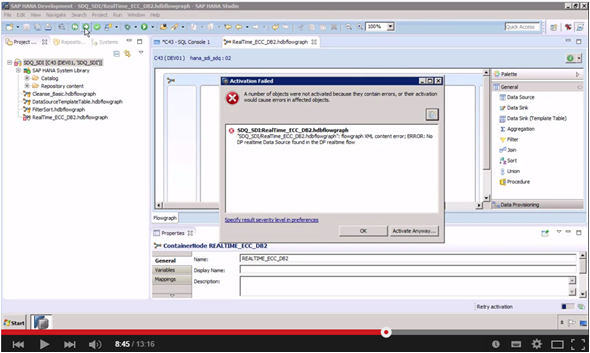 Bob then explains that in a production environment you would not want to keep re-executing this job.  The replication should be pushing the data changes.  Selecting real-time creates a procedure.  You can see it when you go into your Catalog as shown.  To test this you need to run it in a SQL console. 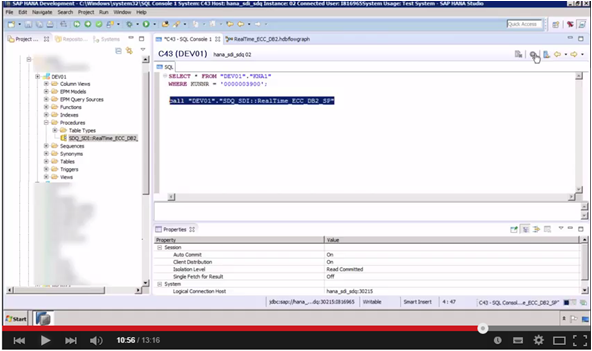 The data is being pushed so all you need to do is run it once with a call statement.  It’s not running every few seconds, the agent is taking care of the replication.  Bob then proves once again that the data is being replicated in real-time between the original and replicated tables. 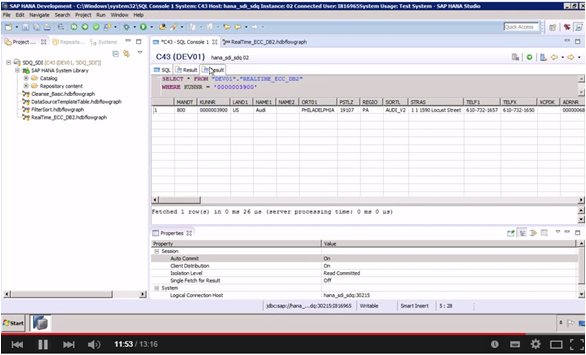 Real-time systems have been with us for some time and are strongly influencing our decision making.  My recent car adventures are a case in point.  My car sadly died a few weeks ago.  It was killed in an accident.  I was on my way to teach Ruby on Rails in one of the most deprived areas of Northern England at the time.  It had completed 185,000 miles on the original clutch, gear box and exhaust.  It was beginning to look battered and I had, like a man with a roving eye, flirted with the idea of getting another car.  “It’s costing us too much money” I would complain.  In reality the car owed us nothing.  I tried out other cars, but for the extra investment, found them lacking. The car soldiered on as its bodywork fell apart.  The engine for me, remained unchanged, it was in a way beautiful.  It had that winning combination of speed and economy which so easily wins you over.

I have never been a car person and spent many hours cycling to work, as is recounted in one of my first SAP blogs.  It was at this time that I bought my first brand new car.  At the time my wife was struggling to motivate my 3 daughters to walk to school.  Usage of public transport

in England can be problematic when out of the major cities. My wife was having unpleasant encounters with awkward bus drivers in particular.  I presented my decision to buy a new car to her to as a rational one. We would buy a diesel car from a country renowned for unimaginative reliability that would fit our three girls in the back without squabbling.  In reality emotion was involved. I wanted my wife to whisk about her business in the small town where we lived, in comfort, while I loved the thrill and sense of mission of my daily biking adventure to work.  I wanted my filial possessions enviously protected while I risked the elements.  This dynamic changed as we all got older.  My teenagers met friends on the bus, my wife prefers to read rather than negotiate traffic on the way to work and a promotion brought me to my doorstep. I don’t need a car for half the week these days.

So why did I buy an Audi?  After keeping the same car for so long I wanted to try new ways of doing things. I was not going to buy a new car from a garage or keep a car for years – a few months at most.  I decided to try my negotiating skills emboldened by the marketing information supplied so copiously by the Internet.  Car traders have a terrible reputation in England but the “private market” is riddled with unlicensed traders.  I turned to where many brave car hunters fear to tread.  I decided to go where the car buying predators (traders) go.  I decided to buy at an auction.  When you bid you are competing not just against other traders who can bid online but also time.  Cars get sold so fast it’s frightening.  This is real time in action.  I went into battle armed with a smart phone and a crew.  You cannot walk in this jungle without a companion.  I had three friends I could trust who accompanied me at various times.  One of them had a best friend who was a trader himself.  I also met another trader whose uncanny ability to spot price a car was truly impressive.  My trader friend was able to glance at a car and hear its engine and make a buy or not buy decision in seconds.  My trader friend was armed with a keen instinct for what others liked which included badges, colours, wheels, and surprisingly last: numbers such as engine performance.  He had four prices at his disposal for each car but only used two of them.  The BAV (Below Average) and AV (Average) prices were obtained by up to the day recording of real car price sales.  Always buy a desirable car between these two prices.  You can’t go wrong.  What is a desirable car?  Well it’s nothing to do with expert reviews or car performance.  People don’t pick cars logically according to their needs they pick according to their feelings.  Real-time data processing will make these purchasing feelings more accessible to computers.

To save time yesterday I had selected six cars.  I had decided to only go up to 75% of my budget.  The first four were rejected by my trader friend as being mechanically unsound or suspicious.  At one point he said “Look I know you want to return your hire car and get back to work but don’t be disappointed if you don’t buy today.”  It was at this point it crystallised for me.  I wanted a car that was a bargain.  I wanted to be able to resell it later for a modest profit and then buy another.  I wanted a car I would be happy to keep for some time, in the event it did not sell. I had to throw away my preconceptions and think of what was desirable to others.  I asked my friend.  He said “If this car checks out, it’s the one”.  We agreed a limit and I asked him how much it would make on resale immediately and after Xmas.  If my price held I should make between a sixth and a third of my budget as profit. I was nervous as the bidding started and prepared to go back to my hire car and tell my friends of another fruitless journey.  This decision was informed by a large number of opinions, amateur, expert and professional.  These opinions are increasingly shaped by the impressions that big numbers make and their increasing availability.  My nonchalance paid off and I won the bid just, within 75% of my budget.  I now have a car I am happy to drive around in and can sell at a profit.