This blog is part of the larger series on all new developer features in SAP HANA SPS 09:http://scn.sap.com/community/developer-center/hana/blog/2014/12/02/sap-hana-sps-09-new-developer-features

Additional blogs on this topic:

In SPS 09, SAP introduces a major extension to the programming model in the form of a reusable XSJS Library called XSDS or XS Data Services. There are several goals for this new library and the impact that it has on the overall programming model.

The origin of this extension to the programming model is that there were originally three separate projects/libraries built within SAP.  They focused on different aspects of data consumption within XSJS. They were an ORM (Object Relationship Mapper) library, a Query Builder, and a Relationship library.

While these three individual libraries all had value on their own; ultimately SAP decided to integrate them together into one single library and also build them onto the CDS/HDBDD foundation for even better reuse of information that already exists within the database layer.

Core Data Services are a cross-platform set of concepts and tools to define semantically rich data models.  Within SAP HANA we already have the development artifact HDBDD for using the CDS syntax to define tables (entities), their relationships and views that utilize those relationships. A central part of the CDS specification is the object-relationship mapping that links semantically meaningful entities to their technical representation as records in the HANA database.

The short description of XSDS then can be consider as the native CDS embedding for JavaScript in the XS application services layer of the SAP HANA Programming Model.

At its core, XSDS allows you to import and extend CDS entity definitions.  You simply supply the package path and file name of the HDBDD and the entity name during the import. The XSDS library reads the available metadata on types, keys and associations.  It also supports extensions, projections, and renaming of entity definitions.  It also supports CDS conceptions (like backlink and via entity associations) which aren’t yet supported by HDBDD definitions.

In this simple example we import the Employees entity from the EPM hdbdd artifact and the MasterData Context.

oEmployee is a now a JavaScript which contains all this metadata which was already defined in the underlying CDS model. It also supports full CRUD transactionality via this JavaScript object.

However, this import of the metadata from the underlying model can be a relatively costly operation. Because the XSJS programming model is stateless this often creates the situation where you must re-import the CDS metadata for every single request.

For this reason the XSDS library also support pregeneration of imports in order to improve performance.  The library serializes the result of the import into a single reusable XSJSLIB file. Therefore instead of importing the entity from the HDBDD artifact you can use standard $.import feature of XSJS to utilize this prebuilt library definition.

However XSDS isn’t limited to only using CDS Entities. The goal for XSDS was to provide a single solution for all XSJS applications.  This means being able to use the same access library even if your base tables are directly created in the catalog and not via CDS. This way you can decide between Managed or Unmanaged modes in the library.

Unmanaged mode, on the other hand, functions as a Query Builder to provide you with maximum flexibility and access to nearly the full HANA SQL Syntax but via a simplified query interface. Data consistency between entities, however, remains the responsibility of the application developer.

Now for more details, lets look at some syntax examples of both Managed and Unmanaged Mode.

Earlier we saw how to import a CDS entity definition.  You can also import catalog object definitions as well:

In this case we supply the Schema and Table name from the catalog instead of the path to the HDBDD artifact.

Regardless of the source of the entity, we perform the same core operations on the entity after its imported into a JavaScript object.

We can create, retieve, update, and delete instances of the entity.

You can write changes into the database explicitly.

The transaction manager tracks local changes for minimal updates to the database.

As far as instance manipulation goes we can retrieve a single instance by key:

Or you can create a new instance using this syntax:

The benefits of this approach are that the runtime guarantees consistency.  You have a single consistent view on every instance enforced by the $save operation. You also have automatic association management across all relationship cardinalities (1:1, 1:n, and m:n).

The downside, on the other hand, is that we need additional overhead for instance management.  We are also limited to a subset of database functionality for instance retrieval. 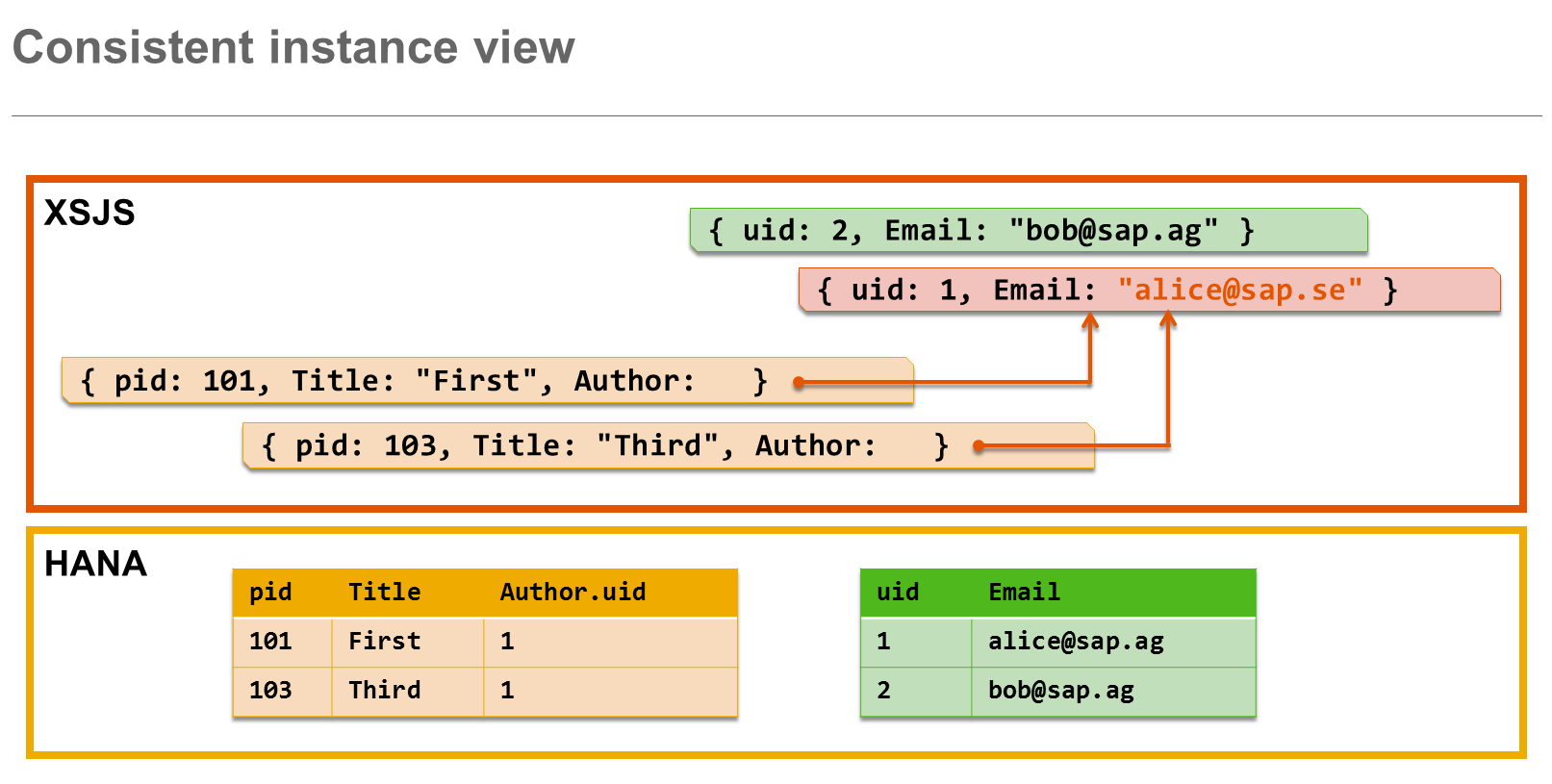 We also have unmanaged mode for when you want a more convenient database interface but don’t want to give up the full database syntax.  For example here is the typical database join statement in XSJS code.

There are several problems here which XSDS unmanaged mode addresses.

For these reasons the XSDS library also supports a query library for Ad-hoc queries.  It allows you to construct general queries in a very JavaScript-like way:

The result object still yields a plain JavaScript object as unmanaged values not an instance as of a managed object.

Here are some additional code examples to help you learn some of these benefits.

The results of this query would look something like this:

The library supports complex where conditions like the following:

There are predefined operators of the expression language:

But you can still escape to any SQL operator:

$matching allows selection using a template for the result.

**Note the Unmanaged version of $find and $findAll uses the same template language.

Thanks for the blog Thomas . This resembles RDL .

Wow. Just tried it and it works very nice. This is going to be a great helpful library.

Can you share your code please.
I tried several times and didn't get result

You tried what several times?  Might I suggest if you are having problems using the XSDS libraries that you post a question with details in the SAP HANA Developer Center forums.

I had some problem with my instance and I fix it.

When you say " It also supports extensions" does it mean that it adds more properties to the actual Entity?

You mention that we can enhance an entity

Please find below the code of my test.xsjs file

here I have added the field testname, the xsjs executes sucessfully but there is no change in my entity.

that also reflects no change in the post entity .

Can you please help in this issue.

Are you expecting that the underlying database tables would change in a permanent way? If so you misunderstand how this works.  These extensions are to the runtime object temporary and don't persist back into the entity definition (database table or view).

I keep on getting error 503 "service not available" for my simple xsjs code:

Your question isn't related to the topic of this blog. Therefore it would be better suited to its own forum posting.  If you think you are timing out, then when happens when you run the same query from the SQL Console?  Or are you retrieving a very large result set? There doesn't seem to be any where condition on your query.

Can we import the CDS views created in ABAP perspective using XSDS ? or it is only HANA CDS Views.

No you can not reuse CDS Metadata from ABAP CDS in XSDS. It only reads the HANA CDS metadata.  You could define the entities directly in XSDS like you would any other catalog object.

does XSDS will also work for XSA?

We do have a new implementation of XSDS directly in node.js. Its the module sap-cds. It is the successor of the XSDS library and contains most major features already present in the older library. This module can also be used within XSJS Compatibility Layer as a replacement for the XSDS xsjslib.

There are additional XSJS Compatibility examples in the embedded documentation within with the module itself.

I'm really glad you posted this question. I hadn't even considered the XSDS usage in the conversion process.  Its a very good point and I'll now add an example to my TechEd content for this. I've actually been trying to go through the common XSA questions here on SCN and use them as the basis of the content for TechEd.

If you want to have a look at what we are building for TechEd, its available in GitHub: GitHub - I809764/dev703: SAP TechEd 2016: Code Review; Migrating Applications to HDI/XSA  With any luck, I'll be able to commit an XSDS example by the end of my day.

that are fantastic news for us.

I really really love your XSDS feature and was wondering while nobody was talking about it. (And I thought I saw all sap-moduls, but didn't see the cds-one before. )

But now I really glad to hear that you didn't give up this feature.

And of course we would really appreciate it, if you could show us only a small sample.

I saw this in the xsa developer documentation and it sounds to me, that the development for this modul is finished. Is there an other NoSQL sap-modul in work or how should I understand this note?

“Note: The sap-cds library is now considered feature complete. It will remain fully supported but will not receive any further enhancements in future releases.”

Thanks for your advice!

I think the description that its finished is accurate.  It will remain supported but we aren't going to invest in it further.

Thanks, this helps me a lot by my decision for the future.

In general I tried to use it once, but wasn’t able to get it to work.  In addition I found to less samples for sap-cds, so I decided to use “normal” sql-queries. But its sad, because I used to work with it in the past (mongodb) and I loved it, because the select was much more easier to understand. At least for me!