Using the values applied in a Input control among reports

Would like to share a method for using the values applied to na Input Control in a Report (let´s say Report1) in another Report (Report2).

This is not entirely my idea, I try to improve the discussion in here

and in Dave’s blg

Let´s construct our report based on a query over e-fashion like this : 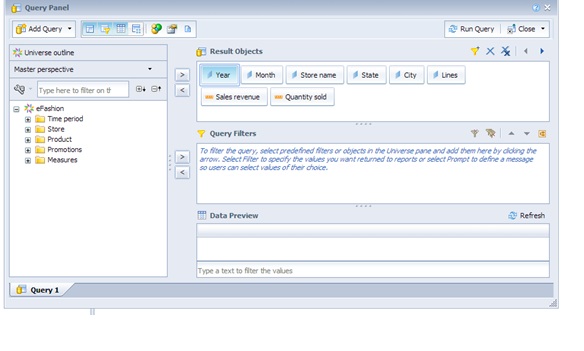 I will assemble Report1 as a cross-table containig [Line], [Year] and [Sales revenue] . 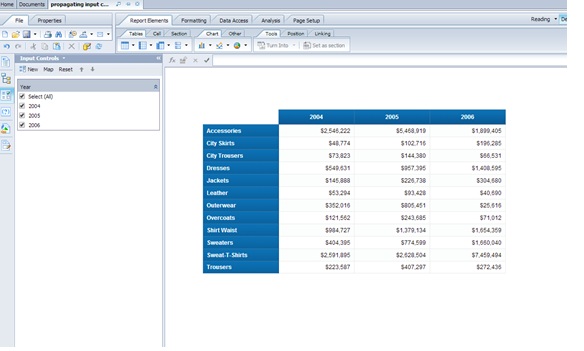 And this is Report2 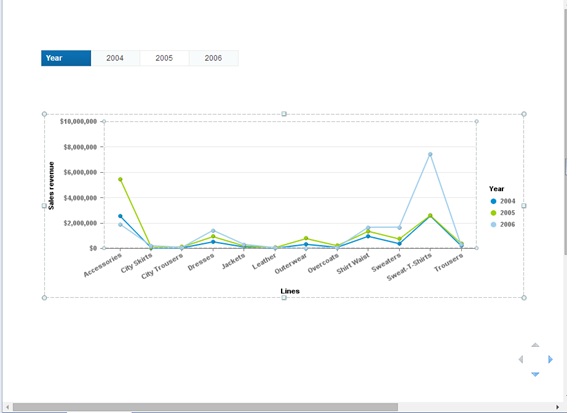 The whole idea is, when I alter the input control in Report1, Report2. Should be filtered by the same values.

To do so  lets first take a look at ReportFunctionSummary(). This function returns a string containing all filters applies on each report in a Document, so in our report, this is how ReportFilterSummary() will appear when I set the years 2004 and 2005 in the Input Control.

What we need to do is thentext between the brackets, which is the list of the values used by the Input Control.

I will use the following formula to separate the string list of values . Create a measure variable [list_of_values]

The blue part is where I test for [Year] being in the string list. In the red part of the formula, I test for the existence of the [Year] filter. If there is no [Year] in ReportFilterSummary() it means that an All selection was made in the input control.

There are somethings that one have to keep in mind while implementing this solution :

1 – As the search for [Year] filter ([list_of_values] variable), it is dependent on the language used. So, if you have an environment where you can have more than language selected, you must pay attention to that;

2 – This approach works , not only for the In List operator, but altering the variable you cant test for the other operators;

3 – Up to BOXI 3.1 SP3 this approach didn’t work because the Report had to be refreshed in order to it work. Apparently, in BOXI 4.1 SP3, this restriction was taken away

3 – Up to BOXI 3.1 SP3 this approach didn’t work because the Report had to be refreshed in order to it work. Apparently, in BOXI 4.1 SP3, this restriction was taken away

This mechanism also works in at least XI3.1SP5 and higher, can't comment on 4.x.

hi Neil, thanks for your feedback.

THis sample was done with 4.1 SP3. I would love to share it but, apparently, i could not upload a wid

No worries, I actually did a lot of testing on this in SP3 and could never make it work (I participated a lot in the first thread you reference); however, upon upgrading to SP5 I was able to get the mechanism working quite succesfully. I think it's worth noting as even though this thread is titled towards WEBI 4.x, many of the tips are backwards compatible,and some of us - sadly - are stuck on 3.x 🙁

What is +14 in the formula is for? Why is it hardcoded?

I think it is because the prompt text & starting accolade "Year In List {" is 14 characters long, so the values that you want to read out start from the 15th position.

I have Bo4.2 SP8 FP8 but still after applying the above method, report need to be refreshed to get the changes in input control on first tab to other tabs. Could you please suggest?