this week we launched a new version of the ABAP development tools for eclipse. You can install the version 2.36 from our common update site SAP Development Tools for Eclipse. With this version we now officially support the SAP GUI version 7.40.

Besides a bunch of bug fixes we also have integrated some nice little Santa Claus presents for you as an ABAP developer:

Looks like yet another setting in the long list of preferences of ABAP in Eclipse but it is a nice one. You may know this situation when running an application like a simple report from eclipse. Everytime you press F8 in the report editor a new SAP GUI window comes up to display the result of the report. With the new setting “Reuse SAP GUI window when running applications” you can change the behavior in a way that the already open SAP GUI view is reused:

This setting is very nice when having the editor and the SAP GUI view in parallel opened in your eclipse environment. Just change your code, activate, press F8 and you will see immediately the result in the SAP GUI view: 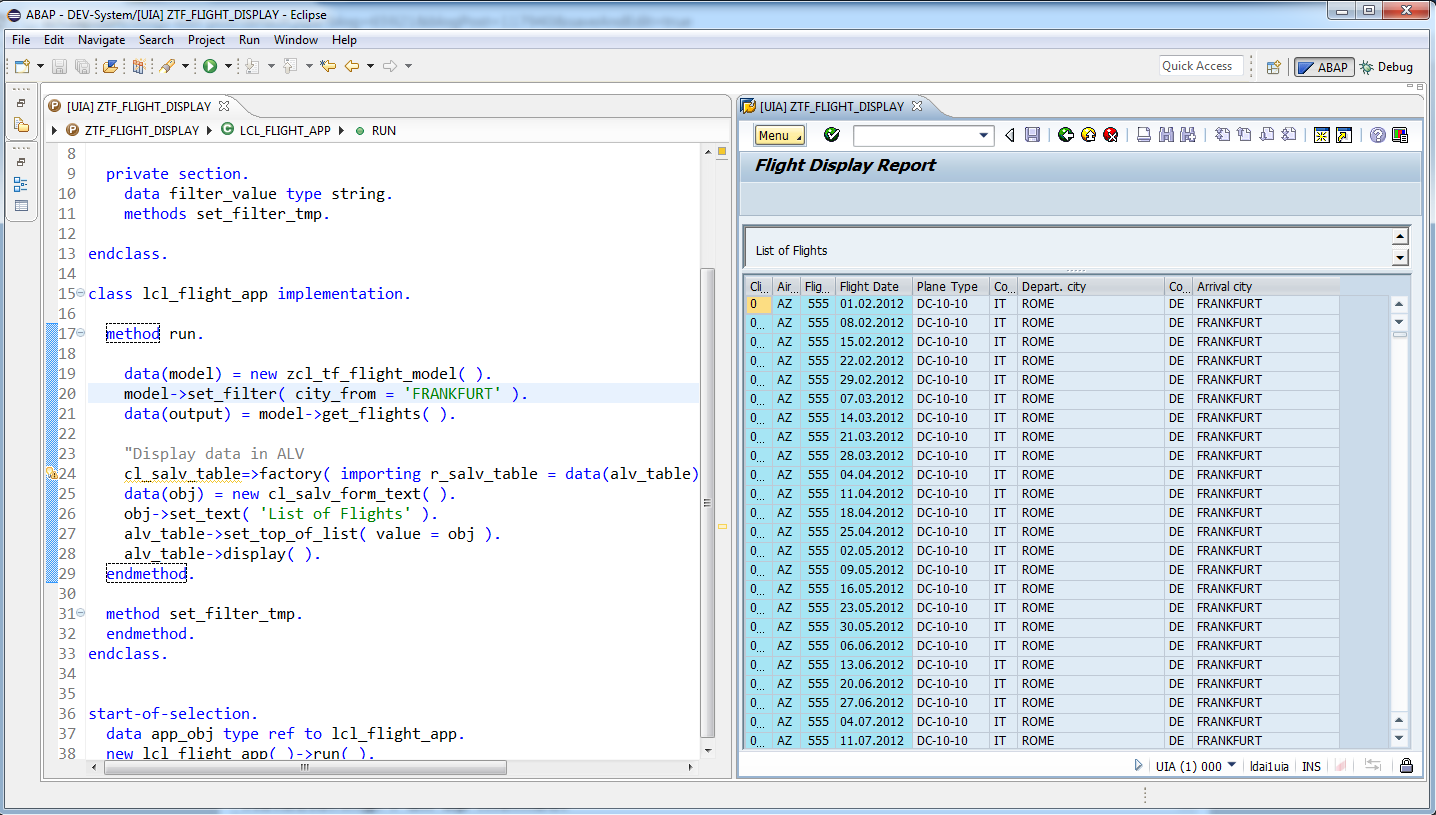 This refactoring feature was heavily demanded by our customers. When working in an object oriented way this feature is a must-have. It is now possible to move members of your class to the superclass or to interfaces that are implemented in the class. All the necessary tasks that you have to do manually in order to manage this refactoring are now being done by the editor. And guess what, it is integrated in the good old friend Quick Assist (CTRL-1).

Here you see a typical situation in your daily business. A class with several methods that you want to refactor in order to extract an interface out of the class: 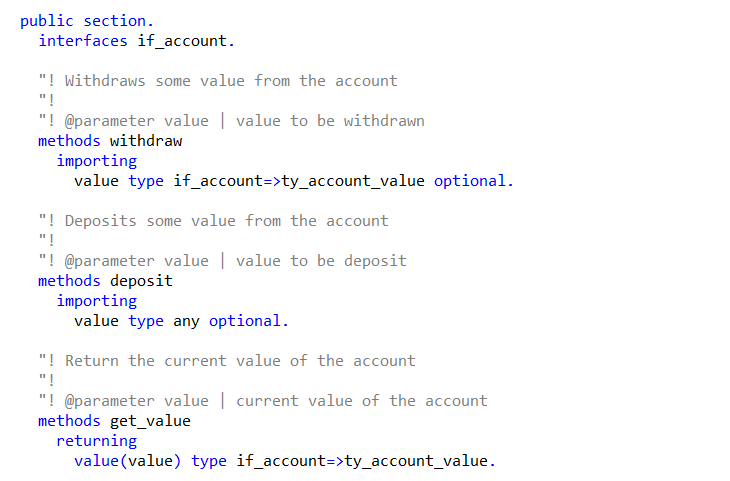 So your task is now: Copy all the method definitions to the interface, rename all method implementations of the class and create aliases for the moved members to not break already existing callers of the methods. With Eclipse these tasks can be done now via the Quick Assist. So just position the cursor on the member that you want to move and press CTRL-1: 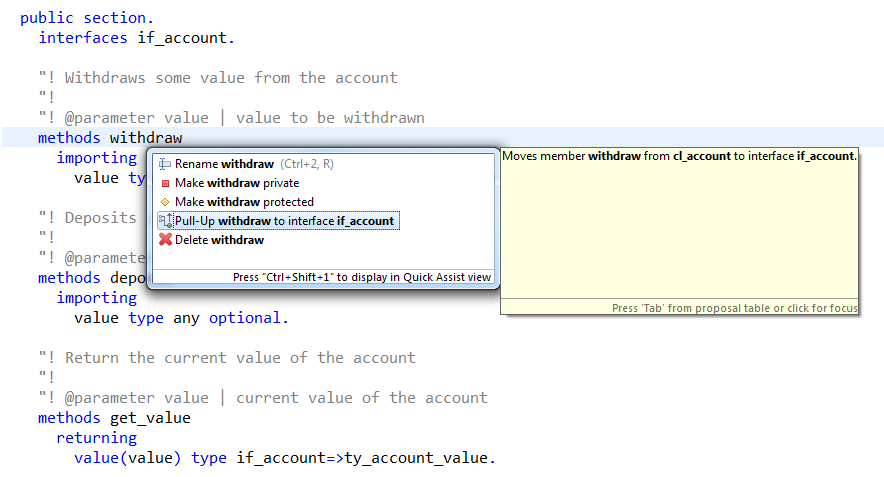 Now choose the option ‘Pull-Up ….’ in the menu to trigger the refactoring. The editor is now doing the necessary steps for you and the class will look like this at the end:

There are several optimizations on-going in our lab in this area like for example moving several members in one step or the extracting of complete interfaces in one step. And also the option to push down members to sub classes will be available with one of the next releases.

Remark: This feature is available since AS ABAP release 7.40 SP08.

Now another very small but interesting feature. Maybe you had this already. You are working in one ABAP project and develop an application in your development client. But for testing purpose you have to choose another client of the system as the test data is only available there. In ABAP in Eclipse you do this by creating a second ABAP project to the same system with different client setting. That’s an easy task but a little bit cumbersome as you have to enter a lot of stuff again in the creation wizard and you loose your favorite packages and others project specific settings. Therefore we now offer the possibility to duplicate an ABAP project via the eclipse project explorer: 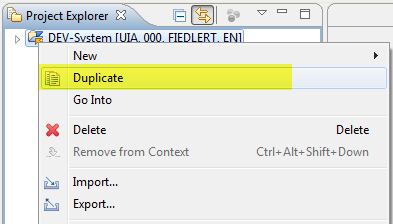 The creation wizard for ABAP projects is coming up and you can adapt settings like client number, username or logon language. System connection data, project settings and favorite packages are copied to the newly created projects.

It was often mentioned at Teched this year that it might be helpful to support developers a bit more when starting with the new syntax for dictionary views. It would be cool when the basic stuff of the view definition is already provided by the editor when creating a new source. With ADT version 2.36 we now offer templates in the DDL creation wizard for data dictionary views. We added a new page in the creation wizard where the developer can define which kind of view needs to be created. You will see the code of the template in the wizard with a small explanation of the template: 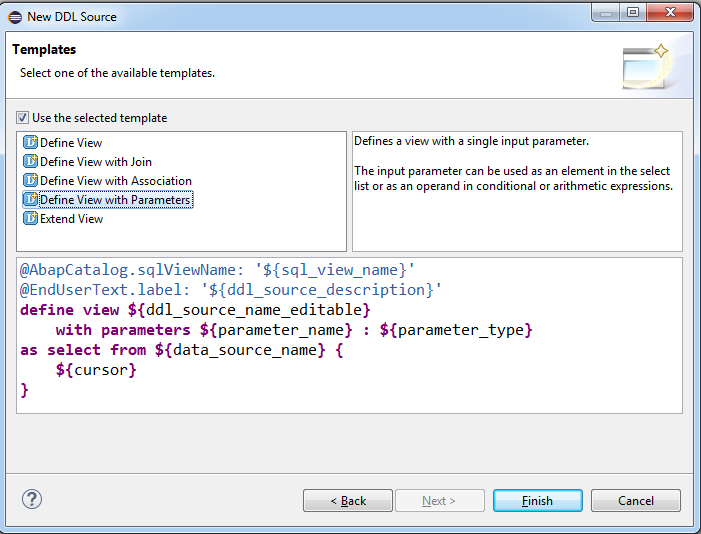 The editor generates the code in the source and opens the editor for you:

Hope this feature will help you to learn the new capabilities of the data dictionary views.

Hope you will enjoy these small little features.

Have fun and Kind Regards,

Thanks Thomas for sharing new information.

Thank you Thomas for the New Features of ABAP on Eclipse..

As always while reading through your posts I hope I really can get back to work fast to get my hands on the keyboard.

thank you for the ongoing improvement of ADT!

due to the potential inside the DDL-thing (AFAIK one can use dictionary-views even without HANA) I recommend to further invest in that area, so that everyone (don't forget the "grey haired ABAPers who are not so familiar with that geeky scripting stuff 😉 ) is capable of implementing without fuzz.

yes this is very important: CDS is running in all databases. It is the new language for defining Data Dictionary objects. And yes we are going for more productivity tools in that area. For example I have already seen a nice graphical representation in the editor for views and we are planning a wizard to define join conditions and fields lists. Last but not least we are also working on dictionary type support in AIE, so an editor for structures and data elements is already under development. All looks very promising to me what the guys are working on.

today i updated the Development Tools to 2.36.2. But after restart all my existing Projects give me the following message and they cannot be opened:

An Internal error occurred during: "Loading destination data for <Project>".

Local SAP UI landscape file not found; use SAP GUI to configure it

I checked my SAP GUI configuration (7.30), and all Systems are still there. But it seems, that Eclipse now does not find this configuration file any more.

Workaround is to configure all Systems manually in Eclipse. But i don't want to do that 😏 ...

the error message seems to indicate that you have installed SAP GUI 7.40 for Windows and that the new 7.40 configuration files are missing.

Could you give some details about the installation/upgrade history of your SAP GUI?

I also installed the latest tools today, and it was not possible to install it via the ZIP file from Service Market Place. So I used the URL - Luna - https://tools.hana.ondemand.com/luna to update here. I also have the SAP GUI 7.40 PL01 installed.

could you please use regedit.exe and check your registry for a key "LandscapeFormatEnabled"?

It could occur with value 0 or 1 somewhere under HKEY_CURRENT_USER or HKEY_LOCAL_MACHINE. It would be helpful if you provide the paths and values.

HKEY_CURRENT_USER\Software\Classes\ ... (Rest is the same as above),

and in 3 Locations under HKEY_USERS with a very cryptic path, i don't want to type here.

In all Locations with value 1.

the existence of LandscapeFormatEnabled keys in the registry usually means that SAP GUI 7.40 is installed.

And that's what AiE assumes, hence the error.

Could it be that you have installed 7.40 only for a short time, just to try it out?

No, but what i have installed is Netweaver BC 5.0, which is originally delivered with 7.40. Could this be the reason? And would it help to remove the entries or set them to 0?

I think the cleanest solution would be to install SAP GUI 7.40.

Is that an option for you?

No, would not be an Option, as it is streamed by Group IT, including the configuration files. And when i tried with my last PC, the update did not work with our configuration files... And as they are streamed every morning by the logon scripts, i see no Chance for 7.40 as to wait until i get it streamed...

Thanks for your help!

I am glad that you could solve the problem!

We have to figure out why the installation of NWBC 5.0 on SAP GUI 7.30 produces such a mess. Up to now I assumed that SAP GUI 7.40 is a hard prerequisite for NWBC 5.0?

Cannot wait to explore this new version. Thanks a lot for your sharing 🙂

it's my opinion you folks should really revisit what's CTRL+1 for.. at this moment, there are so many possible things for that shortcut that someone I have to CTRL+1 and navigate down using the arrows to select an action.. - why don't we have one shortcut for a task?

btw, what happened to generate getters and setters? - it's a lot of boilerplate to type, you guys should really implement this.. it's a pretty basic feature.

Thanks a lot for this stuff . cool 🙂

It is truely amazing what size of a smile that little checkmark for reuse was able to create on my face!

The idea is great and that made me smile yesterday. However, I have now tried it out on GUI 7.40 with ADT 2.39 and I too, like Hugo Armstron, get a new tab each time I invoke a report 🙁 . I can set the checkmark (and it is retained over a restart, so ADT should know of it).

The 'Reuse SAP GUI window when running applications' checkbox doesn't achieve anything for me. Running a program or debugging etc launches a new SAP GUI tab there every time and i have to manually close them off. It is a pretty annoying thing, any clues on why it might be working for others but not me?

which GUI version are you using?

which Eclipse Version are you using?

Ugh sorry for the late reply as i was unable to sign in where i am for some time...