Mastering customer engagement – Part 2 of 3: New technologies are driving consumers away from the utility

In the first part of this blog we discussed how utilities globally feel pressures that will redefine the century-based business model in the utility sector. Finally, consumers everywhere have exciting options in terms of energy supply. In this second part of the blog, we are taking a look what drives the change and how this may play out over time.I will summarize the main drivers. For the brave, I have added some more detailed discussion below.

Part 1: The global trend of shrinking revenues & margins, disrupting technologies with the consumer at the center

Part 2: Meet the competition that may better understand and serve the consumer

Part 3: “Innovate and partner” – What utilities and retailers can do and how enterprise software can help them win. 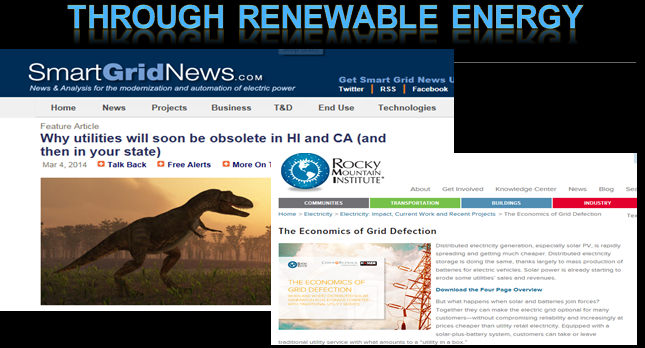 In the US, especially the proliferation of rooftop solar drives revenue loss for utilities. On a personal note, I installed a 5 kW system at my house in May 2014. I will be paying $2500 less to my utility this year since I am estimated to produce 6.5MWh myself. The cost of the system has become acceptable with a payback in ca. 6 years. As usual with technology, the solar panels and required equipment have become so much more affordable even without tax incentives. Nice, free market competition at work. Multiply these numbers by hundreds of thousands if not millions of customers in the US alone. You get the picture.

In the next 3-5 years we are expecting the holy grail of “solar in a box” (solar plus battery storage) to become viable for the markets.  Many consumers including myself will contemplate disconnecting from the utility grid for most of the time. 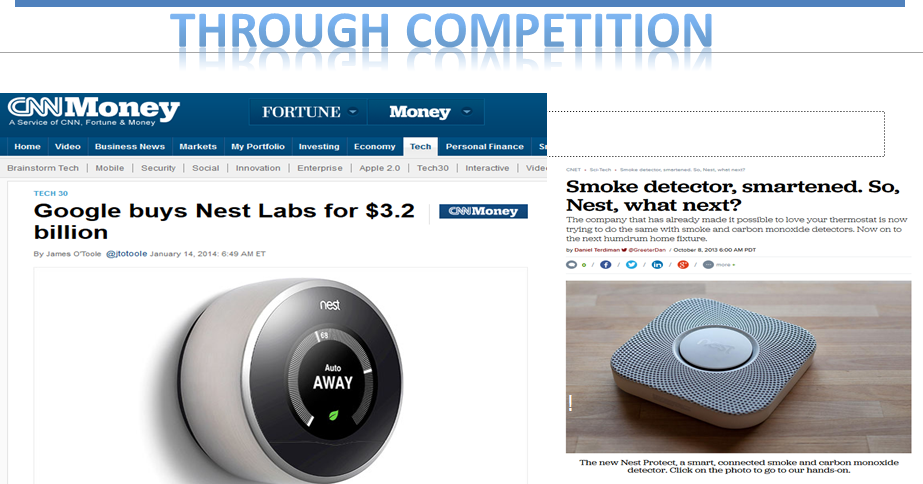 Companies like Google are betting big on redefining the energy markets from the viewpoint of the consumer. Their recent acquisition of thermostat maker NEST and home management company Revolv shows Google’s intention to enter the consumers’ homes with new products and services defined around the connected home. As energy is a major cost factor for every home, additional valuable product&services at the right price point are finding open ears with consumers. Google as an example might  eventually control energy usage by influencing temperature settings, allowing Google to enter a demand response market. Ok, the latter might be some years away due to unclear regulations and other concerns. Another use case for Google is the ability to monitor and analyze consumer behavior. How did Google reach its market dominance in the past again?

It becomes clear that utilities seeking to make up lost revenue from energy sales by for example offering demand response programs find that customers already may have signed up with the competition. I spoke to a demand response program manager at a mid-size municipal utility a few years ago. They tried to sign up mid-size commercial and institutional customers for their program trials. However, they often found that these customers already signed up with Enernoc, one of the demand response and energy efficiency power houses.

Electricity is the ultimate form of energy one might think. Like the internet replaced traditional radio, phone, or TV service over dedicated networks, electricity can replace other energy sources especially natural gas. It’s all about price and availability. 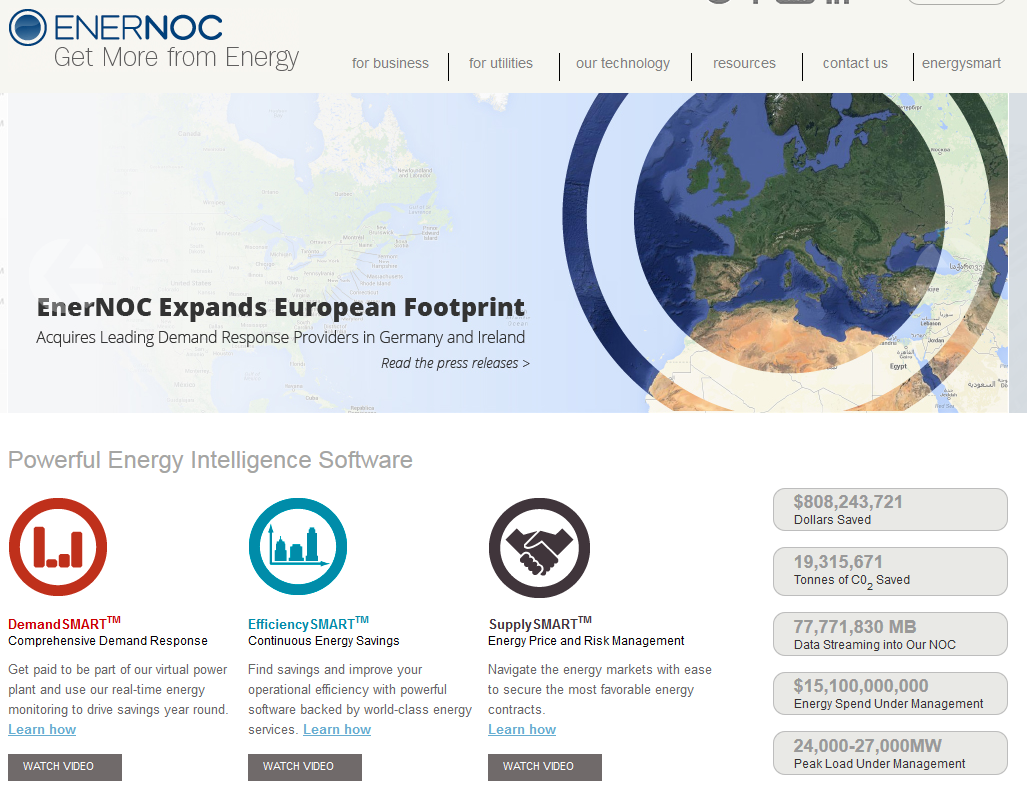 Enernoc’s home page clearly showing how much money utilities did not make from their customers.

Driver No.3
Are other companies, not utilities or energy retailers, better suited to serve consumers? 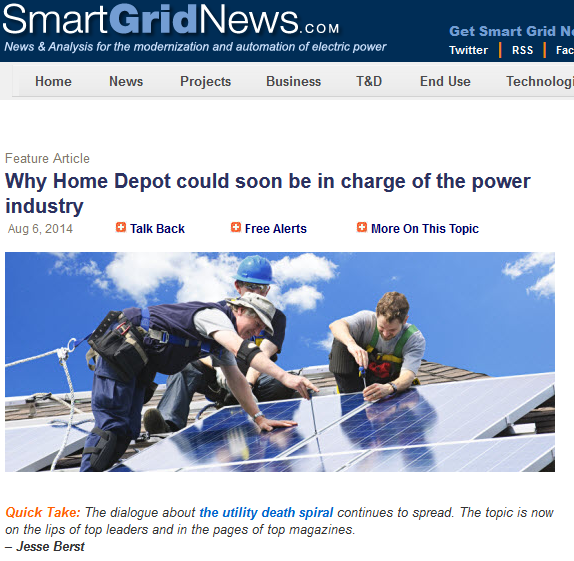 NRG Executive David Crane believes that power generation will be a very competitive business dominated by the private sector. NRG Energy is America’s largest solar developer and one of the country’s largest power producers. He accepts the threat that this competition might steal significant business from NRG.

It’s a fact that in the US home improvement stores like Lowe’s or Home Depot, retail companies like Costco, Walmart or electronics retailers like Best Buy are marketing, sales, and customer service power houses. They have an advantage in terms of brand recognition and loyalty that is light years ahead of utilities and energy retailers. For example. I visit a Costco warehouse store twice or three times a month! And how often do I contact my utility?

How would the traditional integrated utility or small energy retailer compete with these companies? I do not believe they will be able to. However, there is an opportunity indeed. Utilities and energy retailers who are positioning themselves as trusted advisor, have favorable views in the eye of their current customer base need to take advantage of the opening of the consumer energy marketplace.

And here for the brave: More details regarding Drivers 1-3 that foster the change of the business model towards consumers’ wants and needs:

Let’s look at some numbers. The 2014 Rocky Mountain Institute study THE ECONOMICS OF GRID DEFECTION” quantifies the effect of increased distributed generation. For example, they estimate when each of the  US states will reach a state called “grid parity”.

You can find the study here: http://www.rmi.org/electricity_grid_defection

To understand the study it is important to understand what grid parity means:
Definition: Grid parity occurs when an alternative energy source can generate electricity at a levelized cost (LCoE) that is less than or equal to the price of purchasing power from the electricity grid.

So, once grid parity is achieved customers can choose to bypass their utility without incurring higher cost or reduced reliability. 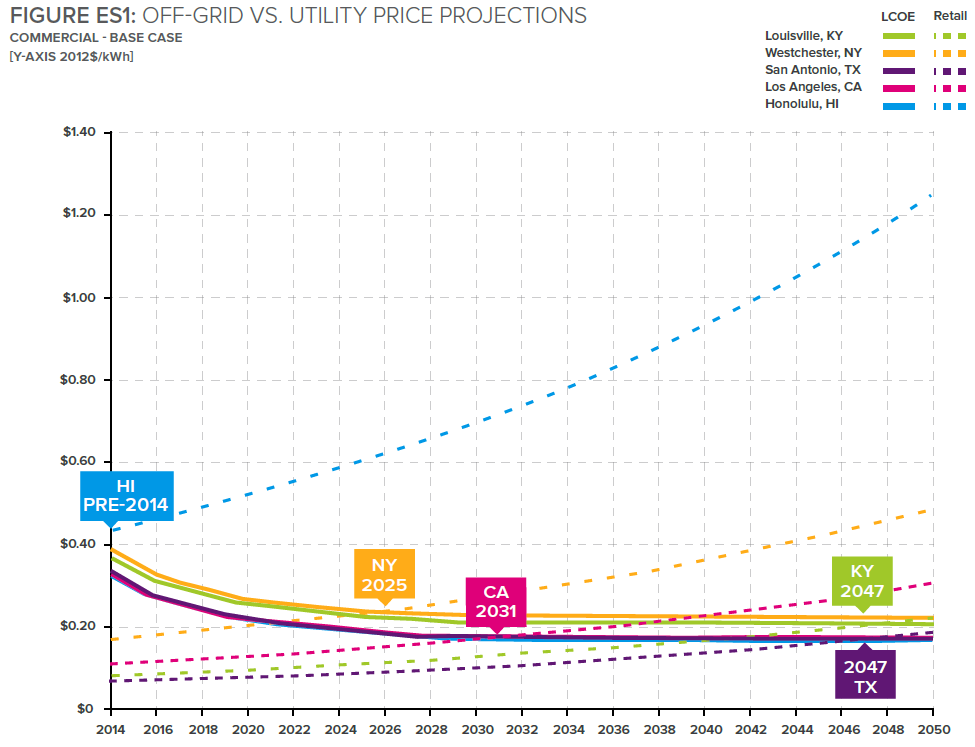 3) Because grid parity arrives within the 30-year economic life of typical utility power assets, it foretells the eventual demise of traditional utility business models. Grid parity just 10-20 years away even for states like NV, UT, AZ.

As you can see, grid parity was already achieved on Hawaii. Is looking to Hawaii looking to the future of the utility globally?
The local utility is currently in the process of redefining their business model. Just very recently they announced a plan to clear a large backlog of rooftop solar applications.
http://www.hawaiianelectric.com/heco/_hidden_Hidden/CorpComm/Hawaiian-Electric-announces-plans-for-approval-of-pending-solar-applications

Opposing voices say that while utilities will sell less electricity in some cases the gas utility might sell more natural gas for the backup generators customers would need. Who knows? Utilities limited by a tight regulatory framework are floating the idea of raising electricity prices to make up for lost revenue. However, this would make the business case for alternative energy sources even more attractive and speed up the drive to grid parity.

I would like to mention to other examples in Europe. What is the situation in your country?

Driver No 2: Grid defection through competition

Another example of competition comes from companies like Honda. Currently, they are showcasing a model home in Davis, California that produces more energy than it needs. Agreed, when you read the article in full you will find technology that may be sophisticated in today’s standards. But we thought the same of many other products and services in the past (Google Maps and Street view, Navigation, Artificial intelligence applications e.g. in the NEST thermostat, driverless cars!). 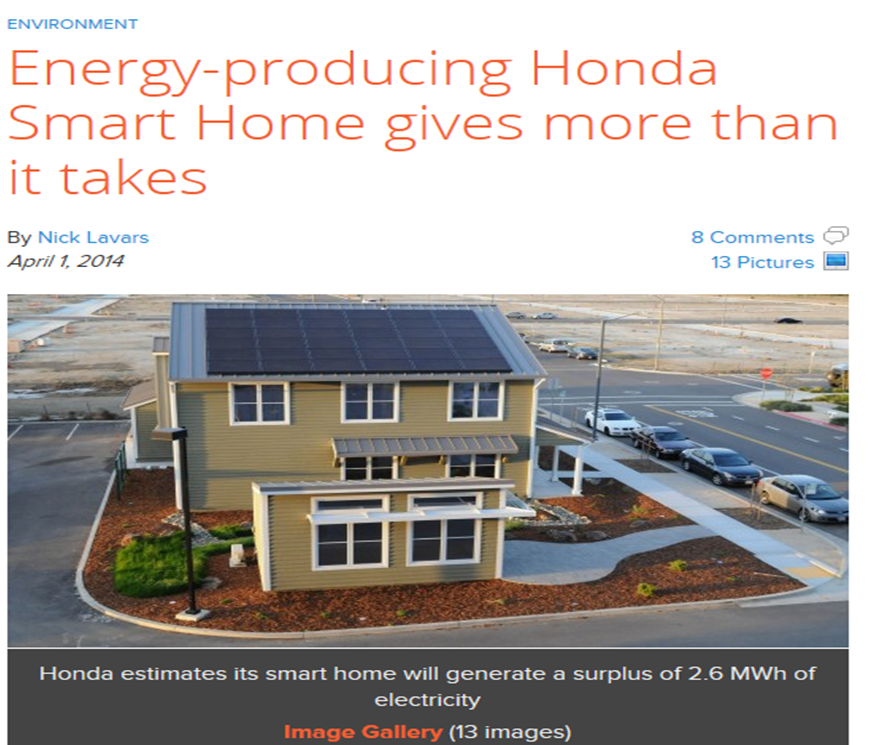 What is the role of the utility when we all have houses like this?
http://www.gizmag.com/honda-smart-home-energy-producing/31380/

Net-zero office buildings are starting to show up in large cities like San Francisco.
As a reaction, just in August this year, the public utility commission in California hinted that “net-zero” might become the building standard within next 10 years. These regulations should further accelerate the drive to grid parity, especially if coupled with increasing energy-efficiency of almost any piece of equipment just about anybody and any company uses. And again increasing amount of distributed generation.

And as if we needed more proof, Accenture just this week of December 8 released a study quantifying the estimated annual losses utilities globally are facing. Look here: http://www.marketwatch.com/story/utilities-face-significant-revenue-losses-from-growth-of-solar-storage-and-energy-efficiency-accenture-research-shows-2014-12-08