I am presenting my story on the World’s top 500 richest person on the globe. I am writing this analysis under the “House of Dragons” – Our Business Prevails.

1) Below screen shot will tell us the sector which are more dominating in the economy. Most of the conglormartes comes from Retail, Diversified(Having more than one industry’s busniess), Software, Real Estate, Internet(including e-commerce), Telecom, Beverages and Hedge Funds. On aggreagation basis,

By simply move the cusror on the area, it will give the name and weatlh assocaited with this industry.

Conclusion : Above are the top six trending sector which makes most of the billionaries so if you want to be billionaries better have industry/busniess area in those heavy economy boster sector. The probablities to become billionaire will be more than 😉 ! All the Best 🙂

2) Below is the pie chart consist of Country’s name, Wealth associated with it and Number of Billionaire The same analysis in another form, it gives aggragate wealth of the biilionairesof the corresponding country. USA is clearly a outperformer in this regard. Except USA all others countries cumalative wealth of their Billionaires falls under 0-380 Billion Dollar which is far less than USA figure of $1846B. This figure is almost 5times to every country’s cumalative. 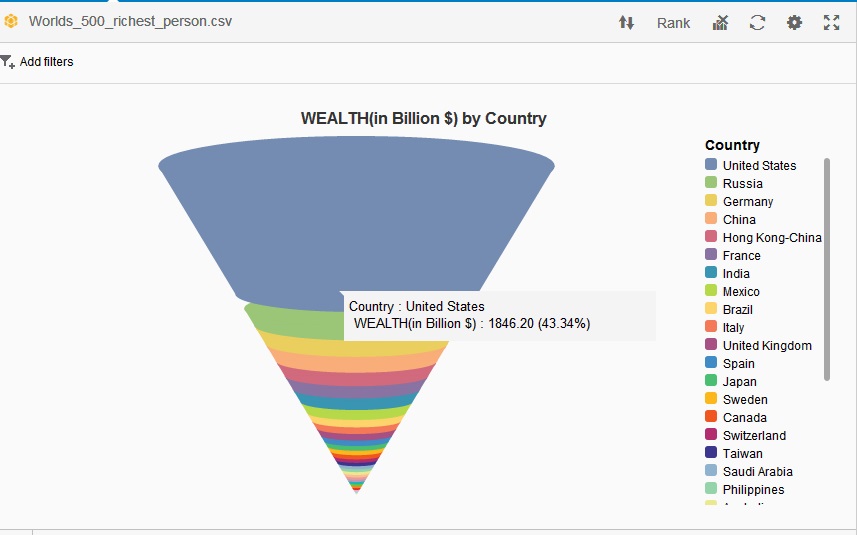 3) Below is the pie chart gives the Name,Rank, Souce of Wealth, Wealth and Country of all the 500’s Billionaries

We can have look of billionaries country wise for a specific countries by filtering the value based on citizenship. World’s top 5 Billionaries are :

4) Below is the bubble chart which depits the individual contribution in percentage to the cumilative wealth of 500’s.

5) Below is the pie chat for the contribution of wealth on Gender Basis.

6) Below is the tree map for the wealth creation on gender basis by each country.

Distribution of Male’s and Female’s in 500’s Billioaire List. This distribution pattern implies that female’s billionaires are much more less in number and in the range of 1-100 Rank they are in countable state.

This graph shows the maximum and minimum age of Billionaires in 500 range. The minimun stoods 30 and the maximum is 97. Most of the billioanires are having wealth in the range of $(0-20)B, which we have already seen in Section 3 and this range is preciesly $(0-18)B and age in the range of 50-80 Years. So guys the favourable age to become billionaire starts from 50. Till that stick to your plans and carry on with Hard Work. There is no shortcut to Success! 🙂

This radar view of Wealth Distribution give the information as below

The same info we can get from Box-Plot view, the maximum age is 97, minimum is 30 and the median remains 66.

8) GDP Vs Cumulative Wealth of Billionaire’s by Country comparision :

USA outperform others in that comparision also, the highest number of billionaries along with the highest GDP numbers! I will go deep dive in this regard in the blelow analysis as well.

Above is the comparision of three measures in the same graph, GDP, Total Wealth(Country wise) and GDP/Wealth  Ratio.

Here is the Heat Map for the GDP/Total Wealth Country wise. Most of the countries having GDP/Wealth Ratio in the range of 0-44. I prefreably fell that more the GDP/Wealth Ratio, more money is evenly distributed within the citizens of the country. The lowest ratio is for Swaziland – 1.02 while the highest remains for Turkey -215.84. 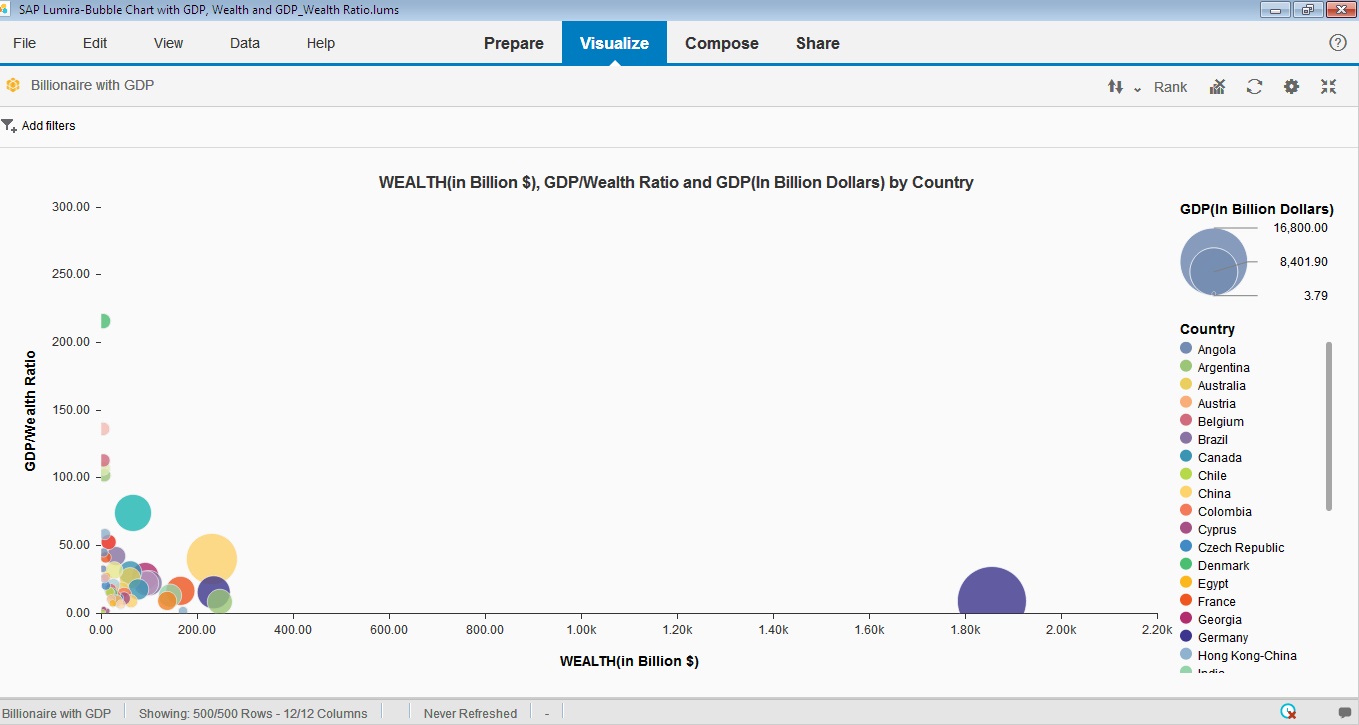 Cumulative Wealth for all the billionaires falls in the range of $(0-250)B excpet USA for which it is $1846B.

Radar Chart represnts that except two countries China and USA, rest of them having GDP less than $5K Billion and USA is the only nation on the globe to cross $10K Billion mark in GDP.

This bubble chart specifies that there are only 3 countries with more than $4KBillion GDP. These are USA, China and Japan. USA GDP is almost 4times of Japan and twice of China. There are almost 40 countries out of 51 totally in 500’s Billionaires list whose GDP is only 10% of USA. The rest are below :

These are the ten countries on the globe to watch for! They are the Backbones of the world’s Economy.

Good news for the people residing in these countries are their probability of becoming billioanaire’s are quite high. Carry on hard work and dream to mak your entry in the list down the line! All the Best.

This is all from my side on this analysis. Any suggestion’s/comments for improvement are more than Welcome! As it famous saying :

There is always space for improvement, no matter how long you’ve been in the business.

Thanks for spending your valuable time!

Very good analysis of the Top-500 Billionaires( quite interesting topic!) and your representation is certainly making it a perfect example of data visualization in many business-relevant forms.. This could be very well used to explain many imp features of Lumira,which I have known so far...Keep it up!!

It was a wonderful presentation, really interesting 🙂

Fantastic visualization on Lumira Ankit, and really amazing the way you present with a fresh and powerful approach. Congratulation!