As you know, SAP is continuously improving their products by providing new releases of their software in all its different components, among them, as one of the most important components, the kernel for SAP NetWeaver ABAP. While providing new releases to implement new functionality, SAP has to maintain compatibility to products that have been in the market for quite a while. To resolve this conflict, SAP has introduced the concept of a downward-compatible kernel, i.e. a kernel that is created for a newer ABAP release but can still be used with older ABAP releases. 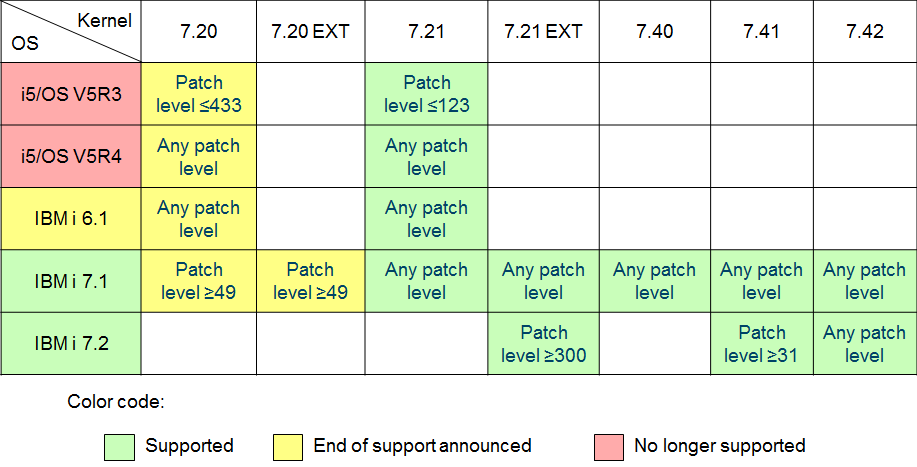 As you can see, the kernel releases 7.20 and 7.21 are supported down to IBM i V5R3M0, which is no longer in maintenance at IBM since end of April 2009. However, SAP has recently discovered that some incompatible changes were introduced with kernel release 7.20, patch level 434 and kernel release 7.21, patch level 124, so that kernels at this or a higher patch level require a minimum release of IBM i V5R4M0. If you are still running at IBM i V5R3M0, you must stay below those patch levels or upgrade to a higher operating system release (recommended!). SAP is planning to undo these changes, but the corrections will not become available before the next stack-kernels (SAPEXE and SAPEXEDB), which are planned to be shipped in the first quarter of 2015.

SAP will end support for kernel release 7.20 in the first quarter of 2015 (see SAP Note 1744209). Around that time frame, a new kernel release will be shipped for the 7.2x line (most likely named release 7.22). SAP is planning to require a minimum operating system level of IBM i V5R4M0 for this kernel release, even though it is downward-compatible to SAP NetWeaver 7.00, which was first released for IBM i V5R3M0.