OData is an open standard protocol that allows service providers to define access to their resources in a standardized manner. The service definition is available via the service metadata document (EDMX).

E.g. If the user wants to access Employee with primary key as 1, the details of the URI would be http://<server name>/<service name>/Employees(1) with the HTTP GET operation

The data format for exchange is ATOM XML or JSON

What makes the OData protocol very flexible is the availability of associations which defines the relationship between Entity Sets. For example, Let us say when retrieving Employees you would also like to get information about their HR and if this (HR) is defined as an association then this is possible in one single call and also directly by modifying the URI appropriately.

With the OData Adapter available in the Receiver channels of HCI you can connect to any OData service provider and perform the required operation required for your integration scenario. The HCI platform provides full pipeline capability also when using the OData Adapter. When data is fetched from the OData Service either in ATOM-XML or JSON format, the Adapter automatically converts this to XML and the payload can be used with any of the steps (e.g. mapping) available in the platform. Similarly, when sending data back to the OData service via the PUT or POST operation, the data is converted back from XML to JSON or ATOM-XML format automatically by the Adapter.

The OData Adapter in HCI supports the v2 version of OData Protocol. 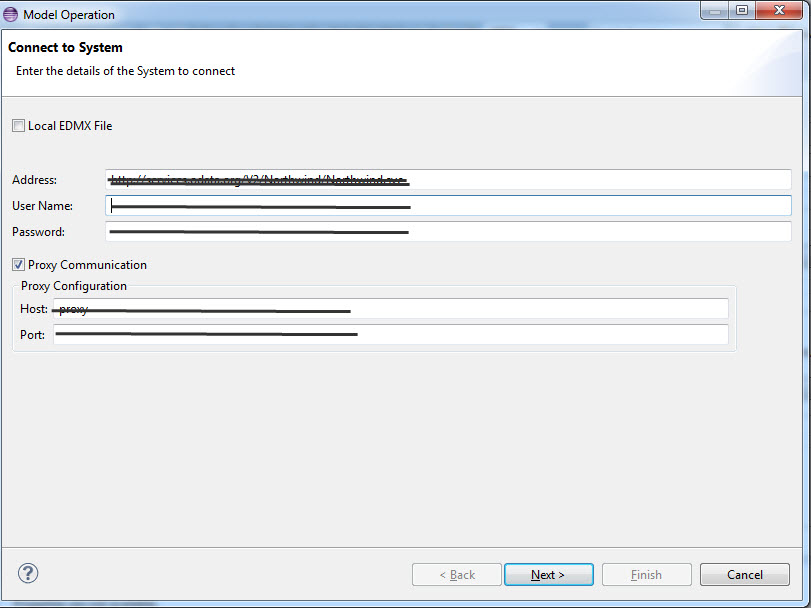 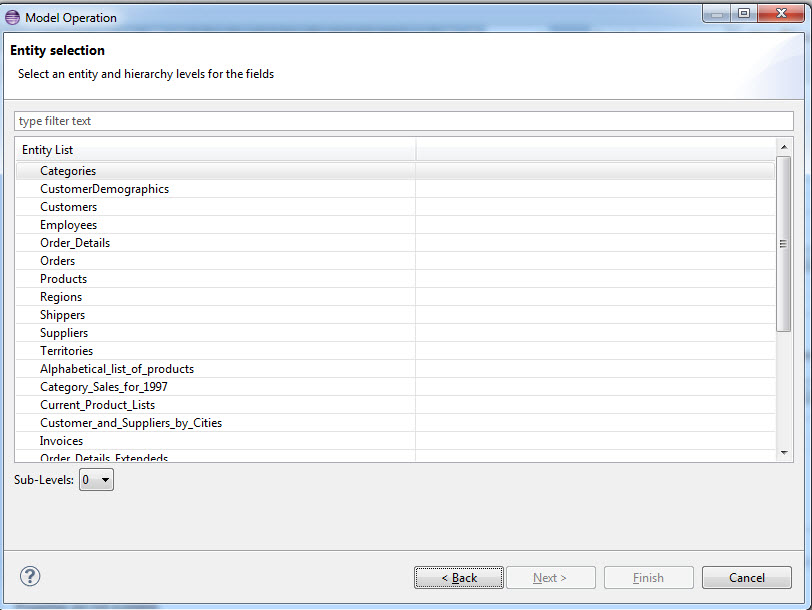 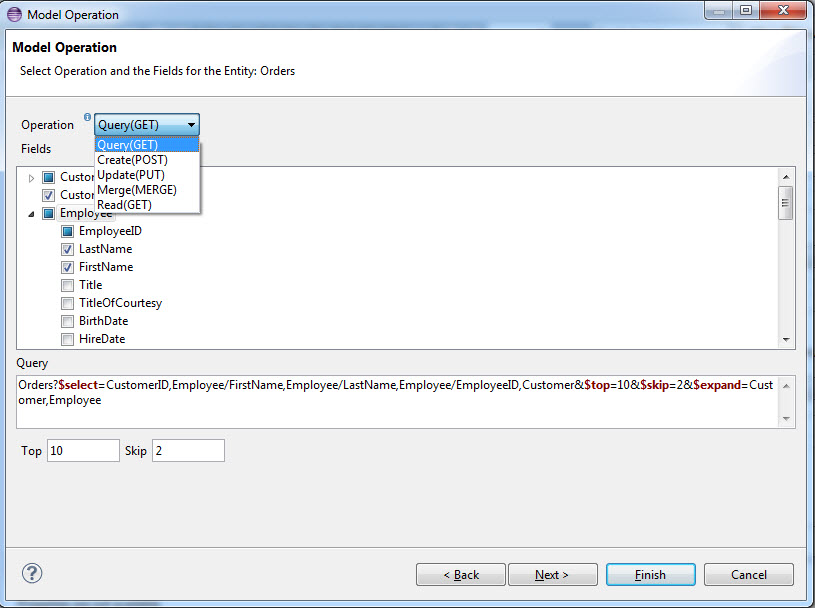 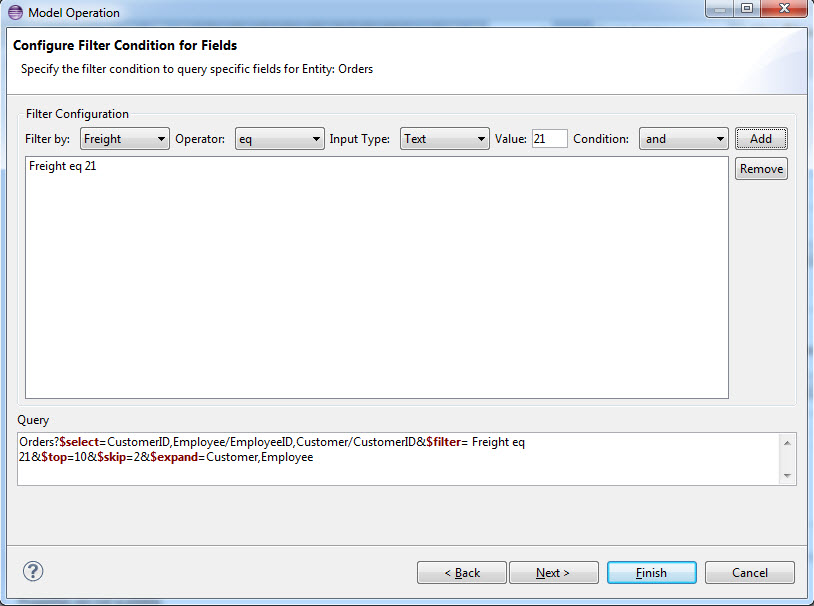 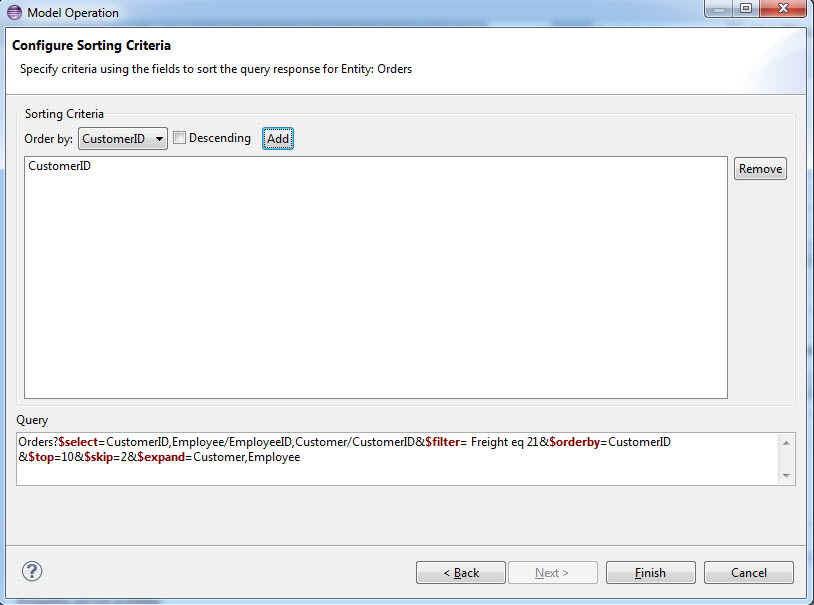 The filterable and sortable fields are prefilled thereby allowing to simply model the operations.

Note: You can access some test services from http://services.odata.org/

By using the OData V2 proptocol as the Message Protocol in the SuccessFactors Adapter you can connect and work with OData services exposed by SuccessFactors. SuccessFactors OData follows the same open standards thereby all of the information mentined above is also applicable for SuccessFactorsOData Service.

SuccessFactors OData service does not have support for batch operation. Instead what is supported is a custom OData import function called UPSERT. The UPSERT operation takes care of creating or updating the records without you having to do this explicitly. The UPSERT operation also allows sending of multiple records at the same time. 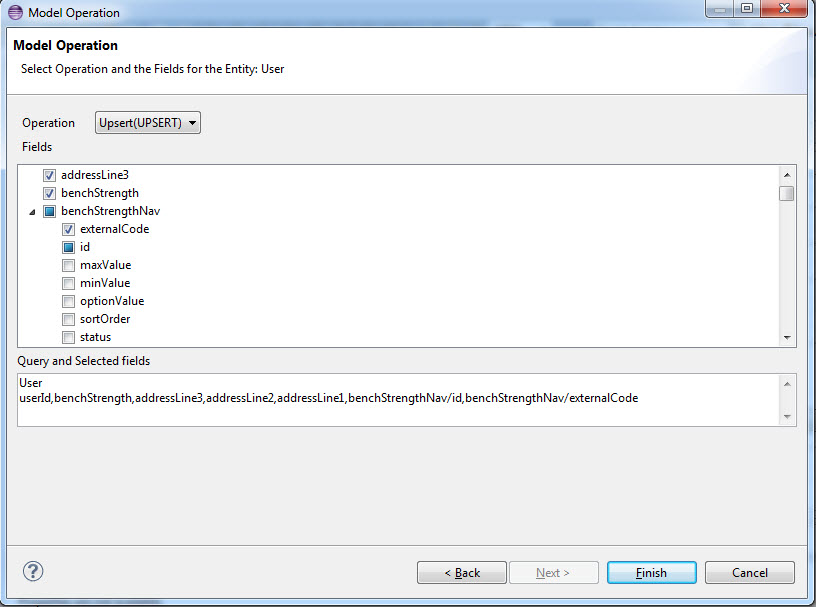 Great blog; thank you for taking the time to author it!

We have a question. Why doesn't the OData adapter have a Sender channel?

Our requirement is - an application will call a OData service in SAP PO, SAP PO will then poll SuccessFactors (using the SFSF OData Receiver adapter); and SAP PO will send the data back to the calling application.

In HCI the Sender Channel is used in 2 cases

1) For polling content from some external system - > SFTP, SFSF

In case of the OData Adapter it does not do both the above. It can be used to connect to an already exisiting OData Service and do the required oprerations.

You seem to be talking about SAP PO. The blog focuses on the HCI capability that is available at present.

In your use case I think you are trying to expose an OData service. Please contact me at sabarish.t.s@sap.com and we can discuss on this specific use case separately.

Thanks Sabrish for such informative blog.

How does one use value from the request and pass it to Odata query operation ?

For e.g. i have a SOAP to OData scenario, i would like to list Sales Orders for a customer and would like to pass the customer number in the SOAP request, this is passed to the OData Query and the response is mapped back.

In the example above, you have hard coded Freight = 21, if this needs be taken from the request message, how would we do that.

Hope i was able to explain my query.

You can use a Content Modifier step as assing the value that is coming from the SOAP message to a header field.

In the query modeler in the "Configure filter condiiton for fileds' choose Input type as header and mention the header name.

If you want more flexibility in the Adapter Query section you can hand type the OData Query and can use the header filed in any sections of the Query.

Thank you, this is quite helpful. What would be the syntax ?

For e.g. the field name in request is "CustomerNo", in the content modifier, i would have a header field called "customer", type = XPATH , Value = ?

Similarly, in the Odata query, i would like to have $filter=CustomerNo eq (?)

I am unable to find documentation on this syntax hence asking for details.

Thank you Sabarish, this is clear.

If I would like to use header or property and assign <CustomerNo> tag, what would be the syntax.

This is solved. When using XPATH, the tool provides a value help to select the element. Used that and also inserted the namespace mapping in "runtime configuration" tab of the iFlow.

This is really helpful information. Thank a lot for sharing!

I am trying a SOAP-to-OData Scenario ,in which we are trying to post to the OData.After configuring the receiver OData Channel ,after selecting the Operation: Create(POST) and deploying the iFLow, We are facing the following error:

com.sap.gateway.core.ip.component.odata.exception.OsciException: Request Payload: Either the OData metadata content available in the server is outdated or the request payload seems to be incorrect = https://<tenandtid>/Automation/AP/XSOData/TestEntry.xsodata_defaultTenant with error => No such entity found in the edmx

P.S : But in the EDMX file i am able to see the metadata content of the OData service.Also when we post the data from the POSTMAN to the table.

Hope i was able to explain my query.It would be helpful if you can guide how to add metadata content.

did you solve the issue? we have the same message and are stuck.

I am also getting the same error. Did  you solved this error? then please guide me

Can you provide more information regarding page size in ODATA. How efficiently we could use that?

Thanks Sabrish for this informative blog. I am OData adapter to fetch messages from IoT in SCP and intend to convert the same into an IDoc for further processing in ECC (via HCC) however I am not able to figure out how can we do this.

Thanks a lot for your help.

Thanks for the Nice Blog.

I have one query? is Odata can act like synchronous Message.

My Requirement is like, both the sides (Source & Receiver) using Odata adapter in HCI. Once the receiver receives a request need to send responses back. Using "RequestReply" we can achieve this one or we need to write any Scripts.

Could you please put some inputs.