I always wondered about the airplane as to how and what causes it to fly. These set of questions always interests me where I need the explanation that makes my brain simple to understand and easy to digest, that means in simple language. My curiosity made my brain pressurized to know more about this machine. I therefore wish to analyze the behavior of an aircraft and actually what concepts endorse its technology.  Today the Data Geek III Challenge using SAP Lumira is giving the users an opportunity to clarify their doubts, carry out their analysis and ultimately get results of all the questions which keep hitting the mind.

At the end of this report, I am really looking forward to exhibit some satisfactory results and conclusions that would enlighten my queries of ‘How and what.’

With the commencement of analyzing and brain storming, I want to draw attention of all the readers of this blog and convey them that after they are done reading this blog they would definitely have essential amount of basic knowledge that would usher the accurate understanding of this beautifully engineered machine.

Each and every graph will show the individual results and bring out a conclusion with it.

Note: There are different types of Aircrafts and the data may vary for each of of its kind. But here a General case of a Fixed wing aircraft is being taken and the data is found out using different links and books as well as some of my hand calculations are also involved.

The data is being taken from the following links/books :

Some common terms to be remembered before going ahead:

1)      Following data is being used to plot the graphs and carry out the analysis: 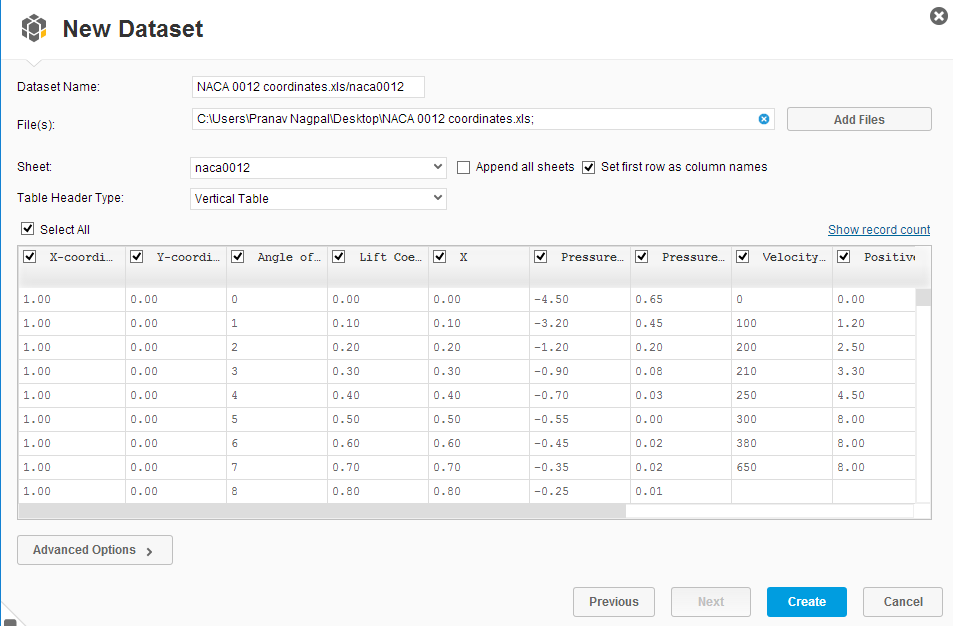 The very first question that catches your brain when you think about an airplane will surely be ‘How does an Airplane Fly’?

2). I wondered how this was even possible that this airfoil (a 2 Dimensional Wing) was able to hold such a large aircraft in air. This will only be possible if a force from below the airplane was much greater than that above the airplane. Then I plotted a graph to see how pressure distribution varied on the upper and lower surface of the airfoil along the chord. 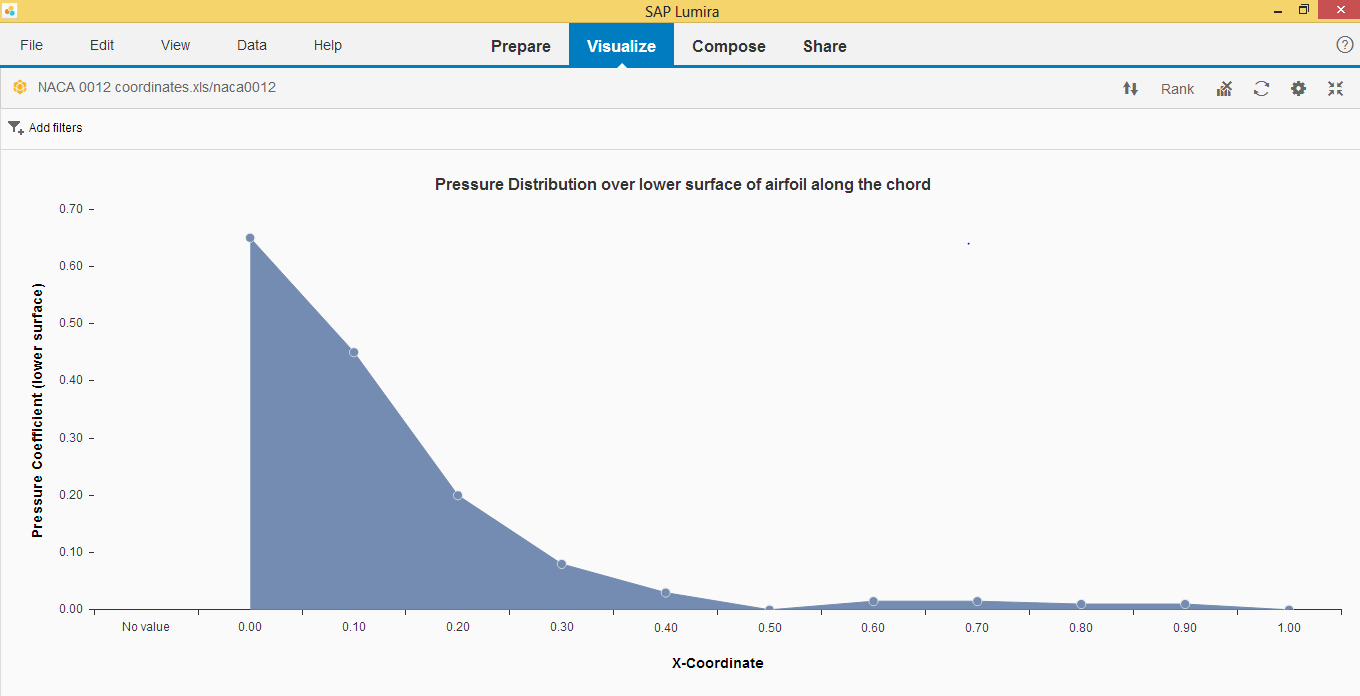 It was seen that the pressure distribution over the upper surface of airfoil has negative values and that on the below surface has positive values, thus giving it a net average pressure in the upward direction. This made a clear conclusion that it was this high pressure from below the airplane which held it up in the air.

4)    3).  Then I thought, if this airfoil shape is so strong that it can Lift up such a huge Aircraft, then what are the values of the lift that this shape is generating .And of course since the lift is varying or rather increasing to take the Airplane up into the sky then it has to change with the angle at which the airplane is flying/pointing into the free stream air. This angle of airplane in technical language is called the Angle of Attack.

Here I plotted a graph to see how the Lift varies with the angle of attack. 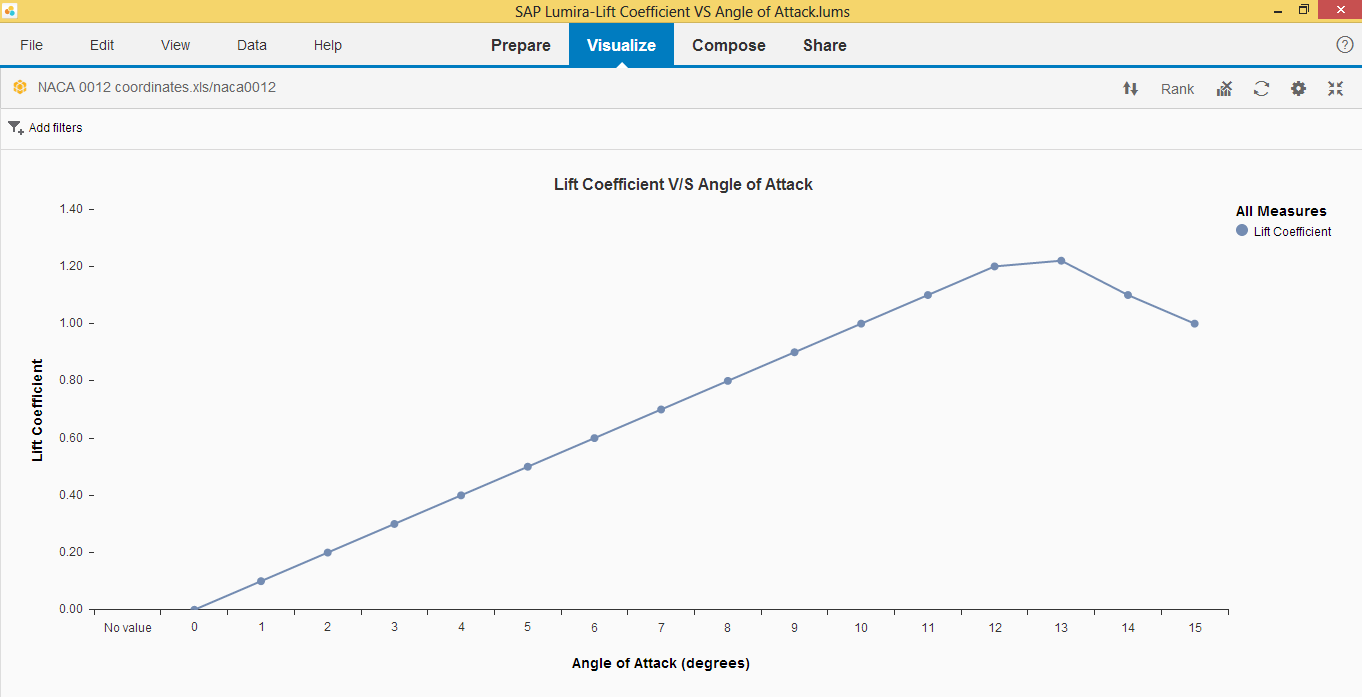 This graph when analyzed, led to an eye catching result, that the lift of the aircraft is increasing when the Angle is increased but suddenly around an angle of 14 degrees the lift starts decreasing. This concluded that the lift generation also has a limit and it is not possible to lift an aircraft above a specific value of angle of attack, rather it will start coming down if the angle is increased beyond 14 degrees.

5)    4). My mind just struck that every object in this world has a limitation beyond which if it is used it will get damaged. There has to be some concrete values on    which engineers must have build an airplane and these values should have a full stop. Then I analyzed more on a perspective of airplanes limitation and came up with great results and conclusions which  follow from the below written basic theory :

Assuming that everybody knows that it is the force of gravity which keeps holding any object to the ground, the airplane needs to overcome this force in order to fly above the ground. This means that the lift force pulling the airplane in up direction should me more than the weight of the airplane which is holding it down to the ground. This thought clearly states that the ratio of the lift force to weight of aircraft should be greater than 1 (Lift / Weight) to make the plane go high in the sky. This ratio is technically called as Load Factor. So greater is the Load factor, the greater is the force which is pulling it up and greater becomes the height from the ground at which airplane is flying. 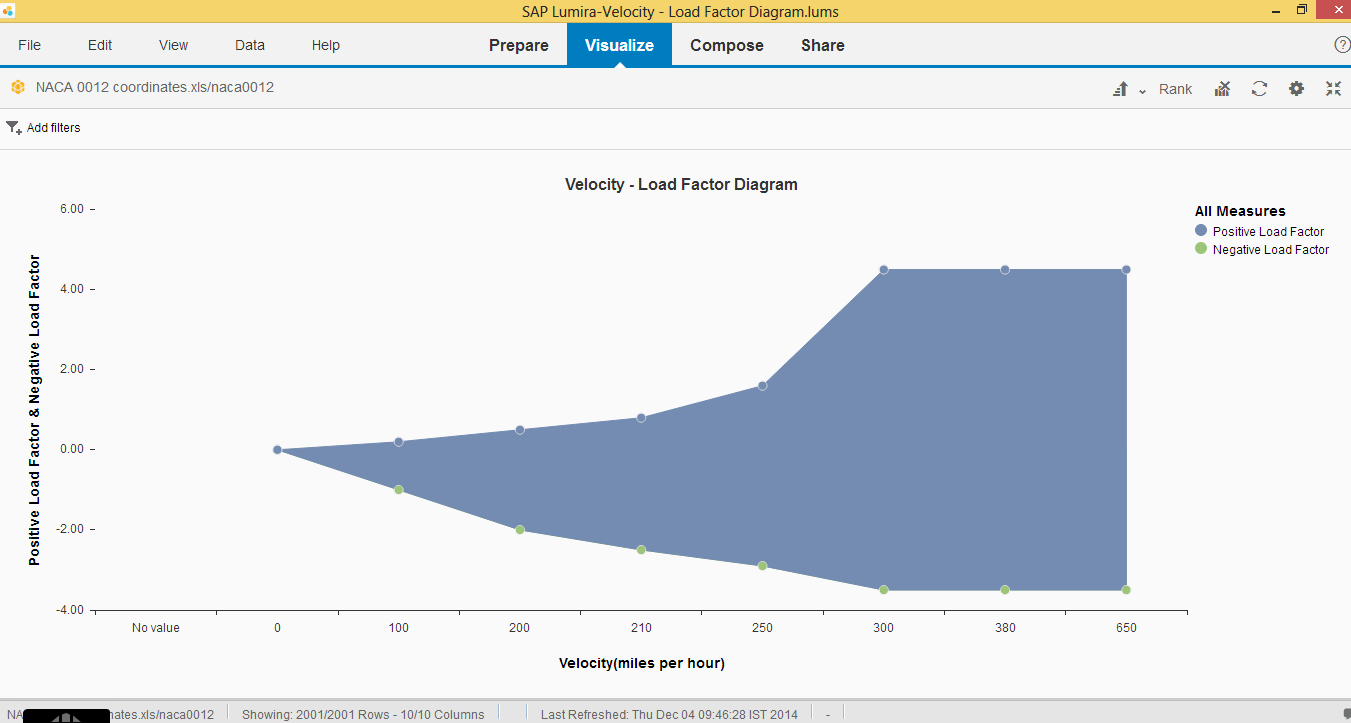 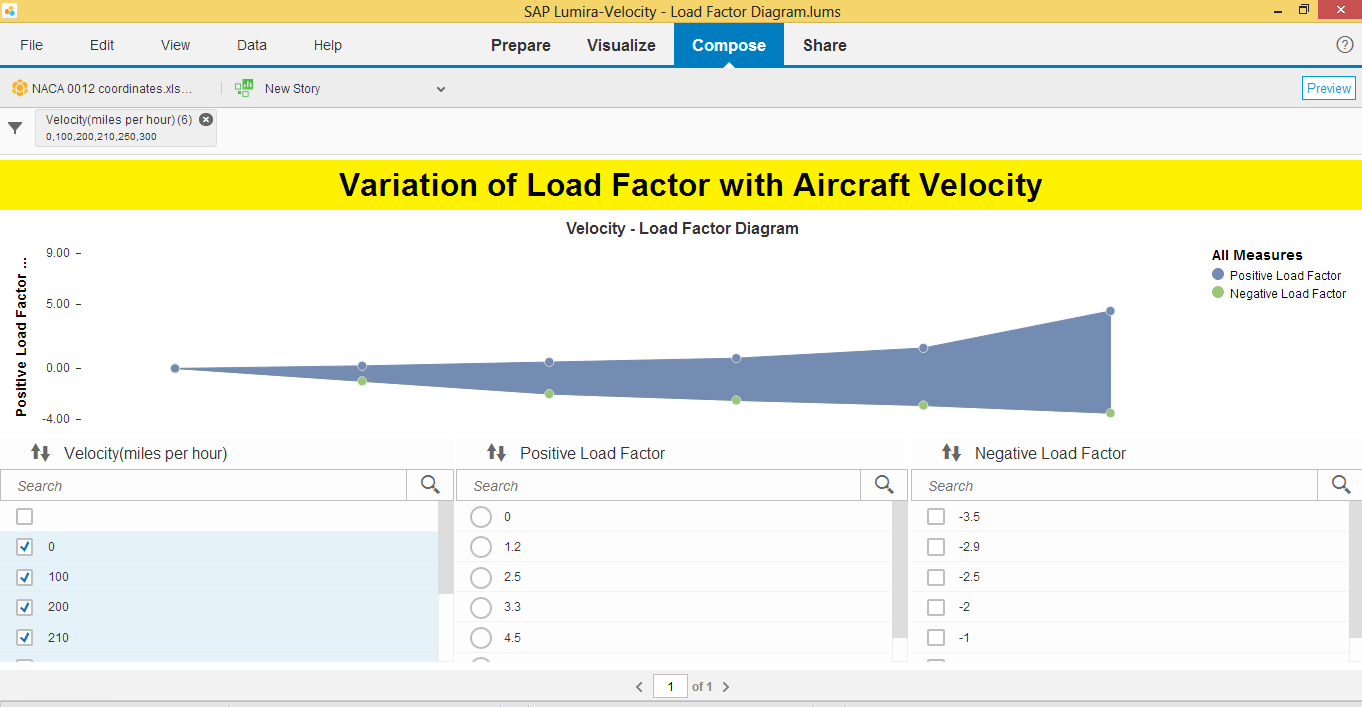 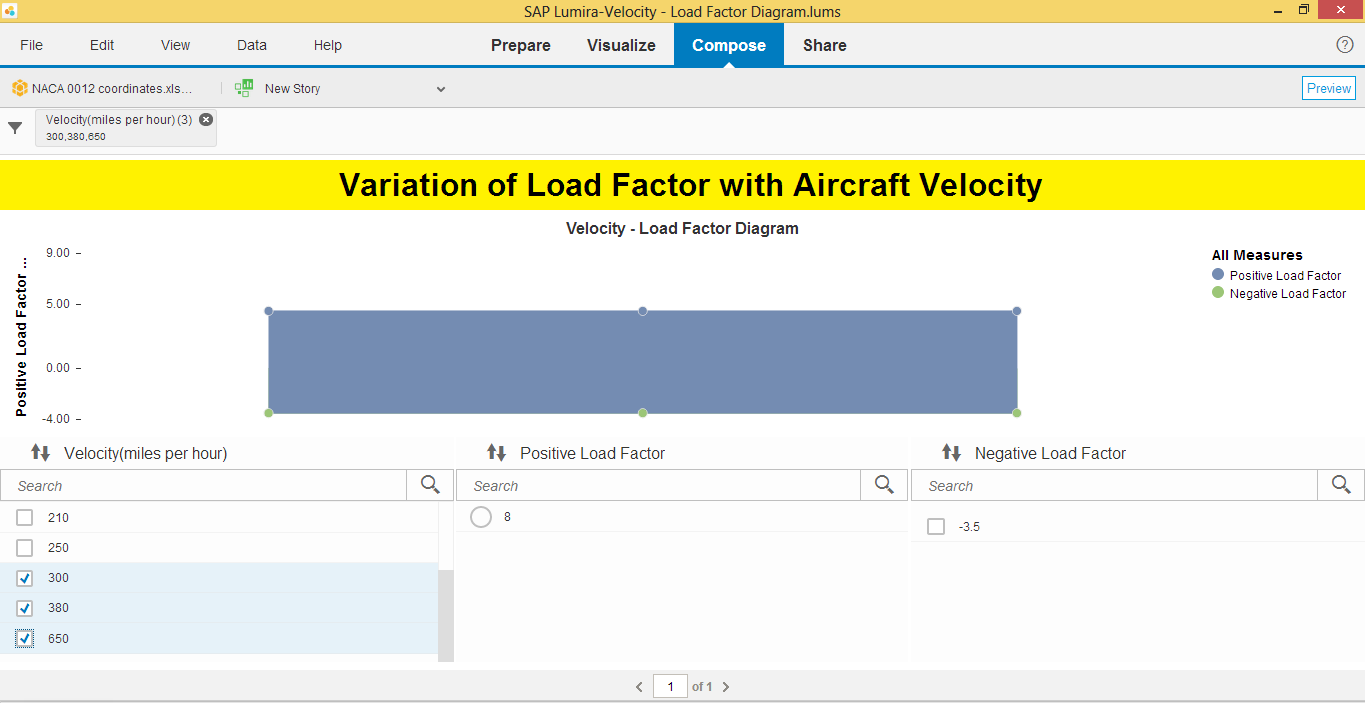 6)    5). Now if above point gave me an analysis in terms of speed/velocity and load factor then for sure there has to be some limit also on the altitude to which aircraft can fly. Let’s find out… 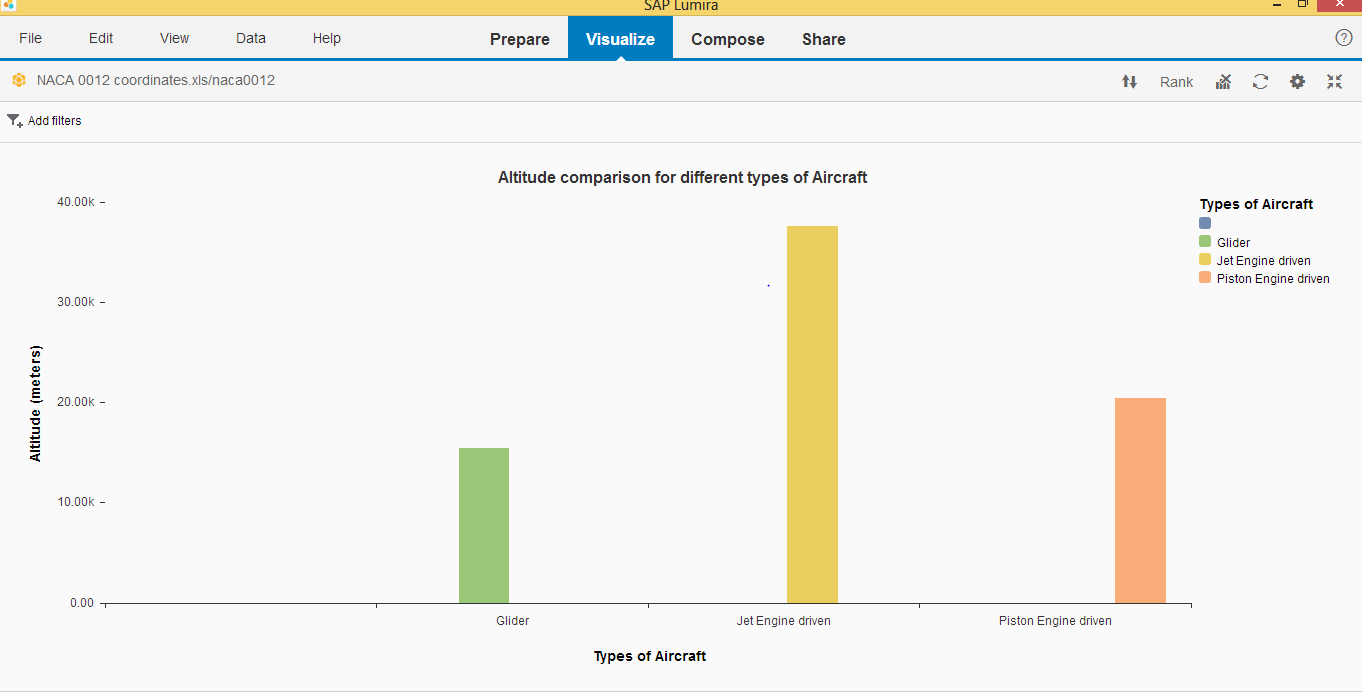 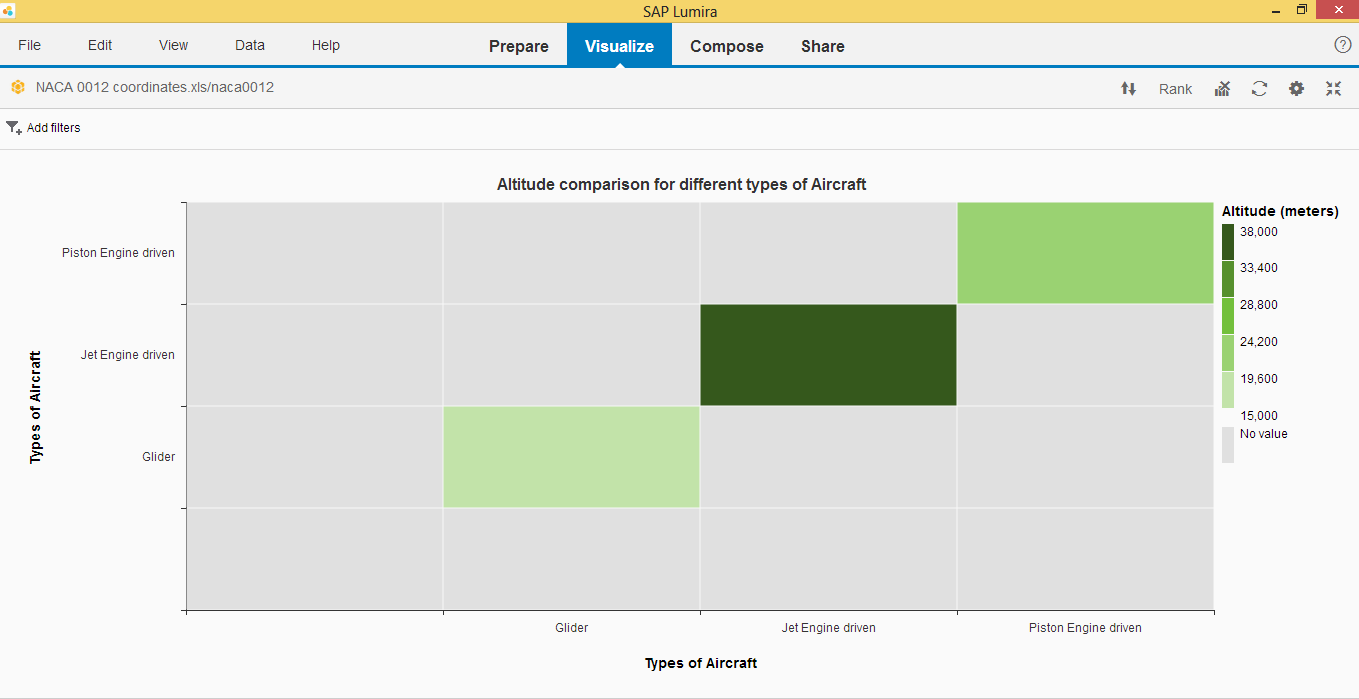 The above analysis clearly depicts the concept  and basics of ‘How an airplane flies’ and what all factors govern its functioning  that make this machine as one of the best invention  of our generation. Every analysis which was carried out on the different aspects of an airplane drew concrete results and conclusions. Where it depicts as to how the power of SAP Lumira can actually be implemented in analyzing and knowing the technology in a lucent way.

Very informative... 🙂   Explaining how the airplane fly using Lumira, is very interesting. I mean those graphs gives that extra weightage to your explanation 🙂

Thanks a lot Shailesh 🙂

A very intersting info regarding how airplanes fly.

That is some cool stuff you have written over here in you blog. 🙂 Physics is my favourite time pass and the way you have provide the aerodynamics details that how exactly aircraft fly ..just made my day 😉 Its too cumbersome to read all this stuff over internet without getting bored . Although you can add the below image just to easily understand the common terms like Airfoil , Chord etc. which were mentioned by you above. 😎 (I am not that much sharp-minded  😛 )

Looking forward to more blogs from you. 🙂

Thanks for such great comments 🙂 . Specially for the diagram. I will definitely add it to the blog. 🙂 You can even vote for the blog 😛 , will appreciate a lot.