Today’s enterprise concerns about every aspect of our internal LAN networks just as much as we had to worry about our WAN connections. Through the growth of the Internet and the technologies that have been developed around them, data is more vulnerable today than at any point in the past. Data transfer is so integral to the proper flow of business processes and corporate communication that it must be a high priority for any company.

Regardless of the industry, every company has an obligation to keep private information secure. Whether it is customer data or employee details, a company is required to take security measures to keep personal information safe. Laws and legislations have been passed, and more are proposed that require certain types of traffic (legal, financial, and health) to be securely encrypted whenever they cross unsecure networks.

SSH or Secure Shell is a cryptographic network protocol that allows data to be exchanged using a secure channel between two networked devices.  It provides strong authentication and secure communications over insecure channels. It can transfer files using the secure file transfer protocol  (SFTP) or secure copy protocol (SCP).

It uses public-key cryptography to authenticate the remote computer and allow it to  authenticate the user. It was designed as a replacement for Telnet and other unsecure remote shells, which send information, notably passwords, in plaintext, rendering them susceptible to packet analysis (internal and external threats).

SSH tunnelling allows you to create an encrypted connection between Source system (SAP) and the target system (SFTP Server) at the remote site. Over this single connection, you can run the external OS commands using the FM SXPG_COMMAND_EXECUTE to transfer the files securely.

There are multiple mechanisms for transferring files using the SSH (Secure Shell) protocol. In this document, we are focusing on Secure File Transfer Protocol (SFTP)  and Secure Copy Protocol (SCP) .

Secure File Transfer Protocol (SFTP) is a subsystem of the Secure Shell protocol. SFTP has several advantages over the non-secure FTP. First, SFTP encrypts both the username/password and the data being transferred. Second, it uses the same port as the Secure Shell server, eliminating the need to open another port on the firewall or router. Using SFTP also avoids the network address translation (NAT) issues that can often be a problem with regular FTP.

While SFTP is very similar in operation and commands to FTP, developers may find SCP much easier to use in automation scenarios. Both SFTP and FTP are session based, whereas, SCP is a single copy command.

SSH uses public-key cryptography to authenticate the remote computer and allow it to  authenticate the user. An SSH identity uses a pair of keys, one private and one public .The Public and Private key pair comprise of two uniquely related cryptographic keys.

The Public Key is what its name suggests – Public. It is made available to everyone via a publicly accessible repository or directory. On the other hand, the Private Key must remain confidential to its respective owner.

During authentication, the SSH client and server have a little conversation about your private and public key. If they match (according to a cryptographic test), your identity is proven, and authentication succeeds.

To generate the private/public keys, you need to install the SSH client tool in the source system.

It copies files between hosts on a network. It uses SSH for data transfer, and uses the same authentication and provides the same security as SSH. SFTP command is session based, whereas, SCP is a single copy command. We may find SCP much easier to use in automation scenarios. 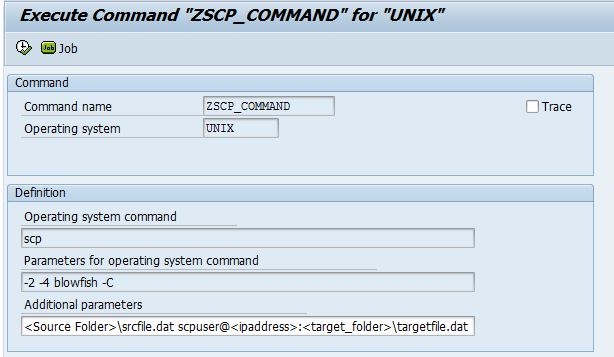 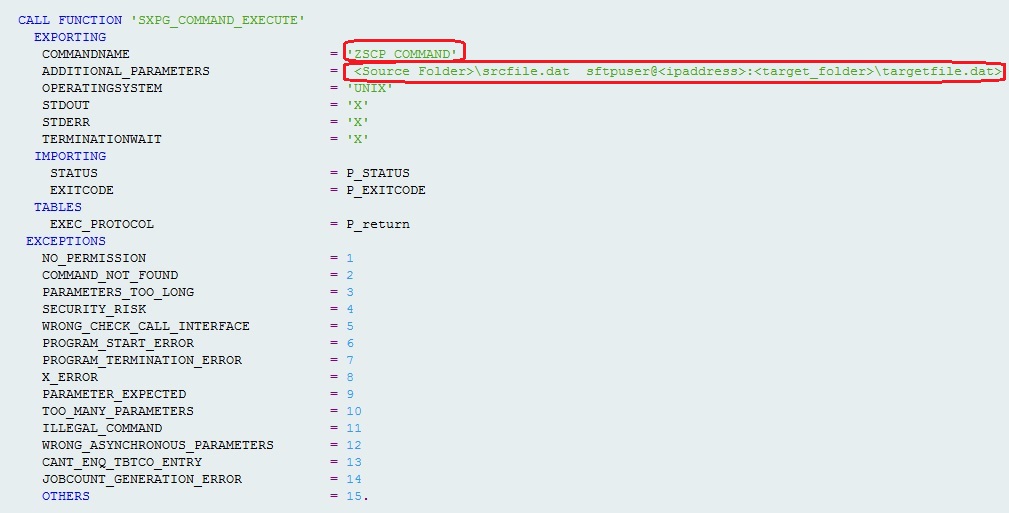 COMMAND NAME: Specify the name of external command which is created in the SM69. For example: ZSCP_COMMAND

ADDITIONAL_PARAMETERS: Specify the parameters to execute the external commands.

Summary for using the secure protocols:

Thanks a lot for sharing this 🙂

That's a very informative article, many thanks!  I just have some questions below:

Appreciate your reply as we are facing the exact requirement to connect to SFTP server to/from SAP but has no idea at all.  Thanks!