Are Precast Net-Zero Homes the Wave of the Future?

What is net-zero home?

According to experts, a net-zero structure is one that produces as much energy as it uses throughout a 12-month period. There are several ways to approach net-zero construction, but Lafarge and its partners Stantec and the NGO Habitat for Humanity took net-zero construction in an unexpected direction. Using precast concrete, Lafarge built a revolutionary new duplex home in the Riverdale neighborhood of Edmonton, Alberta. 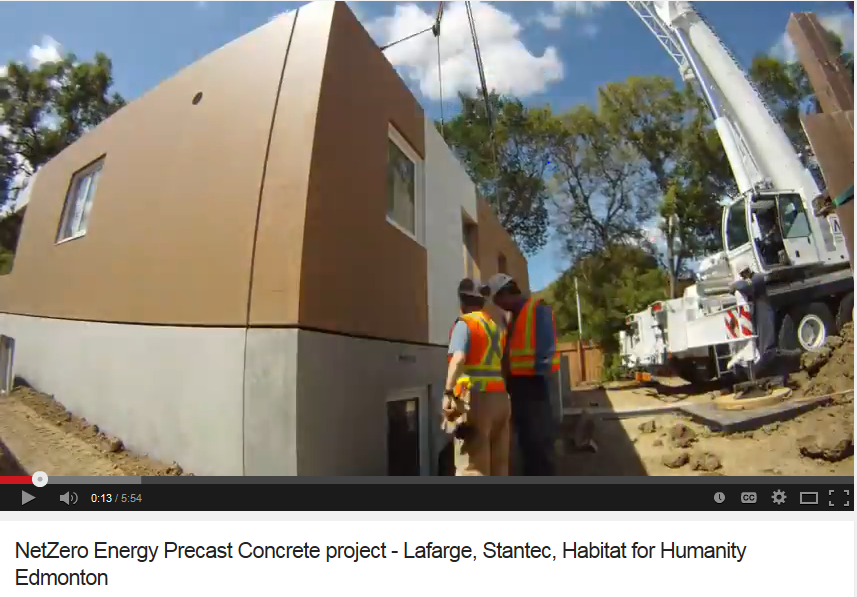 Development on the NetZero Precast Concrete Duplex project started in October 2011, and by June 2012, volunteers were erecting the precast concrete walls. This home used two kinds of concrete: Hollow-core precast concrete formed an airtight, energy efficient shell and ready-mix concrete was used to make the basement slab, footer, and a 2-inch thick coating over the precast walls.

A Lafarge plant in Edmonton manufactured the precast walls, and builders used Lafarge gypsum for the interior walls. In the end, the completed structure measured 7,270 square feet. Each home has 1,600 square feet of living space and a 500-square foot basement.

Lafarge and its partners worked hard to not only create a building that was practical, but also visually beautiful. The team designed the home with contrasts between color and texture, and they went the extra mile to add green roofing and plenty of green wall planters. The home is topped by a solar array that is designed to be both functional and aesthetically pleasing.

At the Cutting Edge of Sustainable Home Technology

You might think it would be nearly impossible to design an energy efficient concrete home that can stand up to Alberta’s winters. However, the design team actually relied on the properties of concrete as one of the core factors that makes the home energy efficient. Concrete warms in the daytime sun and releases the collected heat at night, making it an ideal choice for this project. There are also several other things that put this home at the forefront of sustainable technology:

So how does this duplex stand up to traditional timber or steel construction? The average home has an insulation rating between R16 and R20. According to Lafarge, this home has three times three times that, with wall panels rated for R44 and the roof rated at R88.

Two families selected by Habitat for Humanity took ownership of these homes on October 17, 2014, but that doesn’t mean Lafarge is finished with this project. Both Lafarge and researchers from MIT have been monitoring the homes’ performance, and they will continue to do so through 2015. Lafarge plans to use the data they have collected from this project to forge ahead on more sustainably built homes and commercial structures.

The NetZero Precast
Concrete Duplex has already received a lot of attention. In fact, it won two of Alberta Construction Magazine’s Top Project Awards in 2013 – the Project of the Year award, and top honors for sustainability. Besides achieving net-zero efficiency with this project, Lafarge is also hoping to receive LEED Platinum certification. The data that will be collected over the next year could prove that sustainably built precast concrete structures are the wave of the future.

To learn more about the See more –  http://www.youtube.com/watch?v=Yrg292dwSTA

Progress in other Countries

Though newer in some areas, some of the concepts mentioned have been in play in other countries for some time.  For example in Germany 10% of home heating energy must be renewable.   Also in Germany concrete housing construction if standard.

Other Ideas for Sustainable Housing?

These concepts are only scratching the surface of what is possible to build smart, sustainable housing.  Other ideas are smart metering for solar, heating, cooling and water.    I would love to hear about other creative projects in the Building Materials or Housing area – please share stories or links!

I strongly like this. Concrete, and many other building materials, can make a huge difference in energy efficiency.

This is a huge market opportunity for companies in the building materials industry, and many companies already play a huge role in achieving these targets.

There is a lot of discussion about the energy intensity & CO2 emissions of the cement or glass industry. This story is a good example that building materials can make a huge contribution to overall energy efficiency & CO2 reduction overall.