Smaller than a Hockey Puck and a “Pétanque” Ball: The BLE Beacon 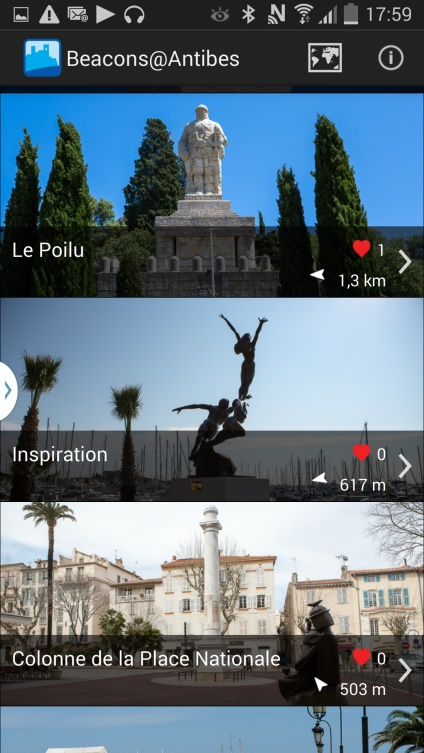 But so powerful! That’s why SAP Labs Montreal (the hockey fans) and the City of Antibes in the South of France (the pétanque

devotees) joined forces to experiment it for real, in advance of SAP releasing a Beacon Management Platform for SAP Mobile Platform (SMP) on HANA Cloud next year.

A Bluetooth Low Energy (BLE) beacon in itself looks quite innocuous. It is small and relatively inexpensive (30 Canadian $ or less).  It quietly beams out its ID about 10-30 meters away on Bluetooth every few seconds. The real power is in its role as a “proximity” silver bullet, triggering a reaction into any number of mobile applications that happen to catch its identity and recognize it. BLE Beacons are being harnessed by Retail and many industries, mostly for pilots, many indoors.

Allowing objects that are not considered near or far as computers to communicate. Make inanimate objects (monuments, places or street furniture) “smart”, without power plug and without expensive GSM communication (this is consequently not traditional M2M). As soon as objects can communicate, they need to be organized in managed networks: this is where the Internet of Things (IoT) starts. Imagine if objects become transmitters of information and intrinsic value generators, then we can start to consider, what all analysts agree to say, that IoT may be a major paradigm shift. What a challenge! Where is the magic? In the idea that intelligence is not located in the beacon that just emits regularly its identifier, but in the user’s smartphone and, of course, in the cloud hosting service contents.

So, indoor use looks quite promising, and short-term pilots, such as guidance around an event site, give good results. Let’s go one step beyond, into the outdoors, and for a longer run. How easy is it to use Beacon Power when you have to protect the device against the elements, ensure its security and still maintain its accessibility for the mobile apps during several months? Public spaces are not meant to shelter non-ruggedized items that may be accessed every few months. 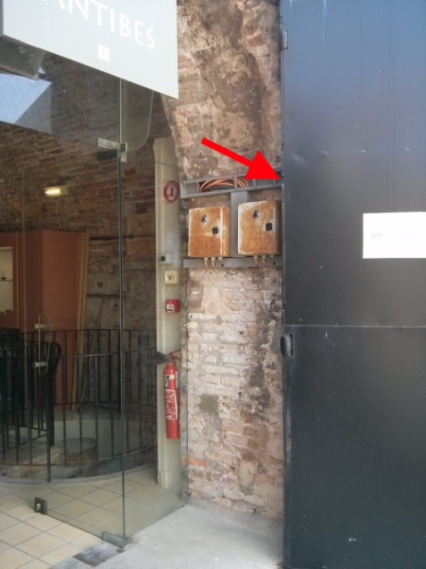 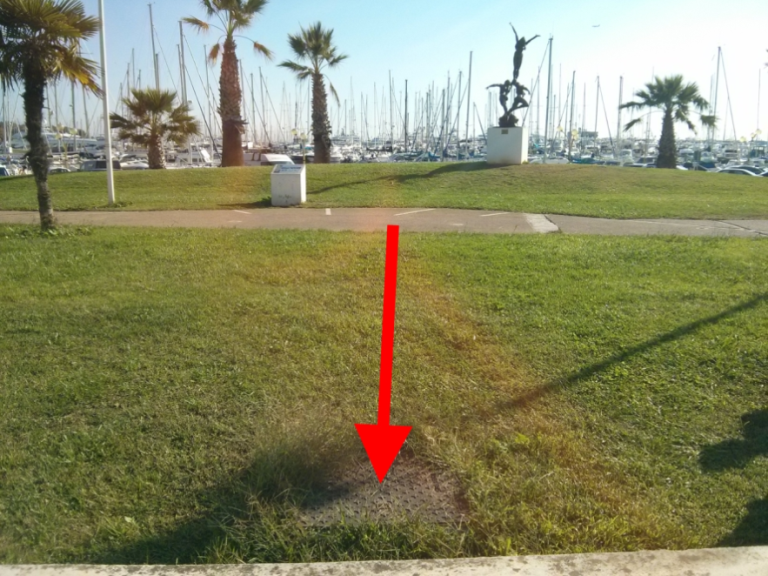 For its Tourism use case, the IT department of the City of Antibes had to find locations, such as the sample ones illustrated above, arrange deployment with public work departments, test devices for power and for visibility.

First observation: beacons supposed to run for several months on the same battery may experience power decrease or even battery failure faster than expected. When ready to roll out, the deployment team realized that several beacons were already too feeble to be installed.

This brought up another practical question: how long before the deployment team has to get out again, and either replace the failing beacons, their battery (if accessible), or bring them back for recharge? A regular survey is being put in place, with a city employee touring the sites, checking the strength of the emission with the city app, and the charge level with an app provided by the beacon makers. The pilot project is planned for 6 months. At least one round of full replacement is probable, since only battery-based beacons have been used and the use case calls for a relatively large emission radius.

Using Beacons for Real – Managing a Fleet of Beacons

Along the same very practical line of observation, it is difficult when on site with several beacons in range, to identify which is which, to tag it and to later link the proper actions and contents to it. Admin teams may have to tinker with their positioning and the power of the beacons to discriminate between locations, send the right notifications to the users and accumulate truthful statistics.

To cope with hundreds of deployed beacons, which seems to be a low-to-middle sized use case, the use of an efficient and centralized management solution is mandatory. Even with only minimum features like a map to localize beacons, activity monitoring per beacon, possibility to activate, deactivate or change the service linked to one beacon, an IoT management platform greatly reduces the cost of beacons management. Note that as beacons cannot communicate with the server but only with users’ smartphones, the monitoring capabilities are more service-monitoring than device-monitoring (closer to probing systems rather than to traditional SNMP or log parsing monitoring tools).

Using Beacons for Real – Real-Time Insight is the Reward 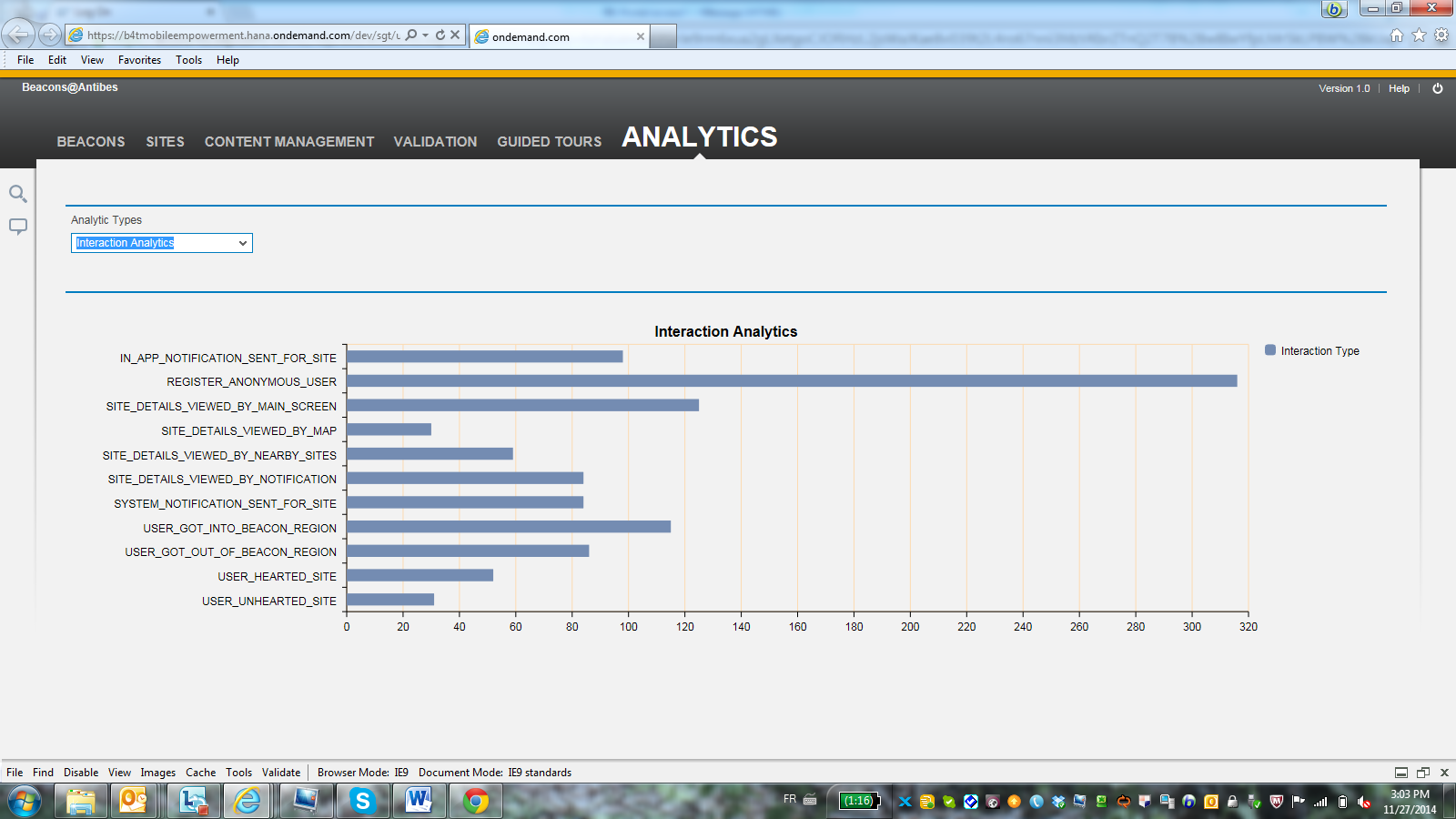 In the end, in the back office platform, you can choreograph your beacons, and their associated services, based onto your specific needs.

This is why Antibes has high hopes for this technology: to meet the challenges of tomorrow’s city, by developing specific geo-localized services and creating value. 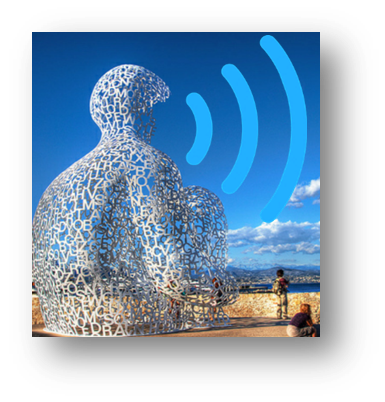 Indeed, especially in the tourism domain, digital disrupts established patterns and calls on all actors to adapt, change and innovate to strengthen tourism. 80% of the wishes of foreign visitors relate to the culture, heritage and lifestyle of the country they visit. Smartphones, tablets and social networks are changing consumption patterns, making tourists permanent interconnected users, publishing their experiences in the world in near real time. Strategies of local authorities require the development of innovative services to support these uses and enhance their attractiveness.

The next few months of collaboration will continue shedding light on the best practices of working with BLE beacons in real life. All the while, SAP Labs Montreal, SAP Labs France and the IT department of the City of Antibes pledge that the app will provide a transparent service to tourists and residents of Antibes, helping them discover the city one smart site at a time.

This blog itself is a collaboration between Patrick Duverger, Director, Logistics and Information Systems at City of Antibes-Juan les Pins, and Nolwen Mahé, Director, P&I Technology – Mobile Platform Development, SAP Labs Montreal.  The beacon image featured is from Ubudu.

Find out what the #BLEBeacon is and what it is used for! @SCNblogposts #MadeInCanada Smaller than a Hockey Puck and a &amp;#8220;P&amp;#233;… | SCN

Great job Nolwen and Patrick! Can you comment on the availability of BLE on smartphones and tablets? Are most of today's smartphones capable of identifying beacons?

Indeed most of them do.  Apple started with its implementation both of beacon detection and beacon capability (you can turn the phone itself into a beacon) with iOS7.  Android implemented BLE beacon detection in Rev.4.3, but the implementation was not too stable.  In the Pilot, which will have its public launch about mid December, we recommend Rev. 4.4 at least.

Happy you like it, and make sure to pass by Antibes within the next 6 months to experiment it for yourself!