The packaged integration enables employee history and changes to employee history to be transferred from SAP ERP HCM to SuccessFactors Variable Pay. The second part of the process – transferring variable pay results back to SAP ERP HCM so they can be processed in Payroll – is due in a later Service Package. Like most process-based packaged integrations, this packaged integration only uses middleware. Currently only SAP Process Integration (PI) is supported, but support for SAP HANA Cloud Integration (HCI) is also planned. More specifically, PI version 7.11 SP12 or above is required. The figures below demonstrate the process and data flow for this scenario. 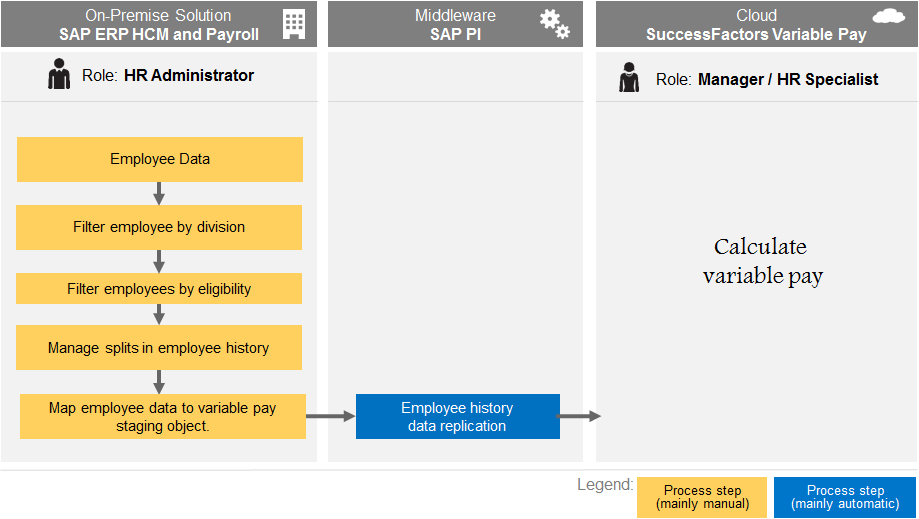 Once the remaining integration is provided – which is planned for add-on 3.0 SP2 – then the full process flow will look like this: 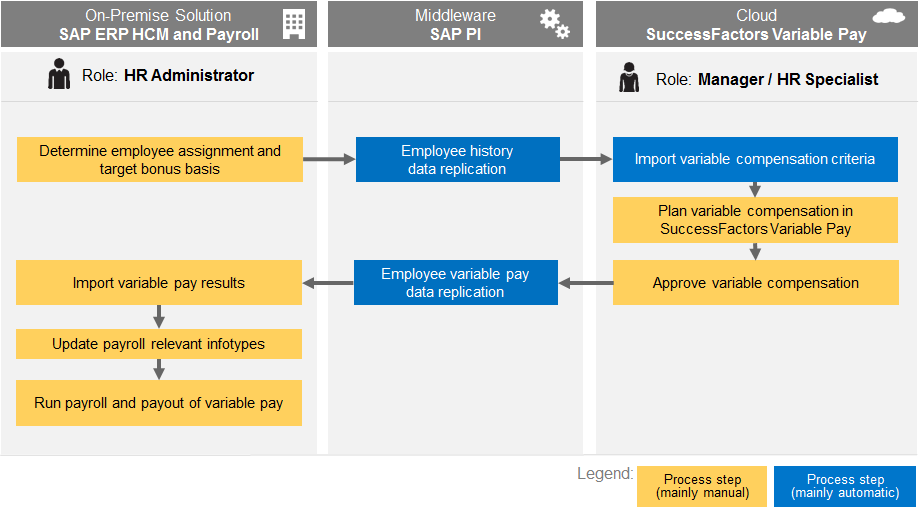 The add-on includes a number of new features and functionality:

The screenshot below shows the selection screen for report RH_SFI_SYNCH_VAR_PAY_DATA. 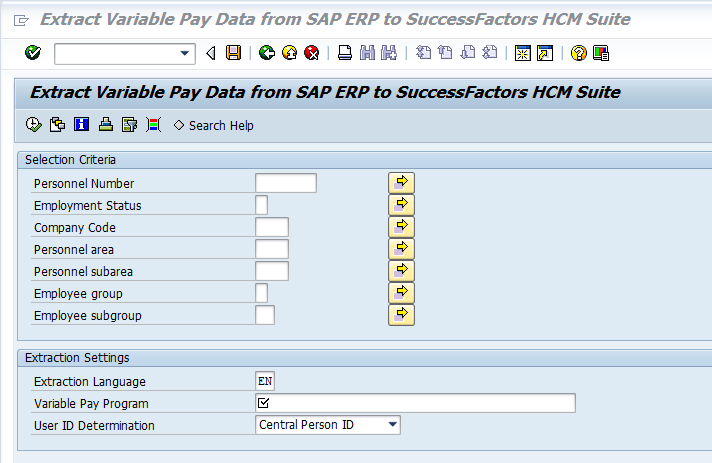 The screenshot below shows the selection screen for report RH_SFI_SYNCH_VAR_PAY_METADATA.

There are several important notes regarding the operation of the integration:

Configuration in SAP is performed within the IMG under Personnel Management > Integration Add-On for SAP ERP HCM and SuccessFactors BizX > Integration Scenario For Variable Pay Data. The node can be seen in the screenshot below. 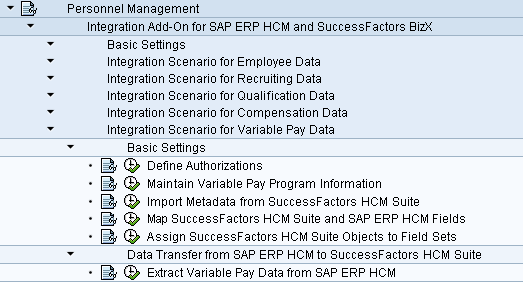 The following customizing activities need to be performed:

*Note that this activity is not transportable

Once this configuration has been completed then the add-on is ready to use. To use the add-on, simply run and/or schedule report RH_SFI_SYNCH_VAR_PAY_DATA (also accessible via transaction HRSFI_VARPAY_DATA).

The latest support package adds the first half of process integration to the packaged integrations for SAP ERP HCM customers who want to perform Variable Pay planning processes in SuccessFactors. Although it does not yet transfer the resultant process data back to SAP ERP HCM for payroll processing, this is planned for a later service package. The integration has some technical differences from previous integrations and these should be thoroughly reviewed and compared to the existing landscape, if any.

Thanks for very helpful blog.

What is your experience - how flexible is this data extraction report RH_SFI_SYNCH_VAR_PAY_DATA?

Our eligibility-rules are complex. It seems that the only place to handle this logic is here, I mean in the employee history interface between SAP and SF. But it is hard to find out (just by reading documents) can we use the standard interface or do we have to build something "tailor-made" for this.

Another thing - it looks like it is not possible to run this report so that the output is directed to a flat csv-file. Have I understood this one correctly?

We need the employee history only once a year. Handling data transfer with PI sounds
a little bit heavy. (We are not currently using PI, though it is coming soon - a long story...) And if we can't build 100% proof eligibility logic, there might be need to manually manipulate some of the employee history data before it is uploaded to SF VarPay.

(Some background to that eligibility-"logic":

eligibility may depend on how long you have been employed, in which part of the Group you are, have you moved from one part to another, have you left the company, why you left, are you rehired / how many days you were outside of the Group, have you been absent, how long you were absent, what was the reason of absence,...)

Did you have a look at customizing activity Maintain Variable Pay Program Information for defining your eligibility etc? Also, have you checked in SuccessFactors whether it can support your type of eligibility?

The packaged integration only supports SAP PI or SAP HCI - it does not support flat-file output.

Our consultants responsible for implementing Variable Pay told us SuccessFactors don't give support in this case. Those guys are experienced and competent and so far they seem to have known what they are talking about.

At the moment we have version 2.0 of this Integration Add On. So I haven't been able to check that customizing activity. I guess 3.0 (SP02) will be installed, we just have to decide when... If it don't help us in this case, we don't need to hurry.

Your implementation consultants are correct that SuccessFactors don't give support, but they should be raising the ticket with SAP under component PA-SFI-TM.