Being part of one of the teams who had won the SAP Connected Car Contest 2013 has its own privileges. One of them was to get invited to a SAP Workshop in Palo Alto (Aug 3-6, 2014). I was the team leader of my team. Passed the TERP10 certification last May of 2014 and also got invited to be attend the annual SAP SAPPHIRE 2014 in Orlando, Florida. Everything is awesome and I have so many people to thank you for making this happen.

I do apologize that this blog should have been finished and posted by September of 2014. As an international student who cannot afford a vacation is a no fun deal. I had to cancel my backpacking trips and hikes due to sudden important events to attend. Building my SAP career is a priority of mine even if I have to put away my nature loving personality for now. 😥 Unfortunately, a burnout and depression struck me hard through out these past few months that cause me my health but then I still keep myself positive for what good thing yet to come. Well, I have to pull myself together am I right!? So, here is an experience that i would like share some of my experiences at the SAP Workshop. Better late than never. 😛

I may not be able to mention all the important people and cover all of the important details during the SAP workshop. If I would enumerate all of them then this post is better off as a video documentary in Discovery Channel or National Geographic. I made this post as simple, fun and straight forward as possible. Boredom can be lethal and I am sure you have better things to do, so I appreciate for your procrastination to read this blog of mine. 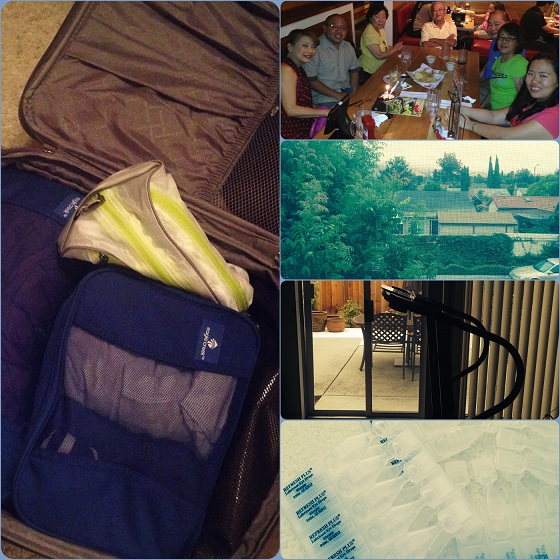 My arrival in California was one day earlier from the itinerary. It was nice of Geoff Ryder (Coordinator) to reserve a shuttle for me when my plane had landed but I should have emailed him before hand as a reminder that I had plans to spend some time with my aunt (and uncle) who picked me up from the airport. I got to enjoy meeting some relatives and friends. I had some time to stare outside of the window, appreciating San Jose view. When I got up the next day, I did some running and before my aunt gave me a ride to Palo Alto, she gave me some lubricant eye drops. Aunt Vivian was right when she said that these could be handy on a given situation that I need to work extended hours in the workshop. 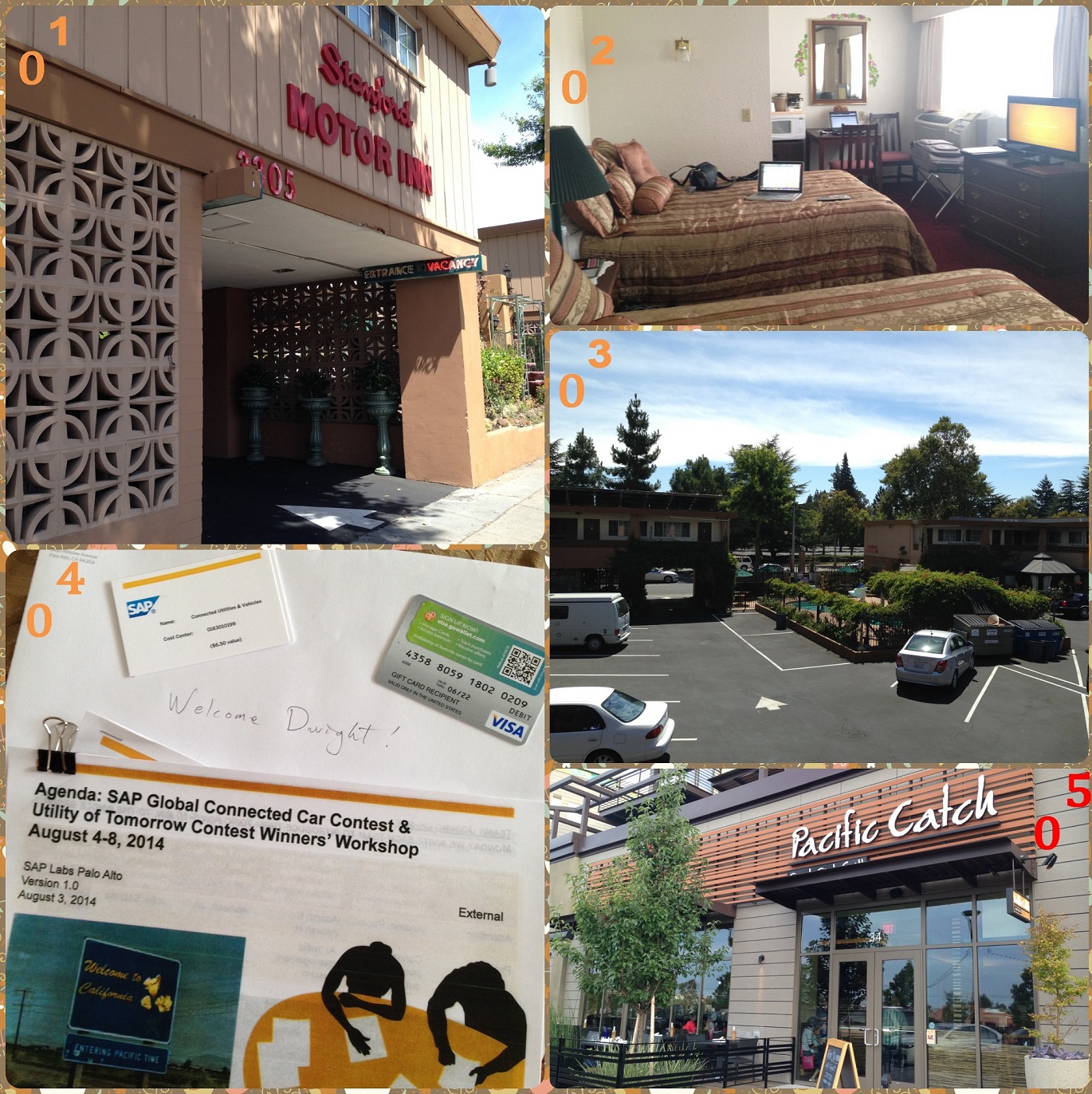 ₀¹I arrived at the hotel earlier than the others. ₀²The place seemed to be a right place to bump in to Jax Teller from Sons of Anarchy. I liked it. It provided a different environment for a change and the only thing that is miss would be a Harley as my ride. Other candidates might have taken this workshop as a vacation but to me it was an opportunity to work with SAP. I travel to learn and to meet people. Other necessities are secondary.

₀³The staffs were nice, I got my card key and asked them to call me when Geoff Ryder arrived at the hotel for a drop by.  After an hour staying in my room, I got a call from the front desk. I hastily left the room and walked towards the reception area. Finally, I got the chance to meet with Geoff in person. While having a chat with him, he handed over my welcome package with lunch vouchers and a cash card for dinner. ₀⁴Before we parted on that day, I helped out labeling the rest of the welcome packages and informed him that I am willingly to provide assistance whenever he is in need of it. ₀⁵My day ended with a dinner with a friend of mine (with her husband and their kid), who I have not seen for 7 years. After I got back at the hotel, I chatted with my teammates, April and Atul before calling it a night.

Day 1: SAP Version of Charlie and the Chocolate Factory (August 4) 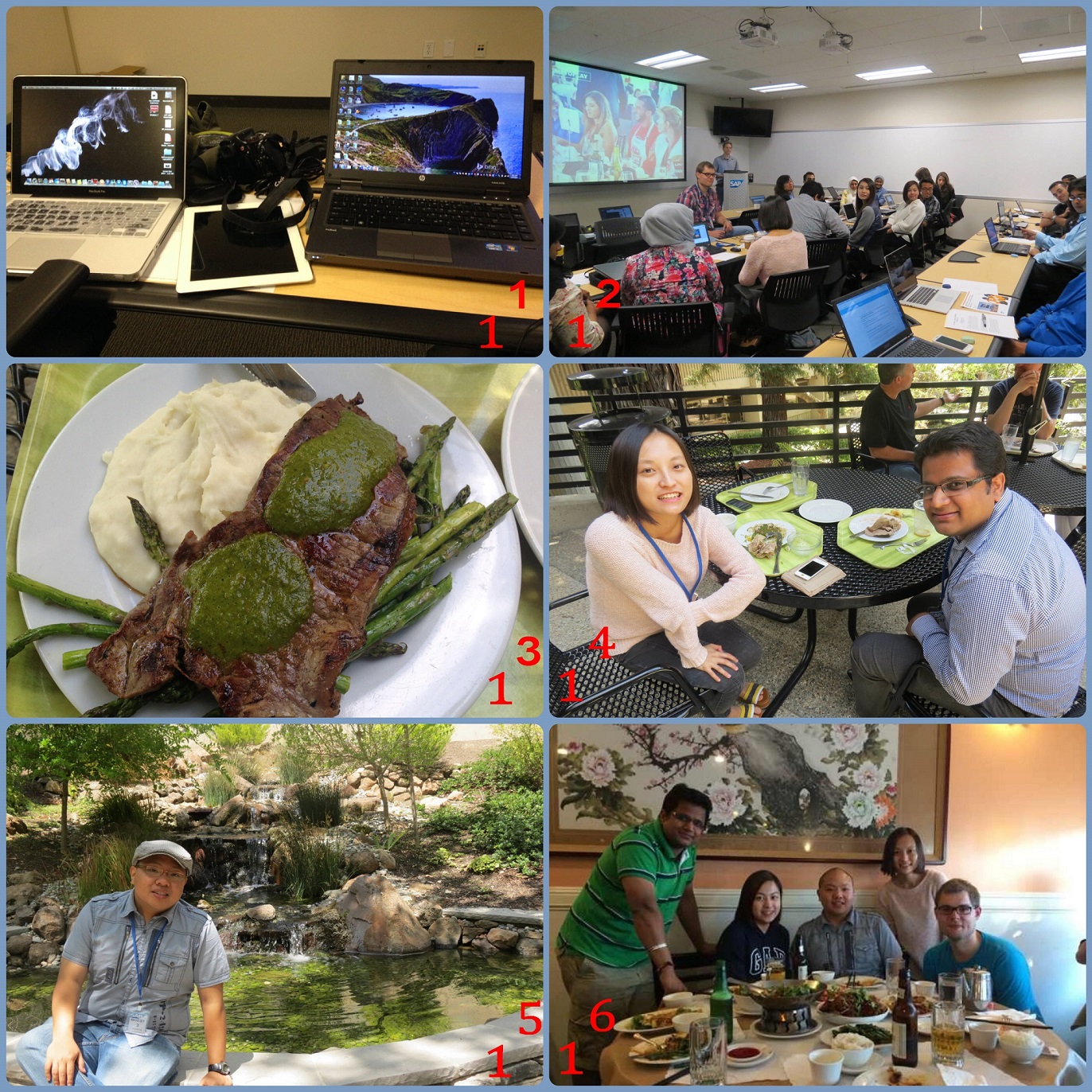 Early morning, Atul and I got up early. We realized that most of the people were still asleep but we managed to meet some of them during breakfast. That includes meeting Janelle Berry who is intriguingly from SAP Vancouver. As a matter of fact she works with Geoff and will be herding us throughout the week. When Geoff arrived, he insisted to give us a ride. We were one of the first batch of students to arrived at SAP HQ. I played it cool and greeted the receptionist with a warm smile but deep inside me, I was overjoyed knowing that I am standing on SAP soil.

₁¹ If I have the power to duplicate myself. I would surely use that ability for this particular week. Attending the workshop during the day while I continue my internship tasks at night was not a good idea at all. Bringing two computers every day was like a 5 day backpacking trip. The agenda on the first two days were all about knowing each team’s proposed application and also listening to a number of companies’ presentation about their APIs. I was so astonished that such business and its technology exist at this very moment.

During lunch we enjoyed our meal and appreciate the garden besides Building 1. For dinner, a number of us went for Chinese food and had the opportunity to bond with other students. By 8pm, I had to run back to the hotel and joined in a meeting for work. 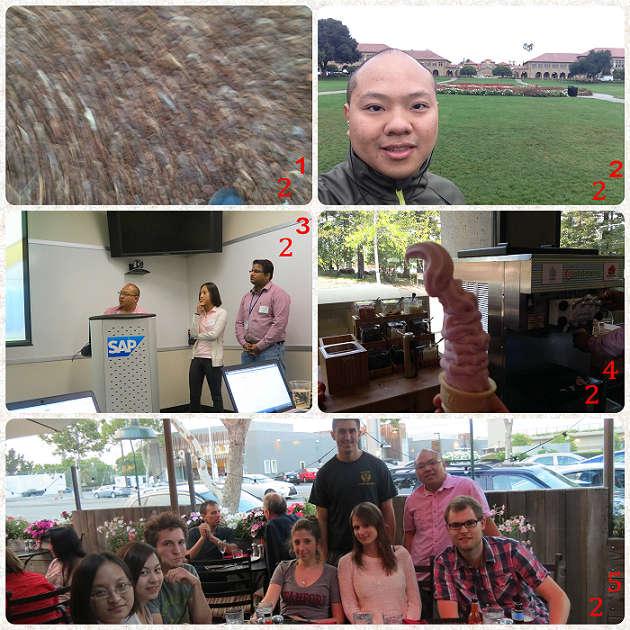 California has such a lovely weather. ₂¹I decided to have a jog at 5:30 in the morning and stopped over at ₂²Stanford University for some pictures. I took my time exploring the campus and once I have arrived back at the hotel, I still have enough time to take a shower before the last shuttle leaves. Since not all of the teams got the chance to introduce their proposal on the first day, we continued that activity and ₂³ my team was the last one to present. ₂⁴During lunch we found out that the cafeteria has free frozen yogurt every Tuesday, Wednesday and Thursday. Oh! Happy day! In the afternoon, we headed to Building 4 and attended more API presentations.

After the day had ended, ₂⁶we invited more people and headed to the Fish Market Seafood restaurant for dinner. We had some laughs and discussions. Most of them were curious on what SAP consulting is all about, since I have mentioned that I am SAP Certified and I want to be a SAP consultant in the future. One of the questions I asked them was, “What are their plans after finishing school?” and to my surprise, none of them could answer me straight. It seems that they have not thought of this through yet and generally they don’t have any plans at all. Then I simply told them that, “A plan is better than no plan at all”. I hope they would consider my advice and define their dream regardless knowing that finding a job is challenging. 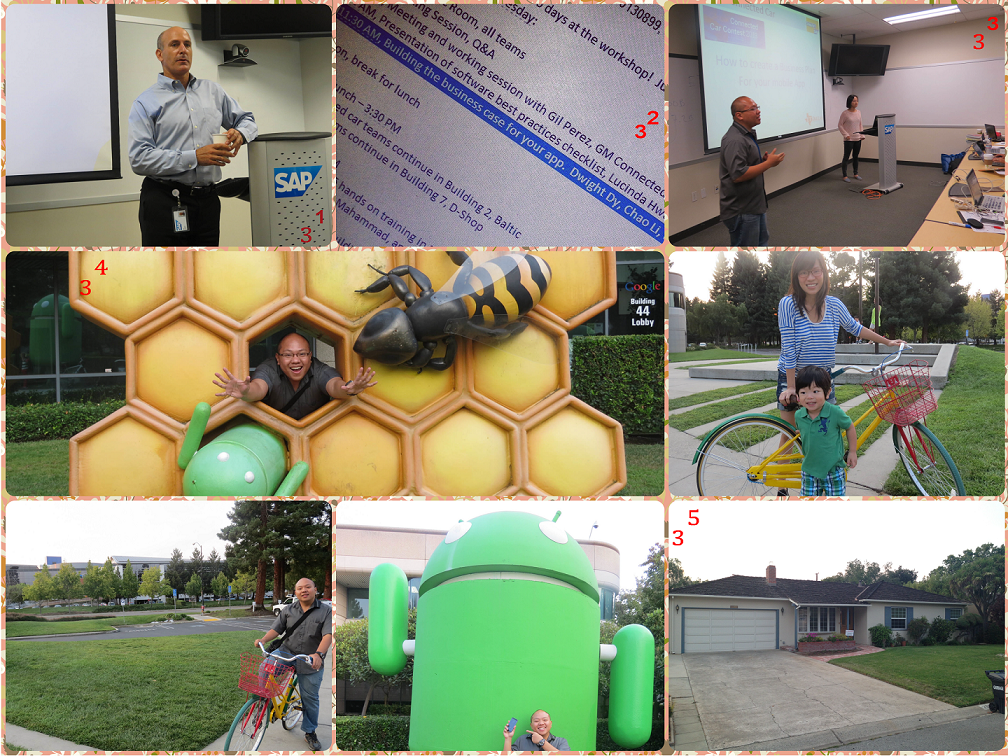 Theentire morning was all about Business 101. ₃¹Gil Perez discussed the purpose of the competition and the workshop. He gave some interesting realization about using data while driving. An example was that the ETA (estimate Time of Arrival) should be equivalent to ETD (Estimate Time to Drive) + ETP (Estimated Time to Park) which actually make sense to me! Second lecture was about “Prototype to Production”, by Lucinda Huang. Explaining the best practice of software development and the list of legal procedures to be followed. The last lecture for the morning was ₃²“How to Create a Business Plan for your Mobile App”, ₃³presented by us, the student of The University of Texas at Dallas. Since most of the students were developers and taking engineering majors, Geoff invited us to demonstrate one of the important factors of getting sponsors for your project. Mainly how to make a Financial Analysis. I started off with an introduction and let April take the lead on the financials. Then, ended the presentation by sharing the Project Management (Golden) Triangle: Cost, Scope and Time.

During lunch I had a chat with Prof. Leigh Jin about TERP10. She is a awesome person, we discussed about her plans on starting a TERP10 training certification at SFSU. In the afternoon we had some brainstorming on the team’s final presentation for Friday and by ending the workshop for the day, we had some lectures about SAP’s Open IU5 (HTML5). Then, I am off with dearest friend with her cute kid once again. Enjoyed walking around Downtown – Palo Alto. I had my first ever Cheesecake Factory experience, visited ₃⁴Google and ₃⁵stopped by at my hero’s home where he built Apple. This particular day was different. There were no lectures and no activities. The only focus was to finish up our video presentation for our last day of workshop.  I had it all planned ahead that we had some time ₄²to mess around and ₄¹it was about time to walk around parts of the Campus to take some memorable photos.

After lunch, we did some shooting outside the campus for our video presentation. When we got back, we visited one of the ₄³SAP labs and ₄⁴it was the place where I was able to start my video editing while Atul and April shot the rest of the parts I needed for the presentation. ₅¹I finished up my video around 2 AM back in our hotel room but then I decided to do a blooper video just for fun. This is where those eye drops were useful. While everyone’s is fast asleep, I made sure that my team do not have to experience cramming in the morning. I only had around 3 hours of sleep but I was excited for our last day in SAP.

In the morning my team was able to relax while others were still finalizing their videos. Since I have been using iMovie for quite a while, I was able to helped out some teams for tips and tricks on how to use it. ₅²During the presentations, I also helped out Geoff and Janelle with the MacBooks we were using since it had problems showing up on the projector screen. After the event have ended, ₅³we had our group pictures taken outside of Building 2. We had our last lunch together and got some ₅⁴SAP souvenirs that I promised myself never to use/open them. We said farewell to each other and exchanged contact information. While sitting in the car, ₅⁵I took a my last glance at the building and hope that moment was not my last goodbye. Back in the hotel, ₅⁶I realized that I had complete forgotten to return my SAP badge. I was thinking about keeping it but I decided to give it back since it is the thing to do. Geoff stopped over at the hotel, I gave my badge to him and had a short conversation one more time before we parted ways.

I kept wondering what is need for me. I am graduating in December of 2014 but will I be able to experience these awesome events again? Maybe not but maybe something better. There are still ASUG events to attend (image below) and still a lot of SAP Modules to learn. Too early for me to thrown in the towel since my SAP journey have just begun. 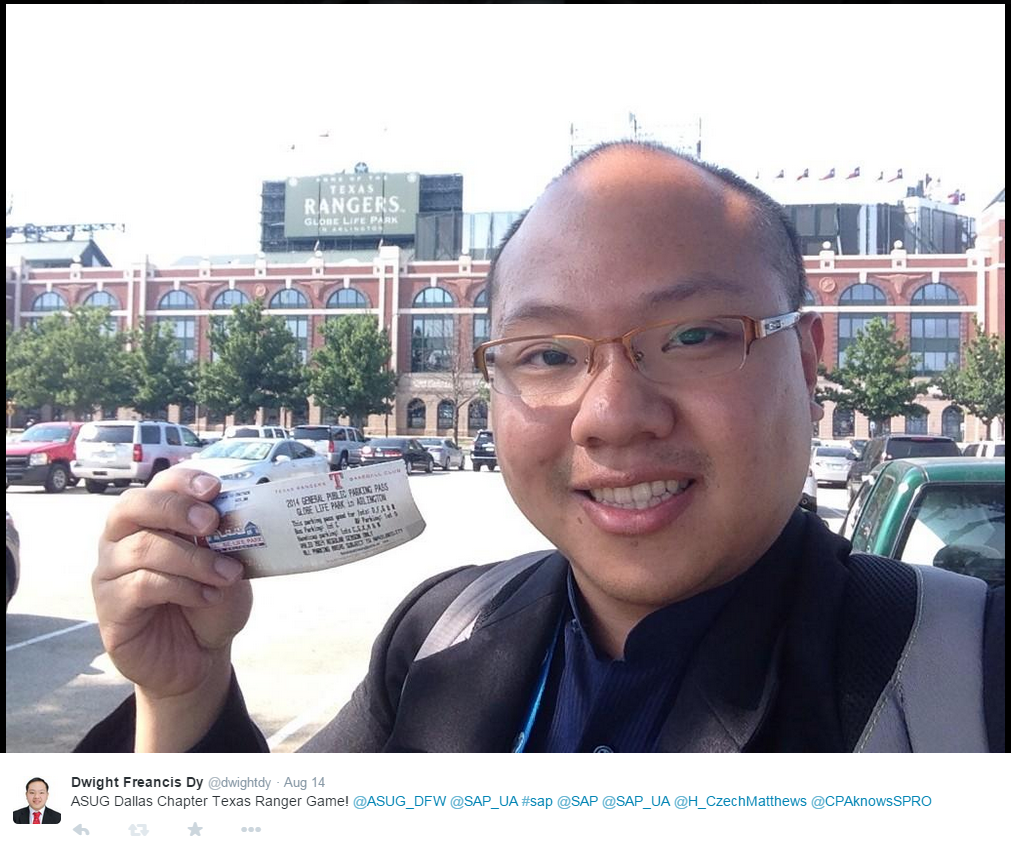 – The University of Texas at Dallas