SAP Identity Management 8.0 – the new major version of the product was just released and now is available for download on the SAP Service Marketplace.

As can be expected of a new major release – the product contains many enhancements along with some key new features.

Starting with the IdM Designtime –  IdM Developers can now benefit from a completely new development environment based on Eclipse – the new IdM Development Studio.  Going further – in the new version IdM continues to extend its integration capabilities with SAP products introducing a SuccessFactors connector (SFSF connector). I should also mention here improvements like  the new security concept and new process editor, as well as some renovations in repository and dispatcher management.

Of all the new features above in this blog I would like to focus on an overview of the SuccessFactors connector. We will take  a look at the two business scenarios that are supported as well as go into some more details about the new packaging concept and how the SFSF

connector is delivered as part of the SAP Provisioning Framework.

On one side – like any HCM system, Employee Central is the leading system of record for employee data.  On the other side – SAP Identity Management is the leading system of record about identities, their data and privileges. So far in version 7.2 SAP IdM offered identity management processes around the on-premise SAP HCM solution. In IdM 8.0 we provide similar processes for Employee Central.  With the SuccessFactors connector we cover two main scenarios:

In  the first scenario  SFSF EC is a central employee system and we have enabled identity propagation to be initiated from SuccessFactors. (Figure 1). For this we have implemented a pull mechanism in delta mode via scheduled Initial / Delta Load Job.

The other scenario that is targeted is the one where we have IdM as a Central system that initiates identity propagation. Here SAP IdM uses the SuccessFactors role-based permission concept and is used to assign users to roles and groups in SuccessFactor in a similar way like for any other system in the landscape (Figure 2). This way customers of SAP IdM are able to extend their SAP IdM deployment with SuccessFactors. This scenario could be used regardless of whether SFSF Employee Central is the leading HCM system or not.

The SuccessFactors  connector is shipped as a separate package in SAP Identity Management 8.0’s Provisioning Framework. Introducing the new packaging concept in IdM 8.0 (for more details you can check what Fedya posted here) now you can consume it via importing the package that is called com.sap.idm.connector.sfsf – com.sap.idm.connector.sfsf.idmpck.

As you can see on Figure 3 the connector consists of the following components:

To configure the SuccessFactors connector, you have to create a repository and run an Initial Load job.

For more information and details about the configuration you can take a look at the new extended Configuration Guide that we have prepared for IdM 8.0. 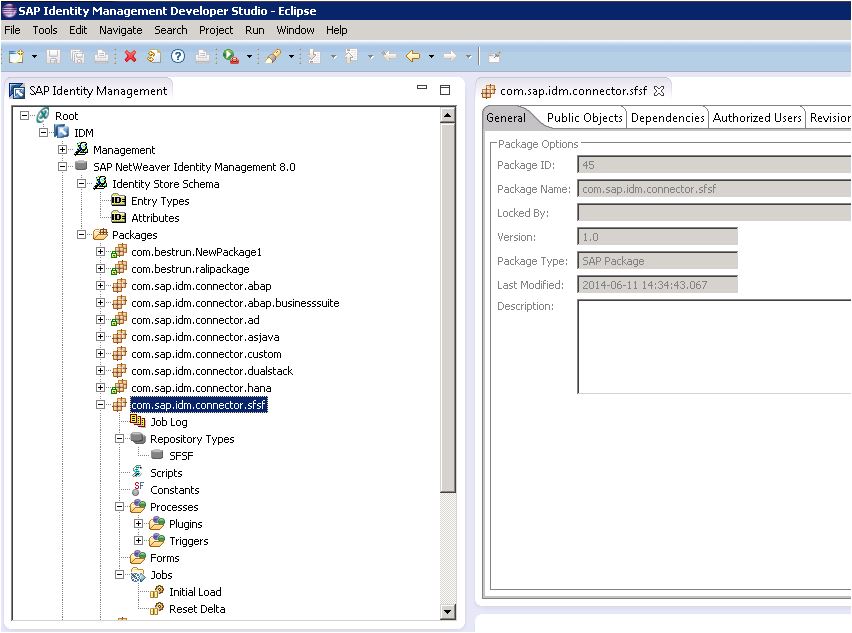 Looking good, can't wait for GA on the product!

One question that I've been getting from people regarding SF:  What support is there for checking training status, which is what many clients here in North America are using SF for.

Yes, we know about this requirement and we have also considered this as part of the SuccessFactors connector that is part of IdM 8.0.
Unfortunately, in SP0 we did not manage to add it in the product but still - it is expected as part of next SP delivery.

Great news Ralitsa! Are there any plans to develop a similar connector for SAP IdM 7.2?

Down porting to 7.2 would get my vote too!

I don't know that this would work since I think they are planning on bridging the SAP Cloud Identity Service for this.

I'd say the workaround is to do flat file / database ports to and from SF. (I have not had any chance to even think about how this would happen yet.)

Sounds great. And also gives hope for a similar Connector with Concur in the not too distant future.

We have on our agenda to research and check feasibility and viability of a Concur connector.

Do you have a case?

No specific case yet.

Just started to talk to customers who want to move and if they have IDM, an integration for Concur would definitely be high on their agenda.

Apologies if I'm a little late to the party, taking into Matt Pollicove's solution above is there a 3rd party SuccessFactor connector for SAP IdM 7.2?

I'm not aware of any third party SuccessFactors Connector for SAP IdM 7.2.

Would you be able to confirm if this new connector will also enable the management of access in SuccessFactors LMS since the LMS is essentially a separate system from BizX ?

We are considering integration with SuccessFactors LMS as next enhancements of the connector.
I think it would be a very good idea to discuss with you the use cases that you have.

Very well explained in such a short article.