SAP SCM F&R  system deals with very high volume of master and transaction data due to the nature of business in Retail sector and no of stores and SKUs involved in planning process. Due to the huge volume of data, interface between F&R and ECC is designed differently as compared to Core Interface (used between APO and ECC). Data interchange between F&R and ECC takes place through the interface named as “Buffer Interface”. This paper attempts to capture the technical architecture of buffer interface and discuss the consistency reports that need to be executed periodically to keep both the systems in sync and ensure higher level of accuracy of the planning results generated from the FRP run.

SAP Forecasting and Replenishment (SAP F&R) is a Retail specific application out of the SAP for Retail portfolio. A standard integration into Retail’s powerful back office system comes as part of the solution and massive amounts of data are being transferred almost on a daily basis. The challenge to feed SAP F&R with large amounts of master data and master data changes as well as transactional information via a set of highly of complex interfaces requires tools and monitors in order to ensure data consistency at all times in all areas as early as possible.

Data inconsistencies will negatively impact the results in all subsequent F&R processes such as forecast calculation by using for instance incorrect information on sources of supply, minimum stock, procurement cycles, listing intervals and eventually end up in critical stock-out or stock-over situations.

Manual checks and controls are not an option in high-volume Retail businesses so a set of check reports and monitoring tools is available to compare master data on both sides – ERP and SAP F&R – and display any inconsistency to allow early intervention and prevent damage in the follow-on processes.

This business process description will describe only the most important steps that are necessary to operate an SAP F&R solution. Individual SAP F&R implementations of customers are not considered. Therefore, it can be that individual critical steps are not described, or that some steps in this description are not relevant for specific customers. 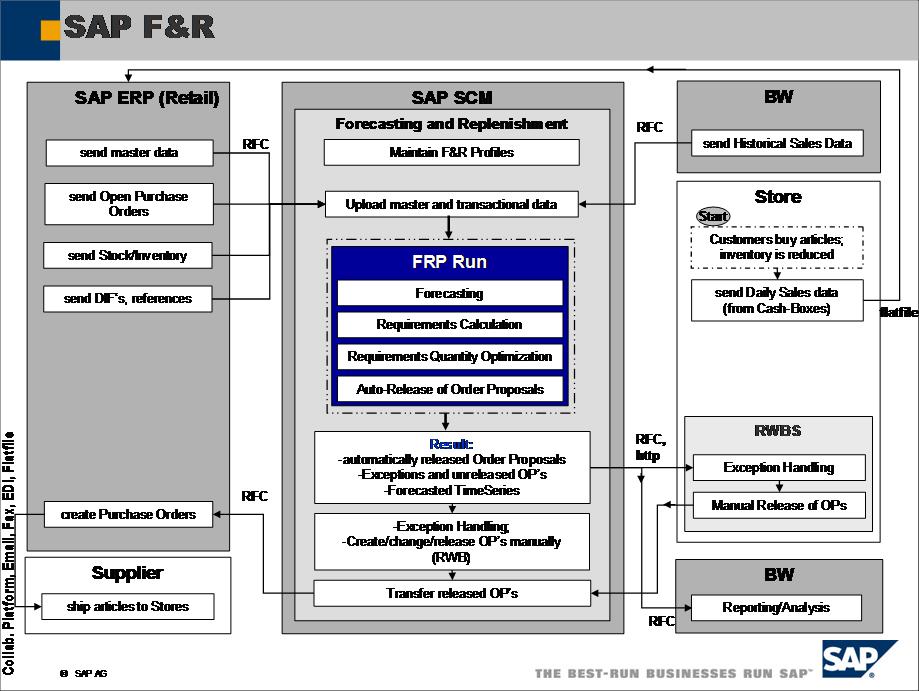 For master data of new SAP F&R relevant article/site combinations there is an initial load (report FRE_INIT_LOAD, transaction FRE01) first from SAP ERP Retail to SAP F&R. This report is supposed to be started once for the initial data supply of SAP F&R. Then, the delta load (report FRE_DELTA_LOAD, transaction FRE02) for change pointers due to master data changes by planners is executed daily.

Buffer interface is the interface through which the master and transaction data get transferred from ECC to F&R and vice-versa through RFC. Unlike Core Interface (CIF) used in SAP APO, Buffer Interface (BIF) is asynchronous and is designed to handle high volume of data involved in retail planning process.

Technical architecture of the buffer interface is as shown below:

In Buffer Interface, data gets pushed from ECC to buffer tables in the interface and from the buffer tables, booking job transfers the data to F&R. Order proposals created by F&R are transferred to ECC using a SAP standard program. Data between the two systems are in sync only at a point of time and any changes in ECC are not automatically reflected into F&R until the consistency programs are executed through the buffer interface.

SAP provides the following reports to maintain consistency between ECC and F&R systems.  These reports are executed in SAP ERP system.

In a following step, the collected master data values from SAP ERP Retail and SAP F&R are compared.

Detected inconsistencies can be cleaned up executing the report FRE_REINIT_LOAD in ECC followed by the execution of the report /FRE/BIF_INB01 in F&R to post the entries from buffer table to F&R database.

Depending on the SAP F&R release, the supply network consists of different tables. The report considers if the old lanes model or the new lanes model is active (table FRE_SEND_OPTION, field FRE_NEW_LANES).

In a first step on the SAP ERP Retail side, the relevant article/site combinations that exist in FRE_DB_ART_SITE are selected according to the selected article and site.

Detected inconsistencies can be cleaned up executing the report FRE_REINIT_LOAD followed by the execution of report /FRE/BIF_INB01 in F&R to post entries from buffer table to F&R database.

Detected inconsistencies can be cleaned up executing report FRE_ORD_START_OUTB_INTVL in ECC for inconsistent purchase orders. Afterwards, in F&R, run report /FRE/BIF_INB01 to post the entries from buffer table to F&R database.

This section describes the consistency reports those can be executed in SAP SCM F&R system.

Consumption data stored on weekly and daily basis can be compared. In case the report detects inconsistencies it will be displayed by naming the system with the data inconsistency and also the period (time bucket).

In a first step in SAP F&R the location products to be checked in SAP ERP are selected and then depending on the selection criteria table MSEG or MVER will be accessed via remote function call in order to perform the check.

Detected inconsistencies can be cleaned up for the data source in ERP by executing the report FRE_SEND_TSD (T Code – FRE03). This report transfers the consumption data to F&R buffer table /FRE/BIF_TSD.

A state in which the consumptions of both systems can be compared can only be reached once the interface processing in both involved systems has successfully finished. This means in SAP ERP the Report interface “FRE_SEND_TSD” (transaction FRE03 – transfer of stock and consumption data) was executed and no changes to the stock have occurred since then. In SAP F&R the report “/FRE/BIF_INB01” (inbound processing of stock data) was executed and has finished successfully.

Report /FRE/BIF_CHECK_STOCK generate the list of inconsistencies between ERP and F&R which needs to be corrected using SAP ERP time series interface for stock information. To remove inconsistencies, use report FRE_SEND_TSD in ECC. This report transfers the consumption data to F&R buffer table /FRE/BIF_TSD. Subsequently, execute report /FRE/BIF_INB01 in F&R.

Data inconsistencies play a crucial role in F&R landscape. Unlike CIF in APO, where the transaction data are transferred from ECC to APO in real-time, buffer interface in F&R is asynchronous. Any synchronization between ECC and F&R is an on-going maintenance activity and needs to be ensured before every FRP run.

Presence of buffer interface (BIF) facilitates the handling of high volume of data, but poses challenge of asynchronous data transfer unlike CIF.  BIF can handle huge volume of data whereas CIF is designed for only critical data relevant for advanced planning in APO. Managing integration in CIF is easier due to one time configuration and activation of integration models, following which transaction data flows in real-time and master data needs to be synchronized less frequently after initial transfer. Managing integration using BIF is challenging due to asynchronous mode of data transfer through buffer tables.

While planning the data management strategy, planners must consider the performance issues due to data volume and schedule of the jobs to generate inconsistencies and their manual cleanup.

Pravat Dash, CPIM is a Managing Consultant in the Business Consulting Services Group of IBM Global Services. He has over 16 years of SAP SCM/ERP implementation and industry experience in the area of Supply Chain Management and Logistics. He has worked as Lead Consultant and APO Team Lead for implementing SAP SCM solutions for clients in various industry verticals for the past 12 years. He has authored multiple papers in Supply Chain Planning space. You may reach him via email prabhatdash2003@yahoo.co.in.