This was an SAP webcast given last week. Unfortunately the link to the slides is now broken on the SAP Support portal so the link is now removed.

SAP will have feature packages with new functionality to the customer

The customer chooses which features to implement 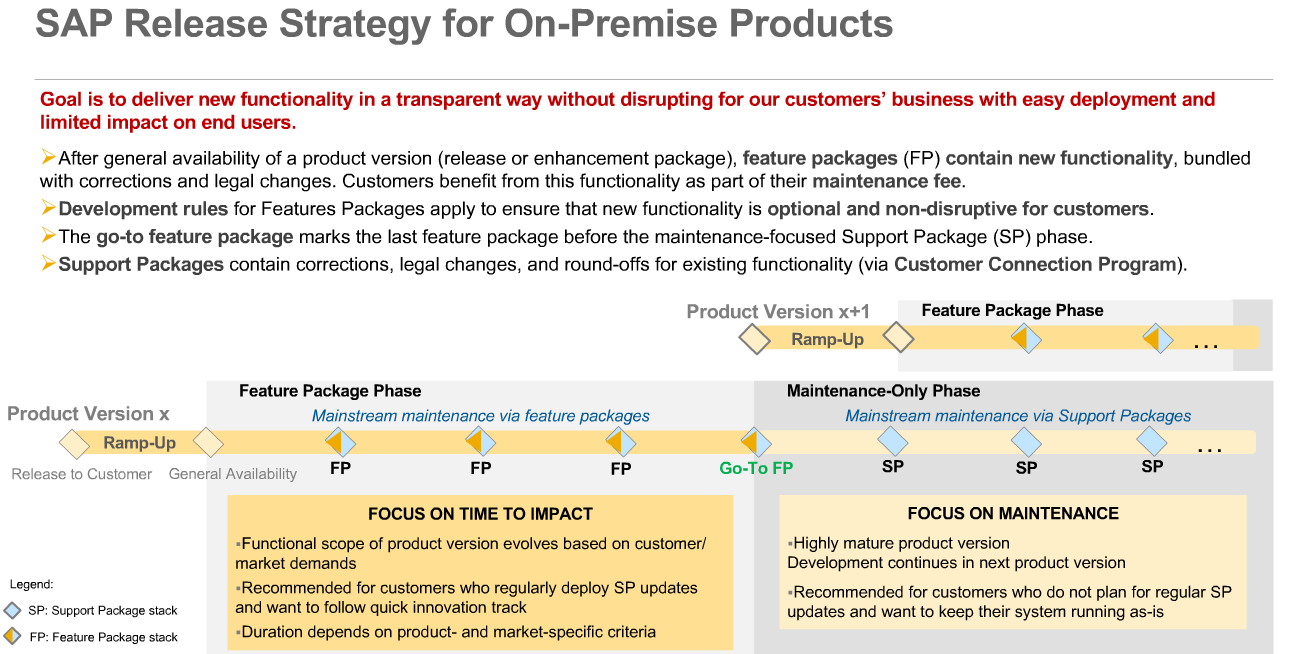 Feature package phase, normal correction and changes, see new functionality which is bundled in feature packages which use the support package technology

There are no new tools required to handle

There is no additional charge for feature packs

Focus is “on time to market” 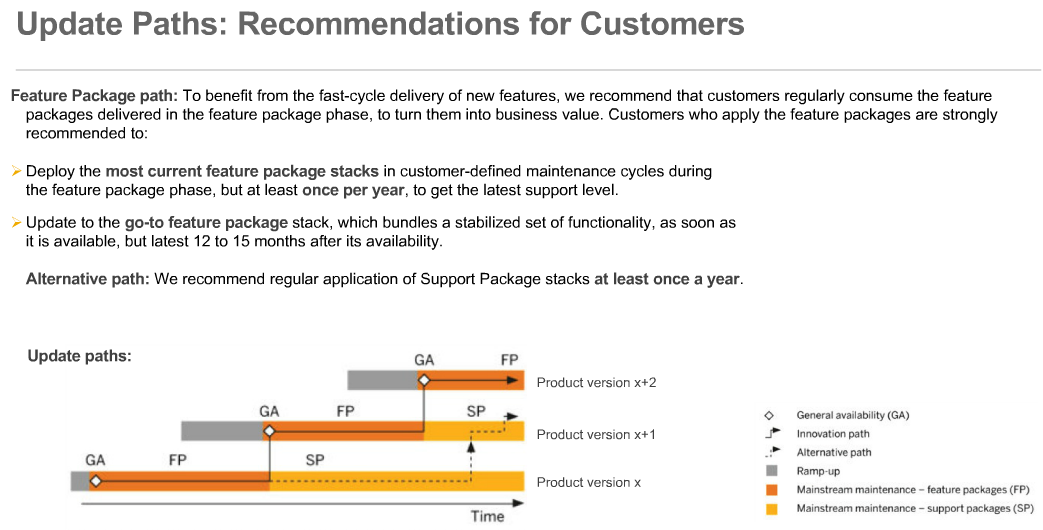 Latest SP should be implemented 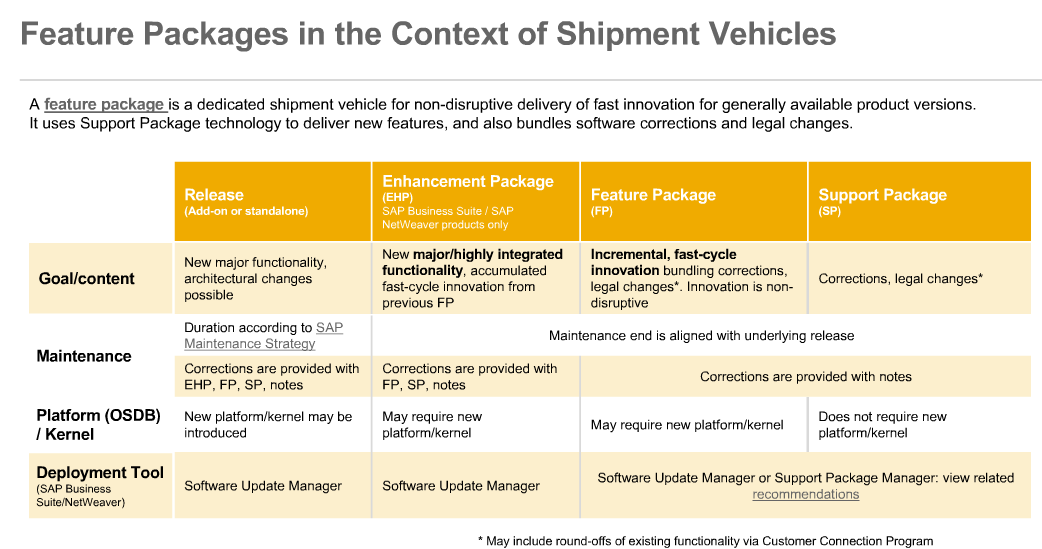 Figure 4 shows the different types of packages with respect to impact to platform, kernel changes

Corrections are provided via notes 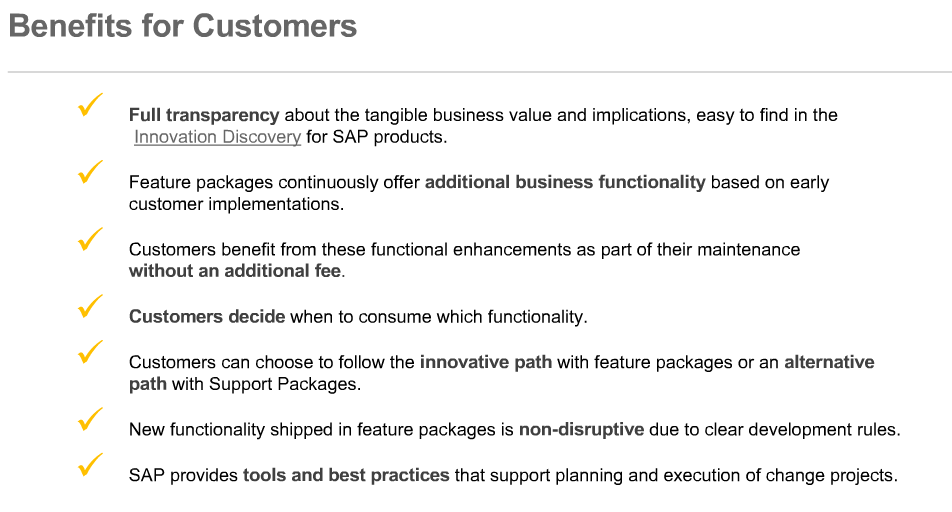 Question: How are feature packs different from today’s enhancement packs, which, to be honest, aren’t easily “consumed”

Here is a direct link to a description of the Feature Packages: https://support.sap.com/release-upgrade-maintenance/release-strategy/release/on-premise/maintenance-phases.html

You can also find a definition of “Feature Packages”  using the following link: https://support.sap.com/release-upgrade-maintenance/release-strategy/glossary.html#f

Hi, Tammy the ppt's link  is broken, could you check for me? I am interested in this subject, if you prefer to send for email, my email is alex.maarin@gmail.com.

Hi Alex - unfortunately I don't have the link any more and now it appears to be broken on the SAP Support portal.

If I find it I will update the blog.

Please note you are not include your e-mail address on SCN except in the profile per the SCN rules of engagement.

I will wait the blog's update. Thanks for you attention.

Thanks for a nice blog. The information is really helpful even more than two year after you published this blog. I have couple of questions and it would be really helpful if you could help me with the answers 🙂

I assume that with every S/4 yearly release SAP with supply three Feature Packs; FPS01, FPS02, FPS03 and then SPS04, SPS05 onwards as per the Maintenance Strategy Rules (https://support.sap.com/release-upgrade-maintenance/release-strategy/release/on-premise/rules.html).

I understand that SAP controls/decides if there will be three feature packs required after the yearly release or not and same is the case for service packs. Also the conversion path shall be made available by SAP before we can try an upgrade from one version to other (Example SAP S/4 HANA 1511 to 1610 etc.).

Question 1 - Once I am live with S/4 HANA 1610 FPS01, Can I apply the SPS packs released later even when I do not apply subsequent feature packs? Example: I choose to directly apply SPS04?

Question 2 - What if we decide to upgrade at alater point from SAP S/4 HANA 1610 FPS01 to FPS02, Do you think that this will need an effort equivalent to system conversion in terms of testing the existing solution? or that can be just considered as technical upgrade with no functional effort?

Question 4 - Customers are always confused if they should move to S/4 now or wait for the next release to see what new functionalities SAP will offer. So, Should we assume that once the first SPS is released for the respective product version (example 1511), the product is stable?

Hi Amit - thank you for reading

First this blog is 3 years old; I am not sure if/how they apply to S/4HANA; perhaps ask these as questions at answers.sap.com under the HANA tags?  I am not sure how SAP has changed this since 2014.