A recap of the the #SITnl

Last year Ronald and myself attended the SAP internal event for the first time. We enjoyed the atmosphere and the people so much, that we made a resolution that we would not only attend this year, we wanted to add to it by creating a SITNL BI track.

Often these intentions tend to be forgotten, but luckily Ronald joined the organization and I did a talk and had a wonderful  day in ‘s Hertogenbosch (yes German people were forced to pronounce this town!) 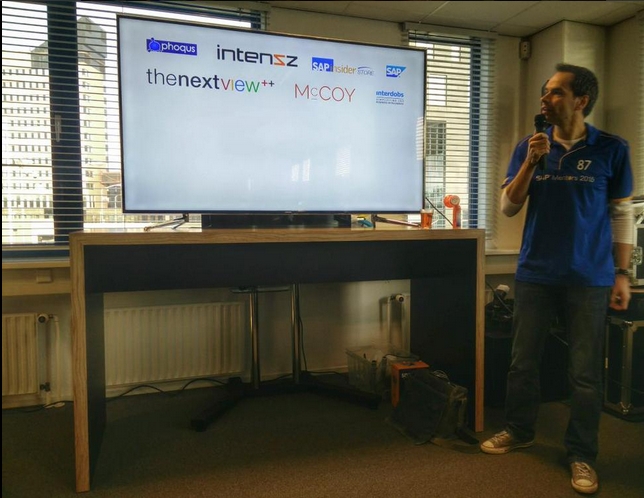 The inside track started at 10.00 (ish) with a keynote by Twan van der Broek, he showed in the keynote by numbers how the inside track is growing now in its 6th year. The number of attendees, presenters and so on . Also by using number plates to showed that people were not just coming from the Netherlands, but additionally from Germany, Belgium, and Italy.

In good fun he described how they had to improvise some things as the building was being refurnished and in some rooms just weren’t ready yet. Additionally a speaker came in that morning and for his talk about internet of things the first thing he needed was….. a screwdriver!

The first thing I have to admit is that I stuck firmly with the BI track this year. Afterwards I thought that I could have done with  at least one technical track, but at the time I was just mesmerized with the offering on the BI track. Additionally I was a bit nervous for my own talk. For next year my resolution is to at least watch one technical talk.

The BI track had a consisted of  A full Data warehousing solution running on the HANA Cloud Platform by BIRST, An look at Tableau software by Norbert Maijoor, then  deep dive into the latest and greatest when architecting and modelling the SAP EDW by Ulrich Christ.

After the lunch break I could show what Data visualization was all about and show them how it’s done. Finally Ronald Konijnenburg and Sven van Leuken would give a recap of the Teched && Dcode in Berlin. 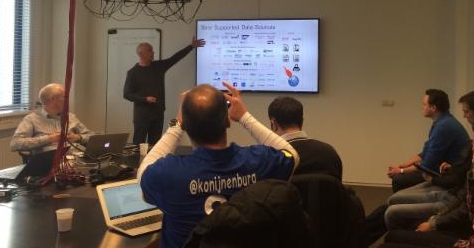 The guys from Birst showed their BI solution on HANA. They showed how they were able to generate a data model on top of existing tables and had a full range of BI products to visualize the data. I was surprised by the number of clients they had (10.000+ ). Some of you may already have seen them in the keynote on the teched (https://www.youtube.com/watch?v=-NOtUChDt_o&feature=youtu.be’)

After an introduction they had quite an extensive demo to show off their product.

A look into Tableau software 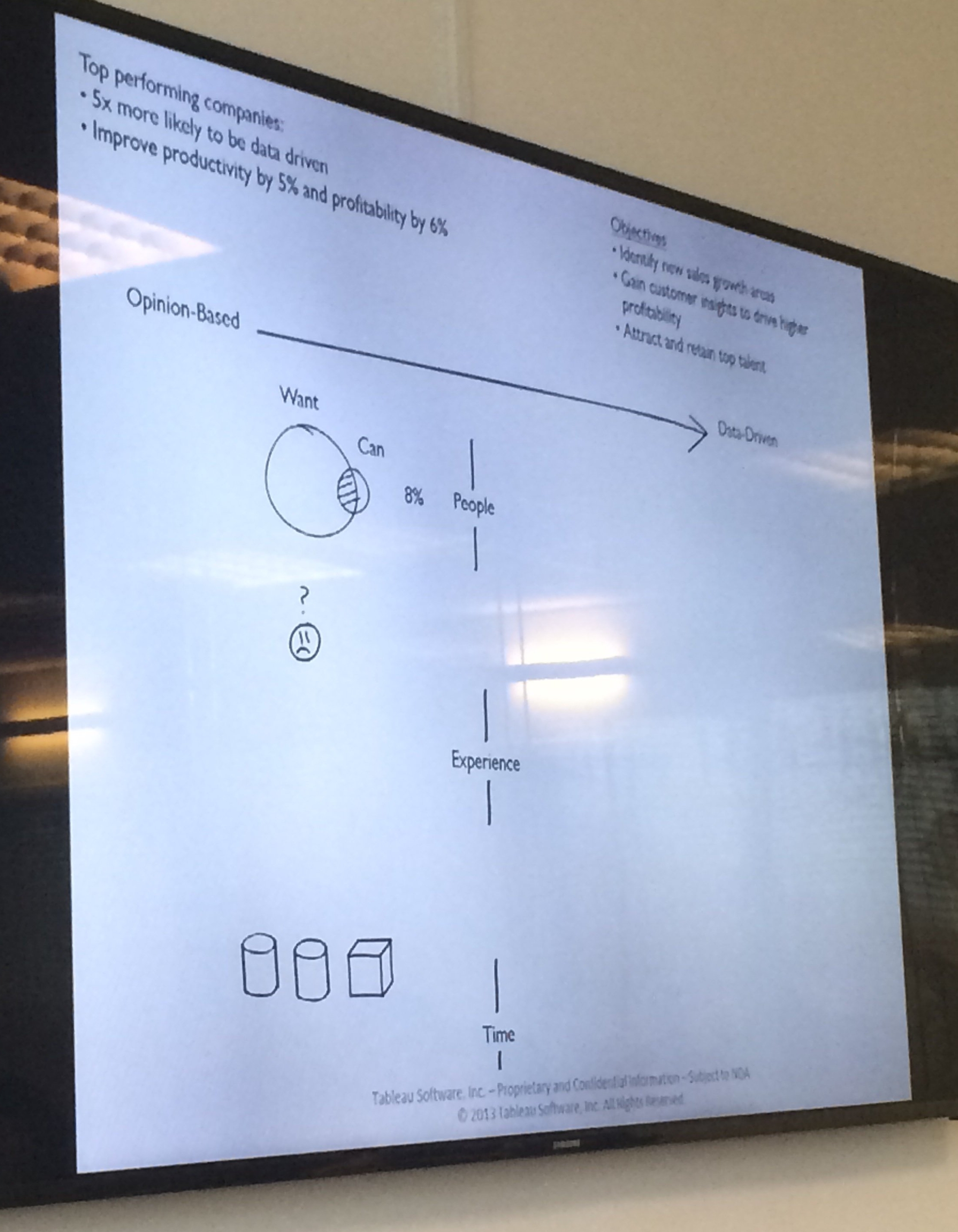 In this presentation Norbert took is through the slides on the subject of data driven versus opinion driven decisions. What the problems are with standard software developments and how users tend to search their own solutions when they´re not happy with the report factory.

Norbert additionally showed it the intuitive way you can explore data in the software. In the demo he showed how he down drilled to show the sales by country. That was still fairly standard, but the fast drag action to add the profitability to the chart by color was really nice. A quick drag that immediately added a well-defined coloring of the bars to easily identify the profitable and not so profitable states.

This talk was by Ulrich Christ, many of you probably have already seen him on the open.sap.com course on SAP BW on HANA, those of you who didn´t… Go look, it is a great serie of videos where you can see how fast SAP BW is going and what the new possibilities are. 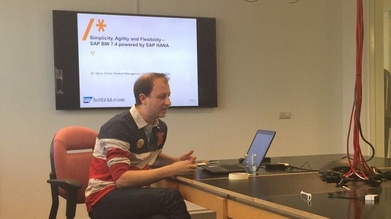 In this session Ulrich went over the various layers in BW and how the new objects simplify modelling. The main objects are the Open ODS view, where you can create a virtual object that shows the contents of an external table. The Advanced DSO that is now the main object for persistent data. By setting options this object can behave in different ways to fit the way you want to model.

The flexibility increases a lot. Now you can just add fields to DSO’s without the need to create info objects. In the demo Ulrich showed with a couple of clicks that he was able to create 10-15 new fields in seconds. Old-school BW guys were moved to tears as this minute would take hours previously as each field needed an info object before you could model.

My turn – on custom datavisualizations 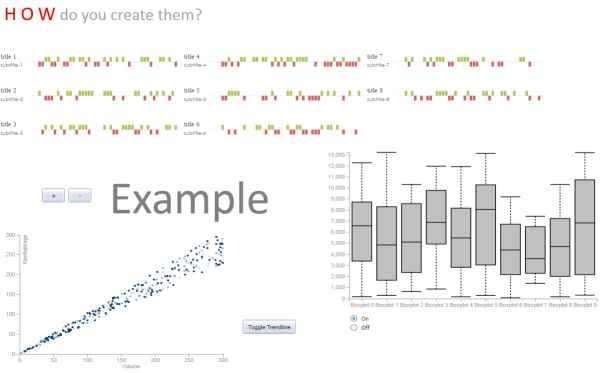 In my talk I went into the fine art of creating your own data visualizatinos. The presentation was divided in three parts: What, Why and How. In the first and second part I explained why it is important to carefully design data visualizations

After the What and Why the difficult part came up. Diving deep into javascript, SDK and D3 to show how you can use this.  That part was bit heavy on the BI guy. But the more programming kind of guys seemed to enjoy it J

And last but not least the

Recap of Berlin by Ronald and Sven van Leuken

In this fun session they went over all the things that they saw in Berlin. On Backend, data provisionin  (which turned out to be a challenging subject as Ulrich Christ was in the audience. All was in good fun and it was nice to have an expert in the room filling in the blanks), analytics predictive and development.

A lot of subjects that took a double session to go through. A special mention to the critical view on the product portfolio regarding predictive as these products seems to have a lot of overlap.

As thanks for the talks we got a nice bottle of wine. This was the conclusion of the official part, but nice things were still to come.

Sven van Leuken took up his role as quizmaster again and took us to the test by asking YES or NO questions which we had to respond by walking to the right area. These questions were fun and by no means easy (is Islamabad the only capital starting with an I?) All good fun and the winners of the rounds all got their well-deserved prizes.

The day was concluded with a great diner by Mrs.Haseenah Penninkhof.

As it was last year it was just too good. Very spicy and it forced me to eat too much as I just could not resist the temptation for a second helping.

Finally A thanks to the Organizers. Again they were able to create a great event with good talks and a great atmosphere where everybody was enjoying themselves.

It was a great event indeed, thx for the recap!

Thanks for a detailed BI track recap Jeroen.

For those interested a total event recap can be found over here: Relive the 6th #sitNL