A personal Review of sitNL 2014

This year I finally managed to attend the SAP Inside Track Netherlands (SAP Inside Track 2014 Netherlands — #sitNL). From the list of attendees and the agenda (Agenda #sitNL 2014) I already had really high expectations for the event. After the event I have to say that #sitNL by far exceeded my expectation. In this blog I’ll try to sum up the interesting things I learned. I would also like to convey the spirit and the fun of the event but I’m afraid my writing skills are not up to this challenge.

According to Twan van den Broeks key note 87 people attended sitNL 2014. Which, by some funny coincidence, is also the number on Twans SAP mentors shirt. 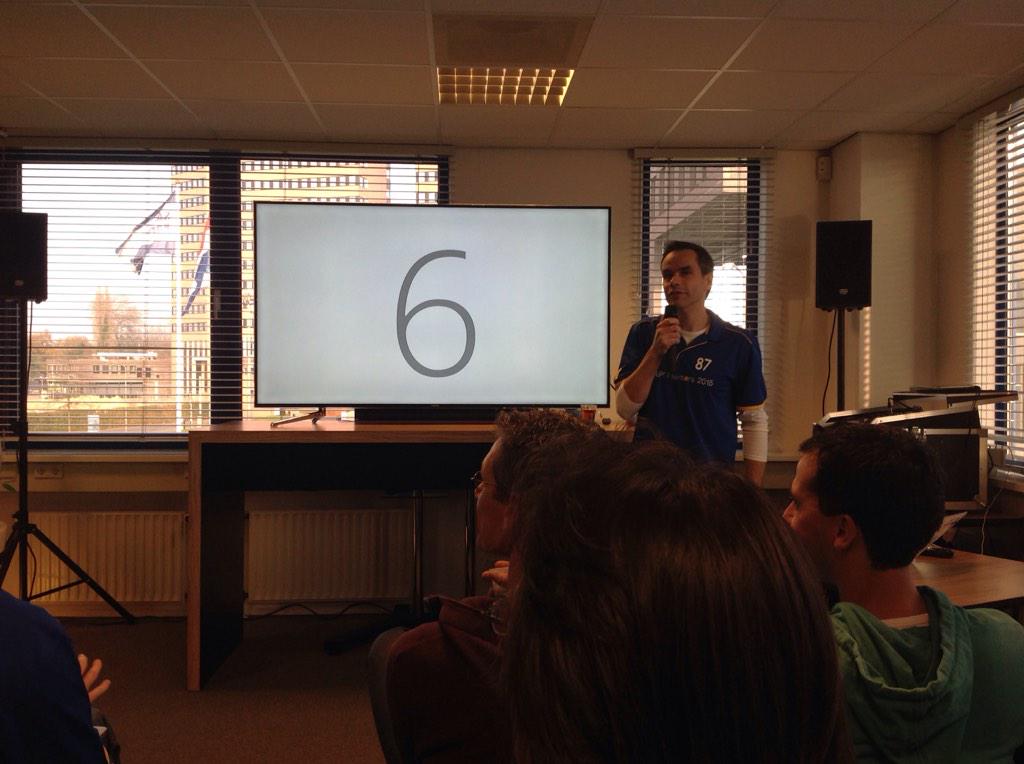 Speaking of SAP mentors; I was really impressed by the number of SAP mentors present. Sometimes, it even seemed that every participant was one of them. 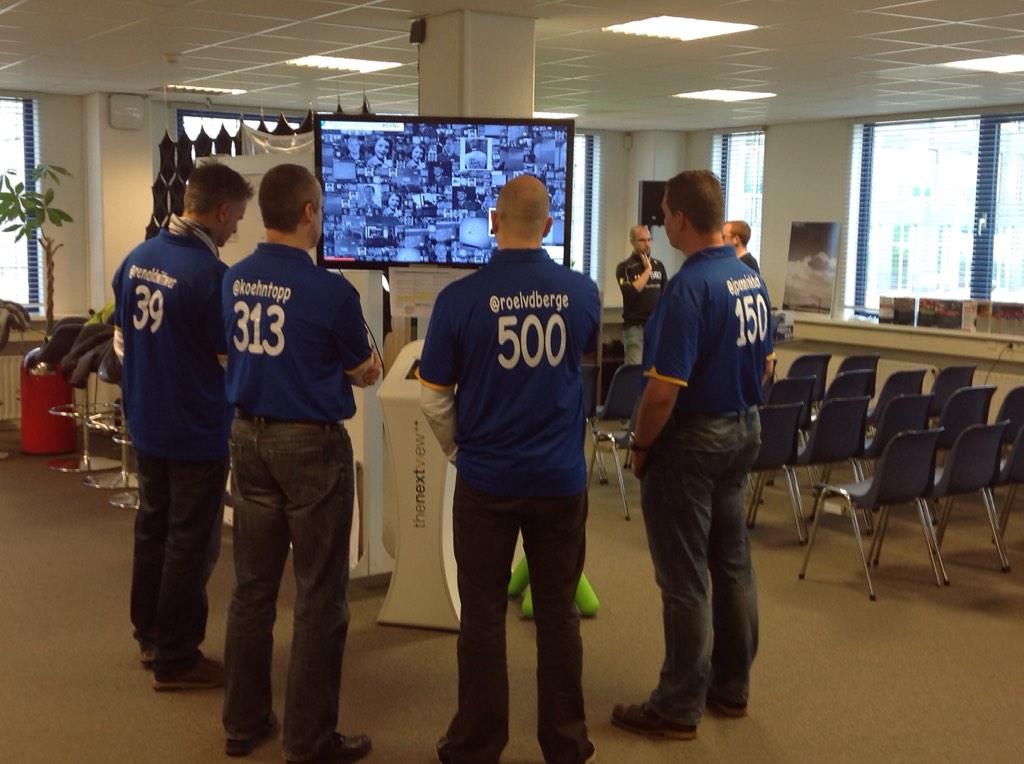 As sitNL was only the second SAP Inside Track I attended I didn’t know so many faces at the beginning of the event. For a newbie like me the SAP mentors shirts where really helpful to map the Twitter names I already knew to some real people. Besides the technical session the possibility to meet and discuss with lots of different people from the community is the main reason to attend a SAP Inside Track.

So what where the hot topis at sitNL? In order to also play with some technology today I downloaded some 650 tweets with the hash-tag #sitNL from Twitter and created some visualizations using SAP Lumira . First, I created a tag cloud showing all hash-tags except #sitNL. The tag cloud shows that discussion and disseminating the knowledge from SAP Teched &amp;&amp; d-code was one main topics. 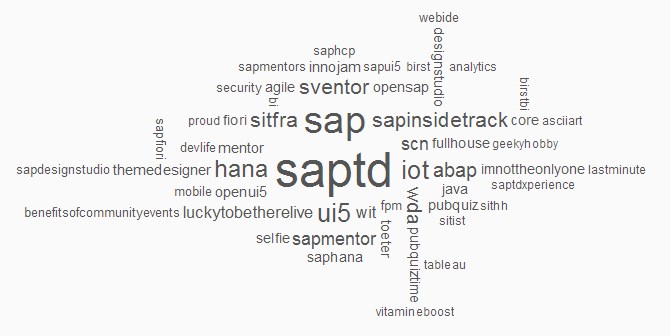 Looking in more detail in at the top 15 hash-tags reveals that the internet of things, SAP UI5, SAP HANA and the SAP Inside Track Frankfurt where other hot topics. Because of the quick and dirty analysis I did with the tweets, the hash-tag SAP hides some other topics that where discussed extensively, the SAP Web IDE and SAP security. 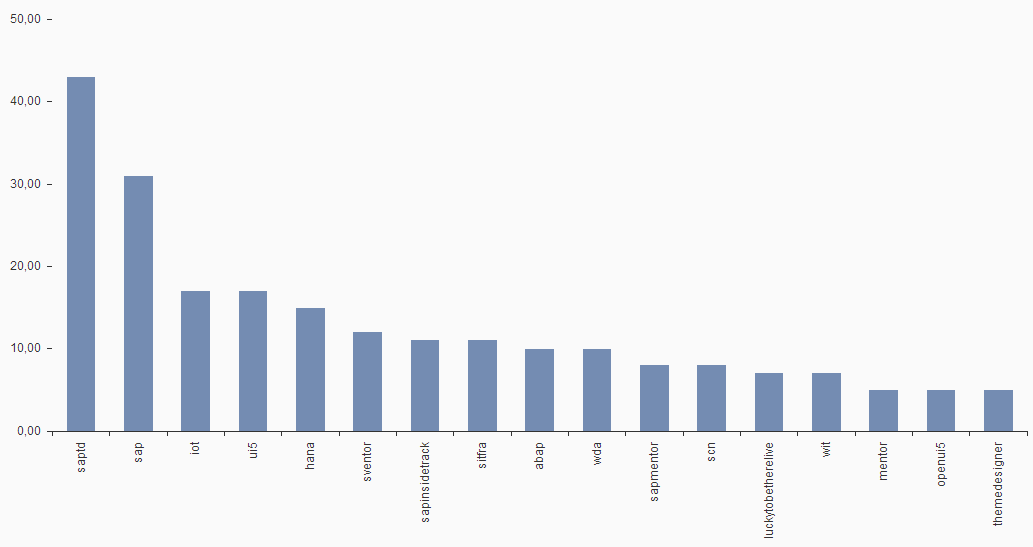 But if you take a closer look on the authors of the tweets you’ll notice, that most of them came only from a few authors. Consequently, you should probably take my analysis of the hash-tags not to seriously 😉 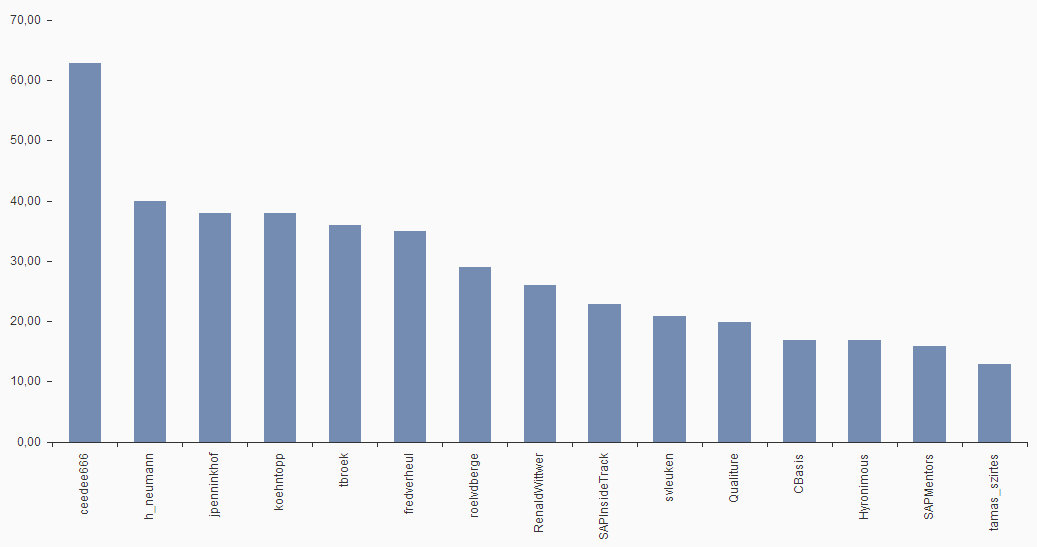 In contrast to Jeroen van der A, who already wrote another nice review of sitNL (A recap of the  the #SITnl), I didn’t attend any of the sessions in the BI track. Instead, I focused on the sessions in the two tech tracks. I won’t give a review of all the sessions I attended here. Each single one was really good in its own right. Instead, I’ll just focus on the few topics and discussions that made the biggest impressions on me.

I really enjoyed the TechEd && d-code recap by Jan Penninkhof. As I, in contrast to about 85% of the listeners, didn’t attend TechEd it was nice to get some first hand impressions and information from it. Jan made two points that I think are very important. First, he pointed out that SAP HANA Cloud Integration is the preferred option to integrate cloud and on premise apps. Which leaves SAP PI as just one of the other possible integration solutions like 3rd party tools or direct connections. He pointed out that if SAP PI isn’t the preferred integration solution any more, there doesn’t seem to be much focus on the Java stack any more at SAP.

The second thing he pointed out was, that the s-Innovations applications might be the new core. This means that s-Innovation apps might replace the classical business suite applications in the future. In my opinion it will be really interesting to see if SAP really will be able to make this shift happen.

Wouter Peeters gave a nice experience report on agile software development in the context of SAP. Besides describing the tooling (i.e. Jira) they are using at his customer for a agile planning and issues tracking he shared his experiences on topics like pair programming and test driven development. He also presented a cool idea to use the eCatt test data container to store the test data used in ABAP Unit test.

Obviously, there were many more topics. Thorsten Franz raised the interesting question in Tamas Szirtes session on HANA native development what libraries and frameworks where readily available for it. How would one, for example, handle the requirement for some kind of workflow engine in the HANA cloud platform. Something that would be quite easy with a classical ABAP stack.

Also there were quite some interesting discussion regarding the pros and cons of the SAP Web IDE in a28 guests session. While Denise was only able to present her session because of the Web IDE (she had to use someone else’s laptop because of some issues with the display port), Robert Eijpe raised some interesting questions regarding the dependencies between e.g. SAP UI5 libraries in the Web IDE and a backend system. How can users be sure the app they developed with the SAP Web IDE will also run with the SAP UI5 libraries available in their backend?

Finally, if you want to know why WAT is never a good name for any product you should have a look at this talk Wat by Gary Bernhardt.

However, the session that really got me thinking was Thorsten Franzs surprise session. He asked the question if communities need trouble makers. I will not try to recite the lively discussion here. Instead I want to add some thoughts from my personal experience. I think trouble makers can really bring something positive to a community. I remember working with different people that might qualify as trouble makers in the sense Thorsten intended. One, for example, was one of my supervisors at university. I don’t know how many times I rewrote papers based on his comments and questions. While this was sometimes tough it forced me to think in more detail about certain aspects an in the end helped to created better results. A similar situation was when I was trying to convince a seasoned ABAP developer of some new framework. The following discussions forced me sharpen the requirements as well as to find an optimal solution for them.

So in summary I think Fred Verheul was right with his closing statement: “Yes, we need trouble makers”.

sitNL ended with a pub quiz hosted by Sven van Leuken. While I managed to get the first round questions wrong several time I nevertheless learned some nice useless facts for this session. I know now that:

After that there was a nice dinner with delicious food from Mrs. Penninkhof. She had prepared the best Som Tam I’ve eaten outside Thailand so far.

So the only thing I can really say as a summary is: see you all at sitFRA in March and sitNL2016.

I'm glad sitnl exceeded your already high expectations. Despite not being a speaker (you'll correct that next time, right?) you certainly contributed to the end result by sharing lots of stuff on twitter, and by joining the discussion in Thorsten Franz his session.

One point you made really resonated with me. The context was: should SAP Mentors prefer the backchannel to give feedback to SAP (since they have that possibility), or discuss matters in the public domain (like SCN)?

My own thinking on this was to use if possible at first the backchannel (and there still are good reasons for that POV), but this ignores the fact that this approach effectively hides a discussion from the wider community. So your plea for more transparency, enabling everyone(!) to contribute to the discussion is well taken. Thanks for that!

One other thing: to do justice to Jan Penninkhof 's argument with regard to Java and PI at SAP: in my opinion Jan meant that, with PI being (one of) the last use case(s) for the traditional NetWeaver Java Application Server, this might well mean that HCI would in the mid- to long term be released for on premise use, which would enable SAP to phase out the NetWeaver Java Application Server (that would certainly be long term 🙂 ). It's most certainly not the end of Java, as the SAP Hana Cloud Platform also has Java as one of its main languages and runtimes.

It will (as usual) be interesting to watch what will happen in the future 🙂 !

Thanks for writing down your thoughts about and experience at sitnl and I sincerely hope you won't skip the 2015 edition...

I'll definitely thinks about a session next time. I'm always a bit hesitating as I mostly work on the "old boring stuff" (CRM, IS-U, everything on premise, Max-DB) and always have the feeling really interesting stuff is happening in new areas (HANA, mobile, Cloud etc). Let's see if I can come up with something interesting anyway 😉

Regarding the Java and PI discussion. If you are right I completely misunderstood Jans argument. Thanks for the clarification. When thinking a little further about it, I get the feeling that the whole language discussion (ABAP only on premise and not in the cloud etc.) actually is the wrong direction. What would be really interesting is if SAP could create some common runtime which would enable different languages to run. Something like MS did with .Net and what is now also happening on the Java platform (JRuby, Clojure etc.). In the past there were some approaches in this direction with Blue Ruby (BlueRuby - SAP Research - SCN Wiki).  However, I haven't seen anything happening in this direction lately.

AFAIK SAP is working on multiple language support, by adding Docker containers to the HANA Cloud Platform. As long as you don't wait for ABAP, it's gonna be fun!

nice meeting you on saturday - great recap and summary.

Regarding the small number of security researchers: first of all, it comes from a percentage, which means there are a few researchers that specialize on security and/or sell tools that try to find these weaknesses, so by reporting a bigger number each the researchers with fewer findings are in the other 50%.
If you find an issue class (like XSS) in a software that has code that goes back > 20 years you will find a large number initially which contributes to the statistic.

You can see a bigger list here: Acknowledgments to Security Researchers - Previous Months (2014 on wards)

Also, I have to mention that SAP's Secure Development Life Cycle is making sure that any new code is likely to have a lot less issues - there are literally hundreds of employees working on security specifically right now - which makes it even more likely that new vulnerabilities are more likely to be found by seasoned researchers.

Thanks for your extensive recap. Great to read that you had a wonderfull time and funny to see the "#Sventor" being part of the #sitNL tagcloud

Thank you Christian for your detailed recap. It was great having you onsite. Really loved your tweet analysis 😉

A recap with pictures and slides is available here: Relive the 6th #sitNL