The practical approach for response time prediction of HANA analytical applications answers the question how the total response time of a HANA dialog step (or a query) would change on a hardware system with more or less physical CPU Cores.

It relies on configuration parameters of SAP HANA to control the number of physical cores that would be actually used for execution of a query or of series of queries, which belong to the end-user dialog step .

SAP HANA implements algorithms which automatically split and parallelize the execution of a HANA query. In this way on stronger multi-core machine the response time of same query is better compared to same query executed on machine with less number of cores.
In reality the queries do not scale unlimited – they have a part which cannot be parallelized, such as, for example, serializing the result set to be send to client, etc. With some queries/requests the sequential part is only a small portion of the execution flow and with others it is a bigger portion.

In SAP HANA Studio navigate to Administration Console -> Configuration view.
The following 4 parameters are related to the parallelization in HANA:

If some property is missing on concrete HANA installation, it has to be added.

In newer HANA releases the trend is that parallelization is controlled only with the parameter max_concurrency_hint. Nevertheless for the time being it is still recommended to set all parameters because of the staged approach for migration to the new consolidated parameter.

The measurements should be done first with the default parameter values, which usually represent the full capacity of the HANA assigned hardware and repeated with the special value-set for simulation of N/2 Cores, N/4 Cores, where N is the number of assigned cores to HANA.

To change the parameter values to just  1 Core, run script:

To change the parameter values to 4 Cores, run script:

Following the same logic, use the configuration parameters to simulate 8, 16… and so on number of Cores. Note that the number of “simulated” cores can be only smaller than the number of really physically available cores. If on machine with 40 physical Cores, the parameters are configured to simulate 160 Cores the results would not make any sense.

Recover the default configuration of the above parameters after the measurements are completed!

HOW TO INTERPRETE THE MEASUREMENTS

Reproducible response time would be achieved only if no other queries are running in parallel and if the full CPU capacity of HANA hardware is available to the measured query at the time when it is executed.

HOW TO PREDICT THE RESPONSE TIME

This would be explained with an example.

A dialog step (or HANA query) is measured with parameter simulation of 1, 2 and 4 CPU Cores simulation, with following results:

Using the 3rd measurements with simulation of 4 Cores for control:

Further the response time with different number of CPU Cores, e.g. with 16 Cores, 40 Cores and so on can be estimated.

This estimation makes clear where is the limit of number of CPU Cores which significantly improve the response time and make sense to invest into from hardware perspective.

In this concrete example, due to specifics of this concrete query more than 16 CPU Cores do not improve the response time significantly and the customers does not need to buy a bigger system, unless concurrent load is expected. 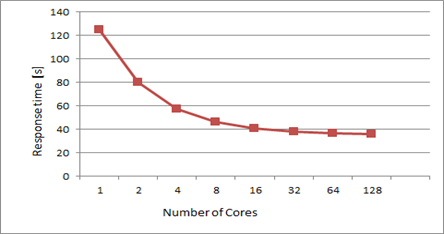 There are queries, for example for aggregates (max, sum, etc.) which scale excellent if appropriate HANA partitioning for high data volumes is used and thus can easily scale to and above 160 cores.

To continue with sizing for concurrent users of HANA Analytical applications, read http://scn.sap.com/community/performance-scalability/blog/2014/11/28/cpu-sizing-for-concurrent-users-running-hana-analytical-applications