Got an error message? The new tool PANKS is here to help you!

Have you ever heard of PANKS?

PANKS is an acronym that stands for Performance Assistant Note and KBAS Search and as its name implies, it’s a new tool that searches for SAP Notes and KBAS from the performance assistant based on the ABAP error code and context.

Whenever you get an error message, the Performance Assistant is there to help you: 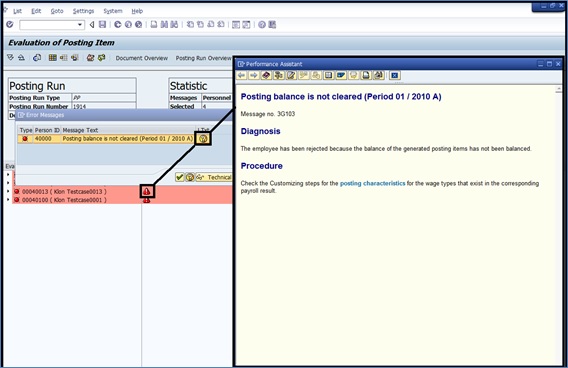 This is the Performance Assistant that comes along with ABAP error messages. 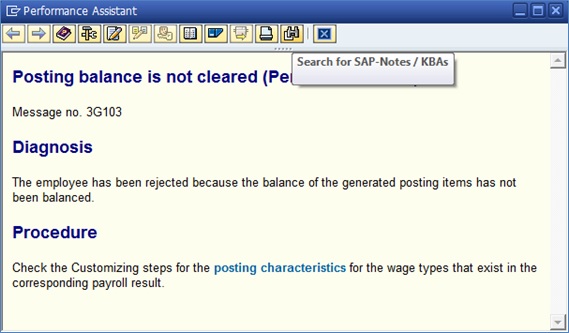 Looking more closely to the Performance Assistant, you will notice there is a new button:

Click on it and you will get SAP Notes and KBAS related to the error code that are relevant to your SAP Netweaver system. In the example 3G 103:

How does PANKS work?

This is the algorithm used by PANKS to search for SAP Notes and KBAS (Source: Note 2020356):

What’s the advantage compared to the info that traditionally provided the performance assistant?

New PANKS makes part of a collection of tools that makes it possible to search for notes and kbas directly from the system where the issue happens:

PANKS will be released with the following SAP_BASIS patches:

Can’t wait for the support packages?

Apply the following note (At present, withdrawn for maintenance, (Thanks for your patience!):

2020356 – Search for SAP Notes in document viewers not possible

If you apply the note manually, take into account that it contains manual steps and that note 2080528 as to be applied as a prerequisite. Note 2094901 is also aprerequisite for release 710.

Special thanks to Natalya Timchouk who has developed the Performance Assistant Note and KBAS Search feature and to Jesús López from our Product Support for his determination to make this possible.

More info on the KBA:

It really a helpful article.

Thanks al  lot for sharing..!!

I could not go thru the OSS, since its not in english..!!

I hope the note will be soon translated.

I'm sorry for that!,

Awesome work! That makes every error message a "self healing issue".

Thanks for the informative and useful information. Just a quick thought: is it / would it be possible to start an ad-hoc workflow directly from a message? For example, if you get the message that you're not authorized to do something, you could start a workflow that informs someone who is authorized about the task - or another workflow to obtain the authorization...

Sounds interesting. That is not a standard functionality as far as I know.

Your idea should be elaborated a bit more In order not to get workflows triggered every time someone gets an autorización deny.

I think it is something you can develop yourself. Only a small repair to the standar function would be needed.

I wasn't thinking about an automated workflow trigger but rather a linkage that allows for a manual (so-called ad-hoc) workflow start. Something like "I know I should have this authority, so let me request it" (preferably already including all SU53 data). This should be possible with a relatively simple assignment table (message class | message number | workflow). Modifying a standard function is not an option, but if there was a BAdI of some kind...

A badi would prevent from repairing the standard. To request the missing authorization you would need another icon, similar to the Note and kbas search because I don't think adding a link in the message long text at T100 (message 00/172) would work.

The note http://service.sap.com/sap/support/notes/2020356 is not yet released.

Once the validity is set the note will be released.

My apologies for this inconvenience.

Strange, I could download it in SNOTE, but during implementation I got the message "SAP Note 0002080528 not released". Sorry. It seems we still have to wait.

Good one. though notes are yet to be released, definitely worth to get it implemented at the earliest.

Nice blog, thanks for sharing.

I already liked ANST. This one looks also a very useful tool.

I'm looking forward to have the note released and download it into our system.

Many thanks for once again empowering us with such innovative and useful tool.

Waiting eagerly to get it implemented in our landscape once the note is released.

To get PANKS working from a message long text displayed in transaction SLG1 or SLGD, apply the following note:

Cheers and thanks for your patience!,

Pay attention, that the table entries for EPSS_TBC* tables are client dependent. So if you test it in the dev system, but in a different client, you need to import these entries to that client first. Same story if you have several clients in the productive system, these entries need to be imported to all of them.

Thank you for your small remark 🙂 . Note 2020356 has been updated, mentioning that EPSS_TBC* tables are client dependent and also mentioning how to change the dependency list of package, (Transactions SE21 / SE80).

Still in the German version, will be translated soon to English.

Thank you Natalya Timchouk once more!.

BTW what should be the correct package for the Text 'HELP_NOTES_SEARCH'? This information is also missing from the note, althought it doesn't effect functionality (in our sandbox system I just used $TMP, because I don't want to transport it from there anyway).

It must be package "SHEL".

Thanks for the quick clarification!

Thanks for sharing this information.. 🙂

For those who couldn't help waiting to the SP and decided to implement the note to get PANSK now.

I hope the following clarification helps:

Some of the manual steps are causing some little trouble: 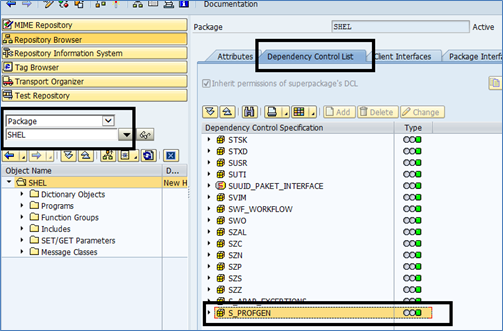 Again an image is better: 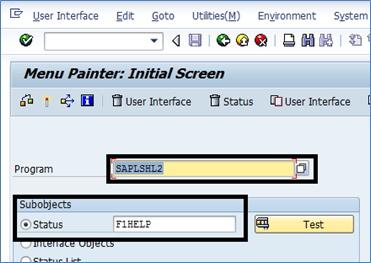 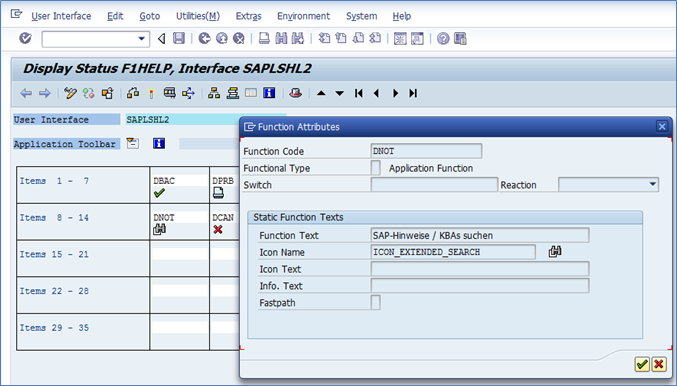 Hi Carlos, Thanks for sharing this great blog.

I Wish we will have this for SAP Business Objects BI Platform.

I have had the word ANST stuck on a post-it note on my desk for further review but I believe this tool replaces that now,  would you agree?

Many Thanks for the tip,  its a cracker

Take into account that not all the errors or bugs involve an abap message. e.g. if the program "calculator" calculates 4 + 4 = 5, theres's no error message but there's a mistake and you may expect an SAP Note fixing it. And the other way around, the presence of an error does not imply a bug that has to be fixed: If you try to calculate 1 divided by zero with the program "calculator" you may get an error message "division by zero impossible" but you won't try to find notes out of it.

ANST uses an ABAP trace to search for notes out of the objects in the trace, That's why it works for any process. On the other hand PANKS searches for notes and KBAS out of the message number and class.

Finally: ANST searches for correction notes whereas PANKS finds KBAS as well (There may exist a KBA explaining why "division by zero" is impossible and how to proceed :-).

Renaud VAN DEN DAELE
January 20, 2015 at 2:20 pm
Hello Carlos, The tool looks great! Can you please confirm that note 2020356 CANNOT BE installed on SP lower than the ones mentioned in the note.  To take an example, if there is SAPKB70208  (7.02 SP08) on the system, it is not possible to install as it expects SAPKB70213 as a minimum to start implementing via SNOTE. Am I right?  Best regards Renaud

Does PANKS require SAP Router connection to be setup both ways (inbound/outbound) so the systems can lookup SAP notes?

the kind of connection that panks requires is the same you use to download notes with snote. same applies to anst. Go to transaction sm59 and configure your sapsnote rfc connection properly if you have not done it yet.

Thanks for sharing, Carlos!

In one of our land scape we are at patch level SAPKB70211, Can we still implement this note manually and get the desired functionality.

Unfortunately your SP level has to be at last 13. Being 11 is not enough.

we have implemented OSS notes 2020356 and 2080528 along with pre and post implementation steps, but after successful implementation, when i test any error message, the new "Search for SAp-notes/KBA'1" button appears but it is greyed out and hence i am not able to see any output.

Please help us to resolve this issue..

Thanks for another excellent tool.

another thing I didn't know until today, thanks for the Info!

Thank you for your article!!!. I already replied on your new blog. (Long story short, KBAs have to be written in such a way that are PANKS-findable).

I hope you do not get discouraged and continue using PANKS and inform us of any flaw you might find in our documentation.

Your experiences are always welcome.

Excellent article, it helped me a lot to write this summary of automatic SAP Note search tools: https://www.linkedin.com/pulse/automated-sap-note-search-quicker-incident-resolution-tam%C3%A1s-holics