My name is Matan Mizrahi, and I’m a software developer in the SAP Enterprise Portal group.

In the past few months we have worked really hard to adjust the Ajax Framework Page (let’s just call it AFP) to run on Internet Explorer in standards mode.

For those of you who don’t know what “standards mode” is, I will try to make it as simple as possible. However, if you want to know more, I strongly recommend reading this blog , written by my colleague Maya Amit.

Microsoft Internet Explorer (MSIE or just IE) was the dominant web browser (alongside Netscape Navigator) in the early days of the internet as we know it. Web pages were built in such a way that IE could render them in its own way, without following the standards rules for the HTML web language.

Later on, when other standards-rendering browsers (like Google Chrome and Mozilla Firefox) came into the market, Microsoft began to understand the need to support standards mode rendering. Therefore , in March 2009, Microsoft released Internet Explorer 8, which adhered to the rules of the standards rendering, alongside the “old” rendering mode, called quirks.

So far some history and useful information.

Up until now, AFP could only run in quirks rendering  mode. And – as you can see on Maya’s blog , SAP introduced UI5 based apps, which cannot run on quirks rendering mode, therefore we had to find a solution for those apps, which was a standalone portal page (AKA navMode 10, or “Display In separate headerless portal window(standards mode) – read more about it here, and more about other navigation modes in note 2054208).

The problem was, that when you wanted to open a SAPUI5 application, you couldn’t open it in your portal, which is probably the most convenient way.

Now , after a lot of work, we’ve managed to fit AFP to render properly in standards mode. Now you can navigate through your portal without having to open new windows,and enjoy all benefits of SAPUI5 applications, integrated in your portal.

AFP in standards mode is supported in IE starting from IE9.

It’s very simple. You now get a new framework page, dedicated to AFP in standards mode: 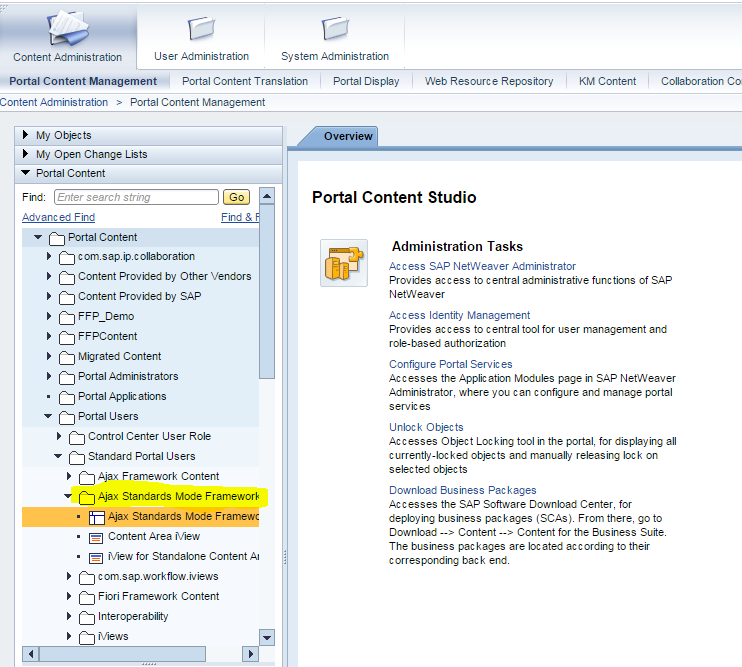 All you need to do is enable this framework page in the Master Rule Collection:

There you’ll see that we’ve added a new URL alias, called standards. You can use it for the configuration of the new framework page,and of course you can create one of your own. 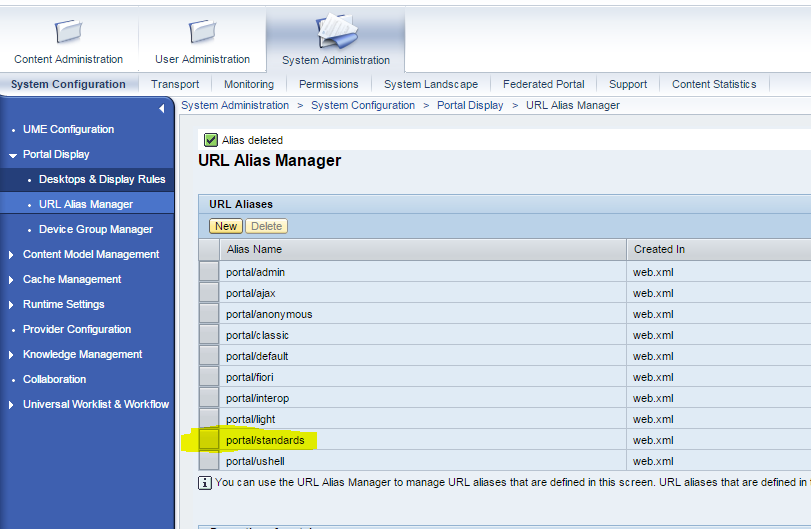 and add the rule you like. You can add it to a specific user, alias,group ,role and so on.

Here’s one example, but you can read more about the Master Rule Collection here and here

Then search for “Location” :

That’s it! You’re all set and ready to use the AFP in IE standards mode.

Notice that you might see some slight differences between the same themes used in AFP quirks mode and standards mode.

Feel free to ask questions, comment or send any feedback.

Notice that if you are using this feature, your page will be rendered in standards mode, which means that content that runs in quirks mode(HTMLB for example) won’t be able to run in the content area. To resolve this, you can use nav mode 3 (I mentioned earlier a reference to nav modes).

I tested this new Feature in a brand new 7.4 SP9 Installation. When opening the Portal Content, my IE11 hangs with CPU going to 100% for about one minute, I think this is a JavaScript-Rendering-issue. The same issue after every click!

I use the following IE11-Version:

Has anyone the same problem ? It works fine in Quirks-Mode or with Firefox and Chrome.

P.S. I also realised that the WebPageComposer (WPC) is not working in standards mode.

Note that the standards mode is not supported for administrative scenarios, as mentioned in note 2001910 - AFP Standards mode support.

Thanks Matan, this is a change in the right direction. Regarding AFP standards mode not being supported for administrative scenarios, will it be at some point? What about KM, etc? I guess it's a reasonable workaround to use different URLs for end users and admins.

The Enterprise Portal , together with HTMLB and KM, are now processing the supportability options for IE in standards mode.

But this is more like just a big limitation for Admins.

AFP standards is not supported for administrative scenarios.

See my replay to Samuli.

This is a great step by AFP, need of the hour. Hopefully the admin mode is supported soon.

Hi Sandip,
No, it won't be available on 7.4 SP07. SP7 is released already and downporting this major development has a lot of risks, thus cannot be delivered through a patch.

I liked your explaination about quirks vs. standard.

A very good information.. and relief, but we are still having few rendering issues with SP14 standards framework as well.

Did you manage to solve those issues?

If not, have you created a message for them?

1. On My Team lane - we have scrollbar but thats not moving completely down.

I have opened thread-

2. When we expand the My Team, the People are not visible. we have already raised a sap note but no response on it:

Nice blog, thanks for sharing!

I have a custom frameworkpage and the docmode is set to edge. Everything runs smooth now, except new browser windows (tasks from the universal worklist as an example). They are started in quirks mode, not in standards mode. Any idea where I should look at?

As i mentioned in the blog, navMod 10 opens in standards while navMod 3 opens in quirks.

Some pages were opened not via my custom frameworkpage, but thru standard Ajax frameworkpage. I have changed the settings for these standard fw (yes, I know changing the standard 😛 ) and it looks like it works now.

Also a patch of EP_RUNTIME was required. NavMode = 1 checks the docmode of the parent and inherits it.

I am having the same issue.

Any help is appreciated.

seems to be a good news that standard mode is finally supported by the portal.  We just upgraded our Pilot Portal in 7.4 SP9 and we use it with IE9... 😥

We have issue with Content Management and with (Content Administration -> ) KM Content that use tree layout set.  They could be considered as admin tool (?) but we also use Tree Layout set for our end user KM iView.  And it is not working.

I'm not using IE9 compatibility view and I checked some note, but any idea for this ?

The KM documents,KM document content menus are not loading in Ajax standard framework page.Do we have a solution  ?

I am part of the KMC UI development team and I can assure you that we are working on that goal together with the HTMLB framework team, which KMC UI relies on.

is it already available?

We are in a testing phase currently and expect it to be available in Q4 2016.

any update on this ?

We have a custom framework page that has Browser Document Mode set to IE=edge working fine in NW 74 SP02, then SP05, SP07, but it is now being ignored in SP09 with the latest patching level 18.  The entire portal is now rendered in "Emulate7" mode!  What could be wrong?  It seems like a potential bug on the SAP side as it seems that the Browser Document Mode of edge is simply being ingored.

Is your custom framework page is using HTMLB UI components? based on which framework you created yours? Classic? AFP?

The original copy of the framework page was based on AFP, but I've since tried making new copies of all the framework page and none of them work with my custom framework component.  Our custom solution uses 100% Java Portal components, no HTMLB, no BSP, nothing other than java and jsp.

Do you have anything particular in your custom component that could interfer with the standard AFP?

Please check out the fwp used, open it, check what the iview Document mode tells you. There might be a standards mode fwp also, I am not sure when that was released for 7.40.

We don't have anything in particular that would interfere with the standard AFP as far as I can tell.  The page worked fine in NW74 SP02, SP05, and SP07, and only stopped working in SP09.

I do now have a workaround for the issue, but am still hoping to get a proper fix from an open SAP message.  I followed this blog:

And used it to add the IE=edge meta tag directly, which fixes the issue.

Any concerns with using this workaround?

I try the standard mode, but SAP KM iviews are not working and a button appears in some  pages and iviews. is it normal? I tested in NW 7.3 SP 17.

May be check this note:

This is great information, thank you all for your hard work on this issue.
However, do you have a plan to enable the classic framework to work in 'Standard' mode as well?

Thanks for the useful blog.we upgraded the portal from 7.0 to 7.5 and

using AFP  , we are unable to run the content in Portal content Area. I followed your blog. and

changed the desktop to AFP standards as mentioned but still the problem persists.

I am not sure why AFP standards are ignored in portal. Please let me know if this issue addressed in

Portal 7.5 and the Workarounds if any.