Aka: What to do when the Properties window of SAP Business Objects Dashboards isn’t visible.

This post originally appeared over on my wider blog at Random Thoughts – Information Architecture, Databases and Business Intelligence, but given the topic I thought I’d post it here as well.

Having had this happen to me three times now on three separate laptops, and also having spent, and lost, countless hours looking (largely unsuccessfully – until now) for a way to remedy the situation I thought this one deserved a blog post. So here goes. Hopefully the next person who strikes this problem can solve it with a five minute Google rather than a five hour session of window movement and software uninstalls and re-installs.

My problem originally occurred with SAP Business Objects Dashboards 4.0. I’d been happily working with the product for about a year with no problems until one morning I plugged in my laptop and opened up an existing dashboard to find that the Properties window was nowhere to be seen. No matter what I did I couldn’t make it visible. I tried everything I could think of:

All of these were tried (several times) but to no avail. Next I bit the bullet and tried re-installing the software. Several hours later I found that the Properties window still had an extreme case of shyness and wouldn’t show up on my screen.

Luckily, not too much later, I was in line for a laptop update so when my laptop arrived with a fresh install of the Dashboards software all was fine once more – the Properties window was no longer hidden……….at least for about three weeks when the problem re-occurred. Faced with this situation I did what any good manager would do and gave the dashboard work to someone else to take care of.

A week or so ago I moved to another new more portable laptop and installed SAP Dashboards 4.1 on it. Hardly daring to look, I opened up my first dashboard, and ………….. joy of joys – I had a Propertieswindow once more. Or at least I did until this evening.  It was there when I left work at 6pm, but not there when I logged back on to my laptop at 9pm. Facing a looming deadline to publish some new corporate dashboards and with no more budget to change laptops again I decided to dive into the Registry.   I found the key that sound about right, exported it for safety,  and started flicking through each of the sub-keys looking for anything that sounded like it might be about window positions, toolbar settings or last saved details. After numerous failed attempts to reset values in keys that looked to fit the bill, and urged on by the dulcet tones of Peter Gabriel, I pulled out the sledgehammer and deleted all of the sub keys under the settings key. I figured / hoped that they would be rebuilt next time I opened the Dashboards tool and I’d trigger a reset to factory settings type operation by brute force. With fingers crossed I re-opened Dashboards, and there it was in all it’s glory – the Properties window: 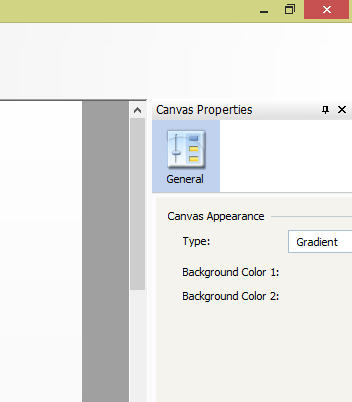 So, should you find yourself unable to make the Properties window show itself fire up Regedit and navigate to HKEY_CURRENT_USER>Software>SAP Business Objects>Dashboards>Settings>en 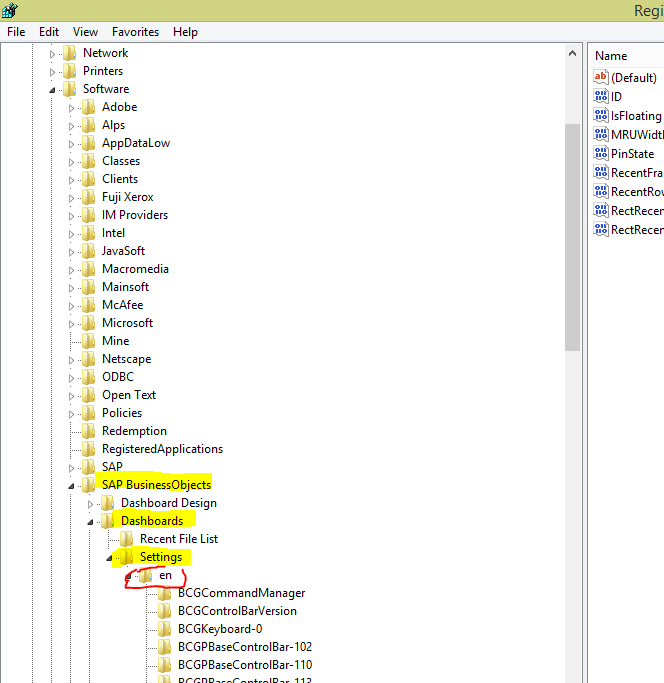 From there delete every subkey under en. Don’t delete the en subkey as well, as that seems to render Dashboards unable to start. 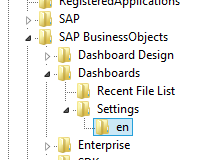 I’ve tried to identify the specific subkey that needs to be deleted, but with no luck. But that doesn’t seem to matter as deleting them all fixes the problem and doesn’t seem to have any nasty side-effects.

This works for a Dashboards 4.1 system and I suspect it would also work for Dashboards 4.0 and probably even for earlier XCelsius versions too.

If anyone else has experienced this problem and has figured out what triggers it, I’d love to hear from you!